Our Portfolio Performance from January 1st to March 31st 2021

On 7th of January we released a short summary of all our portfolio companies and why we like them for 2021.

Today we have put together a “report card” on how our portfolio companies performed in the last calendar quarter (1st January to 31st March 2021).

We cover what each company has delivered, how the share price has performed and what we expect to happen next for each of our portfolio companies.

Since we introduced our portfolio model in May 2019 we have taken positions in 19 carefully researched small cap ASX stocks that we closely follow long term.

We seek to invest in stocks that we think will return 1,000% plus gains and that we are comfortable to hold a position for 3 to 5 years.

The only new company we have added to our portfolio in the last quarter was Oneview Healthcare (ASX:ONE). However, we do expect to add at least one new investment in the next three months.

Our model is to carefully research and select only the best quality companies and management teams, and then introduce these companies to the Next Investor audience - this model only works if we deliver long term performance.

For every investment in our portfolio we write research and commentary including:

Here is our Jan 7th summary of all our portfolio companies and why we like them for 2021.

Here is how each of the portfolio companies performed in Calendar Quarter 1 (January 1st to March 31st 2021) including new addition Oneview which we start performance data from March 12th when it was added. 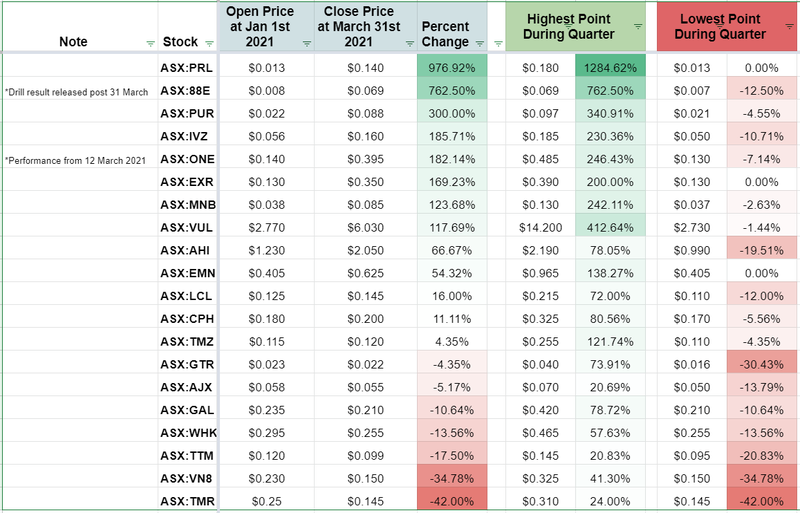 Below is a recap of key events that have happened with our portfolio stocks since January 1st to March 31st.

For each stock, we will cover:

✅ PFS. In January VUL released its PFS which shows an after tax Net Present Value of €2.25 Billion (AU$3.55BN) - much bigger than expectations.
✅ Gina Rinehart Invested. VUL raised $120 million, with Australia’s richest person and famous mining magnate Gina Rinehart corner-stoning the raise.
✅ Three major Board appointments. VUL added a senior German chemicals industry executive, a Senior Director with the European Union Transport and Environment (T&E) who was instrumental in shaping policies around EU vehicle CO2 standards and sustainable batteries and a former Tesla executive to provide consulting services to Vulcan in relation to the lithium market, battery supply chain and offtake.

📋 About: Developing a Green and European source of ultra high purity manganese for Electric Vehicle batteries developed from the recycling of a tailings deposit located in the Czech Republic.

📋 About: Exploring for natural gas on the Mongolian-China border to replace burning of coal for energy in China.

📋 About: Accessible yet advanced human imaging via smartphone app for health, fitness and wellbeing.

🌏 Macro Theme: Health Tech will continue to be focus of big tech like Apple, Google, Amazon. A global pandemic has seen significant growth in online, telemedicine need and acceptance.

✅ Name and code change from MYQ to AHI.
✅ Added an X-Factor. AHI has loaded up with several senior executives ahead of its NASDAQ listing, including its Global Chief Business Officer based in the US, who led the digital transformation of Fox Broadcasting and launched online voting for hit series such as American Idol and The X Factor.
✅ Tinjoy agreement. Tinjoy has a captive audience of over 28 million consumers within China and will integrate AHI’s CompleteScan into its “WinScan Digital Health Platform” (WinScan).
✅ Biomorphik App. The Biomorphik App integrated with MyFiziq’s technology was released to Google Play and Apple Store.

📋About: Gold Exploration in Colombia.

🌏 Macro Theme: Gold price will rise as a store of a value in a low interest rate environment and high stimulus global economy.

📋 About: Exploration and development of a phosphate (fertiliser) project in Angola and training local farmers to increase crop yields.

✅ Long term mining title granted. The Angolan government has approved its long-term mining title - renewable for up to 35 years. It usually takes 3-5 years to get a long term mining title licence, but it took MNB less than two months.
✅ Adopted global ESG standard. MNB’s ESG goals open it up to ESG focused investors. MNB’s goals are to improve food security and nutrition, decrease levels of poverty and mitigate the impacts of climate change on farmers.
✅ Raised $7.3M. Funds raised are being used to further its DFS activities for its Phosphate Project including derisking.

📋 About: Gold Exploration in Canada and Ecuador.

🌏 Macro Theme: Gold price will rise a store of a value in low interest rate and high stimulus global economy.

✅ Announced bonanza grade gold. Anything above 5 g/t is considered high grade, but 34 g/t Bonanza grades are a whole other level. TMR’s lab results returned well above bonanza grade. The best result was 5 meters at 61.3 g/t including 1.5m at 186 g/t.

📋 About: Oil Exploration in Alaska.

✅ Several potential pay zones hit. However operational issues prevented hydrocarbon samples from the two most prospective zones. Sidewall cores confirmed the presence of oil previously observed in cuttings.
✅ Wild share price ride. 88E’s share price rose from 1 cent to over 8 cents, with a market cap of over $1BN, on speculation of the drill results.

🌏 Macro Theme: Silver historically trails gold price movements and is poised for a run this year after being undervalued in 2020. Silver is seen as a hedge against inflation which the market predicts as becoming an issue due to increased money supply.

✅ Commenced 2021 drilling program. In January, TMZ commenced the first of its drilling programs in the Lachlan Fold Belt in New South Wales.
✅ Eyes 100 Million oz. Silver Equivalent Resource Base. Taking a 70% stake in a gold-silver project which has a 23 million ounce resource as it targets a 100 million ounce resource base.
✅ Successfully tendered for the Texas silver project in Southern Queensland. This will further increase TMZ’s resource base.

🌏 Macro Theme: Nearby companies are expected to be releasing drilling results too, positive results will be positive for all the Julimar players. Precious metals continue to perform well.

✅ Highly promising survey results. Recently released survey results bode well for upcoming drilling at its WA-based PGE-nickel-copper.
✅ Applied for two exploration licences. Extending its footprint and already has taken up most of the ground in the Julimar province, where Chalice made its billion dollar discovery, leaving limited options for other companies to take a position.

🌏 Macro Theme: Green Hydrogen is arguable the fastest growing and most talked about emerging area of the global economy as the world turns to green, carbon free energy and transportation.

🌏 Macro Theme: 5G capable devices and infrastructures to roll out into the market, which will boost the transition into the ‘Internet of Everything’ network of people, processes, data and things.

📋 About: Health tech company that provides hospital patients a “virtual care and digital control centre” at their bedside to deliver the best possible patient experience during their stay.

🌏 Macro Theme: Health Tech will continue to be focus of big tech like Apple, Google, Amazon. A global pandemic has seen significant growth in online, telemedicine need and acceptance.

✅ We added ONE to our portfolio at the beginning of March as our "Tech Pick of the Year". Find out the top 10 reasons why we invested.
✅ ISO 27001 certification. The certification is a huge milestone for ONE and allows ONE to assure its clients and other stakeholders that their information is safe and secure.
✅ Launched the world’s first and only cloud-based care experience platform for hospitals. ONE’s new cloud offering is going to turbocharge growth of new hospital clients, hospital beds and recurring revenue for ONE.

🌏 Macro Theme: World regulations are expected to open up as cannabis and psychedlics become an accepted form of alternative medicine.

✅ Raised $18M. Strengthened balance sheet via a placement of shares at 19c.
✅ Entered the psychedelics market. CPH was the first ASX listed stock to acquire 100% of a psychedelics company.
✅ Continued Purchase Orders. CPH contine to sigh Purchase Orders which will help with building a stable reveneue base.

📋 About: Nickel explorer in the Fraser Range of WA.

🌏 Macro Theme: Analysts are generally expecting tailwinds for the nickel price due to increasing demand from the electric vehicle industry. The World Bank predicts that Nickel demand is guaranteed to increase by some of the most dramatic figures by tonnes.

🌏 Macro Theme: Whole nations are now under the threat of cybersecurity attacks. The global cybersecurity market size is forecasted to grow to US$248.26BN by 2023 by 2023.

📋 About: Develops environmentally-friendly flame retardant chemistries for many fabrics, including synthetic-rich fabrics, in the textile industry.

✅ Cash receipts up by approximately 30% to $2.2 million on a quarter-on-quarter basis in January.

📋 About: Gold development and exploration in Ecuador.

🌏 Macro Theme: Gold price continues to fluctuate, but remains steady and is still expected to rise to above $1900 - a strong price for gold explorers.

📋 About: Uranium exploration in the USA.

🌏 Macro Theme: Uranium in the USA will form part of the Joe Biden’s clean energy policy, including localisation of Uranium supply.