Province Resources Ltd (ASX:PRL) has engaged Next Investors to provide this service.

What does PRL do?

As the world looks to cut its greenhouse gas emissions, green hydrogen may prove to be a major building block of a net-zero economy.

Industrial applications and large transport (like buses and trucks), and heavy industry applications like steel mills are the most likely candidates to start using this technology in the near future.

Why did we invest in PRL?

Ideal location for the project

PRL's project is located in the Gascoyne region of WA, next to the town of Carnarvon. Gascoyne is a particularly sunny and windy area (ideal for green energy support) and coastal (important to build a hydrogen plant to undertake hydrolysis). The town of Carnarvon also has a gas pipeline.

Australia is aiming for net zero emissions by 2050

With particular targeted investments in hydrogen and we think PRL can be part of the solution.

PRL has a pathway to financing through their potential joint venture partner Total Eren.

What do we expect PRL to deliver?

Secure land tenure and key stakeholder support for the project, including a Heritage Agreement, Environmental Impact Assessment and other necessary permits so that the project can proceed.

With a Scoping Study, land tenure and stakeholder support, the start of the PFS would enable PRL to get to work on understanding the specific factors needed in development to deliver an economic green hydrogen project in WA.

With PRL announcing the completion of the scoping study on 2nd March 2022, we next want to see PRL solidify its commitment from Total Eren to further develop the project.

Total Eren decides that after the Scoping Study has been completed that the project is not economically viable, and as such, chooses to abandon the project.

Hydrogen is a very new technology, and there are currently limited uses. Hydrogen is not easily transportable, it is extremely flammable and has also not been adopted on a large scale. If the hydrogen market doesn't materialise, PRL may struggle to secure financing for its project - and sell its hydrogen at a commercial scale.

If PRL can't secure the key permits for the project to go ahead (including heritage agreement, environmental impact assessment and the new development permit). This risk is increased for PRL because there are no regulations that exist for hydrogen projects, and governments will need to update laws to fit this emerging market.

PRL is our second biggest holding behind Vulcan Energy Resources (ASX:VUL). PRL has delivered several impressive announcements since February and is up over 500% since we first invested over 12 months ago in August 2020.

After PRL delivered a number of material announcements and rose over 500%, we sold a portion of our holding to recoup our investment outlays.

We intend to hold our position now until the results of the Scoping Study are announced and re-evaluate our investment plan from there.

Disclosure: The authors of this investment memo and owners of Next Investors, S3 Consortium Pty Ltd, and associated entities, own 24,000,000 PRL shares at the time of publication.

Our Past Commentary on Province Resources Ltd

Today, our green hydrogen Investment Province Resources (ASX:PRL) announced that it had secured an additional 1,035 square kilometres of land south of Carnarvon, WA.

That’s equivalent to a roughly 25% increase in the company’s licenced land area, bringing PRL to a total of 4,162 square kilometres under licence.

We think it adds further momentum behind the proposed HyEnergy® green hydrogen project in WA as PRL negotiates the shareholders agreement with Total Eren.

In our last note on PRL, we argued that the scale of PRL’s project is akin to the $34BN North West Shelf Joint Venture which made Woodside what it is today - a $67BN market capped company.

Obviously there’s a long way to go for the $100M capped PRL and a number of risks, some of which we outline in our PRL Investment Memo.

But we’re hoping with history as a guide, PRL can go on to play a major role in Australia's energy transition.

What’s next for PRL? Convert the binding key terms from late August into a comprehensive legal document that will govern the running of the new joint venture entity

Australia - “the new Saudi Arabia of green energy and minerals"?

One thing that stands out from the following AFR article is the singling out of Australia as a potential future energy superpower.

For some context, Australia represents 0.32% of the world's population and ranks 13th when measured by gross domestic product (GDP) - the point being Australia is tiny on the world stage.

For the COO (Mr Patrick Lammers) of a European utility company to publicly say that Australia has the potential to be a future global superpower in the energy industry and "the richest country in the world" is big praise if you ask us.

Mr Lammers comments specifically touch on the potential for Australia to produce and then export green hydrogen to the world.

We have long held the view that Australia's access to abundant natural renewable energy resources, including solar and wind power, uniquely positions it to produce the cleanest form of hydrogen - green hydrogen.

Mr Lammers agrees with us, saying Australia is "one of the best geographical places, geopolitical places" to produce green hydrogen.

To see why we are Invested in PRL, the key objectives we want to see the company achieve in 2022 and the key risks to our Investment thesis, check out our 2022 PRL Investment Memo here.

This morning Prime Minister Anthony Albanese addressed the Sydney Energy Forum with a 26-minute speech about the future of the energy industry in Australia.

One thing that stood out to us was his remarks concerning the hydrogen industry. As you can see in the clip below, he said that the Australian government “see enormous potential in hydrogen”.

He added that “Australia has all of the ingredients needed to become a major hydrogen producer and exporter [...] with over 91% of hydrogen production planned being green hydrogen”.

He also stated, “we have plans to establish hydrogen refuelling infrastructure to support the next generation of heavy vehicles right around the country”.

Clearly, the Australian government is taking the hydrogen industry seriously and has big ambitions to make Australia a hydrogen superpower on the world stage.

We have long held the view that Australia’s access to abundant natural renewable energy resources, including solar and wind power, uniquely positions it to produce the cleanest form of hydrogen - green hydrogen.

As a result, we are Invested in Province Resources (ASX: PRL), which is looking to develop Australia's first truly zero-carbon, green hydrogen project.

To see why we are Invested in PRL, the key objectives we want to see the company achieve in 2022 and the key risks to our Investment thesis, check out our 2022 PRL Investment Memo here.

The following Bloomberg article looks at a Bill Gates backed investment in the hydrogen mobility space.

Below are our key takeaways from the article:

In summary, the article speaks to the volume of capital pouring into the downstream technologies that are required to build up a sound and efficient hydrogen supply chain.

For hydrogen to become a part of the energy mix the infrastructure required to produce, transport and then consume it all needs to be developed to the standards of current energy technologies.

With institutional capital and big names like Bill Gates now making investments into the hydrogen space we think it is a matter of WHEN not IF for the hydrogen sector.

Historically, our best performing Investments have come from industries where we have Invested well ahead of institutional capital arriving on the scene. Our Investments in the green hydrogen space are no different.

The following companies held in our Portfolio provide exposure to an industry that we think is on the cusp of exponential growth:

PRL also confirmed that it is “continuing discussions with pastoralists, local government and other stakeholders to finalise tenure for the project”.

Securing land access arrangements can be a big hurdle to overcome given the large land footprint a project as big as PRL’s would be situated on. Effectively, without the support of key stakeholder groups, there would be no project to develop.

What’s next: We are watching to see PRL execute its Joint Development Agreement (JDA) with Total Eren which is now due by 31 July 2022.

Bill Gates “Green hydrogen would be massive for clean energy”

The following LinkedIn post from Bill Gates shines the spotlight on green hydrogen as a technology solution for a transition towards cleaner fuel sources.

When major investors start to talk up a particular technology it is generally a leading indicator for massive institutional capital flows into the sector. And Gates is not just a commentator, but an investor in renewable energy and the transition towards lower emission fuel sources.

(Here is an article on one of Gates’ latest ventures in the space: Bill Gates-Led Fund Backs Startup With Cheaper Way to Move Hydrogen)

For a long time institutional investors have avoided making large scale investments into the green hydrogen space, but that now looks to be changing extremely rapidly.

Historically, our best performing Investments have come from industries where we have Invested well ahead of institutional capital arriving on the scene.

Our Investments in the green hydrogen space are no different. We tend to agree with Bill Gates, that green hydrogen has a place in the transition towards clean energy technologies.

The following companies held in our Portfolio provide exposure to an industry that we think is on the cusp of exponential growth:

In a sign of growing momentum behind green hydrogen companies, like our investment in Province Resources (ASX:PRL), Twiggy Forrest’s Fortescue Future Industries has signed a major green hydrogen deal in Europe.

The hydrogen would be produced in Australia and then shipped to Germany - part of the country’s rapid shift to renewables amid an energy squeeze brought on by the country’s reliance on Russian gas.

Forrest flagged that the project would be “a minimum $50 billion expenditure.”

Given the large numbers involved in projects of this scope, there’s a vibrant debate around whether green hydrogen is viable.

We’re of the view that green hydrogen IS a viable part of the energy mix going forward, particularly as electrolyser costs come down.

Electrolysers are a type of equipment that uses electricity to split water into hydrogen and oxygen.

In the context of this technological progress, we’re pleased that PRL has delivered the scoping study we wanted to see so far this year: 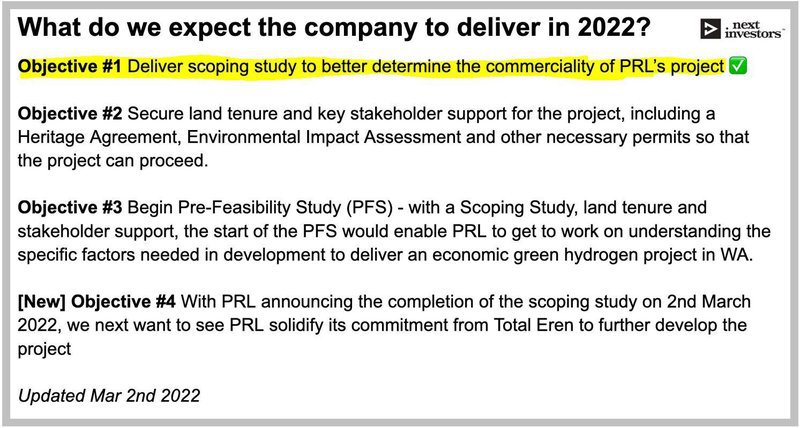 Here’s why we invested in PRL.

What’s next: We want to see PRL’s partnership with Total Eren solidified in the form of a Joint Development Agreement.