Disclosure: The authors of this article and owners of Next Investors, S3 Consortium Pty Ltd, and associated entities, own 24,200,000 PRL shares at the time of publication.

S3 Consortium Pty Ltd has been engaged by PRL to share our commentary and opinion on the progress of our investment in PRL over time.

Today, the WA Government announced a proposed change to the laws that help provide a clear path for PRL (and other green energy projects) to secure the necessary approvals for development.

This substantially de-risks the permitting element of PRL’s project, and will likely be looked favourably upon by potential financing partner Total Eren as the two parties progress the Scoping Study that was announced in April 2021.

Key to the legislation is that “Traditional Owners remain key stakeholders in renewables projects”.

PRL has spent the last nine months engaging with communities and traditional owners in the Carnarvon region of WA (where project is located), and we think PRL will be well placed to secure key deals like ‘Heritage Agreements’ that are necessary for the project to eventuate.

PRL has already secured a ‘Section 91’ licence, which allowed it to access the project area to commence environmental, heritage and geo technical survey work.

We think more permits could be coming, but this announcement by the WA Government provides an added measure of legal certainty necessary for PRL to move forward with the project.

We, and the broader market, are eagerly awaiting the results of the Scoping Study with Total Eren, which we hope to be completed soon.

Today’s announcement from the WA government takes place within the context of developments out of the global climate summit, COP26, that concluded in Glasgow Scotland last week. COP26 was a catalyst for increased media attention for green hydrogen projects.

Below we provide a quick overview of some of the media coverage that we think might have got the PRL share price moving last week, plus the key details from today’s announcement by the WA government.

Why are land rights important to PRL?

The proposed changes to WA legislation announced today provide the option for PRL to pursue a different type of lease called a ‘diversification lease’ which importantly may provide PRL the ability to locate wind turbines, solar arrays and hydrogen production assets on the land PRL is seeking to use.

According to the media statement from the WA Government “the proposed amendments are part of a package of reforms... [are designed to] cut red tape and streamline tenure approvals (sic)”.

Land rights are like a big layered cake, there are lots of parties involved, with different interests. 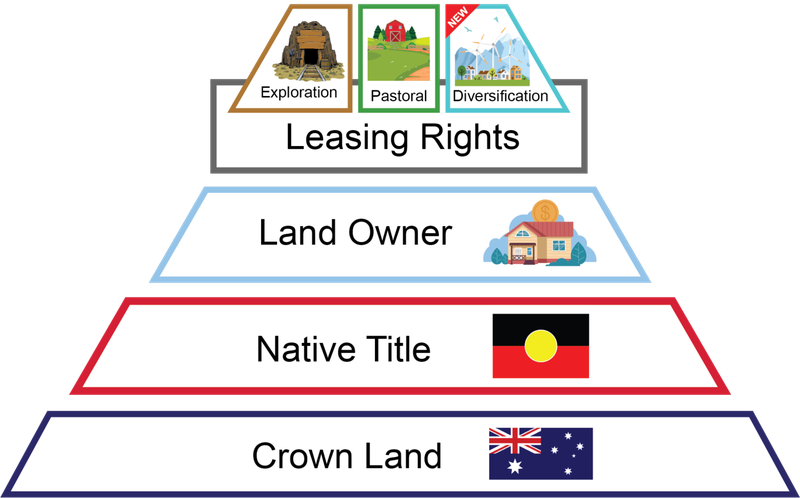 In order to secure the necessary heritage agreements, environment permits and development permits PRL will need to carefully navigate each parties interest in the land.

Outside of an exploration licence, which PRL has secured, there were previously limited means for PRL (or any other hydrogen company) to secure its interest in the land for the construction and development of a green hydrogen project within the current laws.

So for WA to establish a new tenure regime for green hydrogen developments, which delivers greater certainty for where upstream renewable power generation assets and downstream hydrogen production assets are located, is a great outcome for PRL.

In our eyes, the project is NOT an exploration project, as PRL is not ‘digging for minerals’ underground, rather it is an infrastructure project, where wind turbines, solar arrays will need to be built.

Our opinion was that this was a big risk point for PRL, and its financing partner Total Eren, but with the new proposed laws, a lot of that risk has been mitigated.

You may remember in June that a different company’s plans for a $36BN wind, solar and hydrogen project in the Pilbara region of WA was rejected on environmental concerns.

This was a warning for PRL investors not to dismiss the importance of permits as a key risk hurdle for the project.

Now that the WA Government has provided a clear pathway forward, it will provide PRL and Total Eren with the legal certainty required for development.

PRL is our Small Cap Pick of the Year for 2021 - As we’ve covered before, PRL still faces a number of hurdles at this early stage and there are a number of elements of risk involved in the project.

These include but are not limited to securing further government and community support, the outcomes of its Scoping Study (which we are eagerly anticipating), and the commercial viability of its project.

The positive outcome for PRL takes place within a broader context - namely the increased media attention on reducing emissions in Australia and setting up a market for hydrogen energy.

On 10 November, we saw a significant move in PRL’s share price out of its recent trading range.

Around the same time, some pertinent developments came out of the COP26 global climate talks in Glasgow, Scotland.

The primary one being Scott Morrison announcing $1B (US$738M) in funding to fast-track emerging low emissions technologies which made AP’s front page: 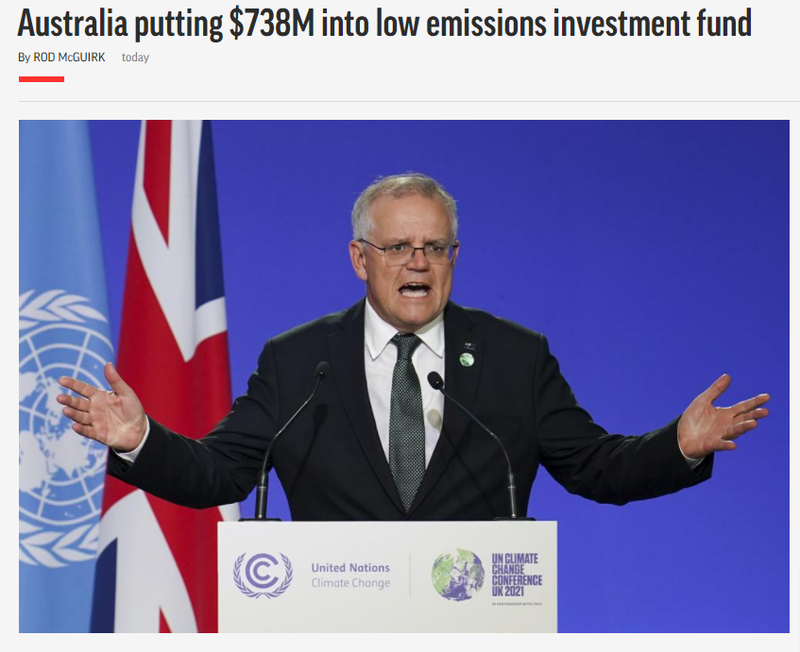 We think that with hydrogen grabbing a lot of global headlines, this might have been the cause of PRL’s share price to start heading north after some time trending sideways. 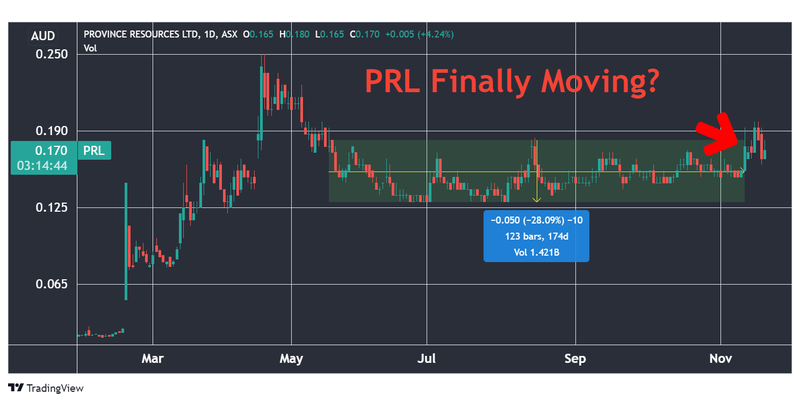 Here’s a media review which might explain what caused the move in the PRL share price last week.

Media Review: COP26 and more Hydrogen in the news

Over the last week the media highlighted green hydrogen's potential in an economy of the future.

Much of the action centered around events from COP26, the global climate summit in Glasgow.

This included a bit of sniping and posturing from Australian political and business figures but regardless, still resulted in some key outcomes in terms of renewable investment.

Not just for Australia, but for the world.

COP26 was a UN climate change summit and the first major test of the 2015 Paris Agreement.

It was designed to assess progress towards the goals laid out in the 2015 Paris Agreement and firm up commitments to further reductions in carbon emissions.

We think a reason that the PRL share price moved up on November 10 was because COP26 effectively forced leaders around the world, and specifically Australia, to make big commitments to reducing carbon emissions.

In the case of Australia, the commitment took the form of a $1B fund to be administered by Clean Energy Finance Corp., an Australian green bank that was established to increase investment in the clean energy sector.

Commitments like the one made last week are closely tied up with PRL’s future, as it is one of the first Zero Carbon green hydrogen companies on the ASX.

To a degree, Scott Morrison’s announcement of the $1B fund was overshadowed by comments from former PM Malcolm Turnbull and Fortescue boss Twiggy Forrest’s presentation: 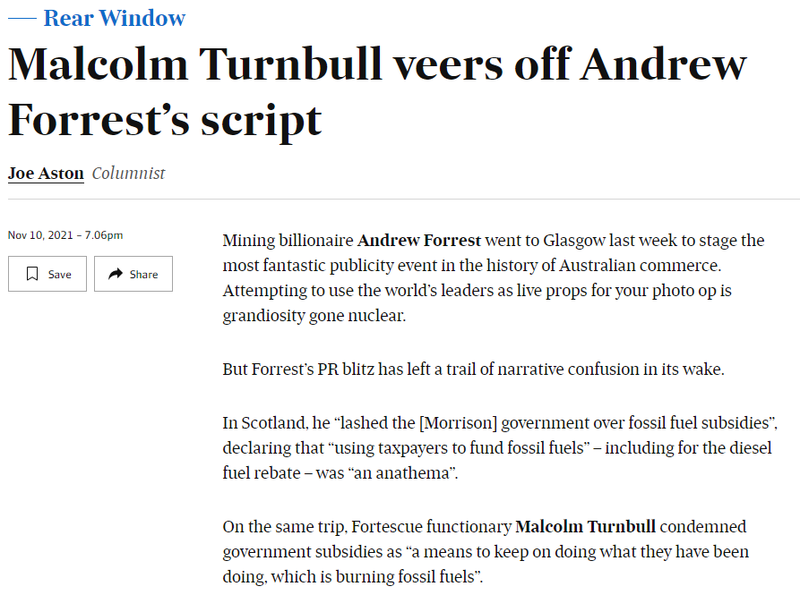 Big wig posturing aside, here’s what really matters amongst all this media hype...

Consensus is growing within Australia that emissions need to be drastically reduced, and Zero Carbon projects and technologies are needed to do it.

We think PRL is one of many components in a viable solution for reducing Australia’s emissions.

Should PRL’s project progress efficiently, it could become a major green hydrogen supplier in Australia and to other crucial markets like Japan and Korea.

Andrew Forrest or ‘Twiggy’ certainly seems to think that green hydrogen is the way forward: 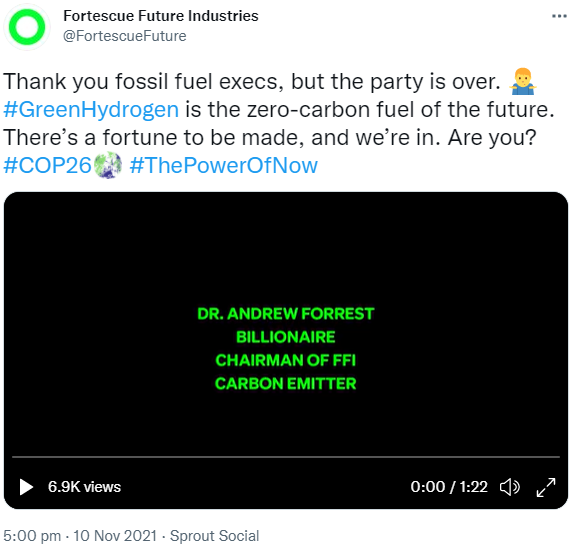 We had a hunch that the global climate talks in Glasgow would connect with PRL investors and last week we got the policy announcement we were looking for (the $1B fund).

We think that this foreshadows a much larger, broad-based move towards renewables by Australia and other major economies.

It will take time, money and innovation for Australia to shift towards a new green energy economy, but if it is serious about its 2050 zero emissions targets, then we think that Hydrogen is Australia’s best bet.

What we want to see from PRL over the coming months:

We believe PRL’s medium term plans are fully funded ($23.3M in cash as of 30 September), with PRL able to meet any capital requirements for the Scoping Study and feasibility studies at its green hydrogen project.

Here’s what to expect in the coming months from PRL:

We are going to try something a little different today with the milestones, and break down PRL’s progress into two “Key Objectives” that we want to see it achieve over the coming months.

✅ Zero Carbon Hydrogen Project Acquired: PRL will begin its new chapter as a Green Hydrogen company. It’s a long road ahead but we think it is in the right place at the right time to capitalise on this emerging industry.

✅ SODAR Machine Mobilised: The SODAR Machine will capture important wind and solar data that will be used inform the scoping study.

✅ Scoping Study Commenced and Total Eren Partnership MOU: PRL’s partner and supermajor company Total Eren will undertake a rigorous scoping study that we expect to take no more than 12 months to evaluate the initial commercial viability of its project. If successful, we expect a JV agreement with Total Eren to follow to help fund the project.

✅ MoU signed with GEV: Partnership with energy transport company Global Energy Ventures (ASX:GEV) to undertake a feasibility study on the export of Green Hydrogen to key Asian markets - like Japan, Korea and China.

for potential funding in the future.

🔲 Secure Pipeline Agreement: PRL to start discussions with potential buyers and the owners of the Dampier-Bunbury Natural Gas Pipeline.

In order for PRL to advance their Zero Carbon Hydrogen Project it is important that they have support from the community to help them advance the permitting process to get the project up and running. Because this is the first project of its kind on the ASX, it is important that PRL works with state and federal governments to provide a pathway to legal ‘tenure’ and permitting.

✅ Roger Martin Appointed to Board: Rodger is the former Chief of Staff to the WA Treasurer and former Minister for Aboriginal Affairs and Lands. He brings a wealth of experience to help PRL lobby the State government’s support for its green hydrogen Project.

🔄 Positive Stakeholder Outcome – WA Government: Today the WA Government provided a legal pathway for tenure so that PRL, and its partner Total Eren, can create this Hydrogen Project with legal certainty.

🔲 [NEW] Diversification Licence Granted - We want to see PRL granted with a licence under the new WA Government regime.

PRL is the second biggest holding in the Next Investors portfolio behind VUL. PRL has delivered several impressive announcements since February and is up over 500% since we first invested over 12 months ago in August 2020. Like we did with VUL after it delivered a number of material announcements and rose over 500%, we sold a small portion of our holding to recoup our initial investment.

Disclosure: The authors of this article and owners of Next Investors, S3 Consortium Pty Ltd, and associated entities, own 24,200,000 PRL shares at the time of publication.

S3 Consortium Pty Ltd has been engaged by PRL to share our commentary and opinion on the progress of our investment in PRL over time.