Aircore drilling is a shallow form of drilling, generally used as a precursor to generating higher priority drill-targets to then follow-up with RC/Diamond drilling.

An aircore drill bit can easily push through the top layers of weathered rock.

GAL is 4,000m into its 10,000m aircore drilling campaign - The primary goal for this program was not necessarily to identify anything new but to refine RC and diamond drill targets.

That changed (for the better) today when we got news that GAL hit some unexpected hard rock ~52m from the surface - Something the aircore drill bit couldn't handle.

Upon investigation it turned out that GAL has struck massive sulphides at a shallow depth, which was announced this morning.

What does this mean? Why is hitting massive sulphides good?

“Massive sulphides” are the types of rock that host precious metals - if you can find this type of rock, you have the right type of rock for mineralisation.

However - massive sulphides are typically found in deeper, fresher, bedrock - so are not often encountered in shallow aircore drilling like what GAL is doing now.

In addition, GAL intersected these massive sulphides on the margin of a large ulta-mafic intrusion - this is the exact setting where mineral deposits can occur.

So for GAL to hit massive sulphides during shallow drilling is a very encouraging sign.

Here is the sulphide chip (25mm across) that GAL was unable to break through with its aircore drill bit: 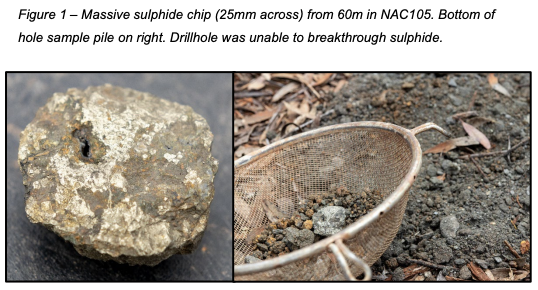 Handheld XRF readings taken on site indicated minor amounts of nickel and copper. We won't know the palladium, platinum, and gold results until the cores go to the lab for assaying.

In approximately 8-10 weeks we will get standard assay results from the remainder of the drill hole and all adjacent drill holes.

Follow up EM surveys and RC drilling is required for GAL to get a clearer picture of what kind of mineralisation is in the rock, the grade, and how deep it extends.

This follow up exploration will happen early next year.

Meanwhile GAL is going to finish the remaining 6,000m of its aircore drill programme at Norseman, then swiftly switch focus to its diamond drilling campaign on its Fraser Range nickel targets in December.

The Fraser Range assets first attracted us to GAL, so we are looking forward to that drilling event.

We are long term investors in GAL, a company that regularly runs high potential drilling exploration campaigns, aiming to make a large discovery.

GAL recently raised $6.5M at 26c, so is well funded for its current drilling campaigns and beyond.

We made our first investment in GAL in March of 2020 & have since increased our investment three times over the last 18 months. GAL is currently trading at ~25c, which is still below the recent placement price of 26c.

GAL is in the middle of a shallow aircore drilling program looking for palladium & nickel at its project in Norseman, in the Kambalda nickel belt of WA.

GAL’s aim for the 10,000m AC drilling program was to test 5 high priority Palladium-Nickel drill targets, plus a number of prospects which are essentially riskier un-confirmed targets.

Prior to this aircore drilling program, GAL did a lot of preliminary work to guide the drill targets - soil sampling managed to deliver high grade palladium mineralisation of up to 0.81g/t & Nickel grades of up to 0.25%. This project has also had some prior drilling on it which hit anomalous palladium.

All of this preliminary work determined the drilling locations that are being drilled now. The primary goal for this program was not necessarily to identify anything new but to refine RC and diamond drill targets.

Hoewer today we got news that during an air core drilling program GAL hit massive sulphides ~52m from the surface.

Massive sulphides are generally found in deeper bedrock so today’s result is huge for GAL & could be a game-changer for the Palladium-Nickel prospectivity at the Norseman Project.

With drilling only 40% done we are hoping that GAL can get a few more unexpected pleasant surprises.

In our previous note we mentioned that we were primarily looking out for the presence of Palladium in the assay results, today’s announcement was a welcome surprise to us.

Today’s announcement adds further weight to the potential for a sulphide discovery at the Norseman Project.

Nickel or palladium mineralisation in the assay results coupled up with follow-up works on the massive sulphide intersection is really shaping the Norseman project into something very interesting.

If we see EM Surveys indicating stronger conductors at depth & then RC/Diamond drilling confirming this, GAL could really be onto something here.

We will be watching this one closely...

We mentioned in our previous note that we were looking forward to the GAL’s next Fraser Range drilling programme to start in December.

GAL will be diamond drilling its highest priority Fraser Range nickel targets in this programme.

The Fraser Range projects have always been our favorite GAL assets as we think they hold the potential for the biggest discovery.

During a previous RC drilling program, GAL clipped the top of an EM conductor and confirmed the presence of sulphides, after running downhole EM surveys (which confirmed a strong conductor further down, GAL set this as the primary target).

The EM results showed that the conductive response is related to sulphide mineralisation - but the diamond drilling campaign will determine whether or not the sulphides contain economic mineralisation at depth. 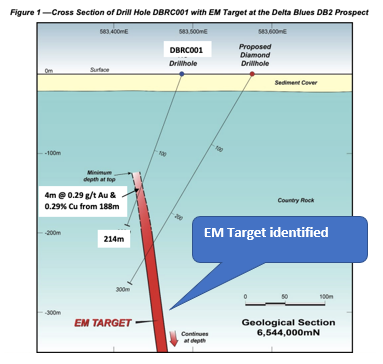 After months of target generation work putting together this drilling program, it’s almost time for GAL to get the drill-rigs on the ground and running.

Fraser Range nickel discoveries can take a long-time to fully delineate, but if a company is lucky enough to make one then it can be extremely rewarding for shareholders.

Making a large nickel discovery in the Fraser Range is our primary reason for investing in GAL and we are looking forward to seeing what GAL can find.

More ground being added to the Fraser Range projects:

Last week we also saw GAL announce that it had expanded it’s landholding in the Fraser Range project area by a further 70km^2, increasing GAL’s total tenement holdings to 672km^2.

We like that GAL haven't wasted any time & have already scheduled Ground EM Surveying for December as part of it’s drill target generation program here. 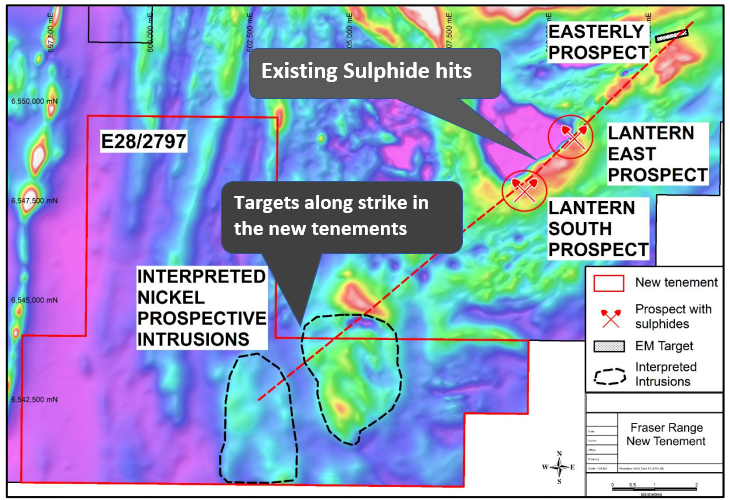 Hidden in the acquisition announcement was a summary of the existing Aeromagnetic Data showing “intrusive rock signatures with potential for Nova Style nickel/Copper mineralisation”.

Basically GAL have added another tenement that they clearly think is prospective enough to warrant testing in future drilling programs. The more targets GAL can generate the more there will be to look forward to. Bring on the Fraser Range drilling programme.

Why are we looking forward to the Fraser Range drilling programme?

The main reason for our investment in GAL as mentioned above is for its Fraser Range nickel projects.

In exploration, the rewards can be large, HOWEVER metals exploration is a high risk endeavour, especially if a small cap company with zero revenue to fall back on.

When doing due diligence on potential investment opportunities we always check to see who are the people backing a particular company.

With GAL we have the man who was behind the first nickel discovery in the Fraser Range - Mark Creasy.

Mark Creasy is GAL’s major shareholder, owning 24.6% of GAL shares & was responsible for putting the Fraser Range region on the map with the $1.8BN Nova nickel discovery. 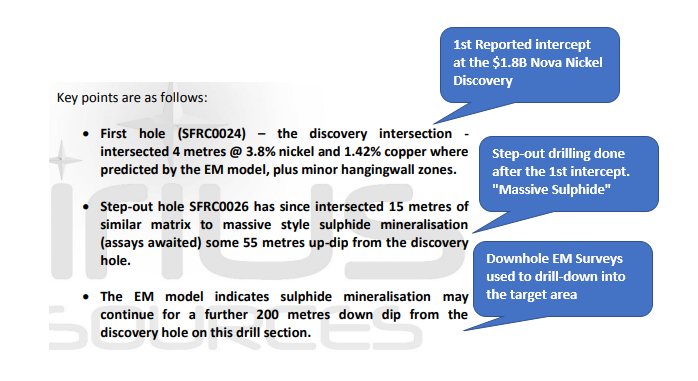 GAL is following the same playbook for exploration in the Fraser Range that led Mark Creasy’s Sirius to the ultimate discovery success:

There are no guarantees in high risk exploration, but we definitely like that GAL is following the same exploration script as Sirius.

Creasy knows the area like the back of his hand having one of the largest exposures in much of the high potential exploration ground across the Fraser Range across various entities. We are backing his giant stake in GAL as an indicator that he likes GAL’s Fraser Range ground in particular.

Lets not forget that IGO is also a major shareholder here owning 8.9% of the company. IGO are another entity with a deep knowledge base of the area & were the ones who purchased the Nova nickel deposit off Creasy’s Sirius Resources for $1.8BN - IGO also has a vested interest in finding the next large nickel discovery.

The cherry on the top for us is that GAL is being led by Brad Underwood as Managing Director who discovered the second nickel deposit in the Fraser Range - “Silver Knight” alongside Creasy.

We think the people backing GAL to pull off a major discovery are some of the best you could have when looking for the next large nickel discovery in the Fraser Range.

Ultimately the proof will be in the rocks though.

What's Next for GAL?

With massive sulphides intersected at shallow depth, we will turn our attention to seeing if any more sulphides are intercepted from the remaining 6,000m of Aircore drilling that is still scheduled.

Assay results from the entire drilling program should also start to come in just before the end of the year/early 2022.

The aircore drilling program is largely being used to generate potential follow up targets for RC/Diamond drilling in 2022 so we are mainly looking to see GAL generate some interesting follow-up drill targets. A good result for us will be to show that there is Palladium presence across most of the AC holes.

Whilst waiting for the Assays from the Norseman project, we are expecting drilling to start at the Fraser Range project sometime in December.

The next 6 months for GAL will be action packed and with a market cap of $42M, $10.4M in cash, giving an $32M enterprise value, we think there is leverage to a major nickel discovery here.

Disclosure: The authors of this article and owners of Next Investors, S3 Consortium Pty Ltd, and associated entities (including staff), own 1,935,000 GAL shares.