Our investment Galileo Mining (ASX:GAL) is an early stage explorer focussed on finding the metals that are used to drive clean energy - in particular nickel, copper, cobalt and palladium.

After raising $6.5M at 26c a few weeks ago, and now with a total $10.4M in the bank (at Sept 30th), GAL is starting TWO drilling programmes: one today and another in a few weeks.

We have increased our position in GAL three times over the last 18 months. GAL is currently trading at ~23c, which is below our average entry price of ~ 25c AND below the recent 26c placement price - which we also participated in along with major shareholder Mark Creasy who invested ~ $1.04M.

Drilling is always the exciting time in an ASX explorer's life - the culmination of months of preliminary work to define and refine drill targets - now GAL has two drill campaigns that it is bringing to boil between now and December which should keep investors engaged.

Each drilling campaign is designed to get GAL closer to making a large discovery - however this is early stage exploration, and even with the best management and exploration targets, nothing is ever a guarantee...

GAL’s 1st drill programme started today - Today GAL started drilling for palladium and nickel in Norseman, WA, and is running a 10,000m, aircore drilling programme on 5 targets that will run for the next 6 weeks.

GAL’s 2nd drill programme starts in a few weeks - this is the big one for us, in December GAL will be diamond drilling its highest priority Fraser Range nickel targets - this is the main project that we are invested in GAL for.

Why we invested in GAL

We are long term investors in GAL, we like GAL’s management and tight capital structure that is leveraged to exploration success.

Creasy has a large stake in much of the high potential exploration ground across the Fraser Range across various entities - we are backing his giant stake in GAL to be a good sign that he likes GAL’s Fraser Range ground in particular.

Interestingly Creasy topped up his GAL holdings to the tune of $1.04M in the recent GAL placement...

IGO Ltd holds 8.9% of GAL - IGO purchased the Nova nickel deposit and mine off Creasy’s Sirius Resources for $1.8BN - IGO also has a vested interest in finding the next large nickel discovery.

So IGO plus Creasy entities hold 33.5% of the GAL shares on issue, and as far as we can tell, and judging on their past behaviour, they don't intend to sell anytime soon.

After that, there isn't a whole lot of free float of GAL shares to go around, which means the GAL share price can move pretty quickly on news - both good and bad.

And on that basis, we are backing this group to find the third... no one said it would be easy though - metals exploration is hard, and it can take years to successfully find something meaningful.

To help its cause, GAL always makes sure it has well prepared drill targets, and drills very regularly - this is drilling campaign number 14 since its 2018 IPO - so there is always plenty of discovery potential in GAL and lots of events for investors to look forward to.

Interestingly GAL is currently trading at around 23c - the lowest it's been since March this year, and below the recent 26c placement price.

We think GAL might start to gain a bit more interest from the market as it gets closer to its Fraser Range nickel drilling.

What we are looking out for next:

WHAT NEXT: Norseman Nickel-Palladium Assay results in a few weeks: GAL had previously drilled its palladium-nickel project, and found the presence of palladium, and it also found high grade palladium in soil sampling.

Now, the round of aircore drilling launched today will test where more high grade palladium might be, and allow GAL to plan follow up RC / diamond drilling later on - which will help them to hopefully make a meaningful discovery and with it a resource definition.

Palladium is not picked up visually in drill cores, so we won't be expecting photos of nice sparkly drill cores during drilling - we will need to wait for assay results to come through, which we expect should start coming in from mid December to late January.

WHAT NEXT: Fraser Range Nickel drilling commences, drill core analysis (visual) soon after. GAL’s previous drilling clipped the top of an EM conductor and they confirmed sulphides - the next step was running a down hole EM survey, which confirmed a strong conductor further down - which is now GAL’s target for this drilling in a few weeks (more on this below).

What we want to see next at the Fraser Range is drilling to start by December, and then visible sulphides in the drill cores prior to assay results would be a big result, otherwise we will wait to see what the assay lab returns.

GAL’s Norseman project already has a 26,600 tonne cobalt resource that could get bigger, but in recent months GAL has been focused on the increasingly promising palladium targets at the project.

GAL currently has a total of five high priority palladium-nickel drill targets, plus a number of “prospects” it will be drill testing (“prospects” are basically less well defined than targets).

GAL already has some RC drill targets in the pipeline at this project, but wants to add more to them so it can flesh out its RC drill campaign - and that is what this current round of AC drilling intends to do.

GAL has planned a 10,000m AC drill programme, and will be drilling over the next 6 weeks.

Previous soil sampling demonstrated high value palladium of up to 0.81 g/tonne and nickel of up to 0.25% that has helped define the drilling locations.

This is not the first drilling event here, previous results have shown the presence of palladium at depth - 35 holes found anomalous palladium of > 0.4 g/tonne in regolith and > 0.2 g/tonne palladium in fresh rock.

This is a great start - for palladium exploration around 1.5g/t to 2g/t is considered really good (the closer to surface the better).

The current round of drilling is going to help plan the next stage of deeper RC / diamond drilling.

You can see GAL’s priority drill targets on the magnetic imaging below - the dotted black line is a prospective contact zone that is the focus of GAL's attention, along with previous drilling and soil sampling results. 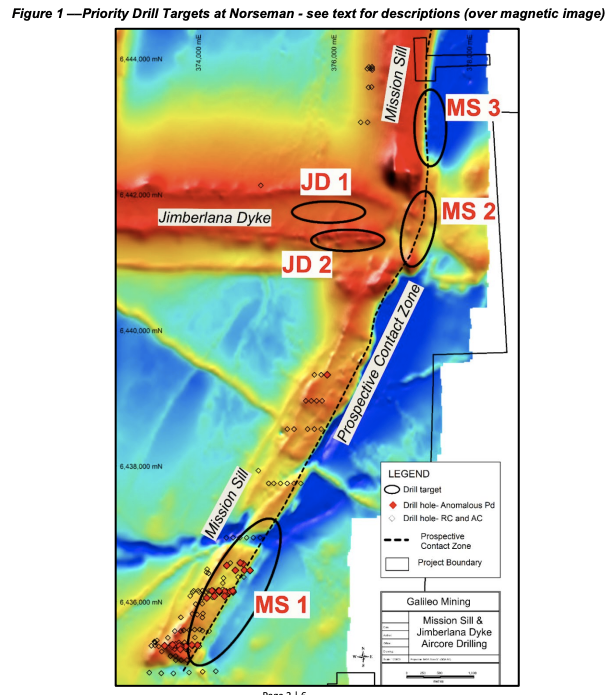 More on GAL’s diamond drilling for nickel in December

Making a large nickel discovery in the Fraser Range is our primary reason for investing in GAL.

Fraser Range nickel discoveries can take multiple drilling campaigns, but if a company is lucky enough to make a discovery, they can be extremely large and valuable.

GAL’s next Fraser Range diamond drilling program is scheduled to start in December, and will be for 1,200m over three holes, targeting a deeper EM conductor previously found.

Earlier this year GAL ran an RC drilling campaign where it intersected prospective sulphides (the type of rock that can contain nickel).

GAL then ran a Downhole EM survey that confirmed GAL only intercepted the very top of the conductor that was first intercepted - check out the image below.

DBRC001 is the previous RC drillhole, the red shading is the EM conductor, and you can see over to the right the proposed diamond drill hole that will attempt to intersect the conductor.

The next step will be to diamond drill through the conductor it and see if GAL can intersect high grade nickel sulphides at depth. 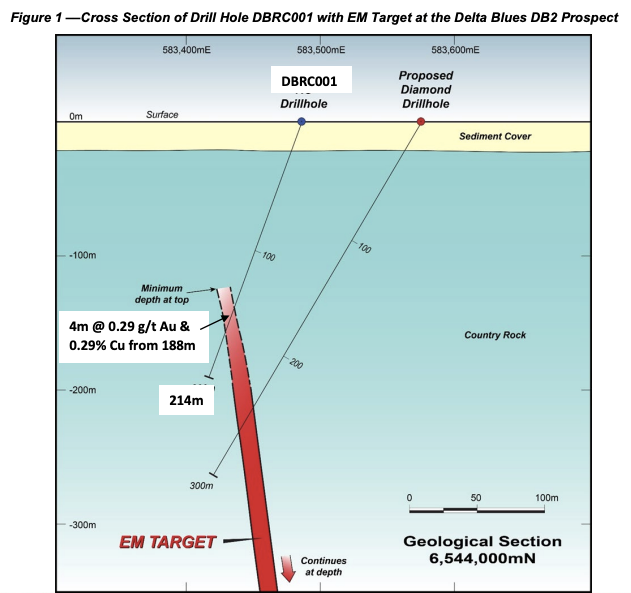 The EM results heavily imply that the conductive response is related to sulphide mineralisation - but the diamond drilling campaign will determine whether or not the sulphides contain economic mineralisation at depth.

We are looking forward to seeing what GAL can find.