Our recap of this week’s Sydney Energy Conference

This week, the Australian government and the International Energy Agency (IEA) hosted the first ever Sydney Energy Forum.

The key themes from the event were:

We watched all 14 hours. Today we break down the key points and how the topics might impact our clean energy, critical metals and natural gas Portfolio companies.

The Prime Minister set the stage, highlighting Australia’s ambitions to be a renewable energy superpower. He was optimistic about the global energy future, and the importance of international collaboration.

International speakers provided insights into challenges and opportunities of all aspects of the renewable energy future.

It's clear that big questions are being asked of governments and industry around how to move to a renewable economy while facing rising inflation, energy security, and supply chain constraints.

Notably, the conflict in Ukraine is the big ‘spanner in the works’, spurring and disrupting the drive towards a renewable future.

Some felt the answer to the ‘global energy crisis’ is to go all in on green energies like solar, wind, and hydrogen.

Others think conventional energies like natural gas and oil can be used as a transition to renewables.

But one thing is certain — the role critical minerals will play in a renewable energy future.

Car makers can build a battery factory within 24 months, but bringing a new mine into production can take 10 years.

This disconnect, between downstream operators and upstream mineral suppliers, highlights one of the challenges in meeting net zero targets and the importance of mining investments.

Supply chain security is important too with concerns around the concentration of battery metals’ processing and manufacturing in China.

With the Ukraine conflict in mind, this supply chain concentration - especially over energy and raw materials for renewables - carries a geopolitical risk Indo-Pacific region countries.

According to Bloomberg, the Biden administration will support miners in stopping China from weaponising battery metals in the way that Russia has weaponised natural gas.

The world is realising that a renewable future requires a diversity of local inputs and manufacturing.

At Next Investors our Portfolios were constructed with a big focus on Energy Transition Metals and finding projects that could support materials supply.

We think our Investments will can help in balancing the move to renewable energy, particularly the critical mineral inputs required for the ‘pace and scale’ to meet ambitious net zero targets.

Events like the Sydney Energy Forum validate our investment thematics and emphasise the importance of net zero goals.

If you would like to watch the entire conference see day 1 and day 2 here.

But for those without a spare 14 hours, we’ve summarised the key takeaways from our favourite speakers/panels from the event:

Critical minerals and the ‘pace and scale’ needed to accelerate development of EV’s and grid scale batteries. 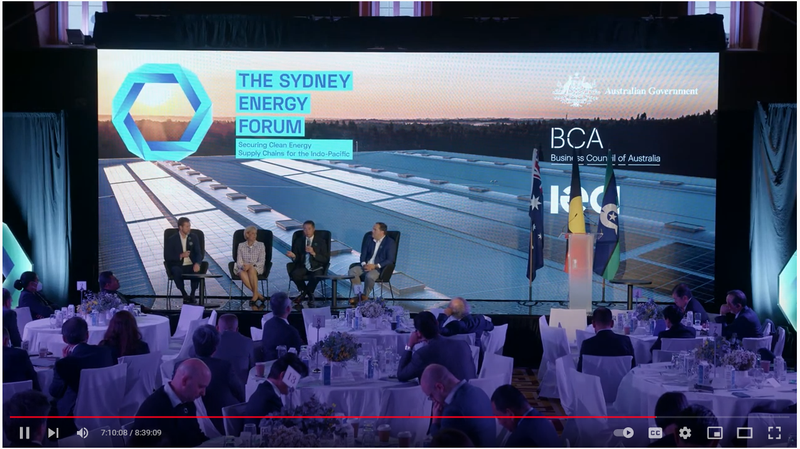 Who is speaking: (Watch Now)

However, raw materials production can't keep up the pace and scale. A focus on developing new mines is needed BEFORE there's a need for more battery metal production.

A possible answer is for downstream automobile manufactures like Tesla or Volkswagen to move upstream and invest directly in mining industry.

We have been waiting for this wave of capital to transform the fortunes of our mining Investments. It appears that the time has now come for downstream operators to take a more active role in supply chains.

We also note how a Japanese government led partnership with Lynas led to one of the largest rare earths miners in the world outside of China.

CEO Lacaze highlights how important securing critical mineral supply chains are for countries in the Indo-Pacific region, to the point where governments need to put in incentive structures to promote private capital investment into the mining.

The stocks in our Portfolios sit across the various stages of the mining company lifecycle, from exploration all the way to development.

The long term outlook for our investment in these companies looks fundamentally strong.

A macro outlook on the global energy crisis 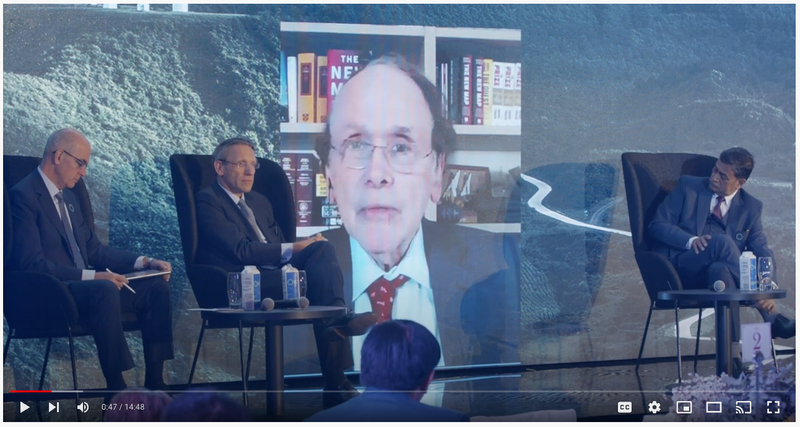 Who is speaking: Dr Daniel Yergin - Vice Chair of S&P Global, serves on the US Secretary of Energy Advisory Board (Watch Now)

Africa must play a big part in the future of energy. If the continent wants to improve its standards of living, it must leverage conventional energy sources. This highlights the importance of Invictus Energy’s (ASX:IVZ) oil and gas project to Zimbabwe.

Trusted voices like Dr Yurgin’s give credence to the big trade off questions being asked of governments. He provides a balanced rationale around why the path to net zero requires navigating the geopolitical landscape, while supporting both conventional energy and mineral mining supply. 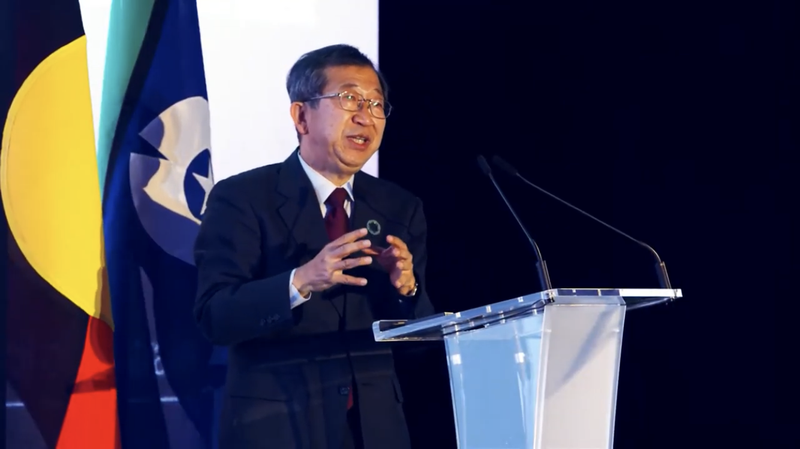 Our Take: Terazawa made an interesting point: it took Japan 50 years to develop its LNG infrastructure. But with a goal of reaching net zero by 2050, the hydrogen revolution will need to cut the timeframe for a switch to a new energy source to 30 years.

Hydrogen stocks in our Portfolio include Province Resources (ASX:PRL) and Elixir Energy (ASX:EXR) (which interestingly has an MOU with Japan’s SoftBank Energy to develop EXR’s Mongolian green hydrogen project).

We also really liked this slide in Terazawa’s presentation when he talks about critical minerals — it looks a lot like our favourite McKinsey chart of the critical minerals for the renewable energy transition: 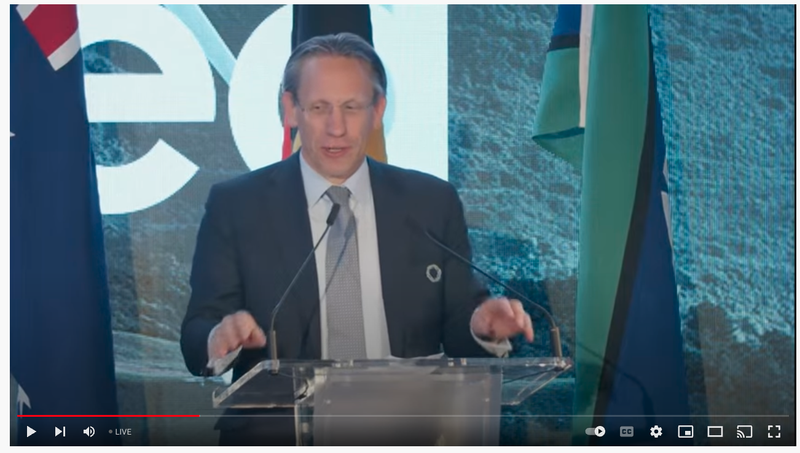 Our Take: Dr Kukies acknowledged the tough spot that Germany is in and how gas from non-Russian sources have a role in giving enough space for Germany to reach almost exclusively renewable energy.

We note our most successful Investment to date, Vulcan Energy Resources (ASX:VUL), is located in Germany and is aiming to supply their vast car manufacturing industry with sustainably produced lithium. VUL has also moved to provide geothermal energy for a local municipality, further helping Germany wean itself off fossil fuels. 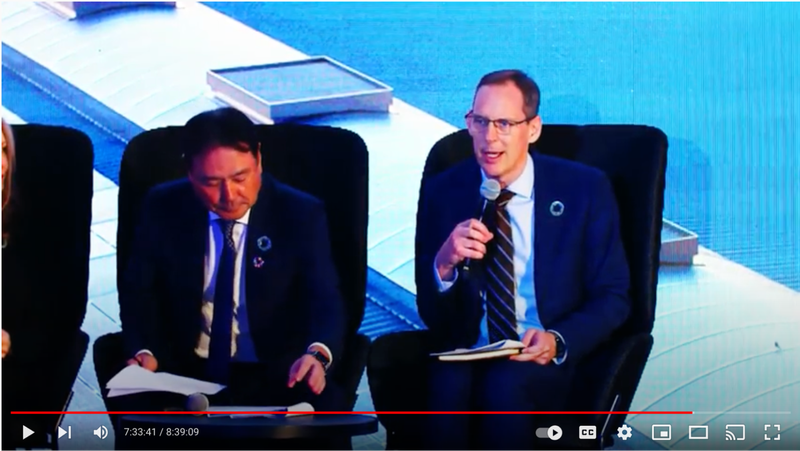 Who is speaking: (Watch Now)

Our Take: The hydrogen industry is still in its infancy, but there is a big push from industry (heavy transport / steel) to make it a reality. The focus on technology, especially in shipping, will cut costs for hydrogen and make project economics more viable for financiers.

Interestingly, Woodside's big hydrogen production projects (like PRL’s) would be staggered rather than all at once. This makes projects more attractive, as the upfront capital investment required can be deployed over a number of years while project and technology is proven to be economical.

There was plenty more to the conference, but these were the panels and speakers most relevant to our Portfolios.

We have also highlighted some other discussions we found interesting:

Ultimately, the shift to a renewable energy future will take the collaboration and collective drive and leadership of industry, government, private sector and finance.

The global attention is there and our Portfolios are well placed to take advantage of this push over the next 10 years.

EV1: Some of the best graphite in the world?

GAL: Second round of drilling completed, assays expected in August.

GTR: Japan starting to recognise the importance of nuclear power

We have been following the GAL story for over two years and recently increased our position in line with the cap raise at $1.20.

A “change in substantial holding notice” released this week showed that mining billionaire Mark Creasy had invested a further $7M into GAL.

This wasn't the only buying Creasy was doing. In the weeks leading up to the placement, Creasy also purchased $2.26M on market at an average share price of $1.48 per share.

With GAL hitting sulphides in every single drillhole, we now know that:

📰 Read our full Note: Mark Creasy Doubles Down on GAL in $20M Cap Raise (and so did we)

This week we provided our thoughts on our bauxite Investment Canyon Resources’ (ASX:CAY) recent $5M cap raise at 4.5c per share, and a deep dive into the BFS.

The BFS is a key milestone towards securing strategic financing, offtake and government agreements.

Bauxite supply, and the broader aluminium industry, is facing persistent supply shocks due to geopolitical events, underlining the importance of new bauxite projects such as CAY’s Minim Martap Project.

With strong project economics indicated by the BFS and despite recent share price woes, we think CAY is in the right place at the right time to capitalise on this opportunity.