BPM Minerals Ltd (ASX:BPM) has commissioned Next Investors to provide this service.

What does BPM do?

Lead and zinc are two industrial metals that have moved higher due to an inflation-driven commodities supercycle. Lead is mainly used for Internal Combustion Engine (petrol car) batteries while zinc is primarily used for galvanising steel and making alloys. As fiscal and monetary stimulus increases infrastructure spending - we believe zinc in particular is primed to move beyond its current elevated price to all-time-highs.

Why did we invest in BPM?

At the start of the year, BPM had only 49M shares and 38M options on issue with a market cap of just $13.7M. With ~$4.4M in cash in the bank and an enterprise value of $9.3M it is highly leveraged to a new discovery.

Objective #2: Side bets: Drilling at the company’s other projects.

We expect BPM will make drilling progress on the company’s other projects, we are looking for:

There is always a risk with exploration projects that the necessary approvals or agreements like land access, heritage and native title agreements are not reached and permits can go un-granted.

BPM's projects are at a very early stage, most are yet to have high-priority drill targets identified, any drilling programs done in the near-term could return no mineralisation.

We originally invested in BPM back in May 2021, hoping they would drill the Hawkins prospect before Christmas 2021… that definitely didn't happen so we now take BPM’s timelines with a grain of salt - timelines may be delayed.

BPM is a junior explorer with early stage projects. They still need to do a lot of target generation work before the projects are ready to drill, markets may lose momentum and funding for early stage higher risk exploration like this could dry up.

We are primarily invested in BPM for the lead/zinc drilling at Earaheady, but the market may lose interest if lead and zinc prices cool off.

Our investment plan for BPM is the same as for all our early stage, exploration investments:

Disclosure: The authors of this article and owners of Next Investors, S3 Consortium Pty Ltd, and associated entities, own 1,670,000 BPM shares and 850,000 BPM options at the time of writing this memo. S3 Consortium Pty Ltd has been engaged by BPM to share our commentary on the progress of our investment in BPM over time.

Tax loss selling over, market back in August?

Small caps in a shocking market

Why we invest in IPOs and our investment approach

Our Past Commentary on BPM Minerals Ltd

This morning our exploration Investment BPM Minerals (ASX: BPM) announced that drilling at its Hawkins Project in the Earaheedy basin had been restarted after a brief pause due to unexpected extreme weather in the Pilbara.

The exploration program is for a total of ~7,500m of drilling comprising both aircore and RC drilling. This will mean BPM can drill with the aircore rig first and then follow up any interesting deeper prospective targets with the heavier RC rig concurrently. 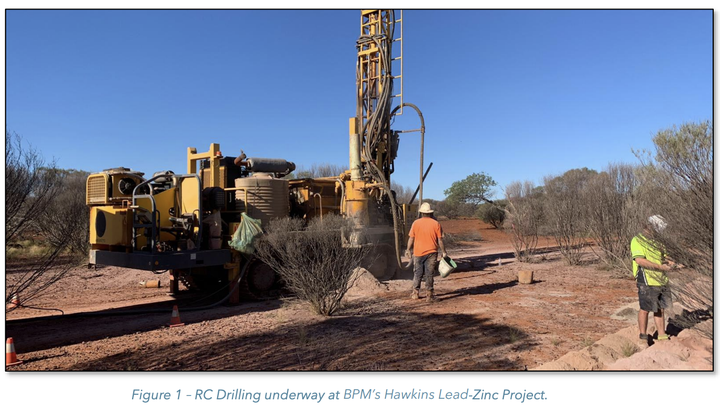 The drilling program is being done approximately 40km to the northwest along strike from $168M capped Rumble Resources lead-zinc discovery.

To get a better idea of the context for BPM’s drilling program and to get our deep dive into what we what we think BPM are targeting, check out our last note on BPM here: $10M capped BPM drilling now, 40km along strike from $223M capped Rumble Resources

Key Objective #2: Drilling at the company’s other projects.

Today, our exploration Investment BPM Minerals (ASX: BPM) confirmed that all of the assays from its aircore drilling program at its Nepean nickel project had been received.

The assays come after BPM started a 42 hole (~1,887m) drilling program in late February of this year, which was designed to specifically test 11 different EM targets before ranking these for future follow up RC/Diamond drilling programs.

As expected BPM didn't make a new discovery here, but the confirmation of a western cluster of conductors that warrant drill testing with heavier drill rigs is a positive sign.

Whilst our focus with BPM is on the Hawkins Project we don't mind seeing small, cost effective drilling programs like this one to put together future exploration targets at BPM’s side bet projects.

This morning our exploration Investment BPM Minerals (ASX: BPM) announced that drilling at its Hawkins Project in the Earaheedy basin had been paused due to “Unseasonal and record rainfall in the Pilbara”.

BPM confirmed that the drill rig is still on site and the entire drilling program will start back up as soon as it is completely safe to be back on site.

The program is for a total of ~7,500m of drilling comprising both Aircore and RC drilling. This will mean BPM can drill with the aircore rig first and then follow up any interesting deeper prospective targets with the heavier RC rig concurrently.

To get a better idea of the context for this round of drilling and for a deeper dive into what we are looking for check out our last note on BPM here: $10M capped BPM drilling now, 40km along strike from $223M capped Rumble Resources

Our exploration investment, BPM Minerals (ASX:BPM), is getting mighty close to drilling its main project in the Earaheedy basin.

The zinc market is currently straining under the pressure of high prices: 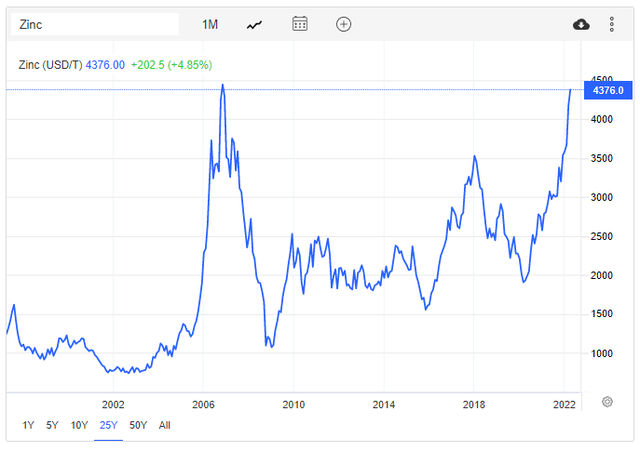 Drilling at the Hawkins project is scheduled to begin in “mid-April” and BPM is looking to find a lead-zinc deposit similar to Rumble’s Chinook discovery.

It’s been a long time coming, but as investors we are excited to see what BPM might turn up.

Importantly. BPM will be using a portable X-Ray Fluorescence (XRF) Analyser which will give them much needed optionality in their 7,500m AC/RC drill program.

If the XRF picks up anomalies in the drill cores, BPM will be able to respond immediately with infill and deeper RC drilling.

Should BPM produce good lead-zinc grades, we think that they will be well received by the market.

Here is why we invested in BPM and what we expect them to achieve in 2022 - BPM Investment Memo.

This morning BPM came out of a trading halt having raised $3M via a well supported placement @21c per share to leading domestic institutional investors and high-net-worth investors. The placement also came with 1 free option that will be exercisable @28c with a two year expiry.

We like that the funds have been earmarked to drive “aggressive exploration” at the Hawkins lead-zinc Project, at which BPM has planned a 7,500m Air Core/Reverse Circulation drilling program later this month.

The shares from the capital raise will be issued as follows:

In our 2022 Investment Memo, we mentioned that the Hawkins Project which sits along strike Rumble Resources’ lead/zinc discovery in the Earaheedy Basin. We are primarily invested in BPM to see it attempt to replicate the success of Rumble in this part of WA.

The placement follows an announcement a few weeks ago, that BPM is moving forward with the 7,500 metre Aircore/RC drilling program that’s planned for mid-April. 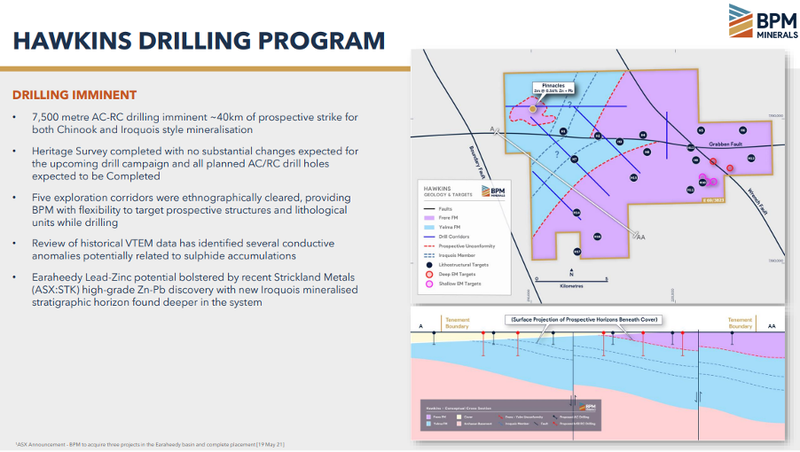 As you can see, this drilling program was the primary objective that we wanted to see BPM achieve this year. 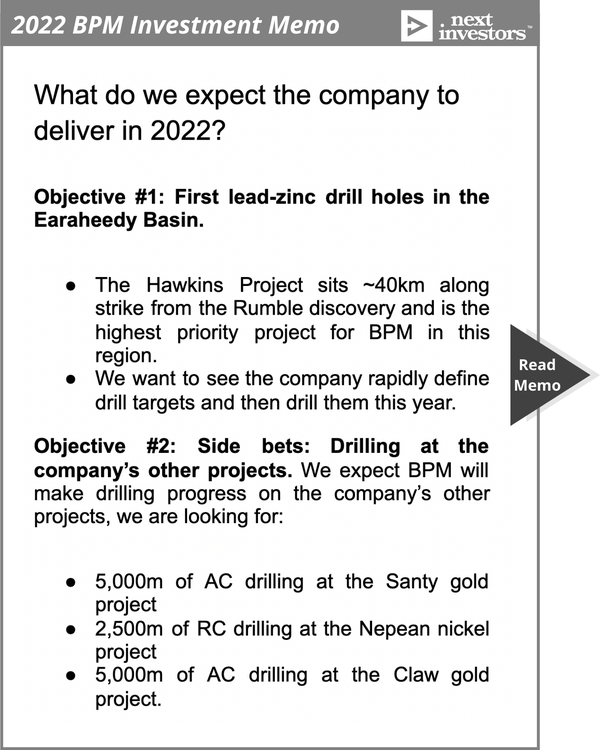 What’s next: we’ll be looking for confirmation that the drilling program has begun, ahead of any updates on drilling progress/results.

To see why we think the Hawkins Project is BPM’s best drilling prospect check out our previous note on BPM here.

Aircore drilling in the Earaheedy near Rumble Resources

BPM today confirmed that it will commence a first pass aircore drilling program at the Hawkins Earaheedy Project in mid-April. It also said that ~1,887m of aircore drilling has now been completed at the Nepean Nickel Project.

The main reason for our investment in BPM was to see it drill the Hawkins Project, which sits next door to $257M capped Rumble Resources’ Chinook discovery in the Earaheedy basin.

The Hawkins drilling program will comprise ~7,500m of aircore drilling to identify higher priority targets that can be followed up with RC/diamond drilling. Essentially, this drilling program is more about ranking follow up drill targets and less about actually making a new discovery.

Drilling will be done over the blue lines on the map below. We are particularly interested in seeing if BPM can prove up drill targets near the “Pinnacles” prospect and around the deep EM targets that sit right near the two major fault lines in the area.

BPM also confirmed today that it has completed ~1,887m of aircore drilling at the Nepean Nickel Project. Results are expected in the next 10-12 weeks. We wrote about these targets in our last note which you can read here.

As we noted above, our main reason for investing in BPM was its lead-zinc drilling at its Hawkins Project, so we are less focused on these nickel results, but if anything were to come from them it would be a pleasant surprise.

To see all of the reasons why we hold BPM and what we want to see the company achieve in 2022 check out our 2022 Investment Memo here.

Next, we will be watching to see drill rigs mobilise on site at the Hawkins project.

Yesterday, BPM announced that heritage surveys had commenced across its Hawkins zinc/lead project in the Earaheedy basin in preparation for the 7,500-metre air core drilling program, scheduled for ~early April.

We are not expecting BPM to make a discovery with the air core drilling program but instead want to see the company throw up enough follow-up drill targets to warrant deeper RC/diamond drilling later in the year.

In our 2022 Investment Memo, we highlighted that the Hawkins project was the main reason we continue to hold BPM in our portfolio, With the project sitting ~40km away from Rumble Resources (capped at $269M) Chinook discovery.

It has been a long time coming for the Hawkins project but today’s announcement is the final step before BPM can start to tackle objective #1 from our 2022 Investment Memo and begin exploration works across the project.

Last week we put out a note on BPM’s Nickel targets identified next door to our other portfolio company Auroch Minerals nickel project.

Today BPM announced that drilling had commenced across the 11 identified EM conductors. To read more about these 11 targets, read our last note here.

The 3,000m of Aircore drilling is expected to take a few weeks and we don't anticipate any assays coming in for at least another 4-6 weeks after that.