Graphite and our Pick of the Year - Battery Materials Thematic

We think graphite will be the “in focus” battery material next year.

Lithium has had a huge run over the last 18 months - the graphite price has yet to take off but has just started creeping up over the last few months.

On Tuesday we announced our Next Investors 2022 Small Cap Pick of the Year, Sarytogan Graphite (ASX:SGA).

As with our previous Picks of the Year, we see the potential for this company to re-rate 1,000%+ over the coming 3+ year holding period.

Our last two Next Investors Small Cap Picks of the Year were:

As always, just because these last two picks performed well does NOT mean SGA will perform this way - small cap investing is risky and all sorts of things can go wrong.

But with that being said, battery materials are still helping prop up the market - and we see SGA as part of a decade-long macro theme.

We think graphite is the next cab off the rank for battery materials market sentiment.

Benchmark Minerals predicts a need of 97 new graphite mines over the next 13 years, assuming 56,000 tonnes/year average mine capacity.

That’s just one of the many reasons we’ve Invested in SGA and made it our 2022 Small Cap Pick of the Year.

We added SGA to our Portfolio in July when it IPO’d - on Tuesday SGA’s latest metallurgical test work (metwork) news came out at a breakthrough 99.87% purity, which gave us the confidence we needed to make it our 2022 Small Cap Pick of the Year.

Metwork is essentially running small scale processing, extraction and purification tests on samples from a resource deposit in the hope that a certain level of purity can be achieved with a relatively simple set of steps that can be scaled up economically.

Metwork is a key hurdle for early stage resource companies - it determines if a resource discovery can be economically processed to a purity needed in target markets.

Put simply - a big resource deposit is irrelevant if the metwork fails or is too complex.

Which is why it was so significant for SGA to announce on Tuesday that the company had achieved purification of its graphite to 99.87% Total Graphic Carbon (TGC) — a big step towards battery anode specification (99.95%).

Click here for our full SGA 2022 Small Cap Pick of The Year note.

Since listing, SGA has been putting out great drill results but the market didn’t care much until the metwork was confirmed.

We already knew SGA’s graphite deposit was giant and high grade, so earlier new drill results showing it was even bigger didn’t excite the market - who cares if it’s even bigger unless the metwork comes back positive.

Now that the metwork is out, the economic viability of the deposit has been firmed up and potential for a commercial mine has increased - so future great drilling results are now even more meaningful.

A couple days after we announced SGA as our 2022 Small Cap Pick of the Year, the company announced more drilling results that indicated the already massive graphite deposit was bigger.

All this ahead of releasing an updated JORC resource early next year.

We’ve been tracking all this drilling progress in our own 3D modelling software which we find particularly helpful for understanding how deposits are shaping up.

Disclaimer: these 3D models are just an interpretation of the publicly released results and several assumptions have been made. The models are for illustrative purposes only and to help explain the upcoming drilling. Investors should not rely on these illustrative models in making any investment decisions.

Here is our 3D model showing the new drill holes and extension to the deposit: 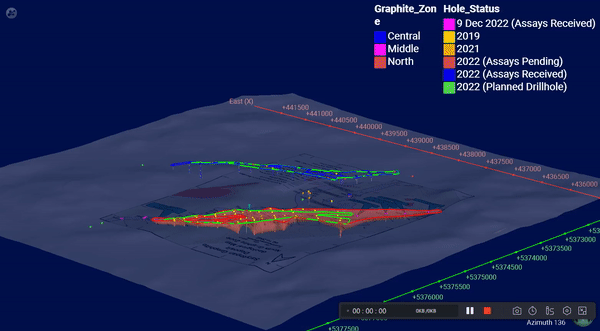 As SGA moves more of its resource into higher confidence categories with this drilling, we think it will be well positioned for 2023, which we hope will be a big year for graphite.

Can graphite ‘do a lithium’ in 2023? Time will tell, but we’ve Invested accordingly.

This brings us to our other high conviction Investment in the graphite space, our 2021 Wise-Owl Pick of the Year Evolution Energy Minerals (ASX:EV1).

EV1 is developing its advanced stage graphite project in Tanzania with an offtake agreement already in place.

We like EV1 because of its advanced stage and comparably low cost and quick time to build a very high purity graphite mine.

EV1’s project is much closer to the development stage and the company is currently going through the “quiet execution” mode that feasibility companies undertake.

🎓Click here to learn more about the different stages of the resource mining company life cycle.

During the feasibility studies stage, companies will generally make fewer ASX announcements while working on multiple different things in the background to try and get its project into development.

Things like mine permitting, environmental permitting, feasibility studies and financing can take time to finalise.

EV1 is very close to moving into the development stage, where we expect a share price re-rate.

In recent months the Wise-Owl 2021 Pick of the Year EV1 has struck the following binding deals:

With these milestones ticked off we are now waiting for EV1 to deliver two major catalysts.

Just as the metwork announcement re-rated SGA we suspect the market will reward EV1 with a share price re-rate when it delivers the following:

We expect these announcements from EV1 in the next 8 to 12 weeks...

We think a Framework Agreement is a major catalyst for EV1 as it would provide a clear regulatory pathway to production - the ultimate near term goal for EV1.

We have seen other ASX listed companies like Strandline Resources, OreCorp, and Black Rock Mining sign these agreements in Tanzania.

These agreements provide regulatory certainty, making these projects more investable for institutional capital who are often wanting to see the project de-risked before investing.

For example, Strandline, which signed an agreement on 14 December 2021, saw its share price go from ~25c before the agreement to briefly touch all time highs at 51.5c.

We think that move came because the project became investable by larger pools of capital, interestingly it also led to a $50M capital raise by Strandline.

We think similar market attention could come EV1’s way once it has the Framework Agreement signed.

Earlier this week, EV1 confirmed that its revised DFS would now be pushed back to early 2023.

The delays were not without reason though.

EV1 is instead removing a tailings storage facility from its mine design which it hopes will reduce CAPEX, OPEX and the carbon footprint of its project.

Ultimately EV1 is looking to improve on its 2020 DFS which showed a Net Present Value (NPV) of US$323M with a 3.4 year post-tax payback period, based on total capital expenditures of ~US$87M to get the mine into development.

With inflation rising globally, capital costs of building the mine are likely to be higher now than when the DFS was completed two years ago, so we expect costs (the CAPEX figure) to be higher.

Countering the increasing capital cost will be the much higher graphite prices EV1 can run through its economic models.

Overall we think this should improve the overall NPV figure, or at the very least, help counter the higher expenses.

If the cost increases are modest and the NPV materially improves we think the market will respond positively.

The importance of completing this work is more about being able to secure financing partners who will want to see updated estimates for capital costs and future profits, and would be less likely to finance a project based on 2020 estimates.

Any uncertainty on project economics can weigh on a share price, we have seen a few companies announce a DFS where costs blow out and the share price gets dinged pretty hard.

Which is why we think the updated DFS and framework agreement will be the trigger to re-rate EV1 over the coming months.

To see why we are Invested in EV1, what we want to see the company achieve and the key risks to our Investment Thesis check out our Investment Memo here:

SGA and EV1 are our only two long term graphite Investments, each is at a different stage of development, with different benefits.

BOTH are high conviction Investments leveraged to the graphite macro, which we think could be the ‘battery material of 2023’.

Now all we need is for graphite to “do a lithium” in 2023 to see our Picks of the Year really get moving.

SGA and EV1 are two very different Investments at different stages of the resource project lifecycle.

We have made a similar sized Investment in each one in the hope of a 1,000% re-rate on successful project execution and positive macro graphite pricing - specific risks are listed in each Investment Memo.

A quick summary of the two Investments: 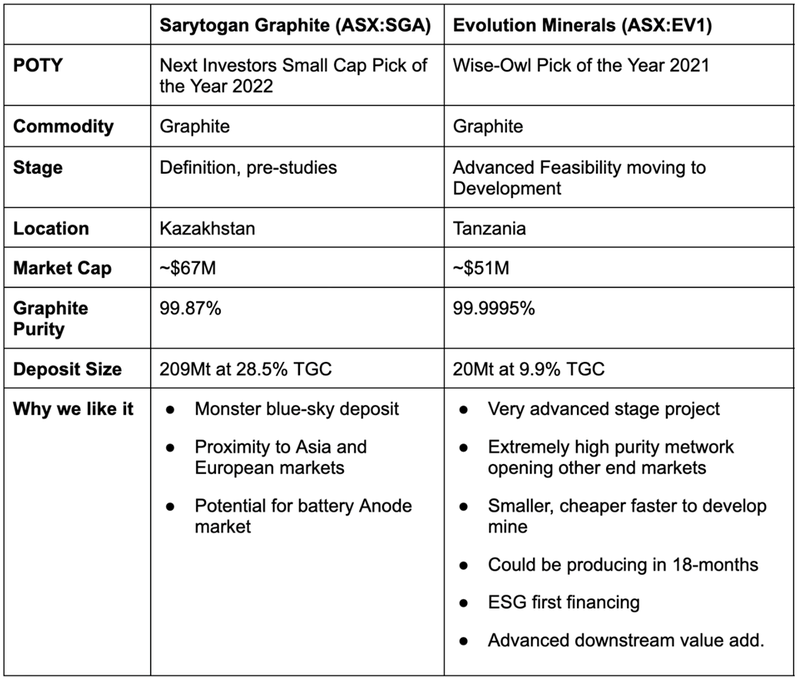 LNR: LNR has visuals of 30m of kaolin from 4m

This week we announced Sarytogan Graphite (ASX:SGA) as our Next Investors Small Cap Pick of the Year for 2022.

This is a label we reserve only for our highest potential Investments.

As with our previous Picks of the Year, we see the potential for this company to re-rate 1,000%+ over the coming 3+ year holding period.

Our last two Next Investors Small Cap Picks of the Year were:

As always, just because these last two picks performed well does NOT mean today’s pick will perform this way - small cap investing is risky and all sorts of things can go wrong.

📰 Read our full Note: Introducing our Next Investors Small Cap Pick of the Year for 2022

This week our lithium Investment Latin Resources (ASX: LRS) took its Brazilian project from discovery to maiden JORC resource estimate, all in under nine months.

With this announcement LRS is following in the footsteps of its $5.5BN Brazilian neighbour Sigma Lithium.

Back in 2018 similarly to LRS, Sigma announced a maiden resource estimate of 13Mt with a lithium oxide grade of 1.56%.

At that time Sigma’s market cap was at a level that’s very similar to that of LRS today.

Just like Sigma in 2018, we think today is just the beginning for LRS.

In other news this week, our cybersecurity Investment Whitehawk (ASX:WHK) announced that its global social media company client re-signed for a further 12 months of cybersecurity protection - with an option to expand.

This comes at a time when cybersecurity is of paramount importance to governments.

With this in mind, we see 2023 as the year WHK capitalises on its deep experience and reach to deliver another significant re-rate.

We’ve been waiting for many months to see EMN’s demonstration plant arrive, with the war in Ukraine forcing the plant modules to come via sea freight from China, and a strike at the German port of Hamburg delaying things.

So it's great to see EMN’s efforts finally bearing fruit and after much anticipation, EMN’s Demonstration Plant is ready to run.

Ramped up product qualification by potential customers courtesy of the demonstration plant is tied to any future offtake deal, something which could be a big catalyst for EMN and potentially, the start of a series of offtakes deals being signed.

We think it’s an exciting time to be an EMN shareholder, as CEO Matthew James leads EMN into a Final Investment Decision.

📰 Read our full Note: EMN Update - We Have a Demo Plant. Now for Offtake Deals

No material news this week: