Our small cap telco investment Vonex (ASX:VN8) is continuing to follow the tried and tested telco playbook of rapid growth through acquisitions of smaller entities.

The goal for VN8 is to get bigger by claiming and retaining market share through buying smaller telcos - which will hopefully lead to VN8 getting taken out by a bigger telco player themselves.

Yesterday, VN8 announced its latest acquisition - this time it's South Australian telco Voiteck that will soon be incorporated into the VN8 group.

For those new to the story, VN8 provides telecommunication solutions primarily for Australian small and medium enterprises (SME).

VN8 has a significant footprint in NSW, Victoria, Queensland and WA - and with yesterday’s deal it has now got a foothold in the SA market.

Here are all the key details on VN8’s latest acquisition - we will unpack the deal in more detail below.

Acquisition consideration to be paid by VN8:

What we like about this acquisition is that Voiteck resembles a mini-VN8 in many respects, which should aid in its integration - it has “an established presence across several niche verticals”. However Voiteck is focused primarily within the South Australian market, which essentially fastracks VN8 expansion into this under-penetrated market.

We also like that the founder and head of Voiteck, Declan O’Callaghan, joins VN8 as part of the deal, which will help with the integration and further penetration of the SA market.

In a nutshell, rather than VN8 expand into SA as a fairly new market entrant, the Voiteck acquisition accelerates customer acquisition and provides multiple cross selling opportunities across a much broader channel partner network.

As we’ve mentioned, VN8’s strategy is simple - accelerate growth through complementary acquisitions - and yesterday’s deal continues the execution of the strategy. 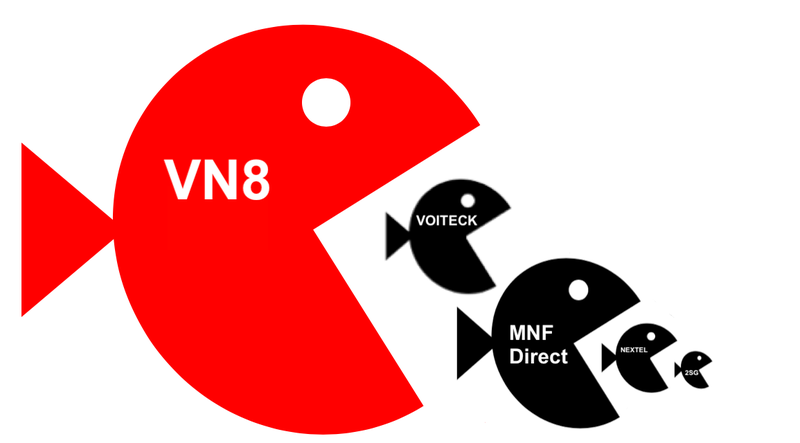 VN8’s ‘hunt-for-growth’ strategy is already paying off on its top line with strong sales growth, and across several financial and operational metrics we track (more on these later).

What we’d like to see in the year ahead is the strategy to deliver across VN8’s bottom line too - with VN8 able to successfully deliver a full cashflow and EBITDA positive FY this year.

We put together a short investment memo on the reasons for our investment in VN8 - which you can read here.

Let’s take a closer look at what the new acquisition looks like and its impact on VN8 going forward.

As we mentioned in our last note, we want to see further VN8 growth, both organically and via acquisitions. The key metrics we track on these fronts are:

To date, VN8’s acquisitions are improving sales fairly quickly. Last quarter, VN8 delivered its best ever sales revenue result, up 47% year-on-year to $6.54M for the 3 months to 30 September 2021.

Following VN8’s biggest, most transformative acquisition to date, the $31M MNF Direct Business transaction that was announced last quarter, ARR jumped up substantially to $32M, whilst PBX users surpassed 80,000. We still havent seen a full year with MNF Direct under VN8 yet so we look forward to continued progress here.

With yesterday’s announcement of the Voiteck addition, the end result post competition of the acquisition is a modest step up in ARR to $34.5M: 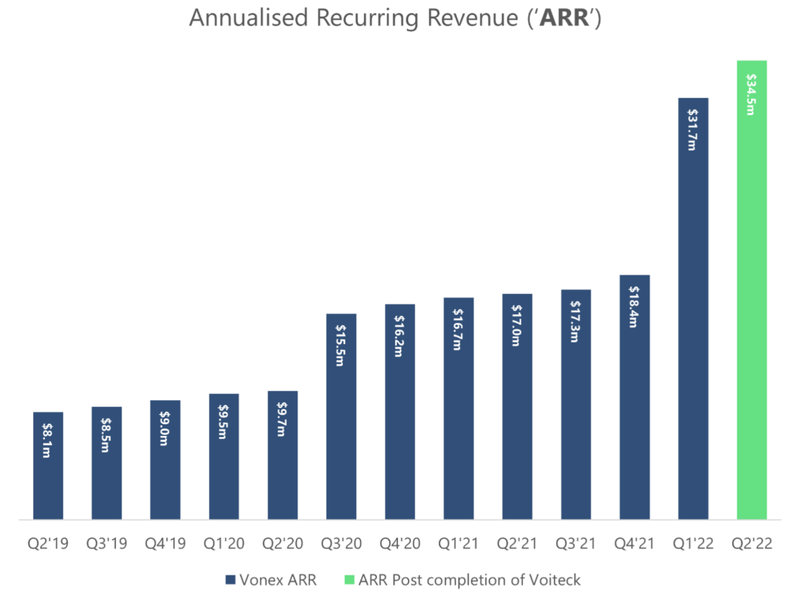 The Voiteck acquisition is to be transacted at 4.5x EBITDA and is double-digit earnings per share (EPS) accretive on a full year basis, which we consider a fair exchange, which should not take too long to pay back the upfront consideration of ~$2.75M.

As we mentioned above, this latest acquisition brings the VN8 customer base to near full mainland Australia coverage - with VN8 now having sizable market share in South Australia adding to its existing Queensland, NSW, Victoria and West Australian presence.

Growth in customer base 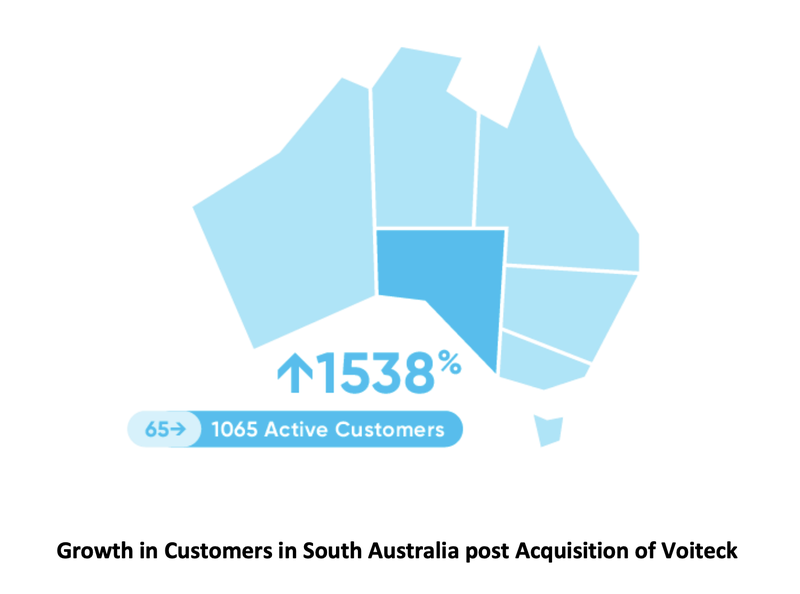 PBX customers are set to exceed 90,000 following the transaction - considering that at the start of the year, VN8 had under half this figure, it seems that the “growth via acquisitions” is certainly fast tracking VN8’s market share and new market penetration.

We note stockbroker PAC Partners also considers the merits of this transaction in detail in its latest research report.

In the report, PAC Partners anticipates VN8’s group revenues to reach ~$36M, almost double FY21’s result. They also project net profit after tax (NPAT) to swing from a $4M loss last year to a $4M profit in this current year.

PAC Partners also retained its “Speculative Buy” recommendation on VN8 with a 25 cents per share price target (about double what VN8 is currently trading at). 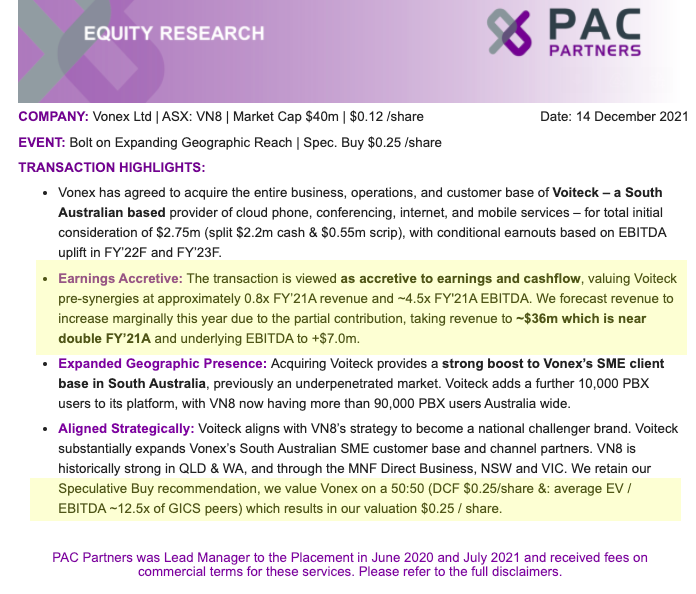 Of course we should add some caution here - analyst price targets are no guarantee of eventuating. We recommend reading the entire report - VN8 Bolt on Expanding Geographic Reach - and the disclosures before forming a view here.

Overall, we like the progress VN8 is making, and expect to see stronger earnings growth as the newest (Voiteck) and biggest (MNF Direct) acquisitions are integrated in the following months ahead.

We think by mid-2022, both acquisitions should be fully integrated into VN8, and so the full impact on ARR, PBX customers and EBITDA will flow through to the financial reports.

We anticipate that VN8 will reach the 100,000 PBX customers milestone in 2H22, based on current growth and considering the existing acquisitions. This would obviously be brought forward if yet another acquisition was tabled.

Here is our VN8 investment strategy 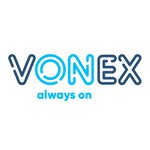