What does TG1 do?

We are currently most interested in: the newly acquired gold project in New South Wales, copper projects in the Ashburton Basin, its copper/gold project in the Paterson Province.

Copper is already the third most widely used metal in the world - and with demand set to increase from things such as electric vehicles and semiconductor wiring — we see it as leverage to the global electrification boom and anticipated commodities supercycle over the coming decade.

Why did we invest in TG1?

Well defined gold prospect that has never been drilled

TG1 has just completed the acquisition of a 90% interest in a gold project in NSW where the previous surface trenching returned 160m @1.2g/t Gold. These targets have never been drilled before and could be indicative of an intrusive related gold system.

TG1 has projects in regions that are home to some of the biggest Copper/Gold discoveries in WA. Ashburton Basin - which hosts Northern Star’s Paulsens Gold mine & the Paterson Province - where Rio Tinto recently made the massive Winu discovery.

We want to see TG1 get an RC drilling program done over the newly acquired gold project before the end of the year.

We want to see the EM targets recently identified at the Harbutt Range prospect drilled in the next 12 months.

Copper is an industrial metal that is reliant on buoyant economic growth, if there is any significant decline in economic activity globally then copper prices are likely to de-rate.

TG1 is a very early stage exploration company with zero revenue and is reliant on continuous capital raises so it can undertake high-risk / high reward exploration programs. There is a risk that market conditions deteriorate and investors shun high-risk explorers like TG1, and TG1 is unable to raise capital without significant dilution of existing shareholders.

TG1 is an early stage exploration company chasing new discoveries. There is always a risk that a market wide sell off will hurt TG1’s share price the most, given investors will look to withdraw capital from the high risk high reward investments in their portfolios first.

Our investment plan for TG1 is the same as for all our early stage, exploration investments:

Disclosure: The authors of this article and owners of Next Investors, S3 Consortium Pty Ltd, and associated entities, own 1,250,000 TG1 shares at the time of publication. S3 Consortium Pty Ltd has been engaged by TG1 to share our commentary and opinion on the progress of our investment in TG1 over time.

Our Past Commentary on TechGen Metals Ltd

This morning our junior exploration Investment Techgen Metals (ASX: TG1) confirmed that it has secured an RC rig for its upcoming drilling program at its gold project in NSW.

With the RC drilling rig secured, TG1 expects its drilling program to commence on 15 July 2022.

We covered the various targets TG1 has identified at its gold project in our most recent TG1 note which you can read here: Microcap TG1 pinpoints gold drill targets.

Importantly, none of these targets have been drilled before, and TG1 will be the first company to drill test the structures beneath the surface trenching work. 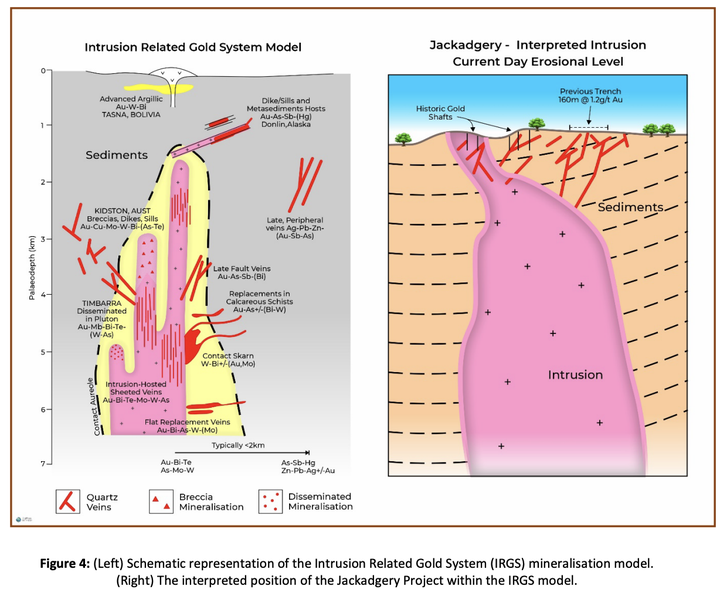 This morning our junior exploration Investment Techgen Metals (ASX: TG1) put out the results from some geophysics work done over its copper project in the Ashburton Basin, WA.

Importantly both of the chargeability highs sit right on top of the high grade copper rock chips where TG1 returned grades as high as ~54.8% copper and 249g/t silver. 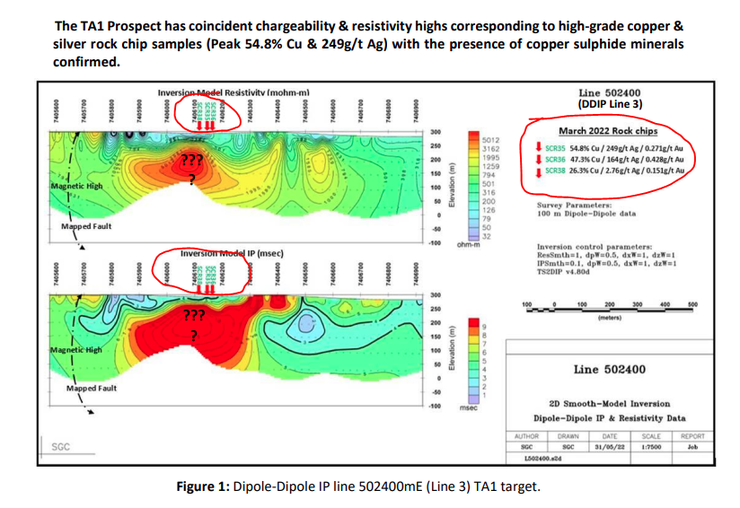 This means that the company now has both geophysics and geochemical works pointing at the same spot across two targets (TA1 & TA2).

TG1 also confirmed in the announcement that approvals were in place for the drill testing of these targets to commence in the coming months. We are hoping those red anomalies can translate to a new discovery.

After a ~3 week due diligence process TG1 today announced that it had completed the acquisition of the project.

The project has never been drilled before and has drill ready targets where surface trenching has returned 160m @1.2g/t gold with higher-grade intervals including 5m @ 18.0 g/t gold and 5m @ 7.1 g/t gold).

TG1 also confirmed that its maiden RC drilling program is now planned to “commence in mid-2022” which means we won't be waiting too long for drilling to start.

The market's response so far to the acquisition has been relatively muted with the share price moving from 13c per share to now trade at ~14c per share. We suspect this has more to do with general market sentiments especially considering the S&P 500 is having days where the index is down 2-4%.

The positive news is that since the acquisition both directors Andrew Jones and Ashley Hood have gone onto market and purchased a combined $15k in shares at ~15c per share (a premium to the current market price).

The purchases aren't massive but it's always nice to see the company’s directors go on market and start buying shares.

With drilling programs being prepared across the company’s copper/gold prospects in WA and at the newly acquired gold project in NSW, TG1 is moving into a relatively busy drilling season where the company will be taking a number of shots at new discoveries.

To see all of the key objectives we want to see TG1 achieve in 2022, the reasons why we continue to hold TG1 in our portfolio and the key risks to our Investment thesis, check out our 2022 TG1 Investment Memo here.

This morning TG1 announced that it had returned 54.8% copper and 249g/t silver in rock chips from recent fieldwork at its Copper project in the Ashburton basin in WA. Below is an image of the copper filled rock chips. 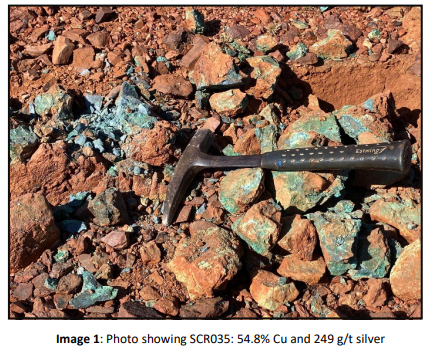 Interestingly the rock chips were taken from right above a northeast to southwest trending splay fault.

Our armchair geologist interpretation is that the fault-lines and intersections between them often mean an increased probability of mineralisation occurring below the ground, which comes about from thousands of years of rock-movements well below the surface. 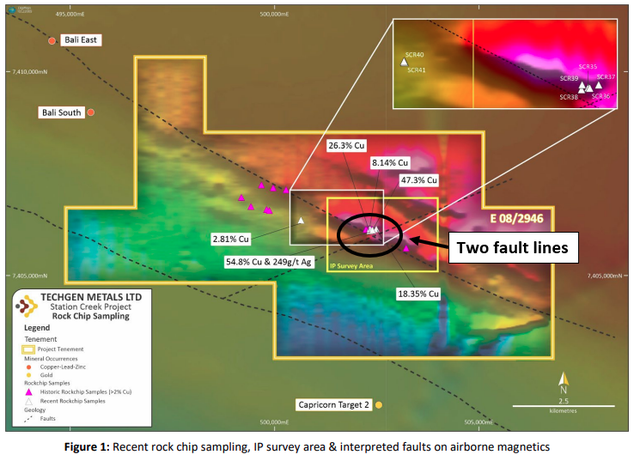 TG1 have now confirmed that they will start to overlay these rock chip samples with some ground based IP surveys (Geophysical surveys) to see if there are any anomalies worth drill testing below the ground.

Basically, TG1 has run through the typical target generation works process from Geochemical sampling (Rock chip sampling) to then moving into Geophysical surveys before putting together a list of high priority drill targets.

We are yet to launch our 2022 Investment Memo for TG1 but will be looking forward to the results from the geophysical surveys and incorporating these into the “what we want to see the company achieve in 2022” section of our memo.

What’s next for TG1: We want to see the results from the geophysical survey above. At the same time we are waiting for heritage surveys to be completed at the Mt Boggola copper project.