As the global energy crisis rolls on, lithium is back as the story of the week.

A vital component in batteries, the lithium price is now up 300% from a year ago, at near record highs above US$71,000/t.

And with tight supply forecast through 2025, prices still have even further to rise — multiple analysts have lifted their price targets by 20-40%.

With the outlook for lithium remaining strong for years to come, this week we announced early stage lithium explorer Tyranna Resources (ASX:TYX) as our Catalyst Hunter 2022 Pick of the Year.

TYX is focused on making a new hard rock lithium discovery in Angola and says it will commence the first ever lithium exploration campaign into this project in Q4 2022.

We believe they have a good chance of making a significant lithium discovery.

Much of that belief has to do with TYX’s Technical Director, Peter Spitalny, an exploration geologist who was behind AVZ Minerals’ multi-billion dollar lithium resource in the DRC — now one of the largest undeveloped hard rock lithium deposits in the world. 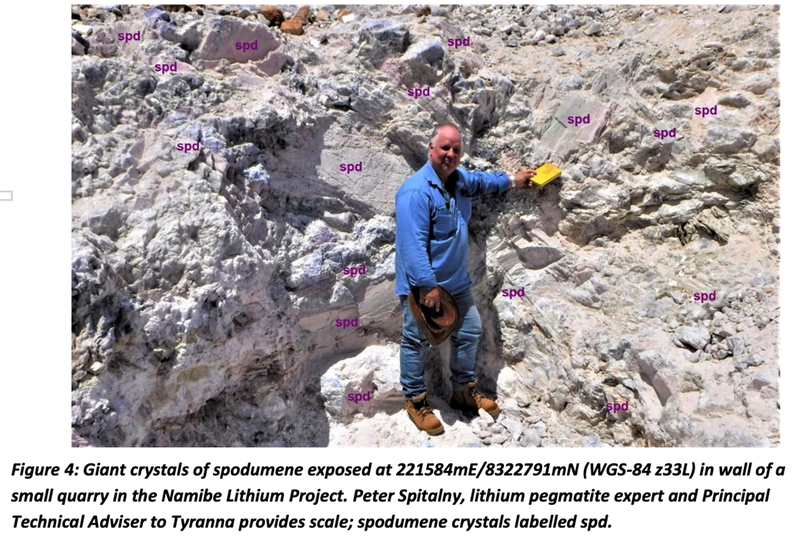 His work at AVZ saw its share price rise from 4.3c to a peak of $1.35, with AVZ trading on a market cap of $2.7BN, prior to its voluntary suspension in May.

Peter found and brought this new lithium project to TYX, has now joined the TYX board, and will become a substantial shareholder of TYX if his performance shares convert on successful performance milestones.

TYX’s project has never been properly explored or drilled for lithium before, yet it has over 600 different outcropping pegmatites (pegmatites being the main source for hard rock lithium deposits), and research has indicated the presence of spodumene — an indicator for high grade lithium mineralisation.

Our big bet for TYX: We hope that TYX discovers and defines a large, simple to process lithium resource that is on par with world class multi-billion dollar ASX peers such as Pilbara Minerals, Core Exploration, and Liontown Resources, AVZ Minerals, and Sayona Mining.

TYX is preparing for the first ever drill campaign on its unexplored project — scheduled to commence in the next quarter, we don’t have long to wait.

On the topic of EV batteries and the energy crisis, this week we also provided an update on our 2021 Wise Owl Pick of the Year and graphite Investment, Evolution Energy Minerals (ASX:EV1).

Along with lithium, graphite is another critical and non-substitutable EV battery material, making up around half of a battery’s ingredients.

This is a rapidly growing market. Over the past 12 months we’ve seen the big automakers move quickly to secure battery materials supply as global EV sales jumped by more than 50% from January to July this year.

On top of this, with a bit of downstream processing, graphite is used in nuclear energy which is currently being embraced amid the ongoing global energy crisis.

Our Big Bet for our Investment in EV1: EV1 will achieve first production of the world’s most sustainably produced graphite by early 2024 (including value adding processing) — coinciding with the onset of a long-term supply shortage in the graphite market.

EV1 has an advanced graphite project in Tanzania and is now coming up on a Final Investment Decision to build its “ESG First” graphite mine. It is soon to release an updated Definitive Feasibility Study and already has an ESG fund as a cornerstone investor.

We recently Increased our Investment in EV1 and have not sold any shares since we first Invested back in 2021 as we believe there is a strong chance that EV1 will deliver first graphite production before 2024 given:

Read our full Note on EV1 from this week: Increased Investment: “Value added” Graphite for Electric Vehicles and Nuclear

Today’s update is a quick summary of what we released this week.

We realise this was a bit like a “simpsons flashback episode” but we have an early start today and are busy all day on a site visit to a new seed Investment we recently made in a seaweed technology business in Port Phillip Bay.

The company is growing Asparagopsis, a special type of seaweed which can be mixed into cow feed to reduce methane emissions (basically from cow farts and burps) — methane from agriculture is a significant contributor to global emissions.

While this Investment doesn’t have any plans to list on the ASX, it is still quite interesting — see what it does here.

When we are first Investing in a company, we put together an Investment Memo that outlines what the company does, the macro investing theme it sits in, why we like the company, what we expect them to achieve over the next 12 months, the near term risks and our investment plan.

To complement our Investment Memos, we have started using “progress trackers” to help digest CURRENT news within the context of previous announcements, all of which contribute to a singular long term objective the company is trying to achieve.

Regular readers may have seen some of these trackers already, but here is a list of the trackers we have shared so far and some of the new ones we put together this week.

Tyranna Resources (ASX:TYX) - TYX is planning a drilling program to prove that outcropping pegmatites at its project extend undercover enough to confirm a lithium discovery.

Evolution Energy Minerals (ASX:EV1) - EV1is working to achieve the world’s most sustainably produced graphite by early 2024 (including value adding processing), coinciding with the onset of a long-term supply shortage in the graphite market.

Noble Helium (ASX: NHE) - NHE is chasing a helium resource that has the potential to be the third largest helium reserve in the world. NHE plans to drill test its project in 2023.

Dimerix (ASX: DXB) - DXB is an early stage biotech research company that is developing an anti-inflammatory drug to treat respiratory and kidney diseases, with potential applications to treat COVID.

88 Energy (ASX: 88E) - 88E will be looking to replicate the success of its $1.9BN neighbour on the north slope of Alaska - the home to the biggest oil discovery ever made in the US (Prudhoe Bay). 88E is gearing up for a 2023 drilling program to test the same reservoir units its neighbour has had success drilling into.

Sarytogan Graphite (ASX: SGA) - SGA only recently IPO’d and is still relatively early in proving out a giant graphite resource. SGA’s project has the highest grade graphite on the ASX, and has the second highest contained graphite of any ASX listed company.

Galileo Mining (ASX: GAL) - After 18 months of drilling, GAL made a PGE discovery at its Norseman project, off the back of the discovery GAL raised $20M and is now looking to grow the size and scale of its new discovery. Below is our progress tracker for GAL’s PGE discovery.

Tempus Resources (ASX: TMR) - TMR is trying to make new gold discoveries at its Canadian gold project, which has produced some ~230k ounces of gold in the past. With processing infrastructure already in place, we are holding TMR to see it make new discoveries that it can then feed through its mill.

SGA: Graphite drilling ramps up with second rig on site

TEE: Update on neighbours exploring for gas in the Northern Territory

TG1: TG1 brings in Rio Tinto as a project partner

With lithium prices at all time highs and still rising, we have Invested in early stage lithium explorer, Tyranna Resources (ASX:TYX),naming it our 2022 Catalyst Hunter Pick of the Year.

TYX has a promising, unexplored project in Angola that has over 600 lithium bearing rocks sticking out at the surface.

The company expects to commence the first ever lithium exploration campaign on the project in Q4 2022, where we are hoping for a material lithium discovery.

Our graphite Investment and 2021 Wise Owl Pick of the Year, Evolution Energy Minerals (ASX:EV1), is coming up on a Final Investment Decision to build its “ESG First” graphite mine in Tanzania.

EV1, which already has an ESG fund as a cornerstone investor, has an updated Definitive Feasibility Study due shortly and has been steadily chewing through every key milestone we set for the company since its IPO last November.