It’s been a very busy week for us as we followed key events that positively impacted some of our investments in VUL, EMN and PRL - and today we provide a few extra comments on what happened with some of our other portfolio companies.

But before we get into what happened this week...

BREAKING NEWS: A couple of hours ago Reuters broke the story that the Stellantis’ lithium offtake MoU from geothermal brines in Europe is with Vulcan Energy (ASX:VUL) but they haven’t revealed their source of this info... 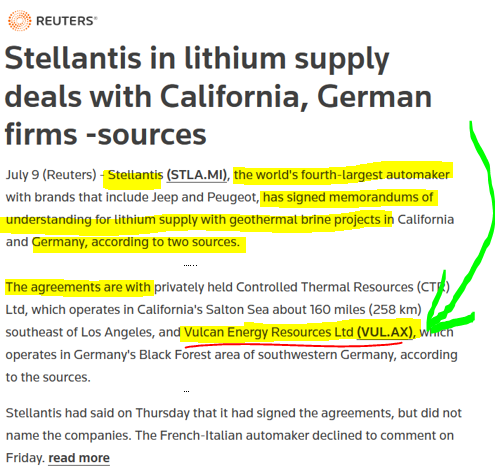 We are watching developments closely and expect to find out more on Monday....

This week we also continued to review potential new opportunities but we haven’t made a new investment in a while - only two new stocks have been added to our portfolio so far this year in ONE and BPM.

We hope to announce a new investment in the coming weeks.

As our investment portfolio grows we are looking for a super star equities analyst specialising in small cap stocks to join our small team of seven in Melbourne.

This is a rare opportunity working directly with the Next Investors founders helping to analyse potential small cap investments and the ongoing progress of our portfolio investments.

Please respond to this email if you or somebody you know are interested. We are interviewing candidates with a broad range of experience so as long as you are smart, analytical and passionate about small cap stocks we would love to hear from you.

📰 Here’s what happened this week on Next Investors

General Motors (one of the biggest car companies in the world) announced that it had signed a “strategic investment and commercial collaboration” to secure supply of sustainably produced lithium from geothermal brines locally in California.

We understand this was the world’s first offtake of lithium produced from geothermal brines, and a big vote of confidence in the concept.

You can read all about it here: World First: Lithium from geothermal brine offtake deal signed in the USA

We wrote that GM was the first cab off the rank to secure and own a sustainable lithium supply from geothermal brines, which could be a huge boost to our investment in VUL if other automakers start rushing to put their foot on their own lithium supply.

Then just a few days later we stayed up to watch Stellantis (Europe's biggest car maker by volume ) announce not one, but TWO offtake MoUs to secure lithium from geothermal brines - one in the US and one in Europe.

You can read all about it here: Stellantis EV Day: Mystery European Geothermal Lithium MoU & Manganese to be used in all batteries

We are very surprised to see THREE offtake agreements for lithium from geothermal brine announced in just one week.

We think this could be the start of a scramble to secure green, sustainable lithium supply as big car manufacturers get FOMO seeing the flurry of offtake deals being announced by their competitors - watch this space.

BREAKING NEWS: A couple of hours ago Reuters broke the story that the Stellantis’ lithium offtake MoU from geothermal brines in Europe is with Vulcan Energy (ASX:VUL) but they haven’t revealed their source of this info... we are watching closely and expect to find out more on Monday.

Euro Manganese (ASX:EMN) also got a win from the Stellantis EV day after it was revealed that both Stellantis’s battery types would have manganese as a key ingredient.

Whatever the reason, we think PRL could ultimately benefit from the increased activity in the area.

🗣️ Quick Takes - Our Other Investments:

We invested in $16M capped BPM for its lead-zinc project 40km away and along strike from $310 capped Rumble Resources’ massive lead-zinc discovery in the Earaheedy Basin, the same region that BPM has its ground.

BPM’s neighbour Rumble is currently running a 30,000m drilling campaign, and we are watching for any results that might have implications for BPM. This week Rumble increased its mineralisation footprint by 125% after drilling the four step out holes - and bumped up its exploration target to 100-120mt as a result.

So in short, Rumble’s discovery is getting bigger - we are looking forward to BPM’s planned drilling in a few months time.

Today IVZ advised the market that a non-binding farm in agreement signed in December 2020 was terminated at the due diligence stage. This can happen in commercial transactions and is not unusual.

We didn’t think this news was a big deal and the market didn’t seem to either as IVZ says it has a bunch of other interested parties in the mix. We continue to hold IVZ expecting a run up in the lead up to drilling which is still a while away - we are less than two months from the 12 months cap gains discount.

IVZ’s near term focus is completing a seismic acquisition programme which should be done before the end of this quarter - we hope that will identify some solid drill targets for IVZ.

Since drilling commenced in September last year, LCL has announced long, rich gold intercepts at its Tesorito prospect in Columbia.

This week LCL announced the first assays from its neighbouring Ceibal porphyry target, with gold mineralisation reported along the entire core-lengths from the first two drill holes.

Whilst these early results don’t yet signal Ceibal as the next Tesorito, it is still a step in the right direction for confirming the size and scope of the deposit.

This week CPH Non Exec Chairman and related entities sold down CPH shares on market - reducing % ownership from 16.24% down to 10.31%. There were also some options sold off market which are expected to be exercised by the new owner.

Whilst he still has a significant stake at over 10%, management selling is never a great signal to the market. The announcement says the sale relates to a $4M unsecured interest free loan provided to the company in Q4 2020.

The market seemed to be okay with it though, as the CPH price held up after the selling was announced.

On a positive note CPH secured a purchase order from a Red Light Holland subsidiary to the value of A$212,220 - a sign the two companies are working closely together ahead of the planned merger.

CPH announced the ticking of a regulatory box for importing its animal health products into Uruguay - keep those announcements coming CPH...

This technology will likely complement AHI’s existing suite of scanning capabilities, opening it up to new opportunities.

The companies are now updating the binding acquisition agreement, which will see a material reduction in the acquisition amount previously announced.

🦉In our other portfolios 🏹

Auroch Minerals (ASX: AOU) has uncovered a very high priority nickel drill target that it intends to drill test immediately. This decision to instantly drill this new target was based on the target’s size, strength and location and the company will be poking three RC drill holes ranging between 150-250m in depth in the coming days.

This drilling will lead into the Nepean Deeps drill programme, which is scheduled to begin later this month – this is a major catalyst for AOU.

AOU is also currently awaiting results for the recent RC programme at its Leinster Nickel Project.

The acquisition of this new lithium project next to the one it already has, puts ARN in one of the only locations in the world where a hypothetical battery gigafactory could be built alongside all the natural resources to meet its needs.

ARN also announced that they have pegged holes for drilling at their Nickel project and we expect drilling to commence very soon.

LRS is another of our Catalyst Hunter investments as we wait for it to catch up to its bigger brother $365M capped Andromeda, and we are familiar with this space.

Goldman Sachs are calling copper the ‘new oil’ and whether that is true or not, a multi year bull market for copper on the back of green CAPEX spending does sound pretty good for TG1.

AFR: Wesfarmers and rivals charge down the road with lithium

The Verge: General Motors strikes a deal to source lithium in the US for its electric car batteries

Our recap of this week’s Sydney Energy Conference

Tax loss selling over, market back in August?