The Next Oil Rush’s top energy pick, Elixir Energy (ASX:EXR) has kicked off its second year drilling campaign exploring for coalbed methane (CBM) — or coal seam gas (CSG) as it’s known in Australia — at its 100% owned project in Mongolia.

We now know that the very thick coals identified at Nomgon-1 are fully (100%) gas saturated, suggesting Elixir may have a very energy intensive per acre gas resource.

The project’s scale, the company’s exploration results to date, its 100% ownership, and its proximity to a gas hungry China, suggests that EXR has what it takes to attract a high quality farm out partner in the future.

But Elixir must first continue to prove up the resource potential and value of its ground with a planned contingent resource booking.

EXR report that 2D seismic acquisition is also underway, while new coal outcrops have been identified in various locations across the PSC.

The location of these are consistent with Elixir’s prospective resource estimates and support the view that the very large licence area is likely to host numerous coal bearing sub-basins that are prospective for coal seam gas.

The company’s seismic contractor commenced the acquisition of 2D seismic on 30 June, in the North-West part of the 30,000km2 licence area. The total 106km2 acquisition program should be finished by early August and subsequent processing will take around another month after that.

Follow up appraisal drilling over the coming months will involve one core hole and 3 strat holes. Exploration work will include 2-4 more strat-holes plus the 106km2 of seismic.

Here at the Next Oil Rush we are long-term holders of Elixir Energy. We first added it to our investment portfolio over a year ago and remain long term investors.

The company now has new momentum commencing its follow up exploration campaign, which was supported by its recent heavily oversubscribed capital rising.

EXR’s share price has up by as much as 90% since our May update, with the company completing a heavily oversubscribed Placement and SPP in that time.

Work is well underway in proving up the potential in EXR’s vast PSC block and ultimately bringing in high quality partners who can help bring a very large potential resource into production.

With an intensive, fully funded work program through until the end of 2020, we expect to see a number of high potential share price catalysts ahead for EXR. 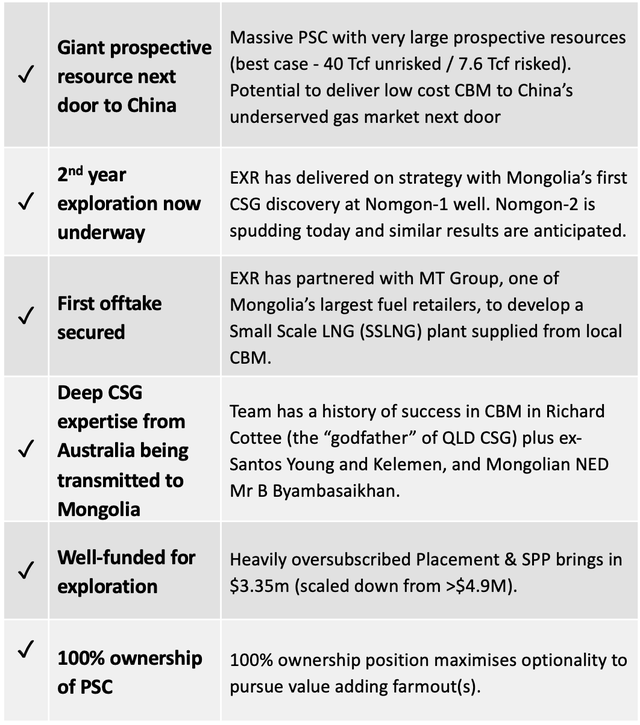 In February the company announced that it has made Mongolia’s first ever certified gas discovery and is it now pushing forward with its second season of drilling ahead of a planned contingent resource booking.

Elixir has announced that the company’s appraisal and exploration program has now started in line with its previously outlined plans.

The Nomgon-2 appraisal core-hole well was spud last night and should reach total depth by around the end of the month or in early August.

In this second-year work program at the Nomgon IX PSC, EXR will appraise the Nomgon-1 CSG discovery and provide further data for a contingent resource booking in the Nomgon sub-basin, which is targeted for the year’s end.

Recent field work along with data collection and analysis has identified new areas of coal outcropping in various parts of the PSC area. The location of these are consistent with Elixir’s prospective resource estimates and support the view that the very large licence area is likely to host numerous coal bearing sub-basins that are prospective for coal seam gas.

Elixir’s Managing Director, Mr Neil Young, said: “Our appraisal and exploration program has now started in line with our plans and we look forward to receiving the results therefrom to integrate with the results of Nomgon-1 over the rest of this year.” 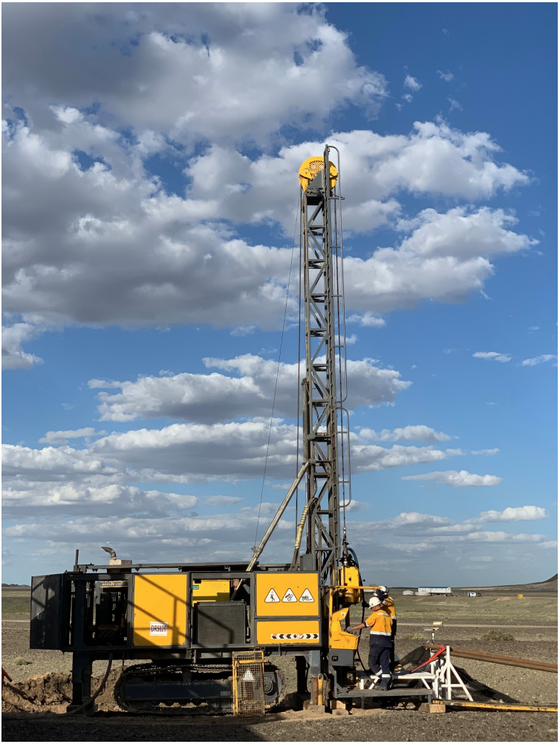 On 30 June, the company’s seismic contractor commenced the acquisition of 2D seismic in the North-West part of the 30,000 km2 licence area. 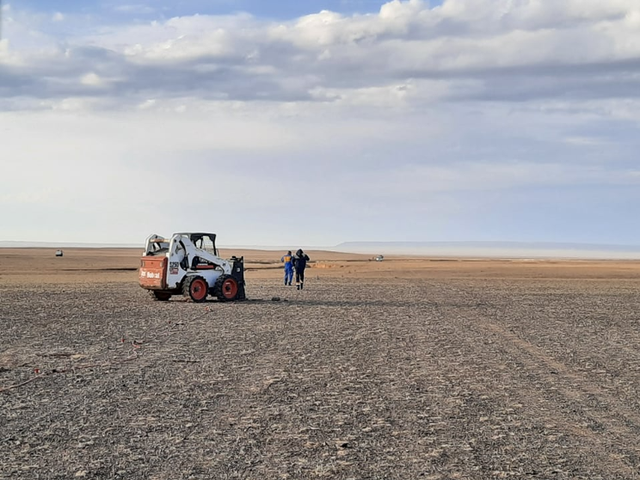 A seismic acquisition friendly environment in the South Gobi

EXR is acquiring new 2D seismic data along prospective trends and explore in new sub-basins that will involve drilling on 2019 and 2020 seismic.

The total 106km2 seismic acquisition program should be finished by early August and subsequent processing will take around another month after that.

At this point EXR anticipate 2 to 4 strat-holes and a second possible core-hole. 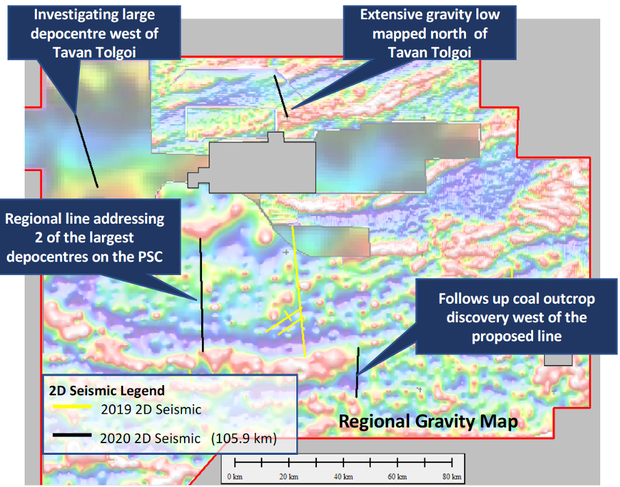 The company is targeting an independent contingent resource booking by the year end — a move that will greatly enhance its farm-out options.

As covered in my last article, EXR Now Days Away from Multi-Well Gas Drilling Campaign in Mongolia, on 26 June, Elixir provided the final gas content figures from its Nomgon-1 post well analysis.

While gas content results can be hard to compare as reporting is often poorly done and is quite inconsistent, the results reported by EXR seem to compare very well with CSG projects globally, including to a number of recognisable names in Australia.

While the results were delayed to some extent by COVID-19 disruptions, they were well worth waiting for with fully gas saturated coals having been identified, paving the way for a coal seam gas pilot production test, a potential farm-out and ultimately a field development.

Not only has this substantially increase the company’s ability to establish a commercially viable gas production operation, but the presence of fully gas saturated coals sets it apart from many other players in the industry.

It is worth noting that the Galilee and Cooper Basins in Australia that are home to blue-chip energy players commonly have saturations in a range between 60% and 70%.

News of these adsorption testing results was covered by Finfeed:

Elixir has a flexible drilling program planned of 1-2 coreholes and up to six strat-holes. Drilling plans include a mix of a fully tested core-hole(s) and strat-holes and all drilling is turnkey — fixed price per metre drilled.

Here’s the delineation and exploration programs planned for the coming months: 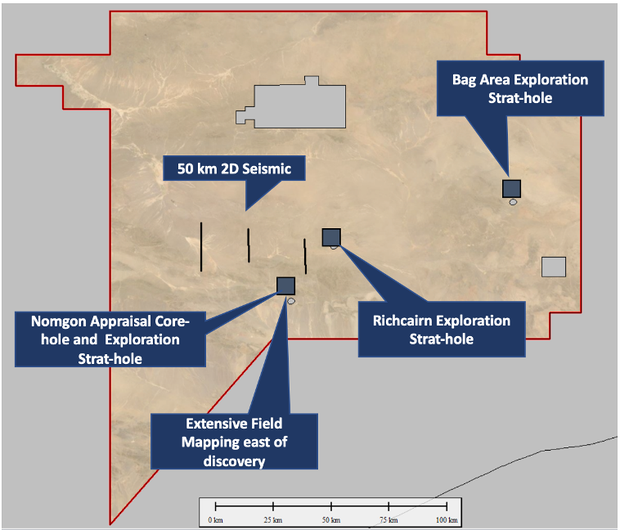 Spud just the start of newsflow to come

As it works to improve its understanding of the region, Elixir has many more coal targets available. The drilling program now underway provides an opportunity to appraise all coals in the sequence.

The exceptional potential of Elixir’s prospective CBM assets, their proximity to the Chinese market for gas, and the expertise of its management team and board are what initially attracted us to the company.

Having recently doubled our shareholding as exploration progresses, we are backing our view on EXR, which continues to hold a central position in our investment portfolio.

Mongolia successfully contained COVID-19 with strong border controls, so unlike many of its peers that have been impacted by the global pandemic, Elixir plan to actively carryout its exploration plans over the coming months with a view to book a contingent gas resource later this year.

That means there’s plenty of newsflow ahead as Elixir continues to attract attention from the market and from potential partners down the track.