Fresh off the back of a high demand capital raise, Elixir Energy (ASX:EXR) is set to put those funds to work in the form of a drilling and seismic campaign to kick off in the coming days.

Elixir is exploring for coalbed methane (CBM) — or coal seam gas (CSG) as it is known in Australia— at its 100% owned CBM Production Sharing Contract (PSC), the Nomgon IX CBM PSC, located in Mongolia.

The size of this project is significant — a huge swathe of 30,000km2 (or 7 million acres), right on the border with China.

A project of this scale, coupled with its proximity to a gas hungry China, means it has the scale to attract a high quality farm out partner in the future.

But EXR first have to continue to prove up the resource potential and value of its ground and the company is moving swiftly in this direction now.

It’s first year of exploration yielded Mongolia’s first ever gas discovery, and the follow up appraisal plan over the coming months will involve one core hole and 3 strat holes. Exploration work will include 2-4 more strat-holes plus 106km2 of seismic.

It’s full steam ahead in Mongolia, with the country having successfully contained COVID-19 due to strong border controls.

Crucially for EXR, it means the company can stay active over the coming months.

Here at the Next Oil Rush we are long-term holders of Elixir Energy and we recently doubled our holding in the stock.

We first added EXR to our long-term investment portfolio almost a year ago, in July 2019. It has been a bumpy ride since then due to various factors such as COVID-19, the fall in commodity prices, etc — but the company seems to have new momentum in 2020, with the stock surging 66% since our most recent update in late May.

What attracted us to Elixir was our recognition of the exceptional potential of its prospective CBM assets, their proximity to the market for gas in China, and the expertise of its management team and board.

The numbers reported compared very well to projects globally, including a number of recognisable names that have more advanced projects but are arguably further from end markets of the vast size and quality of China.

Reflecting its success at Nomgon-1 and the successful containment of COVID-19 in Mongolia, EXR recently completed a heavily oversubscribed Placement and Share Purchase Plan (SPP) to fund expedited delineation and further exploration efforts.

The company is now undertaking a stepped approach where it plans to prove up its discovery through small scale LNG and/or power developments to demonstrate commerciality to potential farm-in partners.

While farmouts are somewhat difficult currently with coronavirus still being a concern, this initial activity will open up better conversations and provide a strong foundation for a favourable deal.

Having spoken to Elixir Managing Director Neil Young, we can reveal that the company has been approached by various multinational equipment suppliers and experienced personnel, all expressing interest to get involved in the small scale LNG project.

While there is nothing new set in stone, the company is open to welcoming farm-in partners in the future.

Looking ahead to the upcoming drilling and seismic program, we can expect activity and associated newsflow to rapidly pick up. Longer term, EXR has an eye on proving up the potential in its vast PSC block and ultimately bringing in high quality partners who can help bring a very large potential resource into production. 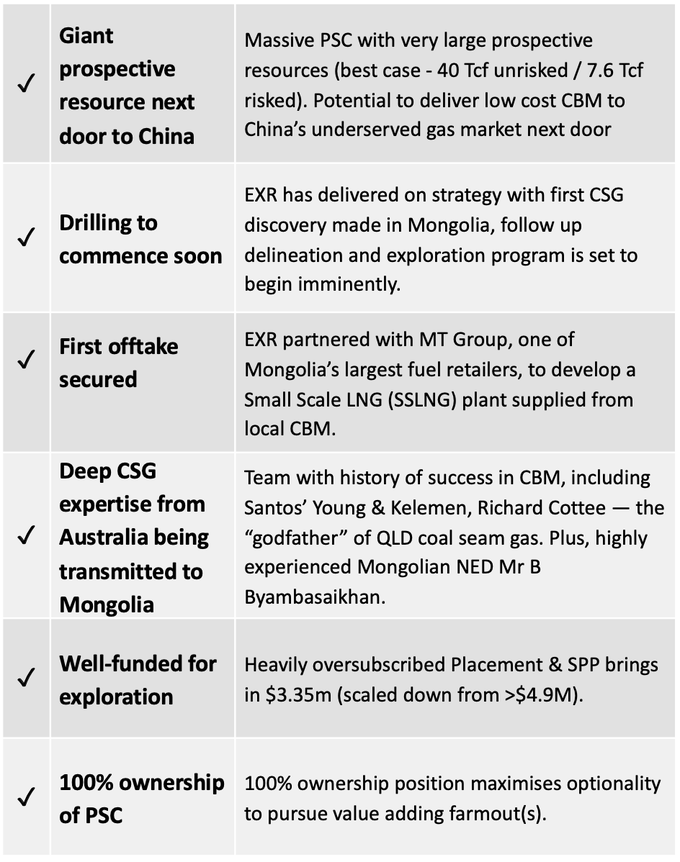 The company completed its initial exploration program in February, capped off with Mongolia’s first ever gas discovery at the Nomgon-1 well and is now pushing forward with its second season of drilling.

On news that EXR had discovered thick gassy coal seams at its Nomgon-1 well in February, the company’s share price spiked from <2¢ to more than 5¢.

Unfortunately, COVID-19 fear soon hit the market bringing the stock back to its pre-discovery level (offering exceptional buying opportunity). It has since steadily climbed back from its March lows of 1.7¢.

During this time the company completed a heavily oversubscribed Placement and SPP at 2¢. It has since continued to rise and is currently trading at 3.5¢ per share.

Note that this is still well above its February peak and offering the potential upside ahead of the July drilling program.

As I reported on 26 May, at Next Investors we have doubled our investment in EXR...

Elixir: back in the field

In its second-year work program at Nomgon IX, EXR will appraise the Nomgon-1 CSG discovery and provide further data for a contingent resource booking in the Nomgon sub-basin, which is targeted for the year’s end.

It will also acquire new 2D seismic data along prospective trends and explore in new sub-basins that will involve drilling on 2019 and 2020 seismic.

As you can see above, Elixir is targeting an independent contingent resource booking by the year end and is working to enhance its farm-out options.

Elixir is now in the process of appraising its Nomgon-1 discovery and exploring the greater PSC area.

In a presentation released to the ASX on 26 June, Elixir has provided the final gas content figures from its Nomgon-1 post well analysis.

(* Proximate analysis undertaken over selected samples, not all sample.)

But what do these figures mean?

The important figure to note is Elixir’s reported Average Gas Content (DAF) figure of 8.9 m3/t, as most gas contents quoted are done on a DAF basis, rather than Raw.

That said, gas content reporting is often poorly done and is quite inconsistent, making it extremely difficult to compare results.

For example, many companies will only report their good results, or only provide broad ranges, or don’t even define the unit of measurement.

Yet the figures reported by EXR do seem to compare very well with CSG projects globally, including to a number of recognisable names in Australia.

In fact, a comparison of EXR’s gas content results to those that we can comfortably trust, reveals its 8.9 m3/t gas content figure from the Nomgon-1 well to be good.

Take for example, Galilee Energy’s flagship Glenaras Gas Project in the Galilee Basin in central Queensland that has a reported 5.3 m3/t.

Similarly, Sunshine Gas’ Lacerta CSG field in the Surat Basin in Queensland — which is now owned by Senex Energy — has a reported maximum 5.0 m3/t.

Also in Queensland, is Comet Ridge’s Mahalo Project where average gas content ranged between ~5.0 and 7.6m3/t. 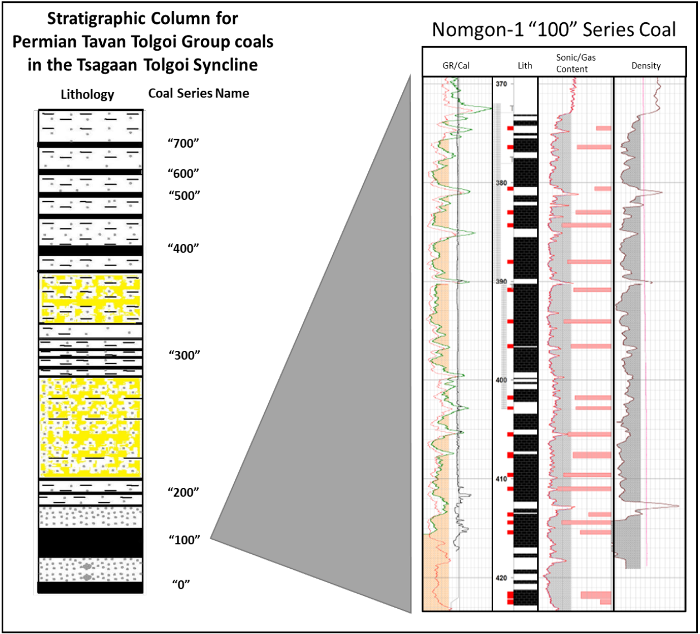 Elixir’s upcoming drilling program is an opportunity to appraise all coals in the sequence, as seen above.

The Nomgon-1 “100” coal was drilled at optimal location in the field and while the “100” series coal could thin away from Nomgon-1, it may deliver stronger permeability.

As it works to improve its understanding of the region, EXR has many more coal targets available.

Second year program back on track

EXR is undertaking a stepped approach where it plans to prove up its discovery through small scale LNG and/or power developments to demonstrate to potential farm-in partners.

The company has a flexible drilling program planned of 1-2 coreholes and up to six strat-holes. Contracts have been awarded to a local drilling contractor and seismic outfit — the same companies as were used during the year 1 drilling program — and teams are now ready to move.

Drilling plans include a mix of a fully tested core-hole(s) and strat-holes and all drilling is turnkey — fixed price per metre drilled.

Here’s the planned delineation and exploration programs for the coming months: 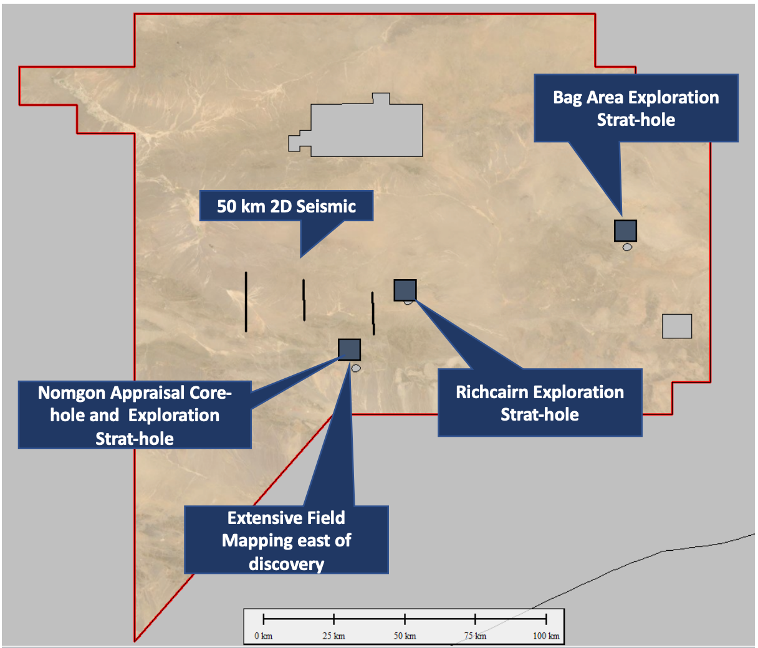 Laboratory analysis is largely completed as is field mapping. The company are planning for 1 core-hole and 3 strat-holes.

The upcoming 2D seismic acquisition program for 2020 is focused on a large number of exploration targets. The company notes that there will be multiple options to amend program as information, including seismic results, come in.

At this point EXR anticipate 2 to 4 strat-holes and a second possible core-hole. 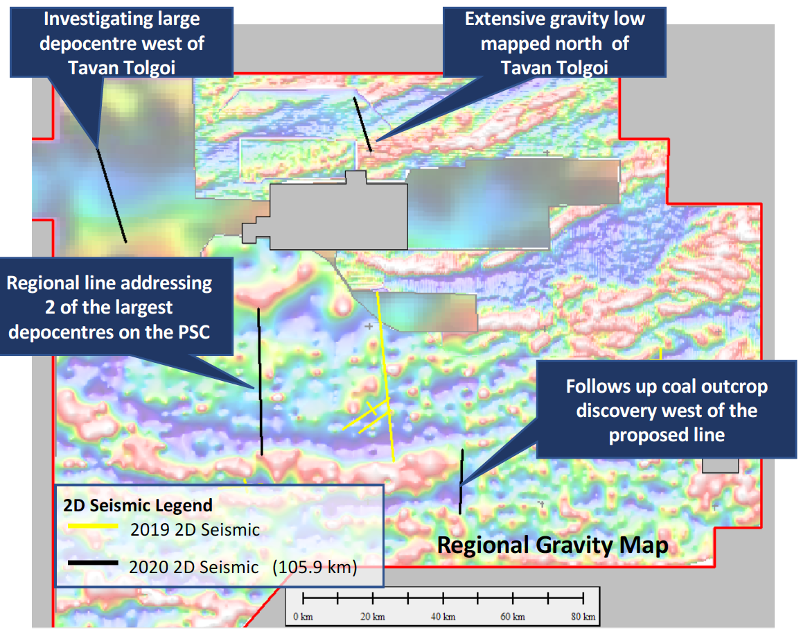 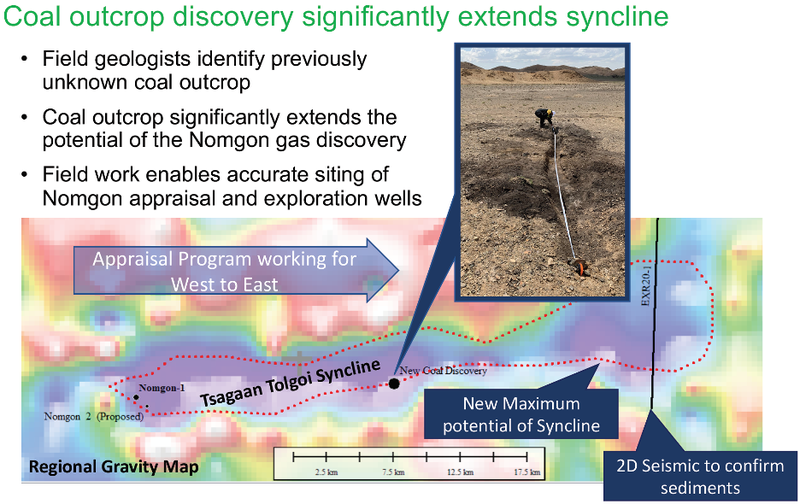 There is a clear existing market in terms of the very large local coal trucking fleet that could operate on clean gas rather than expensive diesel. In China, just to the south of the PSC area, there are over six million gas fired vehicles on the road and SSLNG plants are now commonplace. 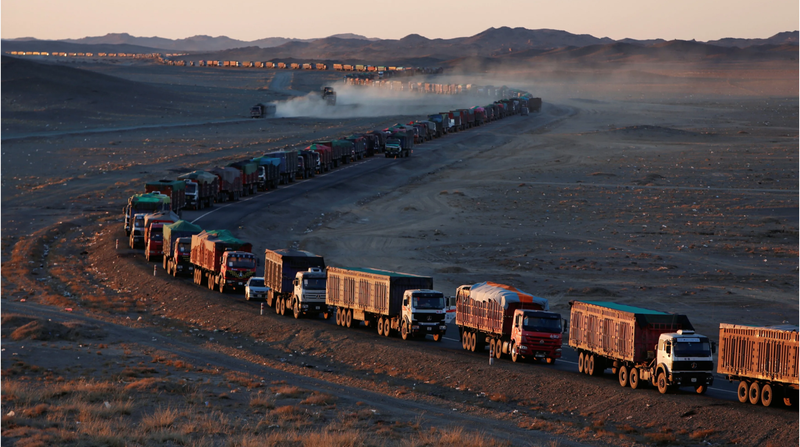 Initial modelling indicates that a SSLNG in this location in Mongolia should be highly profitable.

Possible funding sources could include the various international financing institutions (IFIs) that are present in the country and with whom Elixir has an ongoing relationship.

The Tavan Tolgoi coal mine and the Oyu Tolgoi copper mine are both located with Elixir’s PSC area with connecting roads leading to China.

Those projects can be seen on the map of the South Gobi below. The borders of Elixir’s PSC is marked within the Umnugovi province (yellow). 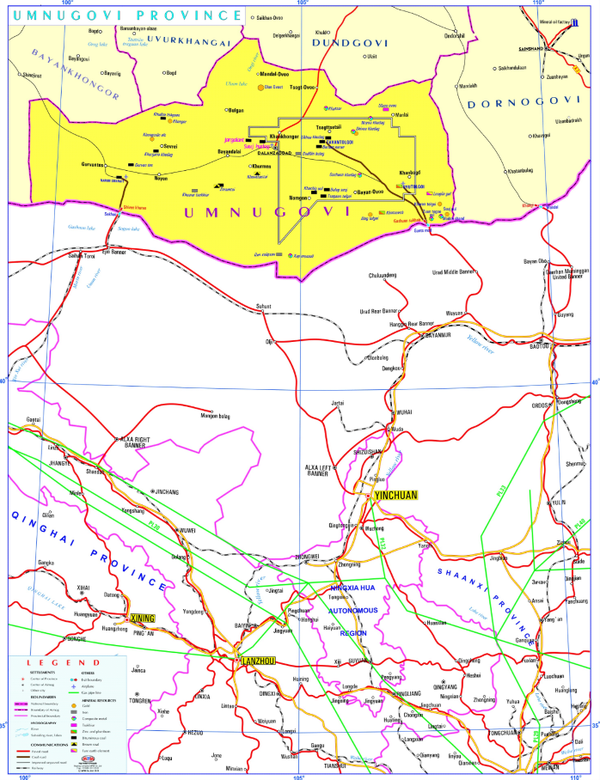 Plenty of newsflow ahead

After finishing the 2019 drilling season on a high back in February, and with the Nomgon-1 discovery results in, Elixir is now back exploring at its gigantic CBM PSC in the South Gobi region.

With cash in the bank following its heavily oversubscribed capital raising, we look ahead to the upcoming second year exploration campaign. Still due to commence in July, all national regulatory approvals have been received and the drilling contractor has been signed on.

Before long work crews will be mobilised ahead of the upcoming spud of the first well of the drilling season.

Unlike many of its peers that have been impacted by the global COVID-19 pandemic, Elixir can still undertake its exploration work as planned. Its local team and contractors in Mongolia have the skills, equipment and experience to safely and efficiently prosecute an exploration campaign even with the current travel restrictions.

That means plenty of newsflow ahead and Elixir continues to attract attention from both the market and potential partners.

Our decision to recently double our shareholding in Elixir reflects the confidence we have in the company and its management team heading into this latest exploration period as it seeks to book a contingent resource later this year and attract farm-in partners down the track.