Our long term exploration investment Galileo Mining (ASX:GAL) has fired up its 2022 drilling program across multiple projects, with the goal of delivering palladium and nickel discoveries.

With a perfect storm of multiple drilling campaigns and associated results flowing over the coming months, it all translates to more chances of GAL making a major discovery.

GAL is drilling for nickel right now in the Fraser Range, but today’s news was all about its palladium exploration efforts.

Today GAL put out some impressive palladium AC drill hits on its project in Norseman, WA, and is gearing up for RC drilling in the coming weeks targeting a palladium discovery.

Given the current macro environment, we think it's a good time for GAL to be very active in exploring for palladium.

Prior to the Russia-Ukraine war, Russia accounted for ~40% of global palladium supply. Right now, palladium is trading at 6 month highs of ~US$2,500 per ounce.

With the world essentially banning any commercial dealings with Russia, we will be waiting to see how this impacts the palladium price.

Today GAL confirmed widespread presence of palladium and nickel across its Norseman project, with peak results received right on top of a cluster of EM conductors.

The next step for GAL is to do some follow up RC drilling on these targets, which is expected to happen in April - pending drill rig availability.

In the meantime, while it waits for the remainder of the Norseman AC assays and plans its RC drilling, GAL is moving on to its other WA nickel project in the Fraser Range.

The Fraser Range is home to the $1.8 billion Nova-Bollinger nickel discovery and this project is our primary reason for holding GAL in 2022.

Earlier in the week, GAL announced that a 1,000m RC drilling program had commenced over its Fraser Range nickel targets.

This program’s aim is to test three EM conductors and two targets identified during the last round of air core drilling at the project.

Regular readers would also be familiar with the currently unfolding nickel story as well - it’s now trading at 10-year highs at US$24,800/tonne. Nickel is another commodity that Russia (up to now) had been supplying to the world...

GAL is taking its “shots on goal” at the right time for what we hope is a large-scale nickel discovery in the Fraser Range.

While palladium is used to reduce emissions from traditional petrol cars, nickel is now a battery metal, critical to the rollout of EVs around the world.

We believe both metals are crucial to the continued growth of the green economy.

The key takeaway from today is that GAL is making significant progress on its key objectives which we lay out in our GAL Investment Memo: 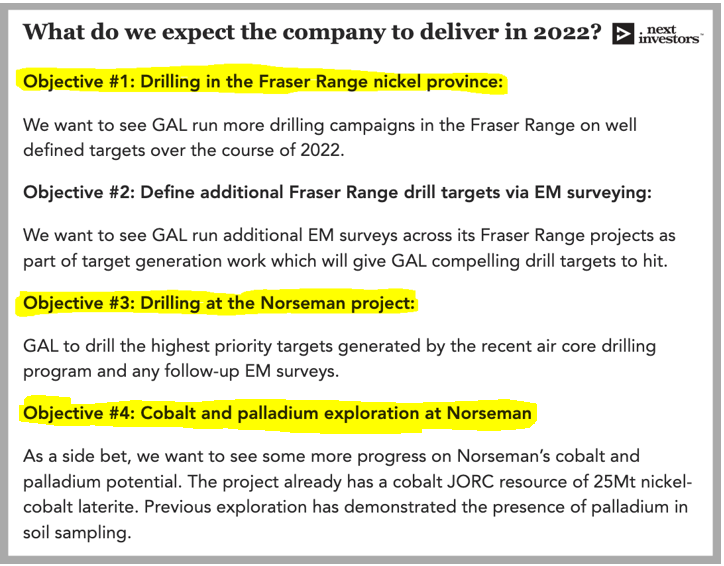 More on the air core drill results from the Norseman Project:

The first batch of results from today's announcement was immediately on top of the southern group of EM conductors which we covered extensively in our last note on GAL which you can view here.

Encouraging early signs but it's important to remember that this was all done as part of an aircore drilling program which was to throw up high priority targets that GAL could then go and test with deeper drilling.

Aircore rigs are not powerful enough to drill deep so are almost always used as reconnaissance as part of target generation works. AC drilling is also cheaper than RC drilling so it’s a good idea to do first. 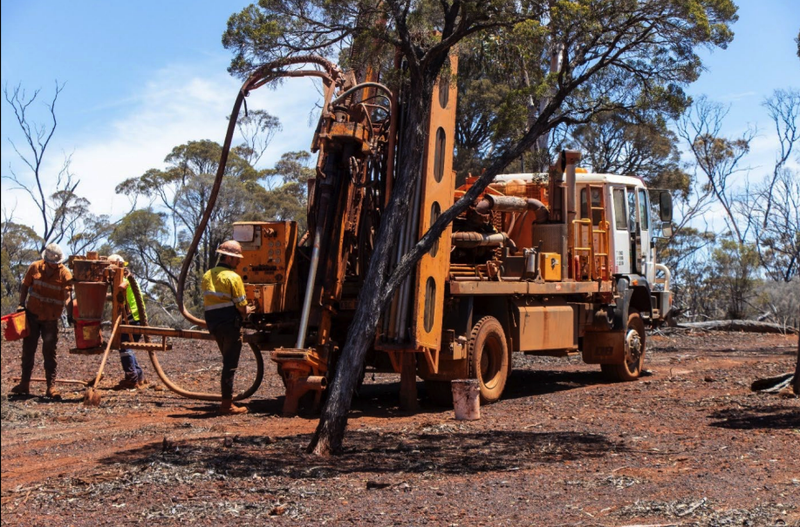 The results from today are a good sneak peek into the presence of nickel, cobalt and palladium across the entire magnetic structure over its Norseman project.

You can see this magnetic structure in red in the image below. What we see emerging is lots of targets warranting follow up work: 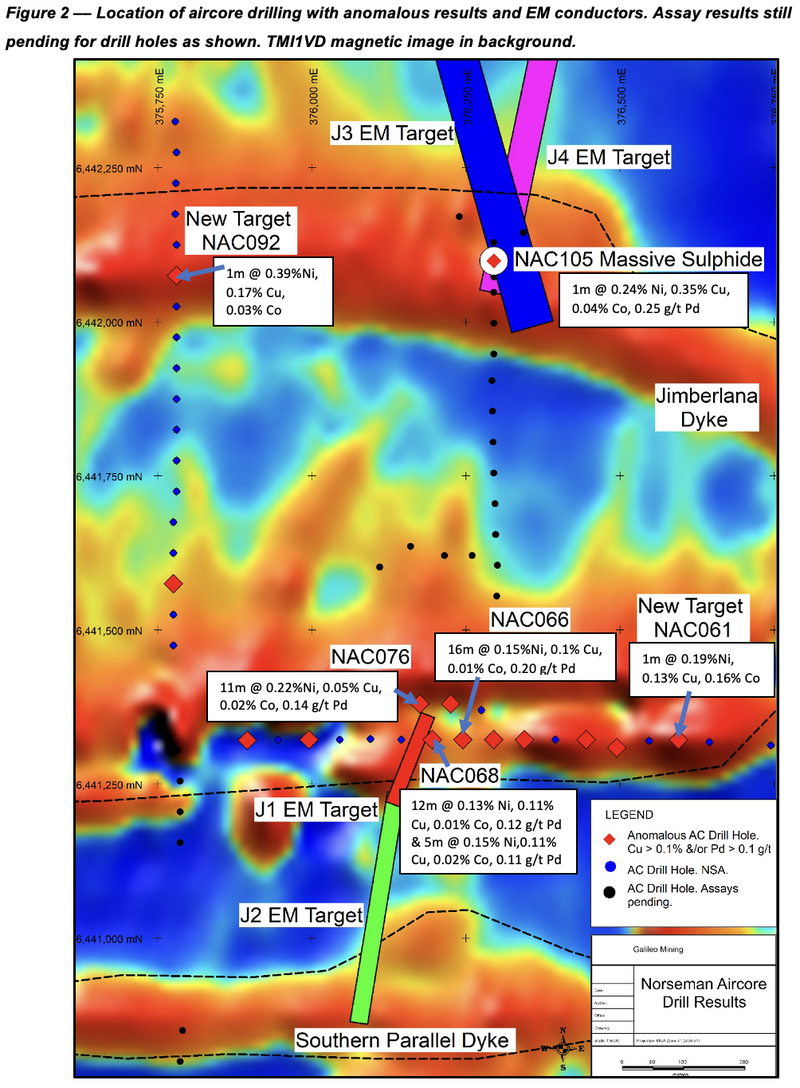 A magnetic structure on its own doesn’t mean that much, it would be the same as picking up rock chip samples, an indication something is there but nothing more.

The key takeaway from the air core drilling program for us goes back to when GAL’s air core rig chipped the top of a massive sulphide structure and couldn't penetrate it.

After returning 1m @ 0.24% nickel, 0.04% cobalt and 0.25g/t Palladium from that massive sulphide chip, GAL ran downhole EM surveys and found that the intercept was made right on top of two highly conductive EM targets (J3 and J4) in the image above.

None of this would have been found if the air core drilling wasn't done.

So with the ultimate objective being to find targets that are worth following up with deeper drilling, GAL definitely managed to get what it wanted out of this round of air core drilling.

We did a deep dive on these EM conductors in our last note on GAL which is worth reading to get a better understanding of what the potential is at GAL’s Norseman project. 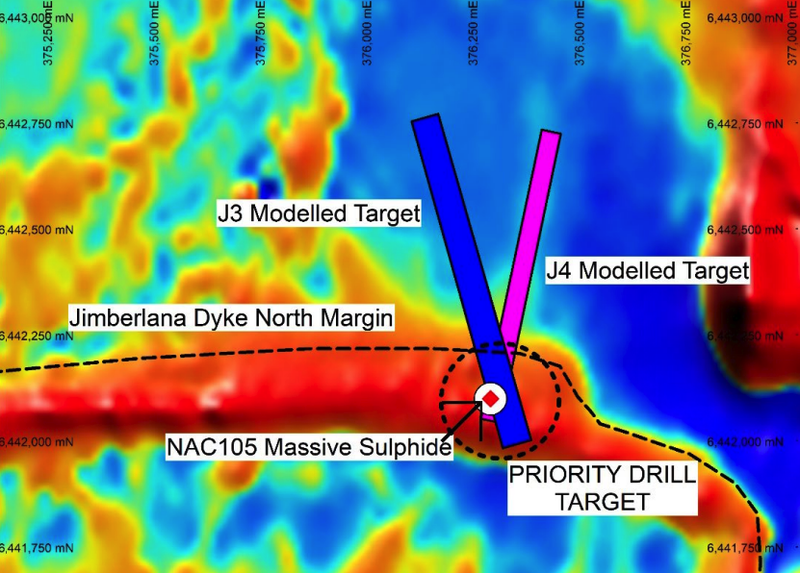 What’s next for the Norseman Project?

More assays results from the 8,700m aircore drilling program at its Norseman Project 🔄

Today’s results are only the first batch of assays from the 8,700m air core drilling program.

We expect the remaining results to come in over the next few weeks but think GAL have plenty to work with already so any high grade intercepts will just be a massive bonus.

More drilling across the Norseman project 🔄

In the middle of last year, GAL did some RC drilling beneath its already defined Nickel Cobalt resource and intersected a sulphide zone with grades increasing along strike to the east.

GAL already has permits approved for a ~1,000m RC drilling program and expects it to commence in April 2022, subject to drill rig availability.

Drilling of the downhole EM (Jimberlana) conductors at the Norseman project 🔄

The news we are most looking forward to at Norseman will be the commencement of drilling at the EM conductors that were found after the downhole EM surveys were run.

GAL in today’s announcement confirmed that drilling at those EM conductors would be done as soon as heritage surveys and statutory approvals were granted.

What about the Fraser Range drilling?

Earlier in the week GAL highlighted that it would be testing a total of 5 targets with the 1,000m RC drilling program.

The first of these would be the two areas highlighted in the last round of shallow aircore drilling that GAL did in 2018.

These target areas came about after GAL completed detailed aeromagnetic surveys which were in late 2018, then tested with 51 aircore drill holes to an average depth of ~41m - a really shallow depth when drilling for a nickel sulphide discovery.

The purpose of the drilling program was not so much to make a discovery but just a first pass shot at testing the magnetic structures that had been mapped and aim for deeper higher priority targets areas that could have warranted follow up drilling.

At the time GAL mentioned that no significant sulphides had been intercepted but that the necessary features of a nickel deposit in the Fraser Range “Mafic-Ultramafic lithologies” had been identified.

With the best assay result from the program returning 36 metres @ 0.2% nickel from 18m including a higher grade section of 3 metres @ 0.56 % nickel from 24m, GAL mentioned that the presence of nickel was a positive sign the rock structures had the potential to host a nickel-copper-cobalt sulphide deposit. 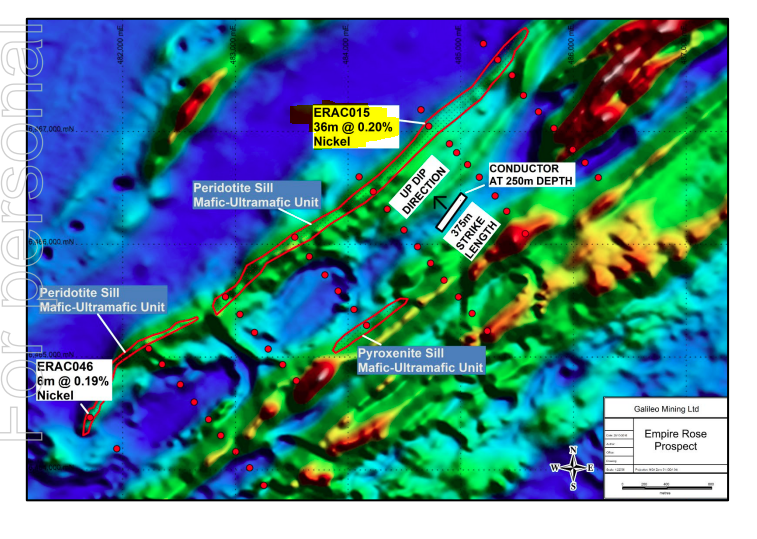 As we’ve said above, with any shallow aircore drilling program, the aim is not to make a discovery, it is to try and work out where the next round of drilling should be focussed. GAL is now taking that next step to try and see if there are any indications of sulphide mineralisation at depth.

The second batch of targets is the three EM conductors that sit along strike this previously tested area. 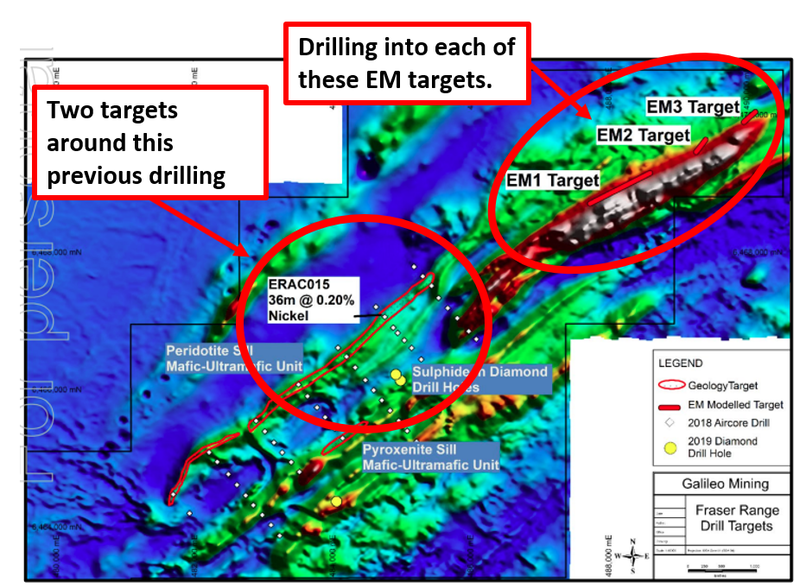 GAL after overlaying EM data and the magnetic structures in the region have managed to put together the three targets in the image above, EM1, EM2, & EM3.

These three new targets are actually in an area where GAL has previously diamond drilled other EM targets in 2019 and hit sulphides that were more anomalous for gold and less so for nickel.

When drilling into these EM anomalies, companies are essentially trying to figure out whether or not there is economic sulphide mineralisation, non-economic sulphides, graphite, or other sulphide hosted minerals.

In GAL’s case the target has always been a large scale nickel discovery.

The largest of the three is EM1 which has an almost 1km length and 600m height. The positive for GAL is that the EM conductors are at the deepest ~150m at depth, meaning this RC rig will definitely be able to drill down into the conductors.

With this round of drilling GAL will be drilling one hole into all three targets and we think that if massive or semi-massive sulphides are intersected and the assays return economic nickel grades, GAL will immediately commission follow up drilling.

In today’s announcement, GAL has mentioned that the results from the drilling program are more likely to be received in April/May, but in the meantime we will be watching to see if GAL intersects any visible sulphides.

With the commencement of the 1,000m of drilling this week, we anticipate results from this program to start coming back in ~April/May.

In the meantime we will be watching to see if GAL makes any visible massive or semi-massive sulphide intercepts.

Remembering that the previous nickel discoveries in this region were all EM conductors that were drilled, initially showing visible sulphides and then the assays revealing high grade nickel.

Our “Investment Memo” is a short, high-level summary of why we continue to hold GAL and what we expect the company to deliver in 2022.