Today our EU battery metals investment Kuniko (ASX:KNI) announced that it has received back positive early data from its geophysics program - unveiling multiple electro magnetic conductors across its projects.

KNI spun out from Vulcan Energy (Vulcan retains 23.34% of KNI) and is exploring for key metals for electric vehicles and the batteries that power them: Cobalt, Nickel and Copper.

KNI has a mandate to maintain Net Zero carbon footprint throughout exploration, development and production, in addition to being local in Europe - zero carbon and local supply are in high demand by European automakers switching to electric vehicles.

KNI’s copper, nickel and cobalt projects were historically producing mines, and have not had modern exploration techniques applied to them, meaning they could turn up new deposits if they look in the right places.

Two months ago we wrote that KNI’s modern EM survey techniques could return literally ANYTHING... including multiple EM conductor targets OR a big fat NOTHING. This is the nature of early stage metals exploration - any investment is risky, even when a company is working with historically producing mines.

In September when KNI commenced their geophysics surveys we wrote we were hoping they would return multiple EM conductors.

Today KNI gave the market an early look into the progress of their geophysics work - and as we were hoping, KNI has delivered some very interesting geophysics and EM survey results, specifically:

Here is our quick visual of the key anomalies and conductors returned by the KNI’s geophysics surveys that we’ll discuss today, we have circled them in green: 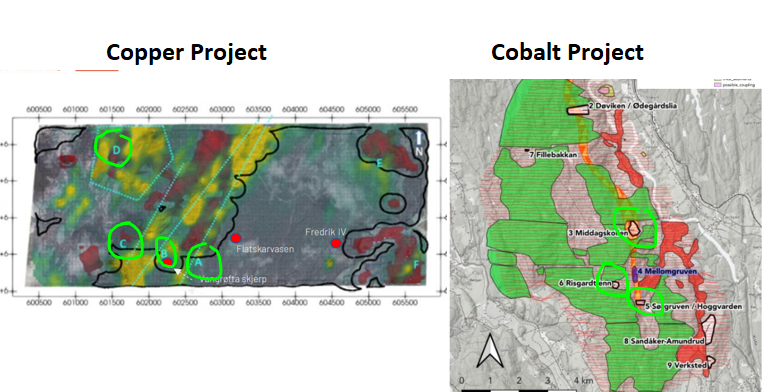 Today we will provide our commentary and our “armchair geologist” interpretation of the conductor data just released by KNI.

It's important to note that today's announcement gets KNI one step closer to identifying drilling targets. KNI’s geologists and technical team are going to go over the data shared with the market today, and will determine which of the multiple EM anomalies will be the most interesting to drill first, second, third etc.

By “most interesting ” we mean which target could have the most likely chance of delivering mineralisation when drilled, obviously that’s the one we want to drill first - the soil sample analysis we are still waiting on from the lab will help inform this decision.

Here is what we said we wanted to see two months ago from KNI from its geophysical survey work: 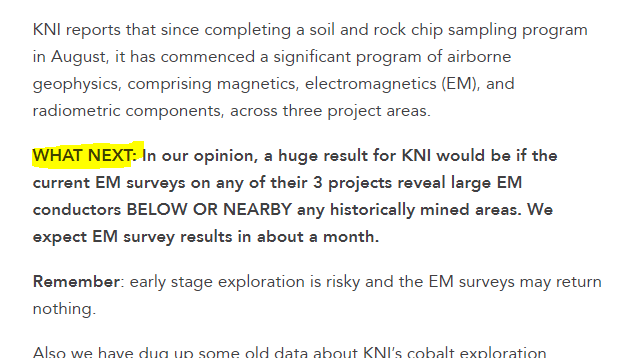 So we consider today’s news to be a very good result - KNI has returned EM conductors and anomalies in both expected areas AND a couple of new conductors in areas away from existing projects.

Regular readers will know that geophysics announcements can sometimes return little or no potential targets - some of our other exploration companies have not returned any interesting EM conductor data to warrant further investigation, so for KNI to have multiple EM conductors across several different projects is a great result.

Today KNI has given an early preview of the geophysics progress and the raw data to be further interpreted.

ALSO: KNI says it is still waiting for the geochemical results from the lab - this is important info from the soil samples taken from they surface above today’s conductors that will tell us if there are traces of the metals that we are looking for - a good indicator that the geophysical anomalies could also contain that metal. These results are due this month.

The next thing we want to see from KNI is selection of the highest potential drill targets based on analysis of the above conductors/anomalies.

Here is our mini-dive into each set of data for the cobalt project and copper projects:

What was announced today and why it matters 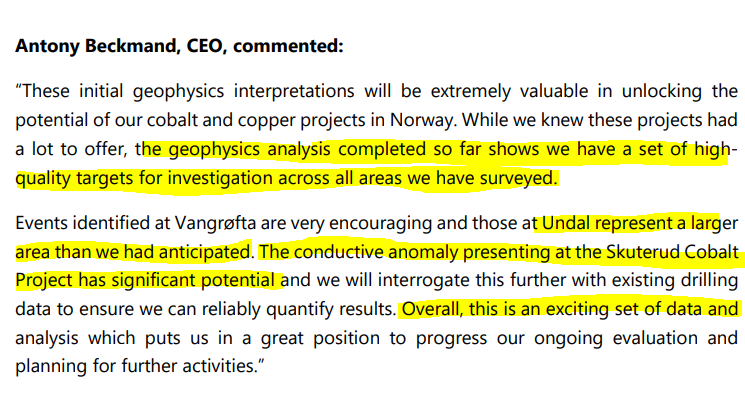 KNI’s Skuterud tenements are in a part of Norway called the Modum Vest Ore Province which was known for its historically important Co, Cu and Ni production — this mining district was previously the largest cobalt mining area in the world. Mining occurred from 1773 to 1898, with total estimated production of 1 million tonnes with 0.1–0.3 % Co, up to 2.0 % Cu and Au up to several parts per million locally. 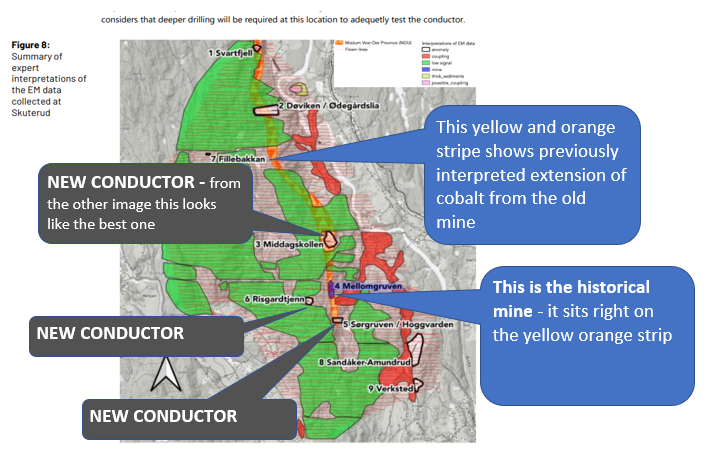 This is the key element of today’s announcement:

To best understand what KNI is working with, and why they need to drill these new conductors starting with Middagskollen (conductor #3) - check out this 3D map: 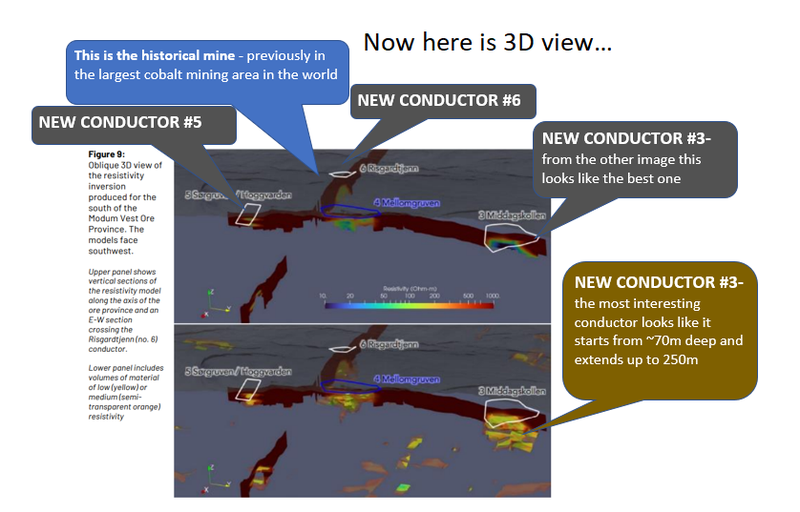 So the paragraph we highlighted above, combined with the commentary on the maps we provided, outlines what we think is some good potential for KNI’s Skuterud project.

It’s also important to know that the previous project owner, Berkut Minerals didn’t have access to the technology that KNI has, and as a result KNI can build a better model of the Modum Vest Ore Province. Here is where we cover more about KNI’s cobalt project and the historical data.

Skuterud - Here’s what to expect next...

KNI indicated that to really wrap their head around the Middagskollen conductor (number #3), the big colourful blob on the right figure 9, deeper drilling is required.

We think these initial drill results could really unlock the potential at Skuterud and Middagskollen is one of the primary places they intend to go looking for more cobalt.

From our observations, there's clearly something significant at these conductors, especially Middagskollen, however KNI needs to do more drilling in key areas in order to prove something up.

KNI CEO Antony Beckmand said in the announcement that the ‘events’ or anomalies require further analysis as KNI triangulates all the data and results they are working with and that these targets are high quality.

EM surveys and geophysics will often return no conductors or anomalies, after today’s results we feel more confident in Skuterud and it is shaping up nicely.

The project area has a long history of production dating back to the 1600’s. Specifically in the Undal project area where historical production was completed for 289kt at average mined grades of 1.15% Copper & 1.86% Zinc.

The EM Surveys have now been completed over the Undal & Vangrøfta projects where sampling by KNI at Vangrøfta yielded up to 16.75% Copper, 3.33g/t gold and anomalous concentrations of cobalt.

Encouragingly today’s EM data shows us that surrounding Vangrøfta are large areas of conductivity highlighted in Red & Yellow. The better the conductivity the more likely KNI are to hit an ore-body. This is exactly what we wanted to see and indicates to us that KNI are looking in the right area. 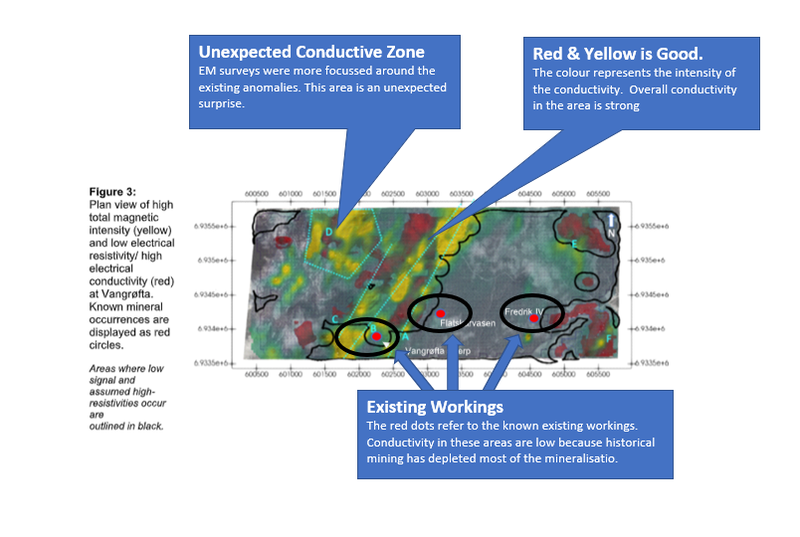 What to expect next at Vangrøfta?

The last piece of the puzzle is to overlay the geochemical results with all of this existing data. Going into this part of the exploration program we will be looking out for confirmation in the geochemical results that the zones highlighted in light blue as A/B/C/D are Priority areas & that the highest priority drill targets are located in these zones.

Importantly the Undal project also returned strong conductors which correlated well with the stratigraphy mapping in the area. This is particularly encouraging to us, as mineralisation in this area is generally stratigraphically hosted. “Stratigraphic mapping” studies the different layers of the host-rock & the mineralisation links between them. This correlation basically confirms to KNI what they hoped their geological models were telling them.

The strongest conductor – Conductor A – occurs in the northernmost part of the survey area.

Geochemical results are due by the end of November and will need to be overlaid with the existing EM Data to better make sense of the conductivity.

Ideally we want to see Geochemical results indicating that Conductor A is a priority drill target and will be included in the upcoming drilling programme.

So we have the #5, #6 and #3 conductors/anomalies for cobalt at Skuterud. #3 being the best looking one in our opinion so far.

And A, B, C, D conductors / anomalies for copper.

KNI says the geochemical work is still in the lab, and once this comes back, it will help inform the most prospective places to drill first. These results are due in November.

Basically all the colourful blobs returned in the images above are just one piece of the puzzle, the geochemical testing will confirm if there is presence of the metal KNI is looking for in the surface soil, which will help choose which colourful blobs are the most likely to deliver a result when drilled

WHAT NEXT: we want to see the geochemical results (due this month), probably combined with KNI’s most high priority drill targets announced (including an explanation of why they were chosen) AND a time frame for when the first drilling will happen.

With $7.17 million in cash as at 30 September 2021, KNI has a decent war chest to get the ball rolling here. And today’s conductors are just the beginning, we think.

In line with our general investment strategy for early stage explorers, we have sold 8.04% of our KNI position, and we are moving towards achieving free carry prior to the initial drilling results, which we expect to complete in the first half of 2022.

Disclosure: The authors of this article and owners of Next Investors, S3 Consortium Pty Ltd, and associated entities (including staff), own 2,881,667 KNI shares.