Amid geopolitical tensions, energy security is high on the USA’s agenda.

In particular, the US is prioritising nuclear power and securing domestic uranium supply, just look at the headlines:

With these macro tailwinds blowing in its favour, our US-based uranium exploration Investment GTI Energy (ASX:GTR) is kicking off its 2022 exploration program.

Yesterday, GTR completed the planning process for its upcoming 100,000 foot (~30,000 metre) drilling program across its uranium projects in Wyoming - drilling should start in the coming weeks and be completed by Christmas.

Wyoming is the uranium capital of the USA, where over 80% of domestic supply is produced.

Not only does the state produce the bulk of America’s supply, but it is home to a US$4 billion next-generation nuclear power plant being developed by Bill Gates and Warren Buffet.

GTR plans to drill ~130 holes across five different targets, following up on drilling done earlier in the year when the company announced a maiden discovery.

The ultimate aim of the drilling program is to either put out a maiden uranium resource estimate or, at the very least, an achievable exploration target to base future exploration programs.

We will measure the success of GTR’s drilling program against the following expectations:

Yesterday’s announcement comes after GTR completed the acquisition of additional ground in Wyoming, increasing its landholding from 22,000 acres to 35,000 acres — a 59% increase in size. Importantly, all of this newly acquired ground surrounds Rio Tinto’s projects.

GTR has a $6.9M cash balance after completing a $5M placement earlier in the year at 2.1c per share and has spun-off its gold assets. It is now a fully focused pure play uranium exposure on the cusp of a big drilling program chasing a US uranium discovery.

With the uranium price trading just off an 11-year high and the US government scrambling to secure additional domestic supply, we think GTR is drilling at the perfect time.

Why do GTR’s projects being in the US matter?

The US has over 91.5GW in installed nuclear capacity from 93 reactors across 30 states, making it the world’s largest producer of nuclear power.

Despite this, US domestic uranium production has been declining.

This is slowly looking like it will change though, with the US government quickly realising that nuclear power offers a solution in transitioning to low emission power generation and to the domestic energy crisis.

In April, the US Department Of Energy was reported to be preparing to launch a US$6 billion program to keep uneconomic nuclear plants in service.

More recently, the Biden government came out in support of the industry, pushing for lawmakers to support a US$4.3 billion plan to buy enriched uranium from domestic producers to wean the US off Russian imports.

At present, Russia is a significant supplier of uranium and enrichment services to US utilities, with up to 20% of reactor requirements met by uranium enriched in Russia.

We think this means that the US will move to secure domestic uranium supply as it is now strategically important.

These strengthening macro tailwinds are a large part of the reason we hold GTR in our Portfolio. 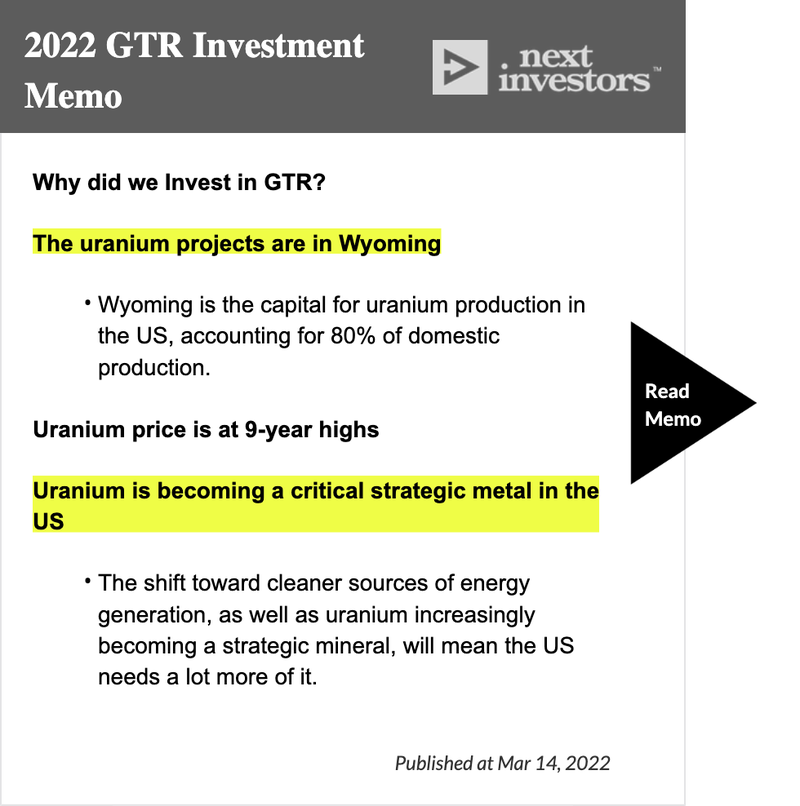 More on the drilling program

With the drilling program fully planned, let's look at the areas GTR will target.

First, is the “Thor” project:

This is just a continuation of the drilling works GTR did earlier in the year.

That last round of drilling discovered a ~3km mineralised zone, which GTR will be looking for extensions to in the “ north-eastern section of the project”. 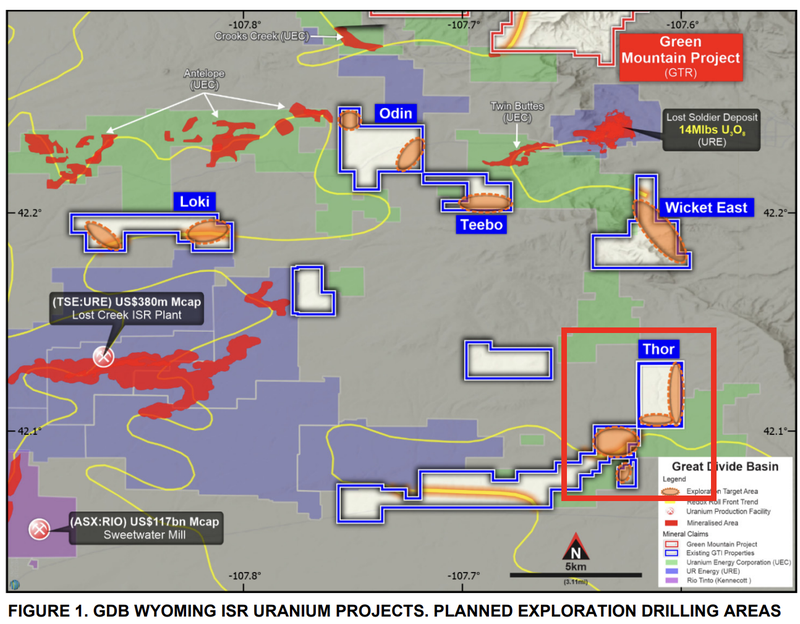 To see how GTR’s first drilling program went over this part of its project area, check out our last GTR note: Drilling results are in as Uranium prices keep edging upwards

Second, GTR will be targeting its Wicket East Project.

This sits right on the southern boundary of Ur-Energy’s Lost Soldier deposit, which hosts a 14Mlb uranium resource.

Similar to the way the “Thor” drilling was planned, GTR is using historical drilling information to target its drilling.

The drilling will be predominantly focused on testing for extensions to Ur-Energy’s deposit, the thinking being that the ~5km mineralised zone (yellow line in the image below) extends into GTR’s ground. 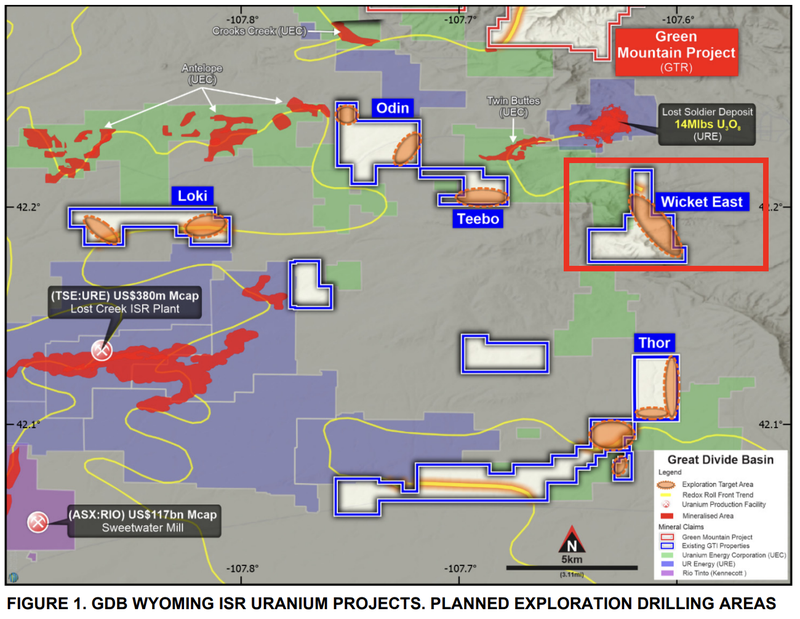 The rest of the drilling program will be focused on the Odin, Loki and Teebo projects.

While its Loki project is wedged between UEC’s Antelope and north of Ur-Energy’s Lost Creek Project.

Over the three project areas, GTR has ~8km of previously intercepted uranium mineralisation to follow up.

All of this information comes from the same historic drilling data that the company used to plan its drilling program earlier in the year. 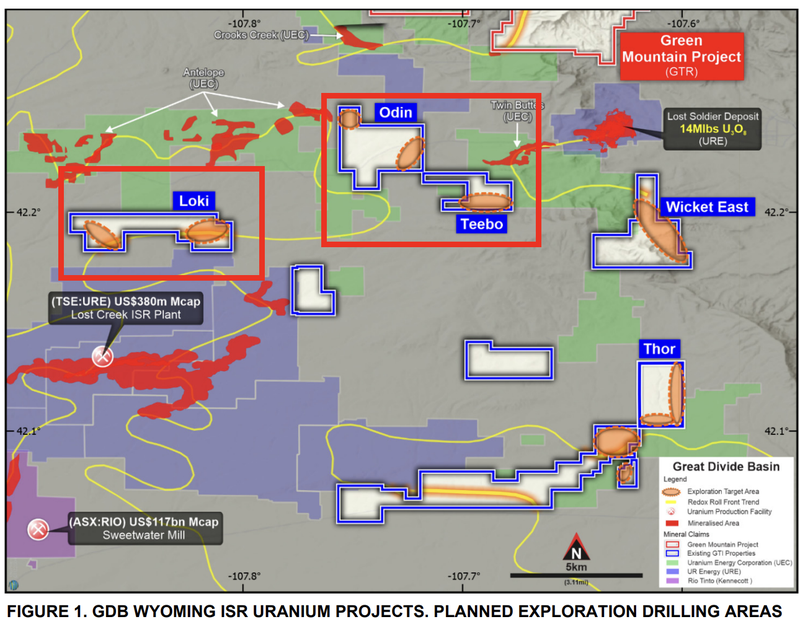 With the planned drilling program now on the verge of being fully permitted, GTR just has to get its drill rigs on the ground and start exploration work.

Managing director Bruce Lane commented on yesterday’s announcement saying that, “We are confident that we can successfully execute the drilling this year which will set GTI up to produce a uranium resource report in 2023. We look forward to providing updates in the coming weeks as the program progresses”.

This should mean we get a better understanding of when the drilling program will start over the coming weeks.

Below we have set our expectations for what we want to see from the company’s drilling results.

As this round of drilling follows up on an exploration program completed earlier in the year, we will be tracking the drilling results against the expectations we set in our 2022 GTR Investment Memo.

Our expectations are primarily based on the intercepts received at the nearby Lost Creek Project, using the general economic cut-off criteria for ISR uranium projects in this part of Wyoming.

As a result, our focus for the drilling results will be on the "GT Measure" (grade x thickness), where we want to see:

Again, we will base the success of GTR’s drilling program on the following expectations:

In mid June, GTR acquired an additional ~13,800 acres in ground next to its existing uranium projects in Wyoming.

This acquisition, of the “Green Mountain Project”, brought GTR’s landholding to a total of ~35,000 acres across a region that is considered the uranium capital of the US.

Interestingly, the newly acquired grounds all sit against a border shared with Rio Tinto and in close proximity to Canadian-listed Energy Fuel’s (capped at CAD$1.1B) 30Mlb Sheep Mountain deposit. 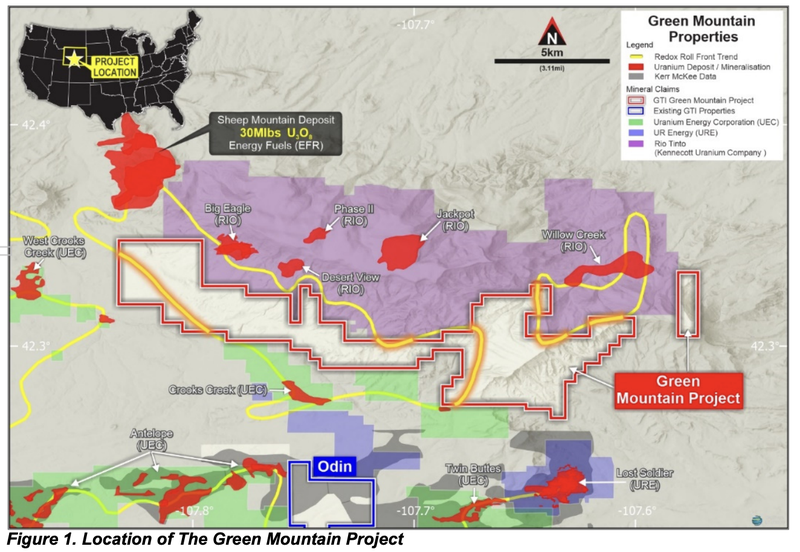 The world is in the midst of an energy crisis while trying to transition away from fossil fuels into cleaner, lower emission energy sources.

We think the case for baseload power generation through nuclear power is getting stronger by the day.

As a result, we see the opportunity in the uranium space as one of the few “unloved” commodity plays, where the macro thematic continues to strengthen.

Here are some developments in the uranium space that we think impact both the uranium macro theme and GTR directly.

Below is our 2022 Investment Memo for GTR, where you can find a short, high level summary of our reasons for investing.