Disclosure: The authors of this article and owners of Next Investors, S3 Consortium Pty Ltd, and associated entities, own 20,232,084 GTR shares and 746,615 GTR options at the time of publication. S3 Consortium Pty Ltd has been engaged by GTR to share our commentary on the progress of our investment in GTR over time.

Our investment GTi Resources (ASX:GTR) is chasing uranium across its two projects in the USA.

Today GTR confirmed it has launched its maiden drilling programme in Wyoming - the uranium capital of America where over 80% of domestic supply is produced.

GTR is going to be peppering circa 100 holes in a ~ 15,000m campaign, to confirm the grade and tenor of uranium mineralisation that was previously identified in the 1980s.

With uranium prices at near 10-year highs, we think it is a pretty good time to be looking for uranium.

Driven by growing political support for nuclear as a viable option to reduce carbon emissions, GTR is aiming to find the fuel (uranium) that makes the US nuclear industry tick.

The US has over 91.5GW in installed nuclear capacity from 93 reactors across 30 states making it the world’s largest producer of nuclear power.

And yet the USA’s domestic production has ground to a halt, in part due to foreign competition and domestic political inertia.

However, the US is quickly realising that securing domestic supply is a strategic priority.

Which is why we like that GTR is exploring for uranium in the US right now.

Earlier in the year, GTR completed the acquisition of a set of uranium projects in the USA, one of which is in Wyoming’s Great Divide Basin.

GTR acquired its Wyoming uranium assets well before interest in uranium companies started to ramp up, notably with Sprott’s Physical Uranium Trust purchasing over $1.8B in physical uranium.

Combine Sprott’s move with US political momentum behind shoring up the domestic uranium supply chain, and GTR has what we believe is a fairly compelling macro theme behind it.

Aside from our investment GTR, there are pretty big household names doing some pretty interesting things in the uranium and nuclear space in Wyoming - it's the same state that Bill Gates and Warren Buffets’ Terra Power is aiming to build its first nuclear reactor:

Now, with the uranium price at a level not seen for nearly 10 years, we believe GTR is in the right place at the right time to potentially identify a new uranium discovery.

The current drill program is designed on the historical data available to GTR based on drilling works done by a previous owner (Kerr McGee).

The ultimate aim for GTR’s current drill program is to accurately identify the depth, thickness, grade and width of mineralisation over the project area & to either:

What do we want to see from drilling?

GTR is drilling in an area where they expect to find uranium mineralisation. As a result the current drilling program is more so focussed on putting together a database of drill results that confirms the uranium grade + tenor (and ultimately resource size).

In today’s announcement, GTR set some expectations for the drilling program mostly based around their neighbour UR-Energy’s Lost Creek project.

GTR is hoping to return intercepts that mirror those received at the Lost Creek Project which are considered to be above the general economic cut-off criteria for the type of Sandstone hosted ISR uranium projects in this part of Wyoming.

The Lost Creek ISR uranium deposit has a 13mlbs (Measured/Indicated resource), at an average grade of 0.048% Uranium with an average Grade Thickness (GT) of 0.2.

The focus for GTR’s drilling program won't only be the grades but a combination of the sandstone thickness and the grade which will make up the “Grade Thickness” (GT) measure.

So, GT is a measure of the grade x thickness:

In-line with the expectations GTR have set, we will want to see the following:

We think that a successful outcome for GTR would be if the company can put out an economic maiden resource estimate.

This could put GTR on the map for any potential consolidation of uranium assets in the region.

GTR has now started drilling at the first of three priority target areas at its ISR uranium project in Wyoming.

The first target area being drilled now is the “Thor” Project, which as we mentioned above, sits ~5-30km away from both UR-Energy’s Lost-Creek ISR uranium facility & Rio Tinto’s Kennecott Sweetwater uranium deposits and mill.

The map below shows just how close GTR is to its uranium neighbours in Wyoming: 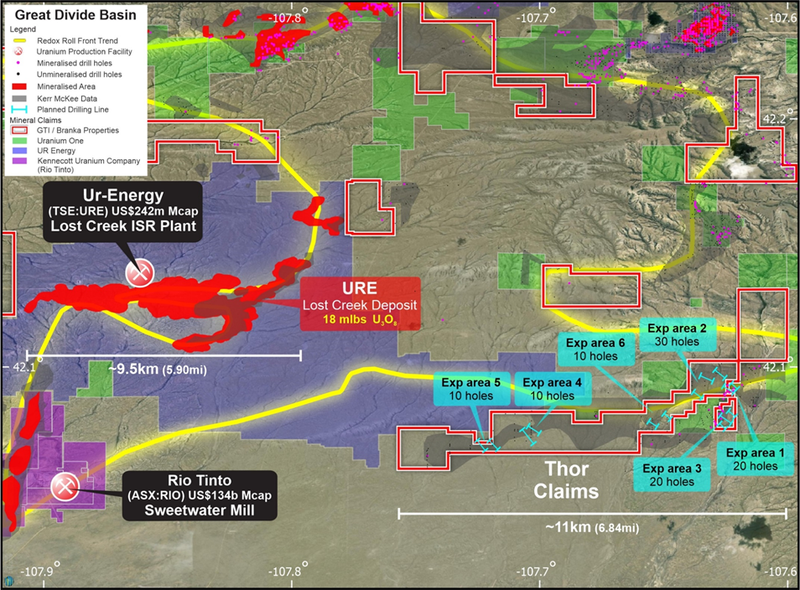 GTR’s Thor project sits over a ~11km strike zone which in the 1970’s & 1980’s had been drilled extensively by Kerr McGee Uranium, a US based major at the time - which was later acquired by Anadarko petroleum (Now Occidental Petroleum) for US$19.1BN in 2006.

That $US19BN transaction was at a time when the previous uranium bull market was near its peak - in fact it kept going longer and stronger: 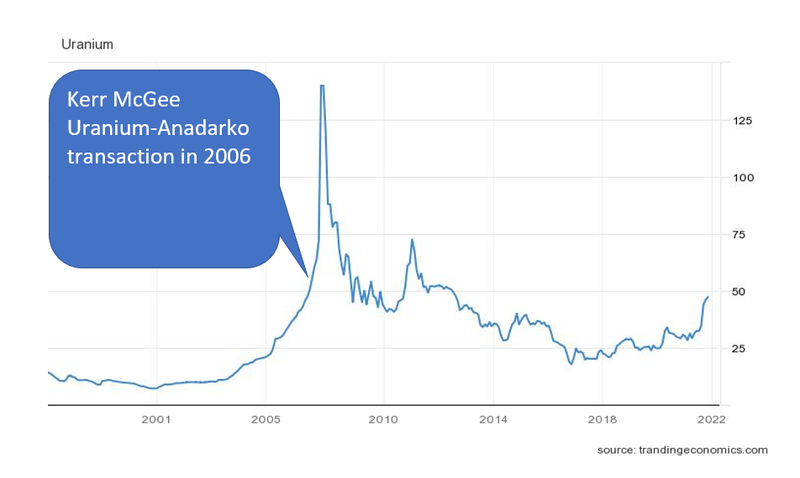 This gives a sense for the potential that we think could be under the surface for GTR, should things go well. Of course there is a fair bit of luck at play here in timing exploration success with a broader commodity bull market, and success is no guarantee.

Another aspect to consider is how GTR plans to extract the uranium from whatever it finds.

In the 1970-80’s ISR (In-Situ recovery) mining methods were not as common a mining practice for the recovery of uranium as they are now, and so most of the historical exploration was focused on shallower mineralisation with open-cut mining potential, with no emphasis being placed on the ISR potential for a project.

To learn more about In Situ Recovery mining methods for uranium - read our detailed breakdown here.

Interestingly the mineralisation encountered at GTR’s project decades ago was all located between 102-180m from surface - which is the depths GTR will be targeting.

The bulk of the drilling data was held confidentially by Kerr McGee however GTR do have access to the locations & maps detailing where the drilling occurred.

GTR’s 15,000m drilling program that began today is taking place over ~100 holes and is designed mostly to test the areas where there is known mineralisation based on the historical data available.

Essentially GTR are aiming for some quick exploration wins here - drill testing areas where they expect to find uranium mineralisation.

The drilling program's key objective is to accurately identify the depth, thickness, grade and width of mineralisation across it’s Wyoming project.

After confirming the grade & tenor we are hoping GTR can put together a maiden ISR uranium resource or at the very least put together an estimate for an exploration target that GTR thinks can be reasonably achieved. 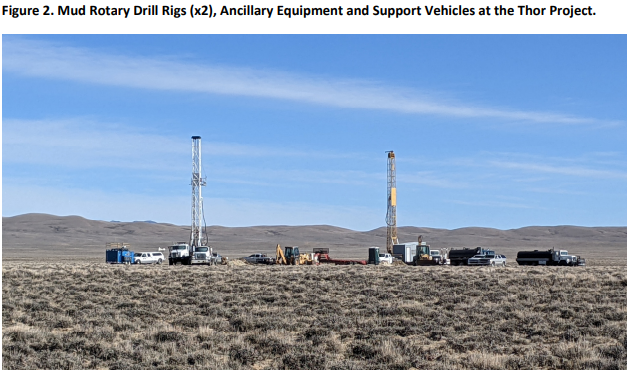 Following initial results, the final interpretation of all of the results will be available to GTR around ~July 2022.

We have cautioned in the past with respect to investing in high risk junior exploration companies like GTR. Junior explorers don't have any revenues to fall-back on & are generally volatile.

When investing in the exploration space, readers should always manage risk carefully and never invest money that you can't afford to lose.

We think the uranium macro theme is just getting started

We believe there are three aspects to the underlying macro theme behind GTR’s prospects.

Let’s unpack these one by one.

We believe nuclear is going to have to be part of the energy mix if developed countries are to meet their decarbonisation goals.

It is also incredibly low carbon compared to other energy sources.

The World Nuclear Association says that:

‘On a life-cycle basis, nuclear power emits just a few grams of CO2 equivalent per kWh of electricity produced. A median value of 12g CO2 equivalent/kWh has been estimated for nuclear, similar to wind, and lower than all types of solar.’

The common retort to pro-nuclear arguments is that it is a dangerous activity, which we believe is an unjustified position given the following data: 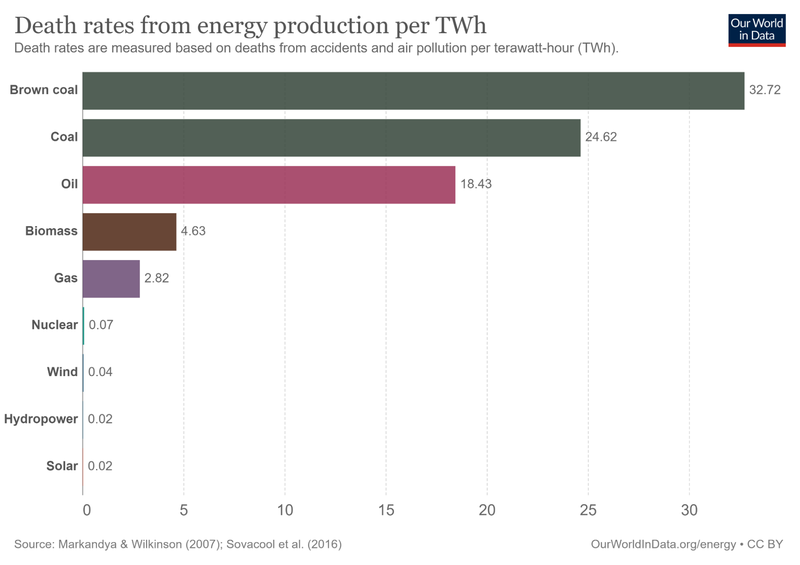 We think it’s a bit like people’s fear of flying - scary to think about but the actual statistical risk of something going wrong is incredibly small.

As you can see the US imports a big chunk of its uranium from Kazakhstan, Russia and Uzbekistan:

And importantly, has virtually no local production: 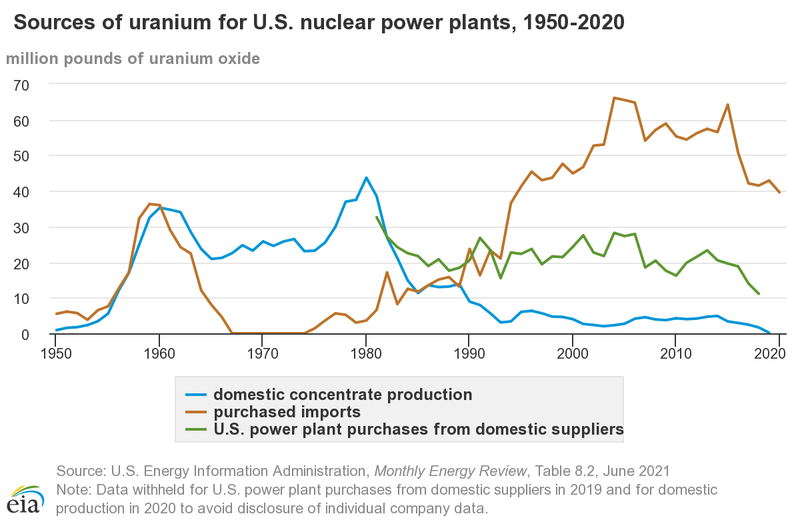 Meaning that the US is increasingly looking to up its domestic production.

This comes after the Trump administration launched a review into US uranium production in 2019.

Meanwhile, China is planning to build 150 new nuclear reactors over the next 15 years.

All of this combines with internal uranium market dynamics...

Below you can see a supply-demand divergence is expected some time in the mid-2020s:

A slump in uranium prices over the last decade and depleted resources forced a number of mine closures - notably the Ranger mine in NT, Australia.

Low prices generally lead to a lack of investment in new mines as the resources are not deemed economically viable.

Throw in the big purchases by the Sprott Physical Uranium Trust and we believe the macro pieces are in place for GTR to be successful, pending the results of the drilling announced today.

We have been invested in GTR since April 2020 when the share price was around 1.2c.

At the time the Uranium price had just moved to a high of US$35/lb before retracing back to US$27/Lb.

We remained patient throughout all of the Uranium price volatility & even added to our position at 3.3c & 1.5c. So far our patience has been rewarded with the Uranium price now trading at US$46.50/lb & GTR well above our average entry price.

Our GTR investment is a good example of having patience, where we held while waiting for a sector to fire up.

We have been holding GTR for 16 months and increased investment twice.

As with all our early stage exploration companies we invest in our strategy is to achieve free carry - with GTR we have partially achieved free carry and are going into this drilling program holding ~67% of our total investment.

🌎 Support for Domestic Uranium Produces in the US

Disclosure: The authors of this article and owners of Next Investors, S3 Consortium Pty Ltd, and associated entities, own 20,232,084 GTR shares and 746,615 GTR options at the time of publication. S3 Consortium Pty Ltd has been engaged by GTR to share our commentary on the progress of our investment in GTR over time.