Quite a few of our portfolio companies have made announcements today, so rather than choosing our favourite announcement to focus on we’ve made a quick comment on each.

Featured today are comments on:

MNB reports that it has completed a 14-tonne bulk sample to improve its fertiliser product - announcement here.

The Cabinda Project is a phosphate (fertiliser) project being developed by MNB with a 6Mt mining target and a 21 year mine life. We invested in MNB because we believe that phosphate prices will continue to be strong as global food security comes into play, while a Scoping Study indicated excellent project economics, including a project valuation (after tax NPV) of $159M to US$260M.

A 14 tonne sample MNB’s phosphate-laden rocks have just been pulled out of the ground and are going to undergo lab tests in the USA to optimise its conversion into fertiliser.

Once the optimal process is discovered on the sample, the steps can be applied in a scaled up version of the fertiliser plant that MNB is building.

MNB is seeking to develop a high-grade phosphate fertilizer with several proprietary blends and organic yield-maximising recipes that are currently being accessed.

Read more: Why we invested in MNB, our investment plan, our expected future milestones, and our past commentary.

TMR has just submitted a permit to re-establish and extend an existing adit at its site, which will make drilling faster and easier.

Basically an “adit” is a big, long shaft that extends underground alongside the veiny mineralisation. This shaft is big enough to fit a drill rig, and essentially makes it much easier to drill test holes as drilling is starting underground and closer to the mineralization.

TMR’s adit will allow drilling to continue during the Canadian winter months, because drilling in an underground shaft doesn’t require keeping the ground clear of snow, mud and ice that usually stops drilling in winter.

Here is an diagram of the lower portal and adit (underground shaft) and how it provides access to the mineralisation: 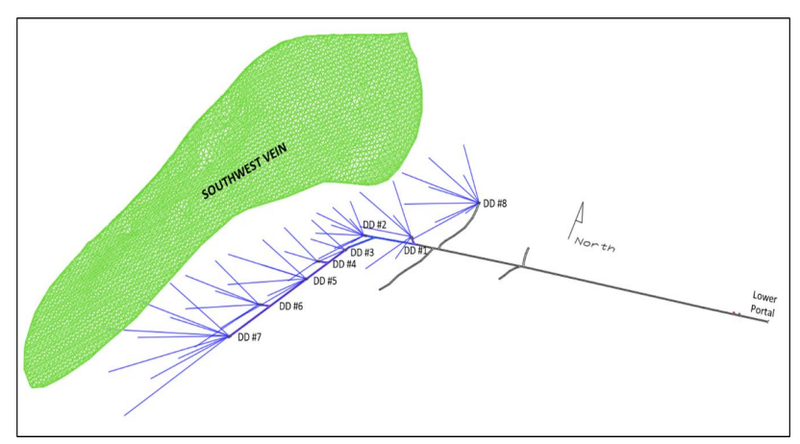 TMR has drilled a total of 19 holes on the South West Vein at Elizabeth since June. Assays have been received on the first four drill holes completed this year and assay results are pending on the remainder any day now....

Historically, the Elizabeth project produced over 230,000oz gold, and comes with a permitted, and previously producing mine, a mill, and a tailings storage facility that can be re-started if TMR proves a decent resource size.

TMR recently completed a capital raise at an average price of 25.1¢. The extra $6.28M in the bank helps accelerate drilling for the remainder of the Canadian drilling season, while adding local and international institutional investors to the register.

Read more: Why we invested in TMR, our investment plan, our expected future milestones, and our past commentary.

The first drill holes were designed to clip the top of the EM target structure at the shallowest point, and visible sulphides were intersected which was a good result.

Today’s assay results confirmed that the visible sulphides contain prospective mineralisation... which is even better.

Now that mineralisation is confirmed, the next step is to test the strongest and best parts of the EM conductor which are located deeper underground, where we hope the big hits will be delivered.

We are now looking forward to GAL’s follow up diamond drilling. For us, this is the main test of the Delta Blues prospect. This will be deeper drilling that will test for economic mineralisation beneath the intercepts at DB2 and determine the source of the strong EM conductor at the DB1 target.

This will be done after GAL completes additional down hole and surface EM surveys, enabling it to target the best parts of the conductors and maximise chances of a successful outcome.

GAL already had a fair amount of cash in the bank, but the raise saw cornerstone investments from major shareholders — the Creasy Group and IGO — which we view as validation that GAL is on the right track.

As a key material in electric vehicle batteries, nickel is expected to be among the raw materials that stand to gain most from a global transition to low-carbon energy sources. The nickel price is now at seven year highs as surging Chinese stainless steel production also fuels demand.

Read more: Why we invested in GAL, our investment plan, our expected future milestones, and our past commentary.

Early stage gold, nickel and base-metal explorer, BPM Minerals (ASX:BPM) has completed the maiden drilling program at its Santy Gold Project — one of what we consider to be a BPM ‘side bet’ that it is working on.

Cool story... However, our primary reason for investing in BPM is its main Hawkins lead-zinc project — next to $316M Rumble Resources’ project — which BPM is aiming to drill before Christmas.

The really good news is that Rumble has been having a great run lately, back on the way to 60¢ — any positive movement or news in Rumble is good for BPM.

Read more: Why we invested in BPM, our investment plan, our expected future milestones, and our past commentary.

Last week we took a look at Pursuit Minerals (ASX:PUR) drilling results from the results of the first two holes completed at its Phil’s Hill project, where it is exploring for PGE-nickel-copper mineralisation — ”PUR first drill results are in - More coming in a few weeks”.

You may recall that these first two holes of the maiden 1,500m diamond drilling were not a “hole-in-one”, meaning they didn’t intersect the EM conductor that PUR has identified underground.

The EM conductor has shown that something is down there, PUR just hadn’t directly hit it. This can happen because the ground EM survey only returns a “rough 2D outline” of the complex 3D conductive body that is underground.

For that reason, PUR decided to pause drilling and run downhole Electromagnetic (DHEM) surveys last week. This was to ensure that the rest of the diamond drilling program will be better directed in locating the rocks that give a strong conductive response.

The second hole showed a very strong conductor of >5,000 s/m at 142m. The existing hole had been drilled over the top of the conductor, missing it by just 10m...

Anything above 5,000 s/m is very strong for an EM conductor.

Samples from this hole are at the laboratory for assay.

Results from the first hole identified a conductor approximately 16m to the north of the existing hole.

These DHEM responses were very definitive, indicating a highly conductive off hole anomaly consistent with the MLEM and VTEM responses.

PUR’s drill rig is expected to be back on site next week to recommence the drill program with a re-drill of Plate 10a based on the new DHEM target.

A few folks appeared to be selling a day after the first 2 holes of a MULTI hole campaign got announced a week ago, the share price has popped back up a bit after perhaps people are realising there are still a few drill holes to upcoming in this program...

Read more: Why we invested in PUR, our investment plan, our expected future milestones, and our past commentary.

CPH is a medical cannabis and psychedelics for mental health stock, two growth industries we are excited about long term.

Today CPH confirmed two new Purchase Orders (POs) with a combined value of over A$330k for its human health hemp and cannabis products from a Swiss based health products distributor. The POs represent important milestones for CPH, signalling that the company is headed in the right direction in terms of continued revenue growth.

Last week CPH put out a new Investor Presentation, and with a potential move to a Canadian stock exchange via a takeover now behind it, we are looking forward to seeing what CPH can deliver under its new strategy as it aims for a NASDAQ listing.

We like how the company appears to be strengthening its management team via hires like William Lay (ex Canopy Growth M&A). CPH hinted in an announcement last week that it is searching for a new US based CEO so we are keeping an eye on how this plays out.

Read more: Why we invested in CPH, our investment plan, our expected future milestones, and our past commentary.