#VEGAN: ROO Launches into $27B Plant Based Meat Market

Major players in the faux meat market, such as Beyond Meat (NASDAQ: BYND), are redefining meat eating experience.

After a highly successful IPO in May, Beyond Meat is currently trading at US$163 per share, with an almost US$10 billion market cap as it goes head to head with the US$1.4 trillion global meat industry.

Beyond Meat’s valuation alone speaks volumes to the growth and acceptance of the industry, as the global population wakes up to the fact that consuming meat is contributing to the destruction of the environment — increasing carbon emissions, water consumption and deforestation.

Another company looking to redefine meat consumption to have a positive environmental effect is Impossible Foods.

Earlier this year, Impossible Foods raised US$300 million to take plant based meat mainstream. The company has raised over US$700 million in total, and is valued at US$2 billion, should it decide to IPO in the near to medium term.

Impossible Foods has attracted several savvy Silicon Valley billionaires, who are lining up to get onto the next wave of billion dollar unicorn plant-based meat companies.

Yet, it was US burger chain, Burger King that really set the cat amongst the pigeons (or the cow amongst the plant-based patties) when it began testing Impossible Foods’ plant-based burger at locations in St. Louis in April this year.

The move resulted in a strong growth in traffic, leading to the giant burger chain extending the Impossible Whopper to six more markets.

This is a burgeoning trend that is likely to accelerate over the coming years and leading innovators are only beginning to scratch the surface in this industry.

Roots Sustainable Agricultural Technologies Limited (ASX:ROO) is looking at having its own ag-tech influence.

ROO has just begun a planting program to examine the effects of its Root Zone Temperature Optimization (RZTO) and Irrigation by Condensation (IBC) technologies on several protein-laden crops, including peas and beans. The goal is to increase the content of leghemoglobin – also known as “heme” — a form of haemoglobin in plants and the key ingredient in what makes plant-based meats so tasty.

Of interest to current and future investors, is that ROO has already made headway by reporting yield increases of 40% on beans using Roots RZTO technology.

Putting two and two together, ROO is looking to serve up its tech to the agricultural producers supplying to the fake meat market.

How will it do so? To find out, let’s catch up with: 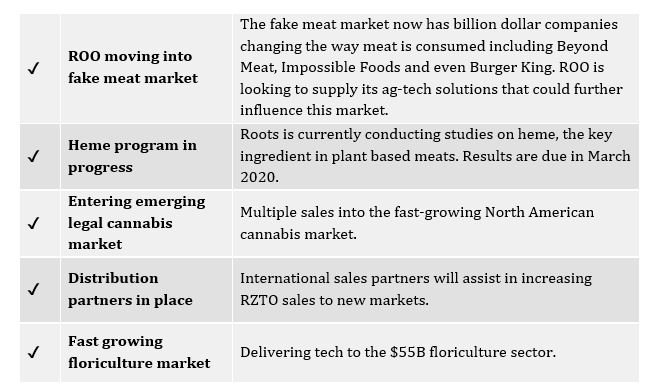 Its focus on climate and water is important to ROO’s growth trajectory: plant-based meat agriculture is fast becoming a multi-billion dollar industry and ROO wants to give growers in this industry a big leg up. 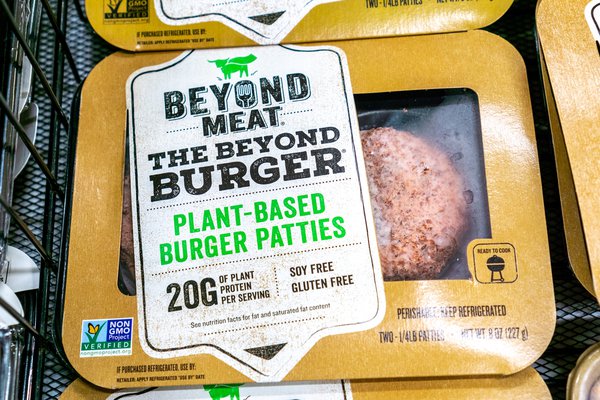 In essence, moving into faux meat market could be quite lucrative for this ASX agtech junior. It could also be a reputational play amongst ethical businesses, the community and investors.

So what exactly is ROO doing?

The company will be planting crops at its research and development hub in central Israel where the leghemoglobin – remember that’s the key ingredient in plant-based meats – content of beans will be measured in a two-part program using ROO’s root zone temperature optimisation (RZTO) technology.

The root zone cooling will be the first thing measured. Following this, the Israeli autumn and winter seasons will play host to a second round of crops tested using root zone heating.

Roots’ Irrigation by Condensation (IBC) technology will then be used to examine the effect on protein content of the ‘deficit irrigation’ concept using irrigation from just humidity in the air.

The results from each plot will be compared with a control plot planted under the same ambient conditions and the results compared.

Positive results will could see ROO influence the anticipated US$27.9 billion demand for plant based meats by 2025.

Growing interest in meat replacement crops has accelerated the search for high protein vegetables and technologies that can increase the protein content in any given crop.

It will essentially feed into a zeitgeist in which the health benefits of plant-based proteins over meat sources is becoming a major social movement.

Ethics around livestock management, and environmental issues are also a key focus of those extolling the virtues of a non-meat based lifestyle.

The numbers surrounding this movement are interesting: 1kg of beef requires 15,415 litres of water, whereas production of 1kg of pulses has a water footprint that's 74% lower of just 4,055 litres.

Here’s a look at the water footprint of various meats.

New York Times columnist Timothy Egan writes, “Industrial agriculture to produce meat is the coal-mining of food production. Producing a single beef burger takes about 660 gallons of water — equivalent to a full week of water use by the average household in the United States.”

Essentially, behind the rise of the fake meat revolution is a growing awareness of climate change responsibilities.

This article explains how a plant-based diet can fight climate change: 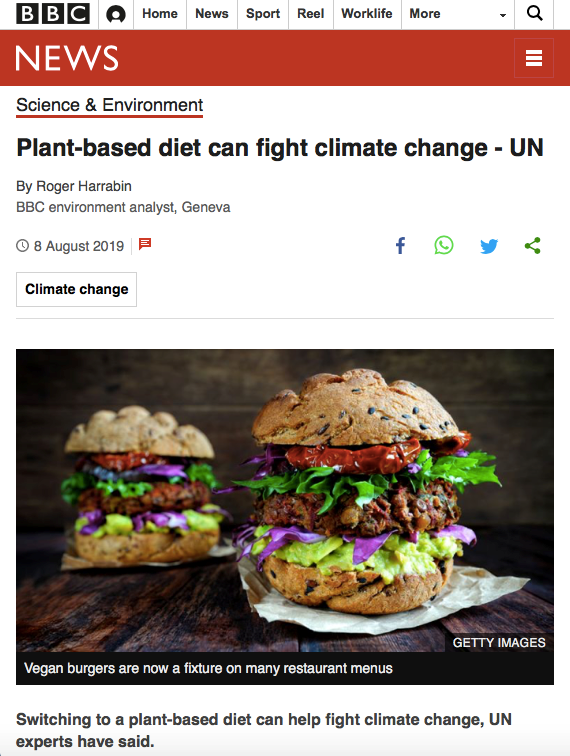 Meat is still king, but as one kangaroo is saved at a time, so too is the climate.

Here’s a look at how powerful the meat industry is in the US alone: 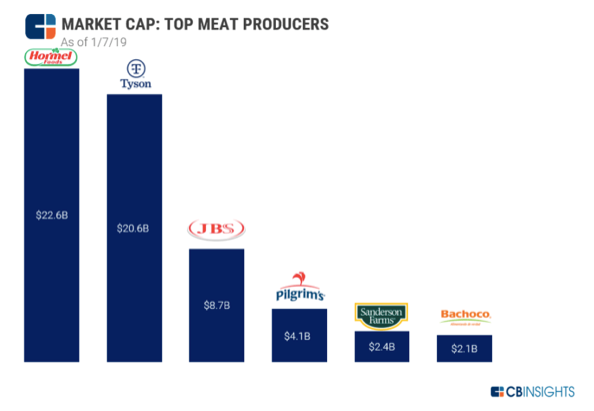 The top six meat companies are worth over US$60 billion combined. However, the monopoly is starting to be challenged.

How heme (and ROO) is helping the climate

Heme is similar in look, preparation style and flavour as beef, but without the environmental impact and negative health effects of real beef.

And it is being used more and more in faux meat products.

This video gives an insight into how Beyond Meat is changing the market:

Beans and peas are examples of crops from which Heme can be extracted.

Roots CEO, Dr Sharon Devir explained that bean and pea protein is becoming more accepted in communities and is rapidly gaining popularity among plant-based meat manufacturers at a global level thanks to its high protein content and health benefits.

Leading manufacturers in the global plant-based protein industry have shifted resources to developing common meat products, using pea protein as a base for future product development.

ROO is thus fast-tracking its studies in this field to see how it can help plant growers, whilst having an influence on this growing market segment.

The company expects results from its research planting activities to land in March 2020.

Further activity in the sector

According to CBInsights there are plenty of start-ups using technology to engineer meat or manufacture it from plant-based products. Products can include beef-free burgers to pea-based prawns.

Clearly these companies and the scientists behind the work are set to disrupt the industry.

I don’t need to go any further in explaining the rise of the fake meat industry. You get the point by now.

So if ROO can help heme growers, its agtech solution may be behind the fake burger you’re stuffing hungrily down your throat.

Now, I’m not one to say ‘give up meat’, I love meat. But it’s certainly worth thinking about the way it is consumed and the amount of meat consumed.

Remember the old ad, ‘I can’t believe it’s not butter’, well it seems we have transcended that and the new form of edible disbelief is directed squarely at the feet of ... meat. Now we have what is affectionately known as fake meat, vegetarian meat, faux meat, or ethical meat.

ROO will finish its tests in March, at which point we’ll have a better understanding of how it can affect the growing meat free product market.

The company is already having an impact in the cannabis space and with basic crops such as tomatoes, so there is no reason to think it can’t have a similar influence with regard to the ‘I can’t believe it’s not meat’ movement. 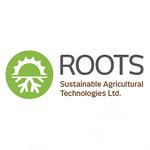