Assay results are now just a week or so away and we are watching out for some high grade results to kick off TMR’s 2021 season with a bang.

We are also waiting on interpretations of TMRs recently run high-resolution aeromagnetic and radiometric survey over the entire 115 square km Elizabeth project - which should generate new targets for drilling (expected any day now).

But what happens next if the drill results are great and TMR proves out a gold resource?

There is more to being a successful miner than just sinking the drill bit, striking some mineralisation and producing some impressive drill results.

It’s also important to make sure the metal in the rocks can be separated and processed relatively easily, and not rack up expensive processing costs.

While our portfolio company TMR waits for its next batch of drilling news (we expect in the next week or so), it has been getting some independent reviews of historical metallurgical work that has been completed on its gold project in Canada.

Metallurgy results might be less glamorous than drill results, but metallurgy is extremely important in determining whether or not rocks in the ground can be easily processed and turned into valuable metals.

TMR’s Canadian gold project already has a resource of over 200,000 ounces at 12.26 g/tonne (inferred), plus permitted mine infrastructure that should fast track it into production when the timing is right.

TMR is drilling now with the aim of updating the resource estimate, and it is ultimately looking to deliver a Scoping Study on the project.

Today we will take a look at what the TMR’s metallurgy results mean, but first:

About Our Investment in TMR

We originally took a position in TMR at 20c back in February 2020 because we liked its Canadian and Ecuadorian Gold projects, active drilling campaign plans and small number of shares on issue.

We increased our position in November 2020 at 34c.

TMR spent some time above 40c during the COVID impacted 2020 drilling season but we have held on hoping for a more significant return in this 2021 drilling season.

We further increased our position in April 2021 at 14.5c in the placement and again for a fourth time in June at 17.86c... (see our investment plan at the end of this note for more detail).

We are still holding our entire position and have unlocked the 12 months capital gains discount in our early TMR tranches... now we just need the share price to go up on the back of some great drill results.

TMR is one of our biggest positions that is currently sitting around our average buy-in price of ~18c.

TMR was one of our earliest portfolio investments but had a disappointing 2020 - We are pretty excited about TMR over the next 6 months during the new Canadian drilling season ahead - this is the window where all the action will be for TMR shareholders (good OR bad).

Metallurgy results: What we learnt about TMR’s gold today

Earlier this week TMR released the results of an independent review and testing of its gold. Here are they key takeaways:

Through the efficient processing techniques outlined recently, TMR has positioned itself to take another step towards adding another layer of compelling financial metrics for its upcoming Scoping Study / Preliminary Economic Assessment.

These metrics will positively impact the upcoming completion of a scoping study and preliminary economic assessment following the release of a maiden mineral resource estimate - all of these will be key catalysts that could see the company return to its 12 month highs of around 40 cents per share.

The Canadian drilling season extends through to December before the winter hiatus, and in the next six months management will be looking to lay the foundations for an increase in resource. 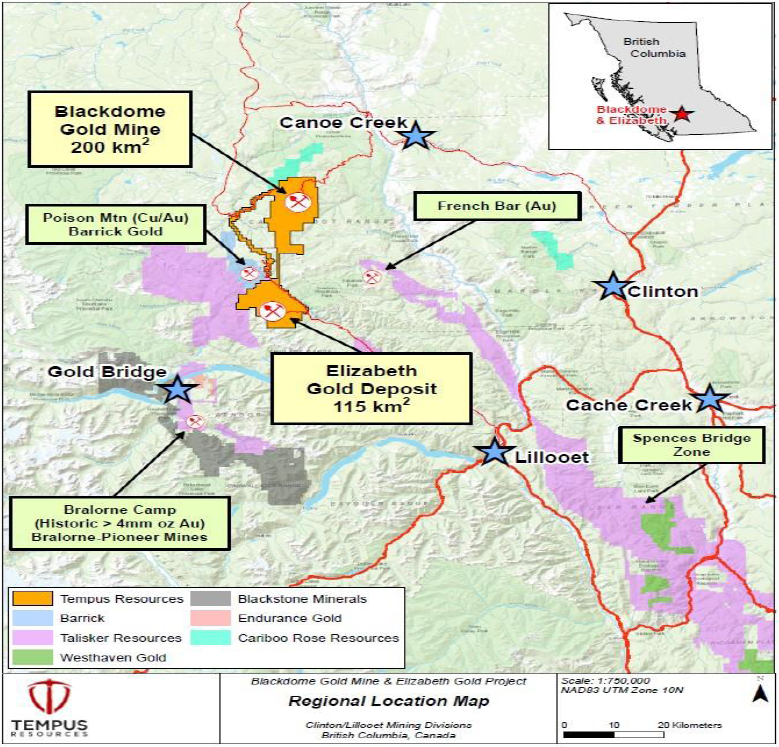 How is TMR aiming to create value?

The importance of being able to utilise the Blackdome processing plant is enhanced by its close proximity to the Elizabeth gold deposit as shown above.

Results released this week from metallurgical work conducted by TMR are a prime example of how the application of best case processing can have a substantial impact on a project’s economic returns.

Following extensive reviews and testing, TMR confirmed that its Elizabeth high-grade gold mineralisation is not refractory and that high recoveries can be expected from various processing routes.

In layman’s terms, refractory gold can at times be considered as ore that can’t be economically processed.

An important takeaway is that TMR not only has a resource that is more amenable to economical processing, but test work indicates that recovery of up to about 95% can be achieved in the production of a high grade gold concentrate.

As indicated below, all three tests that included both gravity and flotation after basic crushing and grinding in the flowsheet achieved total gold recoveries of 92.5 to 95.1%.

Following various test work it was determined that ore from both Elizabeth and Blackdome appeared to both contain most of the gold as free particles that are easily liberated and recovered by either flotation or cyanidation.

Consequently, these ores should be able to be processed together without the company incurring a reduction in recovery.

Providing a means of comparison, gold mines process ore using various techniques to produce an alloy composed primarily of gold and silver, which is called a dore bar.

The composition of dore can vary significantly between mines, but generally the gold dore bars the Perth Mint processes are composed of between 70-80% gold and 10-15% silver.

It has been determined that the optimum processing technique at the Blackdome plant should recover 94.7% in gold dore bars, making this a valuable saleable product for TMR.

The test work conducted in 2010 could be considered adequate for a revised preliminary economic assessment (PEA) unless recent results indicate that the mineralogy is significantly different from the samples tested in 2010.

Key near-term studies for TMR will include the following:

In terms of broader upcoming milestones, these are the developments to look out for: 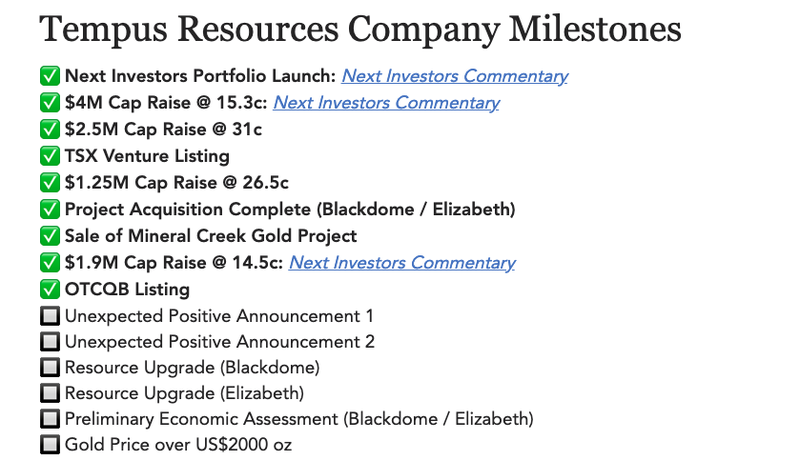 The main interest for TMR over the next 6 months is the drilling out of the Elizabeth project (shown with red arrow), which was heavily impacted by COVID in the 2020 season and is why we think the TMR share price has stagnated. Today we added the Metallurgy work milestone (green arrow): 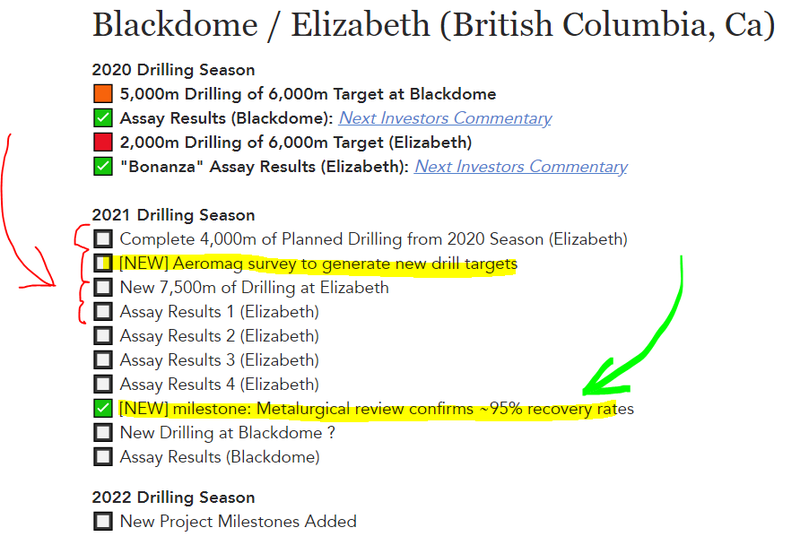