Our junior gold investment Los Cerros (ASX:LCL) has an exciting pipeline of gold prospects in one of the premier gold hotspots of the past two decades, the Mid Cauca belt in Colombia.

For the past year, LCL has been aggressively drilling Tesorito South, a gold porphyry discovery that keeps getting bigger and bigger with each assay announced - it just won’t stop.

1km away from this new gold system (and still on LCL’s permit) is a known gold system called Miraflores.

A few months ago (investor preso slide 9) LCL shared a theory that there two separate gold systems might actually be connected underground as one GIANT gold system.

Over the last few weeks LCL used drones to run aeromagnetic surveys whilst the team ran deep penetrating Induced Polarisation surveys on ground in between the two gold systems to test if they might be connected.

In simple terms, if there is material under the surface that conducts electricity (big purple blob) - there is a chance of a porphyry system... it could be gold OR copper... Or just a bunch of boring old rocks.

This is EXACTLY what we were hoping to see - and now we want LCL to start popping some drill holes into this big purple blob to start testing for gold grades.

Here is how the story unfolded...

What we were hoping for

Below is an image we shared four weeks ago. We were hoping that a drone IP survey would reveal chargeability in-between the two separate gold systems - hinting that it might be one big fat connected gold system: 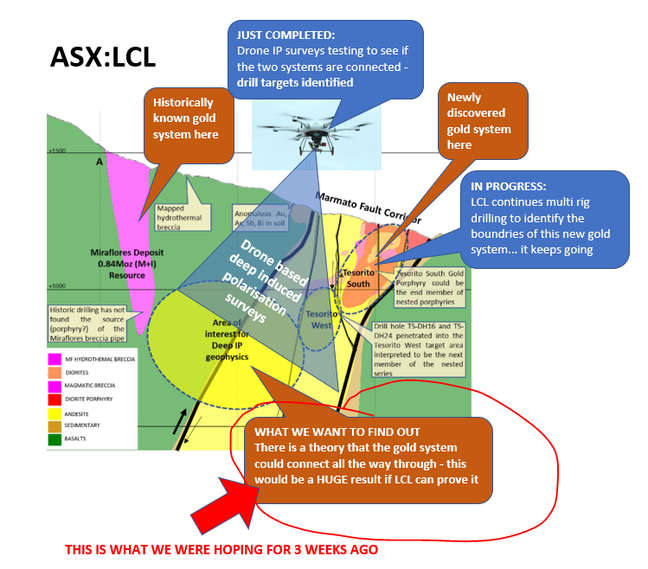 What happened this morning

Today LCL announced that the drone IP survey results delivered exactly what they anticipated (and what we hoped for) - a giant colourful blob of chargeability, low resistivity above a magnetic high.

Here is what the drone results showed, just look at that glorious purple blob of conductivity (the grey areas show the two separate know gold systems): 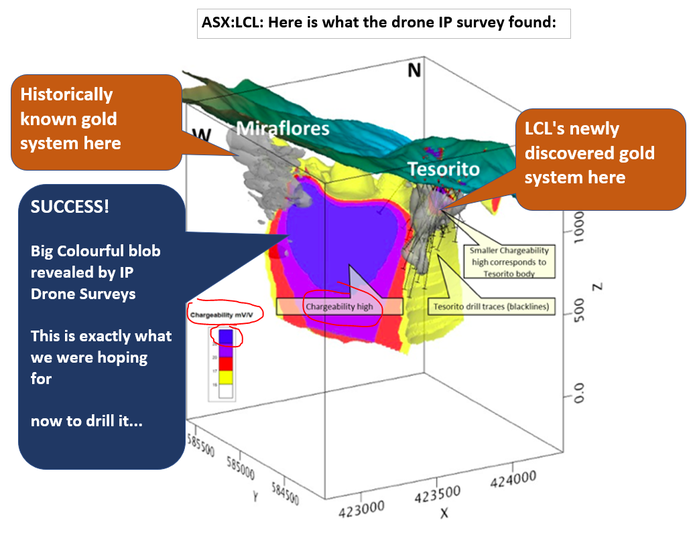 The end result of this is that LCL has several new targets to drill in that purple blob.

You can get an idea of how exciting these targets are by the fact that LCL is mobilising 2 of their 4 rigs from their current tasks to start drilling it shortly.

You can see that there is an area showing magnetic and chargeability/conductivity highs, which indicate a common causative source - perhaps a possible gold porphyry - shared by Miraflores and Tesorito.

What we want to see next from LCL:

Is there gold in that colourful blob? Two drill rigs have now been sent to find out, so we are watching how this progresses. Also we’re pleased to see that LCL has decided to do more IP drone surveys to see if there are more big blobs nearby, especially at the Ceibal prospect to the south. 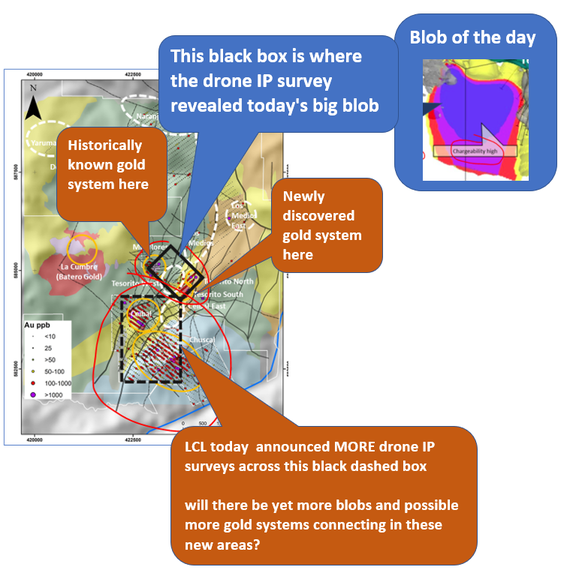 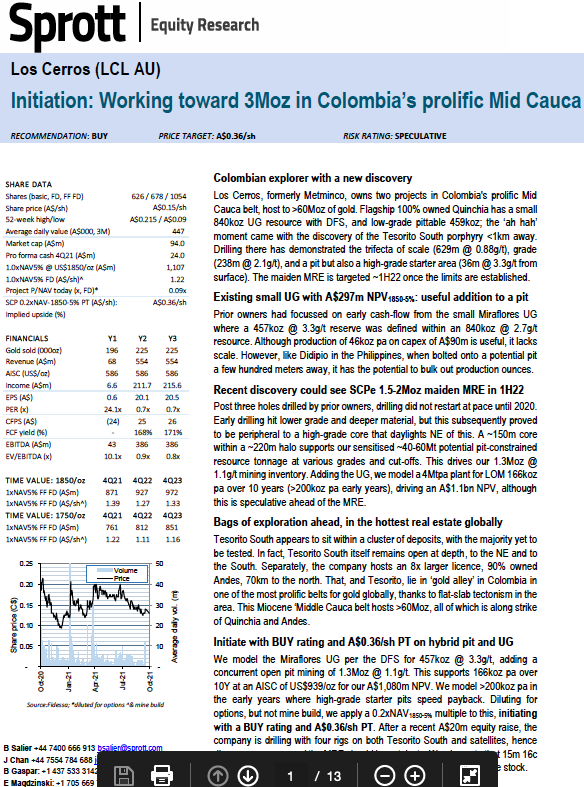 Target price 2.5 times current LCL share price
Sprott has placed a 36 cents per share target for LCL - which would value the company circa $230m market capitalisation if realised.

Analyst target prices can be a good data point to consider regarding the upside / downside of a company, but it pays to see what assumptions are made.

Here, the analyst is modelling production from two nearby sources - Miraflores, where there is an existing 840koz resource, and Tesorito - ultimately leading to production of 166koz p.a average for the next decade.

We believe the assumptions are reasonable, though note that the assumed gold price for the life of mine is higher than the current spot price.

Interview with the LCL CEO

Finally, we watched LCL’s managing director Jason Stirbinkis provide direct insights of recent developments at Quinchia, and Tesorito in particular, on this recent Crux Investor interview. From about the 9 minute mark, Jason deep dives into the plan going forward for Tesorito.

LCL: What are the risks?

Country - Colombia is a developing nation, and so has its own set of challenges for foreign enterprises operating there. However, the nation has made great strides as an investment destination in the last five years. In the 2020 Fraser Institute Annual Survey of Mining Companies, Colombia was ranked as the 28th most attractive mining jurisdiction, one spot behind NSW. LCL also has the vast majority of their workforce as local Colombians.

Exploration - LCL is still to define resources at all but one of their prospects, and so there is the potential that more drilling does not translate ultimately into JORC-defined resources. Furthermore, the drilling into new areas (such as testing for a deep porphyry between Tesorito and Miraflores) is high risk - even with all the current data, there is a good likelihood that economic mineralisation is not found and expensive.

Economics - It is still early days for Tesorito, and we really are just guessing at the moment how commercial an opportunity it could become. Until we see a scoping study and then a feasibility study, there is the risk that the good assay results do not translate into a profitable enterprise.

Disclosure: The authors of this article and owners of Next Investors, S3 Consortium Pty Ltd, and associated entities, own 4,481,041 LCL shares.