EXR has surprised us and the market by signing an MoU to develop its green hydrogen project with SoftBank subsidiary SB Energy.

We first Invested in EXR back in 2019 as our Energy Pick of the Year.

EXR had secured a giant exploration permit in the Gobi Desert in Mongolia and was hoping to discover gas on energy-hungry China’s doorstep.

The company went on to make Mongolia’s first ever gas discovery and have been working since to prove out its size and create a development plan.

While this was happening, EXR realised that it has:

... the perfect opportunity to investigate a green hydrogen project.

This wasn’t a spur of the moment decision — EXR started this work BEFORE the green hydrogen market became a hot theme.

SoftBank is a Japanese conglomerate founded in 1981 by Korean-Japanese billionaire technology entrepreneur, investor and philanthropist Masayoshi Son, who remains its Chairman, CEO and largest shareholder.

The same SoftBank that has made hundreds of other investments, including other big names such as Uber and WeWork.

And now, the ¥74 trillion (A$78 billion) capped Japanese multinational conglomerate has signed an MOU with our ASX-junior EXR with the eventual goal to develop a gigawatt-class green hydrogen production project.

This is the exact same place as EXR’s 7 million acre (30,000 square kilometre) Production Sharing Contract (PSC) — the Nomgon IX PSC, where EXR has discovered coal seam gas and is working to develop a hydrogen project.

EXR has signed a MOU with SB Energy Corp. (a wholly-owned subsidiary of SoftBank Group) — a major step forward in progressing its ambitions at its hydrogen project Mongolia.

While it is Masayoshi Son’s tech investments that grab the headlines, SoftBank also invests in renewable energy projects via SB Energy.

The group is working to accelerate the adoption of renewable energy, such as large scale solar and wind power generation facilities and has previously invested in Mongolia’s renewable energy industry, where it has the operational 50MW Tsetsii Wind Farm in the Gobi Desert.

The creation of this renewable-energy focused subsidiary followed a revelation by SoftBank's billionaire CEO and Chairman Masayoshi Son in 2011 after Fukushima’s nuclear meltdowns. At the time, alternative-energy sources made up less than 1% of Japan’s energy supply and Masayoshi Son set about changing that. 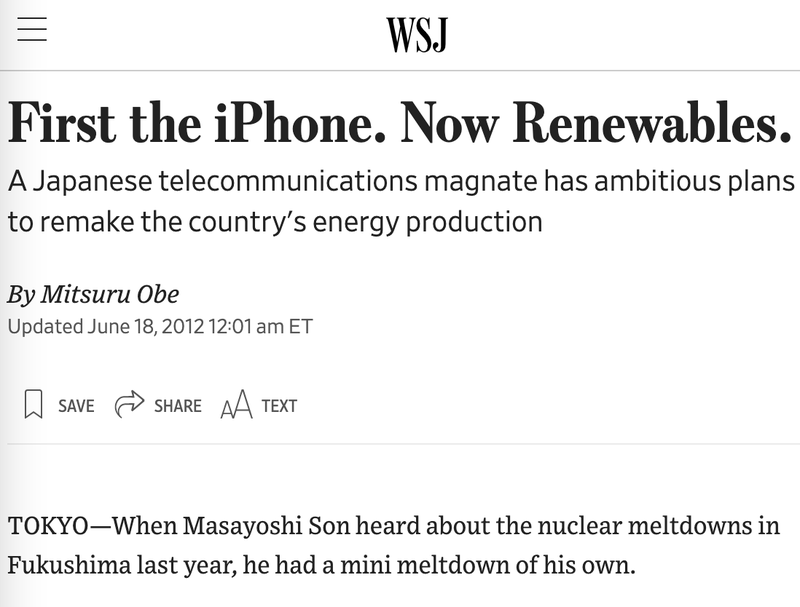 Amongst other things, Masayoshi Son went on to propose the Asian Supergrid — a massive system of interconnected electricity grids across North Eastern Asia that allows for the exchange of power from renewable and other clean energy resources like solar, wind, and hydro (and gas) across the continent.

During the decade since, he has been working to see renewables, such as solar and wind power, replace electricity generated by nuclear reactors and fossil-fuel plants.

And now, his plans appear to include green hydrogen production in Mongolia.

Under the joint Memorandum of Understanding (MoU), EXR and SB Energy will cooperate on research and development of the “Gobi H2” green hydrogen production project in the Gobi Desert of Mongolia — the first of SB Energy’s green hydrogen pursuits.

The plan is to:

EXR stepped up its focus on hydrogen business in April 2021, having recognised the immense opportunity and potential to produce valuable green hydrogen from its gigantic landholding on the Mongolia-China border.

EXR had already made successful inroads towards developing a gas project at its Nomgon PSC, including its first gas discovery in February 2020, before revealing its hydrogen plans.

SoftBank already has an operational wind farm in Mongolia — the 50MW Tsetsii Wind Farm in the Gobi desert which generates 50MW, a renewable energy resource that could be used to produce green hydrogen energy.

Leading up to this MOU, both parties have been gathering renewable energy data in the Gobi region. Their respective strengths will complement each other in jointly developing and achieving commercialisation of the green hydrogen project.

EXR’s primary goal for 2022 is now to materially advance a 10 MW pilot green hydrogen project. We note the company had a very healthy $25.3 million in the bank as of 31 March.

Development of the green hydrogen project is simply an opportunity too good to ignore — Mongolia’s Gobi Desert is blessed with abundant renewable energy sources, with plenty of sunlight for solar energy and the strong winds required for wind farms.

This renewable energy is vital in producing GREEN hydrogen energy, which is produced by electrolyzing water using renewable energy and which produces zero carbon dioxide emissions, as compared to its less environmentally friendly counterparts, blue and grey hydrogen, that are produced using fossil fuels.

Today’s announcement is a major step towards our #3 Objective for EXR for this year: Evaluate the Commercial Viability of a Hydrogen Project - and having a MoU partner like SoftBank on board is a massive tick for us. Specifically, we stated in our Investment Memo in March that we wanted to see updates on MOUs signed with the government, and other stakeholders, exploring the potential for a green hydrogen project over the project area. 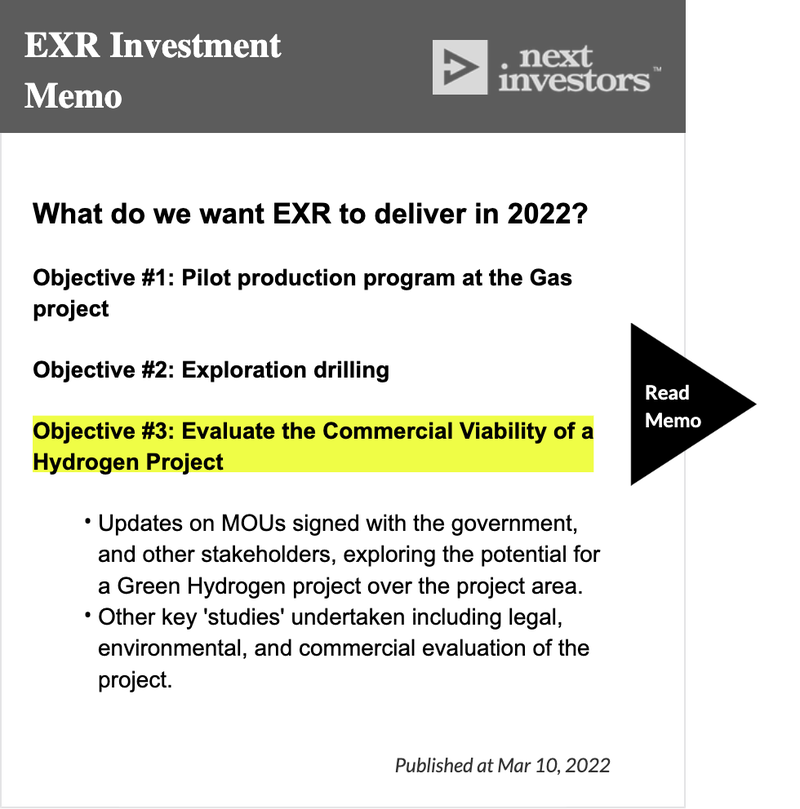 We first Invested in EXR three years ago, in July 2019, naming it our Energy Pick of the Year. While we Free Carried and Took Profit during EXRs price run in 2020 and 2021, we added more to our position in January this year at 16.5c.

We have remained Invested over the years and added to our position multiple times - much to do with our belief in the management team.

EXR’s ability to secure this MOU with a partner of the calibre of SoftBank, following a recent meeting of the two in Japan, has well and truly validated our belief in the management team.

Masayoshi Son, who was said to have once owned 25% of “the internet”, lost billions in the dot-com crash in the late-90s. SoftBank then invested in Alibaba at $20 in 2000 — a decision that revived Masayoshi Son’s fortune, before it went on to invest in big names such as Uber and WeWork.

We think SB does some of its best work with small venture capital style investments like its Alibaba investment. We're hoping a similar thing plays out with their proposed partnership with EXR, in turn helping our EXR Investment re-rate.

We like that SoftBank has long been serious about developing Mongolia’s renewable energy infrastructure.

Back in 2011 Masayoshi Son proposed the Asian Supergrid — a massive system of interconnected electricity grids across North Eastern Asia that allows for the exchange of power from renewable and other clean energy resources like solar, wind, and hydro (and gas) across the continent. 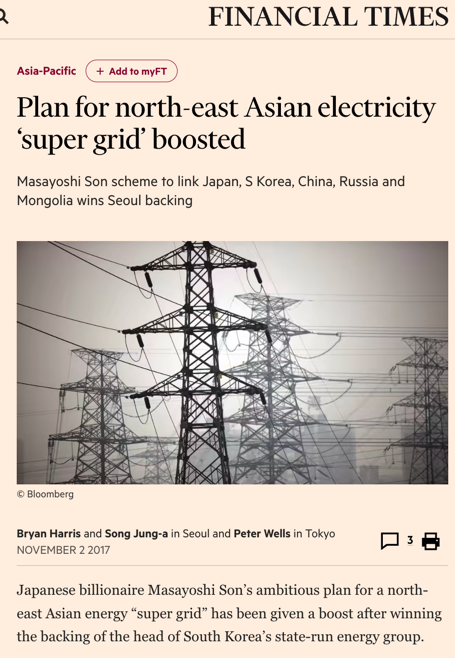 In order to do this, the Asian Supergrid project plans massive new transmission lines through the Gobi Desert — where EXR’s massive PSC is located.

As part of that plan, in October 2017 SB Energy announced that its 50MW Tsetsii Wind Farm in the Gobi desert had started commercial operations, marking “the first power generation business in Mongolia for SB Energy and the SoftBank Group” — suggesting more investment in Mongolia was always on the cards.

Masayoshi Son said at the time, “The SoftBank Group started renewable energy development in Mongolia to realize our multinational power grid plan called the Asia Super Grid, first announced in 2011. I’m very pleased that the commercial launch of the Tsetsii Wind Farm marks the first step for the SoftBank Group to establish a renewable energy business in Mongolia under the Asia Super Grid project, in addition to India and Japan".

As green hydrogen requires a green energy input, SB Energy can utilise this existing wind farm in Mongolia in its partnership with EXR. 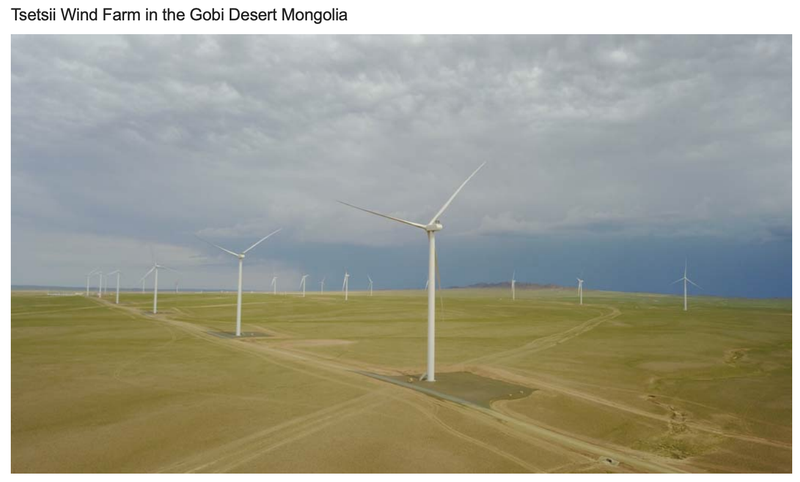 The Watts Business generates power using renewable energy. It operates power plants with a total capacity of 723.0MW in Japan — this is equivalent to the power demand of approximately 224,688 households. It also operates the 50MW wind farm in Mongolia’s Gobi Desert.

Through these three categories, SB Energy continues to concentrate on building energy platforms in an era that we think will be defined by renewable energy production.

Mongolia’s sizable renewable resources and proximity to potential hydrogen markets makes it a potential Tier One location for future green hydrogen production — the overall potential of solar and wind energy in the Gobi Desert is about 2,600 TWh.

Not only does Mongolia boast exceptional renewable resources, it has a large potential hydrogen market in China and throughout Asia, accessible by pipeline rather than boat. These advantages mean that Gobi H2 could be considered a globally significant, Tier One green hydrogen export project. 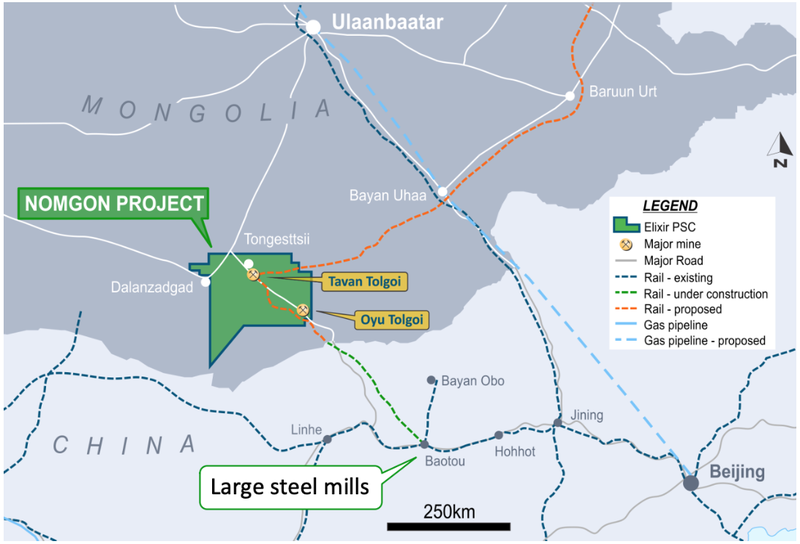 An advantageous location for H2 production

What makes a green hydrogen project successful is the quality of the renewable energy source and the cost of delivery.

Around two-thirds of the cost of producing green H2 is the cost of renewables. Having this ready supply of wind energy, via SoftBank’s established Gobi desert wind farm for example, will ensure a low cost operation.

Shipping hydrogen by boat costs multiples (~$20/GJ) of shipping the same energy in the form of natural gas (at ~$5/GJ). Having access to markets by pipeline is a big advantage - especially compared with seaborne supplies — so we think this works in EXR and SB Energy’s favour as they can supply H2 to Chinese markets by pipeline from Mongolia.

Below are the various costs for transporting hydrogen with pipeline transport in red: 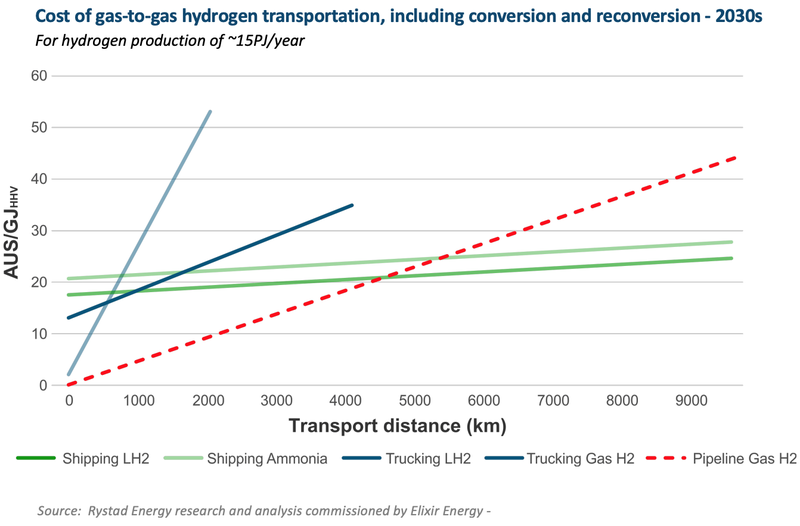 That lower cost over distances of less than 4,000kms is what we’re particularly interested in.

While it is still early days for EXR and SB Energy, we believe that...

EXR’s Mongolian green hydrogen project could become one of the world’s most compelling renewables projects.

That being said, our Investment in EXR is not without risks, some of which we have outlined in our 2022 Investment Memo: 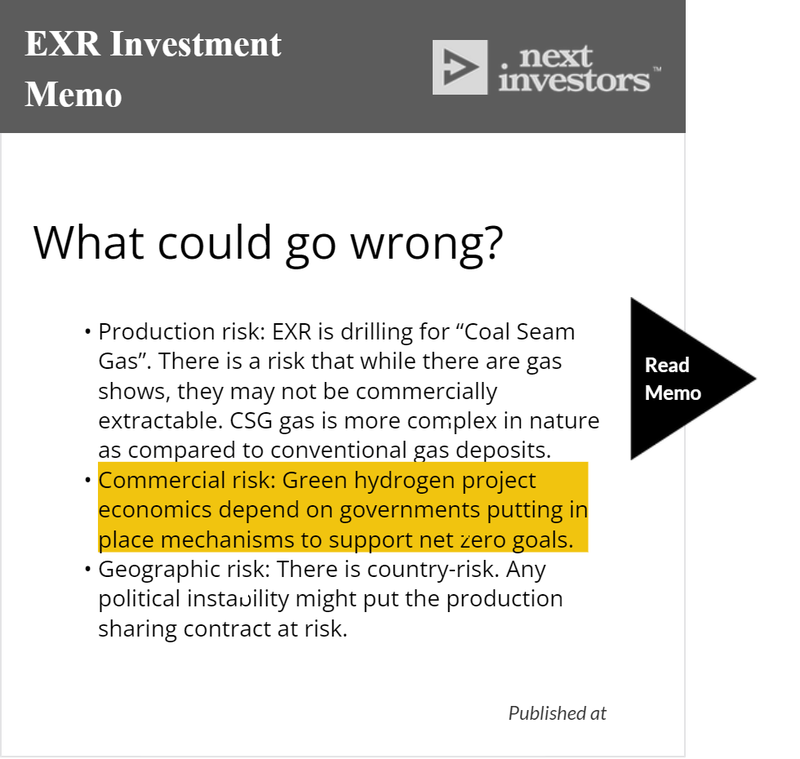 We see the continued commitment of governments to supporting the nascent hydrogen market as a key risk. EXR may not have a product to sell with its hydrogen if this support wanes.