Disclosure: The authors of this article and owners of Next Investors, S3 Consortium Pty Ltd, and associated entities, own 3,500,000 EXR shares at the time of publication. S3 Consortium Pty Ltd has been engaged by EXR to share our commentary and opinion on the progress of our investment in EXR over time.

Our 2019 Energy Pick of the Year Elixir Energy (ASX:EXR) is developing two energy projects in Mongolia, near the Chinese border.

Today we are launching our 2022 Investment Memo for EXR.

The memo provides a short, high-level summary that outlines our reasons for investing in and continuing to hold a position in EXR, the risks involved, our investment plan, and the objectives that we want to see achieved in the year ahead.

EXR is a hybrid energy company, advancing both a traditional energy (coal seam gas) project and a green hydrogen project in the sunny and windy Gobi Desert, right next door to (clean) energy hungry China.

We first invested in EXR in 2019 when we named it as our 2019 Energy Pick of the Year, and have been following the stock for over three years now.

We invested in EXR because of its strategic location next to China, vast prospective landholding, strong board and management, and we continue to hold it in 2022 for its gas project, green hydrogen potential and its strong cash position.

And just a few weeks ago we purchased more shares on market at 16.5 cents.

We believe that at its current market cap, if EXR can deliver the objectives set out in our investment memo, mitigate its risks, and the broader macro theme holds strong it should re-rate the valuation of the company.

Last week EXR kicked off its 2022 drilling program. With $28.4M in cash in the bank at 31 December 2021, EXR is well funded to make progress on both the gas and green hydrogen businesses.

EXR has a 24-well drill program planned, in which it will be looking to increase its 24 billion cubic feet contingent resource and to try to throw up more targets for production testing.

Alongside the drilling program, EXR has also planned a two well extended pilot production program, which it expects to start in the middle of the year.

This is significant because success with the pilot production program will affirm commercial gas flows and facilitate EXR’s planned gas fired generation project.

We will be following the EXR story closely in 2022, a year where we expect production testing to potentially take EXR on the next step from explorer to revenue generator.

Today we will be providing detailed insight into why we continue to hold a position in EXR and why we topped up our position on market at 16.5c.

This brings us to our 2022 EXR Investment Memo, in which we outline our investment thesis and three objectives that we expect from EXR over the coming 12 months.

The purpose of the Investment Memo is to record our current thinking as a benchmark to assess the company's performance 12 months from now against our expectations. We have created this memo based on our own opinions and expectations.

As the year progresses, we will be covering EXR’s progress on each objective listed in our Investment Memo. As the objectives are ticked off and the risks to our thesis addressed we will update readers on how we think the company is tracking.

Here is a breakdown of our 2022 EXR Investment Memo: 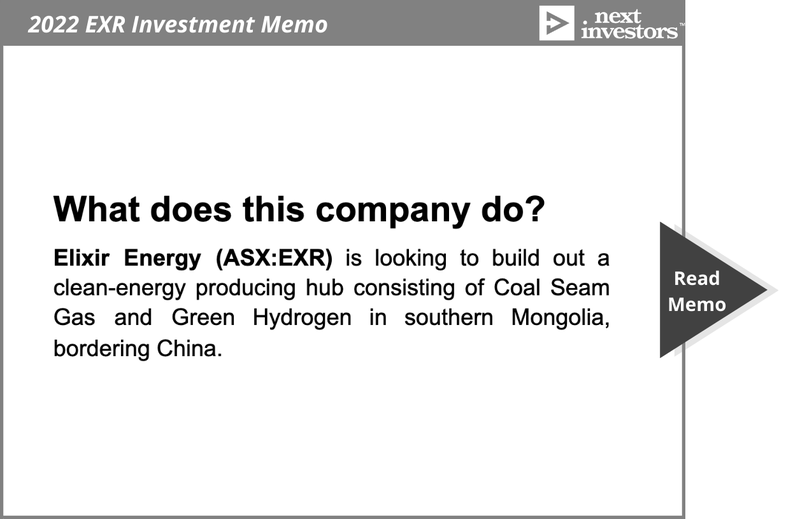 2. The macro theme behind EXR 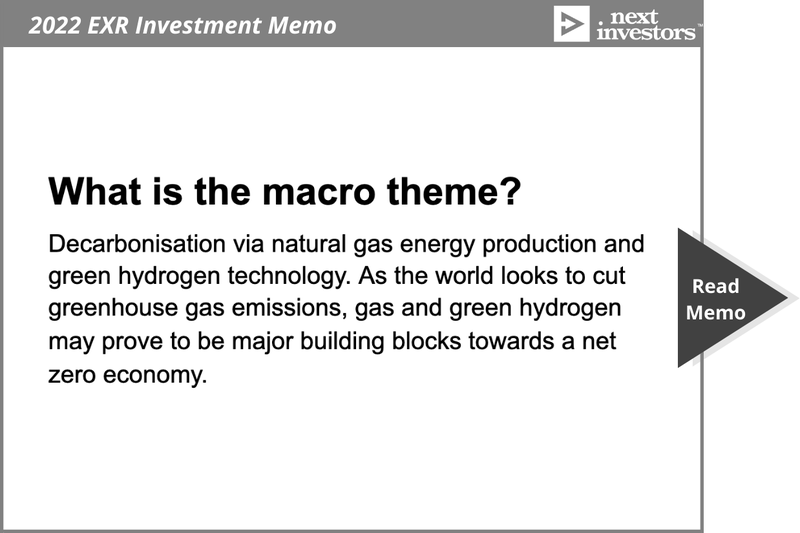 Energy security is a top priority for governments around the world and as energy prices spike amid the conflict in Ukraine, near-term clean energy production projects are looking increasingly attractive to both investors and governments alike.

Cleaner than coal fired power, and without the current limitations of renewables, we view gas as a bridge between traditional coal-fired power plants and a renewable energy run economy.

As a signatory to the Paris Agreement, which aims to drastically reduce carbon emissions, China is taking a number of steps to reduce its carbon footprint. Part of its strategy is to invest heavily in natural gas as an energy source. Natural gas is a less carbon intensive energy source than coal, which still makes up around 60% of China’s energy mix.

EXR’s green hydrogen could also be used in China’s immense steel industry which accounts for 1.8 billion tons of carbon each year and 15% of the county’s total carbon emissions.

3. Why we continue to hold EXR 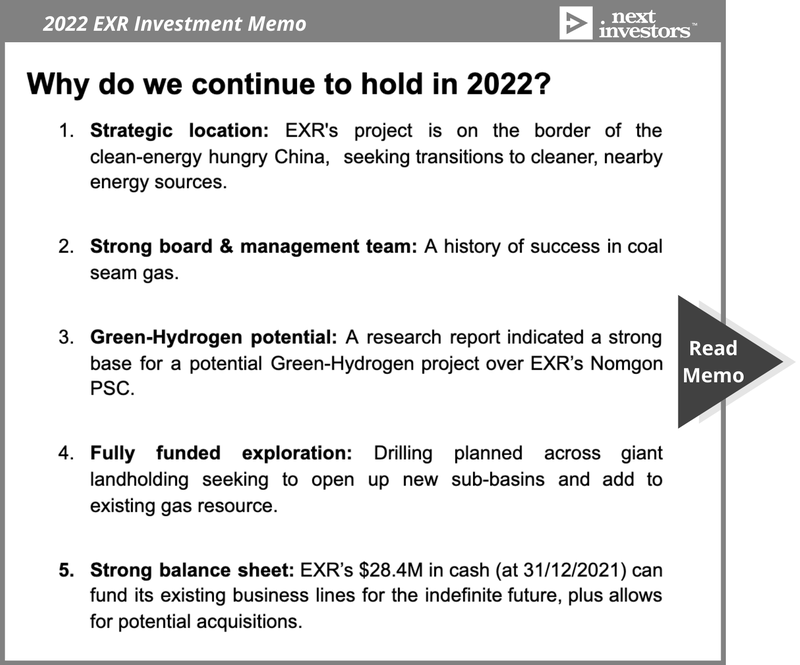 First, EXR’s project sits right near the China/Mongolia border. We like that EXR’s gas and hydrogen projects will be perfectly located to supply an energy hungry China.

Third, this part of Mongolia is particularly sunny and windy, perfect conditions for the renewable energy (wind and solar) that goes into making green hydrogen.

4. What we want EXR deliver this year We have three objectives for EXR this year that will be used as benchmarks against which the company's performance over the coming 12 months will be assessed.

The first objective we want to see achieved from EXR in 2022 is initial coal seam gas production from extended testing of two wells at the Gas Project.

Production is squarely on the cards this year. In the lead up to its maiden pilot production, targeted for the middle of this year, we will be watching for EXR to undertake the design, costings, and required permitting.

As part of its 2022 program, EXR has planned a two well extended pilot production program that is scheduled to commence drilling in the middle of the year. Development is underpinned by EXR’s very healthy cash balance of $28M like all the other cash balance references made prior.

This is a major step in converting its gas resource into a producing economic project.

The second thing we will be looking for, after the pilot production program, is continued exploration CSG programs across the Nomgon PSC landholding.

EXR last week commenced its 2022 drilling program, a proposed 24-well program to be completed over the remainder of the year.

The goal is to increase the project’s 24 billion cubic feet contingent resource and to identify additional wells that can be production tested.

The image below shows the location of these planned drill holes (shown as black dots). As we know, EXR likes to drill at the same time it does seismic acquisition programs so we expect some of these newly identified targets to also be drilled later in the year.

Objective #3 - Evaluate the commercial viability of the green Hydrogen project

Thirdly, EXR will evaluate the commercial viability of a hydrogen project at its Mongolian landholding.

Updates from EXR on MOUs signed with the Mongolian government and other stakeholders exploring the potential for a Green Hydrogen project over the project area will give us confidence. We’ll also be watching out for other key studies including legal, environmental, and commercial evaluation of the project. 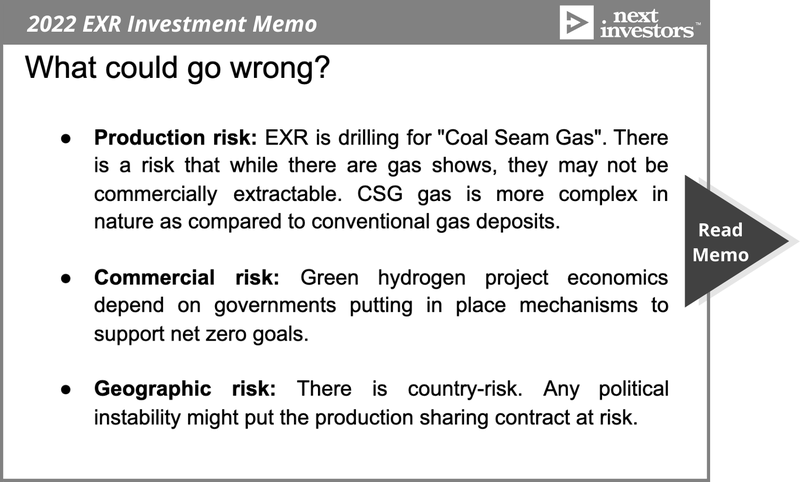 The first major risk to our EXR investment thesis is to do with objective #1 in our Investment Memo.

EXR plans to run a two well extended pilot production program which will be looking to work out whether the wells can produce gas at commercially acceptable flow rates over an extended period of time.

If the production testing is unable to prove commercial flow rates then there is the possibility that the gas project is considered stranded.

The second major risk is with respect to objective #3 in our Investment Memo.

Green hydrogen projects are still considered frontier tech in the energy industry, a lot of different companies are trying to get these projects off the ground but the commercial case for a lot of these is not yet clear.

EXR may run into roadblocks while trying to build the commercial case for its project which may mean the hydrogen project is also considered stranded.

The third major risk is with respect to the location of EXR’s projects.

6. What is our investment plan 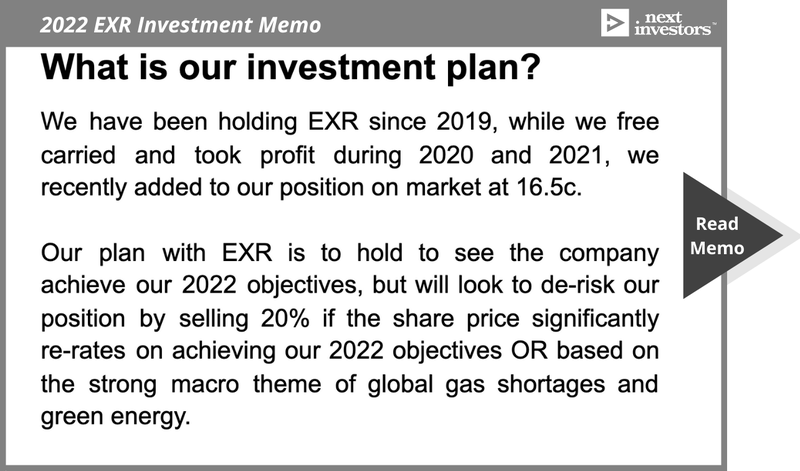 As long term investors, we are looking to see a significant share price re-rate in the lead up to first production in a bull market for natural gas, combined with progress on the green hydrogen front.

Our investment in EXR has performed very well so far and we already have a free carried position. During 2022 we may look to take some further profit (sell 20% of total position) if the share price re-rates back near its highs off the back of EXR delivering on our desired investment memo objectives.

So that wraps up our summary of what we want to see from our investment in EXR during 2022.

Let’s now take a very quick look back at what EXR achieved in 2021:

What did EXR achieve at its gas project in 2021?

Having spent around 300 days drilling, EXR was awarded the 2021 Investor of the Year by Mongolia's Minister of Mining and Heavy Industry. This was the second straight year that EXR has taken out the award as it continues to build on its already healthy relationship with the Mongolian government. 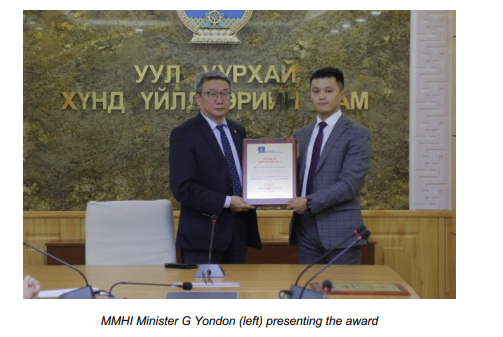 The ultimate aim for 2021 was to drill a bunch of stratigraphic drill holes to get a better understanding of the geology over EXR’s sizable landholding and to get some 2D seismic surveys done so that targets could be followed up with drilling. 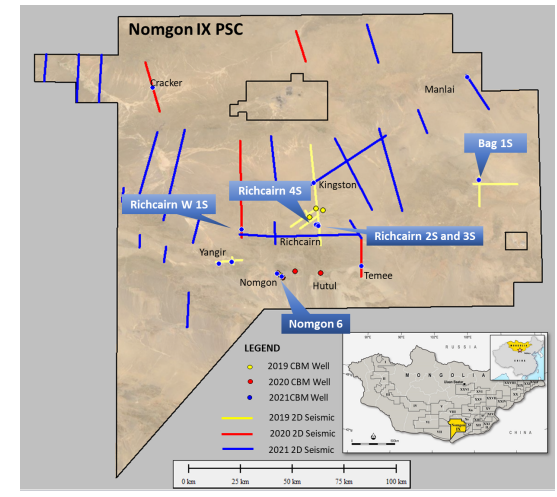 Having worked steadily through the gears in 2021, EXR is primed to achieve maiden gas production from its pilot production program by around the middle of this year.

Our key takeaways from the 2021 exploration program were as follows:

The production data showed early flows of gas to surface and high water flow rates of 280 barrels of water per day — both factors that are support a coal bed methane style project.

While we weren't expecting material gas flows from this program, the learnings from the program will be applied in the upcoming, and more important, 2022 pilot production program.

Completing the acquisition of a second phase 2D seismic program for the year. In total 528 kilometres of 2D was acquired.

EXR has been shooting seismic and drilling as it goes so we expect to see any interesting results that come through get announced to the market.

We expect the results from this to form the planned 2022 drilling program.

EXR is planning a two well pilot production program, permitting was lodged for this as part of its 2022 annual expenditure budget.

Strong balance sheet and ready to deliver key milestones in 2022:

One part of the EXR story we think is underappreciated by the market is the strength of the company’s balance sheet.

With market volatility rearing its ugly head in early 2022 with geopolitical tensions escalating, one thing that ASX juniors struggle with is raising capital. This is where the companies who have raised cash during the “good times” can shine with their resilience.

The last thing a company needs is to HAVE to raise capital in times where investors are thinking about which stocks to sell let alone thinking about handing them over to company’s in capital raises.

EXR at the 31st of December 2021 had $28.4M in cash and in the quarterly mentioned they are funded for at least another 11 quarters.

This means that at the current operating cash burn, EXR can go without raising capital for almost another 3 years.

With no immediate risk of dilutionary capital raises and 3 years to deliver on key milestones we feel comfortable backing EXR as it works towards its gas and hydrogen ambitions.

Below is our 2022 investment memo for EXR including: