Today, KNI announced that it completed its expanded 11 diamond drillhole campaign - hitting visible cobalt in 7 out of the 8 holes at their highest priority target.

One of the additional drillholes hit visible cobalt 280m along strike to the north of the high priority targets.

7 out of 8 is a great hit rate in our book, and we think today’s news vindicated KNI’s decision to expand drilling at their Norwegian cobalt project from the seven holes originally planned - given three of the four additional drill holes hit visible cobalt.

What we know so far is that KNI has defined a mineralized zone open to depth and along strike to the north.

We’re now eagerly awaiting assay results which should be available in late September - at which point we should have a better grip on whether KNI has made an economic cobalt discovery.

KNI’s unique position INSIDE the European Union in Norway means KNI’s project is on the doorstep of some of the world’s largest automakers.

With almost all of the major European automakers committed to electrifying their car fleets, we think a new cobalt discovery should garner some serious domestic interest.

This is why discovering cobalt in Europe really matters right now:

So that’s the macro picture for KNI in a nutshell - let's dive into how KNI is progressing with trying to find cobalt in the EU.

KIN’s three drill targets from this 11 drillhole campaign came together after the company applied modern geophysics and geochemical exploration techniques across its Norwegian cobalt project.

These three targets sat around the workings of a historic cobalt mine that produced over 1 million tonnes of cobalt ore, making it the largest operational mine of its time.

You can see the three targets on the map below - dont ask us to pronounce them:

The expansion of the drilling program came after KNI kept intercepting visible cobalt mineralisation hole after hole, so KNI added four drillholes to the exploration program.

Today, we saw what this additional visible cobalt mineralisation looks like: 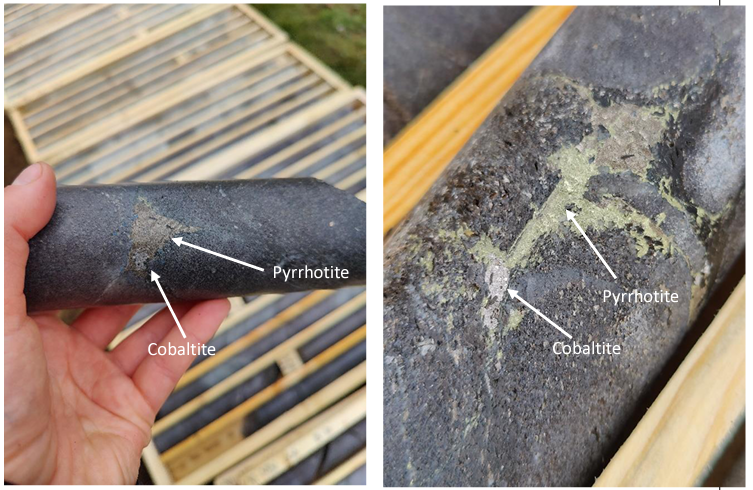 And with drilling now complete, we are again watching closely to see what comes of the assay results and whether or not all of these visible cobalt intercepts could eventually translate into a new economic discovery.

As we do with all of our exploration Investments, we have set some expectations for the drilling results. These will be used as a benchmark to evaluate how KNI did with this drilling program.

Our expectations in its most simple format are as follows:

Visible mineralisation is generally a good sign of a company hitting some high grade intercepts, but we are conscious of just how rare it is to make new cobalt discoveries.

We set this current drilling program as key objective #2 of our 2022 KNI Investment Memo.

Below is an excerpt of all the key objectives we set for what we wanted to see KNI achieve in 2022. Click on the image to view our full Investment Memo. 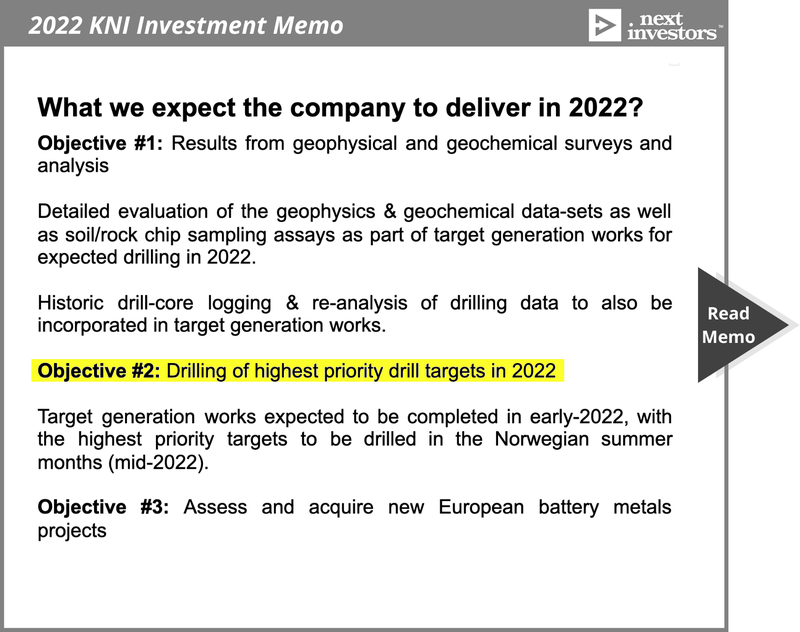 What do we want to see next from the drilling program?

Drilling is now complete, and KNI expects the first batch of assay results to start coming in “late September”.

Our expectations for the assay results are re-stated below.

🎓 = To learn more about how we go about setting our expectations for drilling events, check out our educational article here.

When first setting up our expectations, we mentioned that an exceptional result for KNI would be if the company identified several zones of cobalt mineralisation, and then backed that up with cobalt grades measuring 0.5-1%.

We also mentioned that an incredible case would be if those assays returned grades above 1% cobalt.

After today’s announcement, we know the following:

This means that KNI has already satisfied the first part of our “bullish case” expectation to identify several zones of cobalt mineralisation.

All that is left is for KNI to deliver high grade cobalt assays, which we hope to see in late September.

Our base case for the drilling program is simply for KNI to make at least one mineralised intersection and for the assays to return cobalt grading above 0.5%.

As mentioned above, we know for sure that KNI has already made one mineralised intercept.

For KNI to achieve our base case expectation, we just need it to deliver an assay grading above 0.5% cobalt.

The worst case scenario here would be that the EM anomalies represent no mineralisation of significance, and there is no information that warrants follow up exploration across these high priority targets.

We are mindful of assay results not yet being received. The assays may return grades considered “uneconomic”, in which case KNI would have to re-enter its project and continue drilling in order to be able to declare an economic discovery.

KNI had $4.9M in cash at the end of the March quarter. During the June quarter KNI raised $8M via a placement and ~$533k via a share purchase plan.

Before accounting for the company’s expenditures during the June quarter, we estimate KNI should have ~$13.4M in cash.

Even taking into account the expenses of this quarter, KNI should have more than enough to go back and drill out its cobalt project, whilst concurrently progressing exploration programs across its various other copper, nickel and lithium projects.

KNI put together its drilling targets after applying modern geophysics/geochemical works to a project area that was historically one of the biggest cobalt mines in the world.

We did a deep dive on these three key targets in a previous note which you can check out here: More on the cobalt targets KNI is drilling. 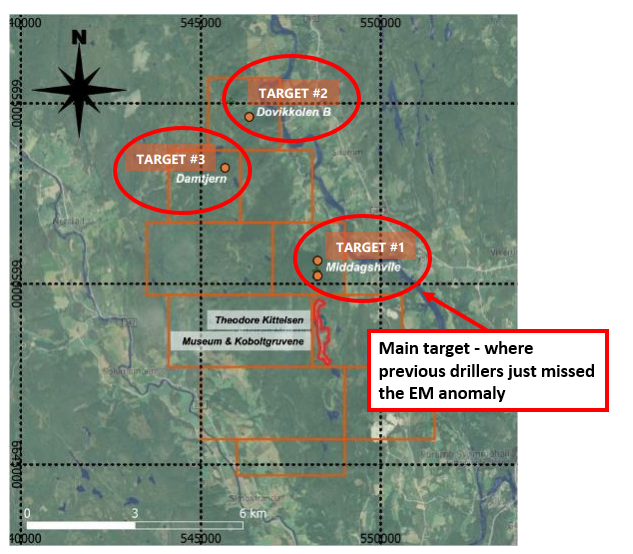 Below is our 2022 Investment Memo for KNI, where you can find a short, high level summary of our reasons for investing.