Almost 18 months after we Initiated Coverage, we finally have the drill results we were waiting for.

A few weeks ago, our exploration Investment BPM Minerals (ASX:BPM) put out the much anticipated drilling results from its lead-zinc project next door to Rumble Resources which is capped at $137M.

While BPM did manage to confirm traces of lead-zinc mineralisation, the grades were not high enough for the company to commit publicly to another drilling program.

Since the results were announced we have spoken to the senior management at BPM and it is possible that they have another crack at lead-zinc discovery (with plenty of other targets it could test in the Earaheedy Basin) - but we won’t know BPM’s plan is until it makes an announcement.

With a strong cash balance, the company can now turn attention to its two gold projects (an unloved sector that we think will rally in 2023), and like most micro-cap explorers whose main projects didn't deliver a new discovery, BPM may go looking for a new core asset to acquire.

Given the tight capital structure and reasonable cash balance, a newly acquired project could see BPM re-rate, depending on what a new acquisition might look like.

We still hold 1,670,000 BPM shares (we are the second largest holder) and we think that BPM’s most interesting project is the Claw Gold Project because:

More on this later, but first, our thoughts on the long awaited lead-zinc drill results...

We liked this project because it sits along strike from Rumble Resources and because it was pegged BEFORE Rumble made its discovery in April 2021.

After making its discovery Rumble went from a share price of 10c to 80c and was trading with a market cap of ~$425M.

BPM was capped at only ~$7M at the time and so we Invested in BPM hoping it could do the same by making a similar style discovery.

This was BPM’s first ever drilling program here and while we hoped it would make a discovery, this was not our base case expectation.

What we generally look for with any first pass drilling program is to see our Investments take on learnings and get a better understanding of the ground its projects sit on before committing larger amounts of capital to where they then identify the most interesting parts of the project.

Of course, a rare, fully fledged discovery is the best possible result, but we set our expectations so that in the unlikely event that a discovery is made then it is a completely unexpected surprise to us and an overachievement relative to our pre-drilling expectations.

As a result we had set up our expectations for BPM’s drill results as follows: 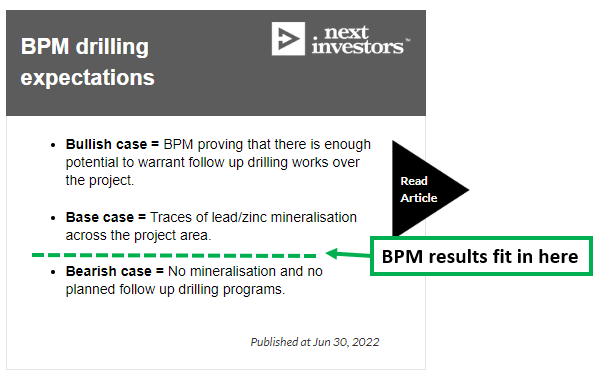 🎓 = To learn more about how we go about setting our expectations for drilling events check out our educational article here.

BPM’s results came in between our bearish and base case expectations because the company:

With an enterprise value this low, the company has more drilling targets and is progressing some of its other projects as follows:

We will be watching to see which project BPM allocates capital to, given the decent amount of cash it has on hand.

This brings us to our “Big Bet” for BPM:

BPM will return 10x by making a discovery and defining a deposit significant enough to move into development studies.

NOTE: our “Big Bet” is what we HOPE the ultimate success scenario looks like for this particular Investment over the long term (3+ years). There is a lot of work to be done, many risks involved - just some of which we list in our BPM Investment memo. Success will require a significant amount of luck. There is no guarantee that our Big Bet will ever come true.

To monitor the progress BPM has made since we first Invested and how the company is doing relative to our “Big Bet”, we maintain the following BPM “Progress Tracker”:

What’s next at the Hawkins lead-zinc project?

BPM drilled up in the northwest of the Hawkins permit following up on the historical lead-zinc prospect.

We mentioned in our previous note that this was the first ever drilling program over this ground focused on making a lead-zinc discovery and that our base case expectation was not for BPM to make a new discovery (read the article here).

Instead, we wanted to see the company find enough mineralisation to warrant follow-up drilling.

In that note we touched on how BPM wasn't focusing any of its drilling on the cluster of EM targets that sit on the eastern border of the project.

This is where we think BPM still has potential exploration upside at Hawkins beyond this most recent round of drilling. 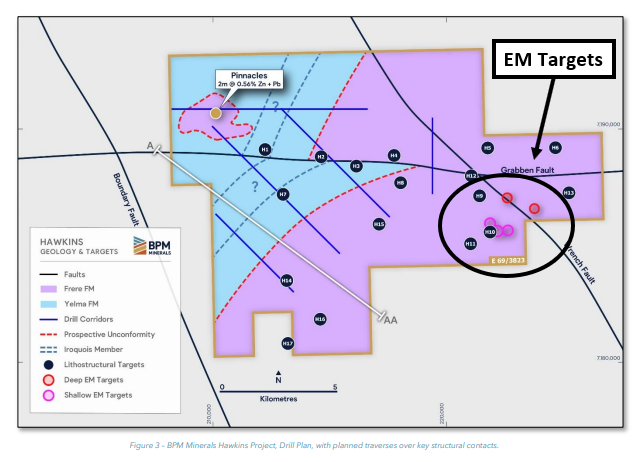 At this stage, BPM haven't made it clear whether or not they would drill here but we do note that it is an option should the company look to go back and drill at Hawkins.

We will be keeping an eye on newsflow regarding Hawkins and any guidance from the company with regards to any follow up exploration activities.

A look at BPM’s other projects

Whilst the main reason we Invested in BPM was the Hawkins lead-zinc project, we also note that the company has several other projects (side bets) progressing in the background.

With small cap exploration stocks, “side bets” can quickly become the “main bet” if an unexpected discovery is made.

For example, we Invested in Galileo Mining primarily for its nickel exploration in the Fraser Range, however Galileo ended up making a significant discovery at its Norseman project, which we considered a “side bet” pre-discovery.

The company’s share price significantly re-rated on the unexpected discovery, and the “main bet” quickly became defining the mineralisation at Norseman.

Almost all of the “company making” discoveries are made by junior explorers, and can often come from “side bet” projects like with Galileo. You can read more about why we like small cap exploration stocks here.

BPM has a number of other “side bets” as follows, starting with the one we are currently most interested in - the Claw Gold project.

The Claw Gold project covers a total ~134km2 with ~33km of prospective strike directly to the south of ASX-listed Capricorn Metals’ Mt Gibson Gold Mine in WA.

Capricorn Metals is capped at $1.4BN, and acquired the Mt Gibson Gold Mine for $39.6M in July 2021 (source). Since then, Capricorn has thrown even more capital at the project, with a further ~81,000m of new drilling.

Whilst the market doesn't seem to be too interested in BPM's Claw Project yet, we think a change in market sentiment towards gold and clarity around the drilling program could bring with it increased market interest.

Gold is currently unloved, and we have chosen it as one of our investment themes to watch for in 2023.

We think that bottom of the cycle gold explorers will fare well IF the commodity returns to favour in 2023.

BPM expects exploration works on this project to start in 2023 so we will be keeping an eye out for a more detailed program of work. 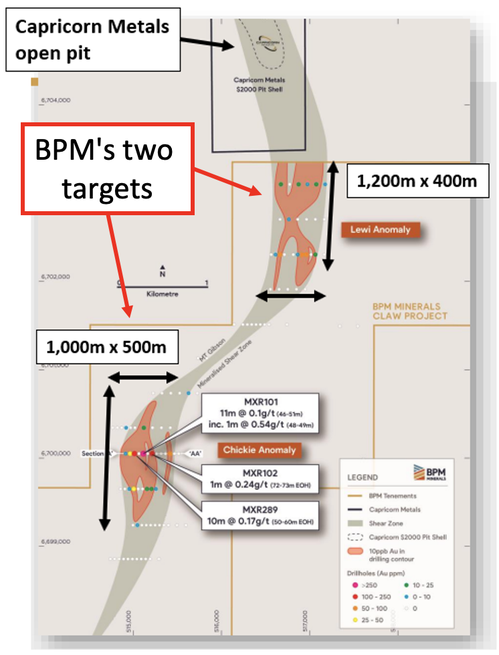 Capricorn Metals presented this year at the Diggers and Dealers conference, where the management team laid out a master plan for the Mt Gibson project and the areas surrounding it.

The company completed ~80,000m of drilling and then committed to over 20,000m more of drilling with a view of making a final investment decision on redeveloping the project by the end of the year.

Our view is that what’s good for Capricorn will be good for the look-through valuation of BPM’s ground.

You can see Capricorn Metals CEO talk about the Mt Gibson project in the video below, starting from 14:47.

The drilling program was based on previous rock chip sampling (which returned gold grades up to 100g/t) that identified a ~2.2km target area with ~17 different priority targets.

Assays from this project are expected to be announced soon.

Given that this was a side bet for us, we haven’t set any expectations for the drilling program, and will instead review the results once they are out to determine whether they change our BPM Investment Thesis significantly. 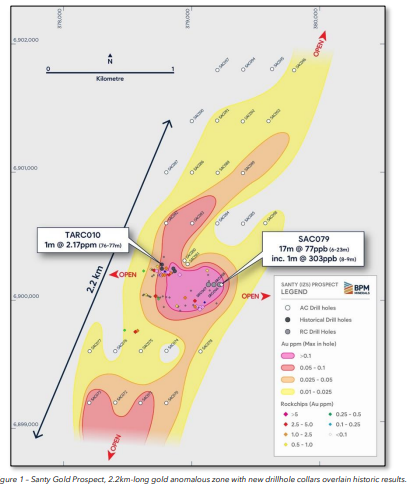 On this project, BPM recently drilled ~42 aircore holes but returned no results that were significant enough to note.

BPM still has a cluster of conductors to the west of its ground that the company has previously confirmed are interesting enough to warrant a follow-up drilling program with heavier drill rigs.

At this stage, we want to see BPM announce a forward plan at this project before considering the project's impact on our Investment Thesis.

What’s next for BPM?

With drilling completed at the Hawkins project, the main thing we want to see BPM do in the short term is to detail whether or not the company will go back and drill Hawkins again.

At its Claw project, BPM recently confirmed an exploration program had been designed and that work was expected to commence in early 2023.

We note that assays from the Santy gold project are due this quarter, but the results won't have any impact on our Investment Thesis for BPM unless of course there is a material discovery made.

At that valuation, any unexpected good news should be enough to get the market interested in the company.

Below is our BPM Investment Memo, where you can find the following: