Disclosure: S3 Consortium Pty Ltd (the Company) and Associated Entities own 11,785,000 88E shares at the time of publishing this article. The Company has been engaged by 88E to share our commentary on the progress of our Investment in 88E over time.

It’s getting to that time of the year again...

The optimal location for a well has been selected.

The drill rig has been contracted. Permitting and planning is on track.

All long lead items have been secured and tendering is nearly complete.

This upcoming well has been de-risked by recent drilling and flow tests by 88E’s A$1.2BN capped neighbour to the north.

88E’s well is scheduled for spudding in late February / early March 2023 - that’s as early as 8 weeks away.

88E will be targeting the same reservoir units where its neighbour has had three successful wells in recent years - driving that company from a $60M to just under $2BN market cap at its peak.

Every year 88E drills an exploration well targeting a large binary outcome — a successful discovery has the potential to see the company’s share price increase by multiples.

However it's always risky, and while 88E has had some preliminary exploration successes, it has not been able to declare a fully fledged new oil discovery in Alaska - yet.

The closest 88E has come to a discovery was with its Merlin-1 well in 2021, which saw the share price run up over 1,000% pre-result when things were looking positive...

But ultimately 88E couldn’t get that final step of bringing a hydrocarbon sample to surface to declare a discovery, and the share price has come off since.This is why it’s important for us as Investors to have a de-risking strategy in place when investing in oil & gas exploration.

88E will be doing their yearly “rolling of the oil & gas exploration dice” in the first quarter of 2023.

88E held A$17.5M cash at 30 September. Whilst this is a solid amount, the company has not yet released a cost estimate or announced a farm-in partner to share the financing (and success) of the well.

We do know that 88E’s share of well costs is going to be 75% - which is the company’s working interest on this part of its acreage.

Exactly how 88E intends to fund its 75% share of this imminent well is one of the biggest final pieces of the puzzle ahead of drilling - we will be watching for news on this.

Given the work 88E’s neighbour has done to de-risk the ground, we think this could be considered 88E’s lowest risk well to date.

But of course, all exploration drilling is risky.

It’s time we checked in with 88E... while it's still all pretty quiet ahead of its upcoming big drilling event.

The biggest oil discovery in US history was made in the North Slope of Alaska - Prudhoe Bay, which has historical oil reserves of ~25 billion barrels.

Naturally, after a discovery of that magnitude, the North Slope became some of the hottest ground in the world for juniors chasing oil & gas exploration success and a material re-rate in their share prices.

Over the decades, hundreds of millions of oil discoveries have been made.

Another company that’s made the most of oil and gas exploration opportunities on the North Slope is UK-listed Pantheon Resources, currently capped at A$1.15BN.

Pantheon is 88E’s neighbour on the slope, and is spending a lot of cash proving up the reservoirs in and around 88E’s ground.

Pantheon has drilled three successful vertical wells and is currently in the middle of its first horizontal well targeting a commercially viable flow rate.

Since drilling its first well in 2019, Pantheon’s market cap has gone from ~$60M to a peak of just under $2BN.

Our oil & gas exploration Investment 88E has also been chasing this style of success in the North Slope of Alaska for many years.

88E is soon to drill its latest well in this region — the Hickory-1 well — targeting a 647 million barrel unrisked prospective resource (net to 88E), which is right next door to Pantheon.

88E has already signed a rig contract agreement and expects to be drilling in Q1 2023, which means a major potential share price catalyst for 88E is due in 8-12 weeks. 88E’s Hickory-1 well will be targeting the same reservoir systems where Pantheon Resources has had success over the last three years — the same reservoir units responsible for that company’s re-rate from $60M to a peak of just under $2BN.

These reservoir units have been independently assessed to extend into 88E’s ground to the south of Pantheon. 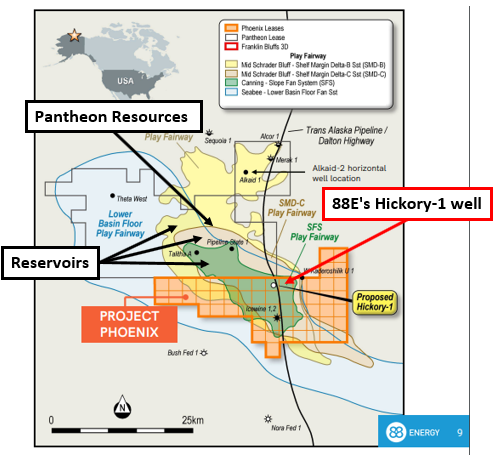 What’s particularly relevant to 88E is the comments from Pantheon’s technical director Bob Rosenthal who thinks Pantheon is “now on the path to unlocking an enormous basin play”, implying that the company sees basin style potential across these reservoir units.

We think that 88E can insert itself into the conversation of the potential “basin wide play” IF it can deliver a successful drill program with its Hickory-1 well.

If 88E can prove that the same reservoir structures Pantheon is working with extend into its ground, we think 88E then becomes a player of interest in a larger “basin wide play” development.

With 88E set to drill by late February / early March, we’ll be watching to see if 88E’s share price follows the typical oil and gas explorer arc that we have written about in the past.

The process for oil & gas exploration stocks preparing to drill large targets is as follows:

Since drilling its last well in Q1 2022, 88E has gone through stage one - seeing its share price fall and then find support around 1c per share.

Then in August the company raised $14.9M at 0.9c per share and signed a rig contract. We increased our position in 88E in this capital raise.

We think 88E is now on the cusp of transitioning from stage two to three as we approach the drilling date in late February / early March 2023. 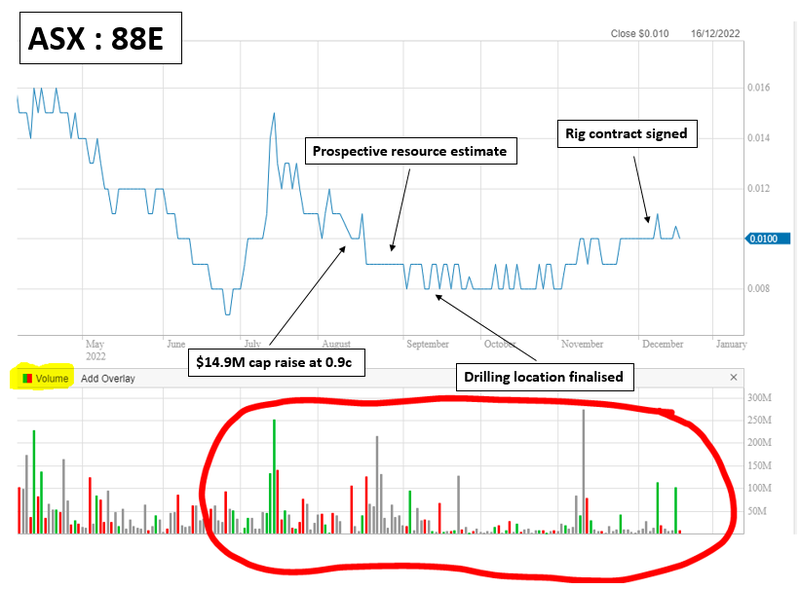 In the coming weeks ahead of drilling, we expect to get more clarity on how much this well will cost to drill, how much cash 88E has on hand at the year end, and how 88E intends to fund the drilling of the well - going it alone or bringing on a farm-in partner.

As usual, we will look to implement our standard investment strategy for this style of exploration program. We will look for an opportunity to Free Carry our position leading up to the start of the drilling program and the announcement of results... if the share price increases.

Ultimately, we aim to hold a large enough position so that should 88E make a discovery we can generate a significant return within our broader Portfolio.

We have been Invested in 88E for almost three years now (as part of our Next Investors Portfolio, we had invested in 88E prior to this too) and we hope that it's Hickory-1 well delivers a big exploration win in 2023, which would go a long way to achieving our long-term ‘Big Bet’ for 88E:

NOTE: our “Big Bet” is what we HOPE the ultimate success scenario looks like for this particular Investment over the long term (3+ years). There is a lot of work to be done, many risks involved - just some of which we list in our 88E Investment memo. Success will require a significant amount of luck. There is no guarantee that our Big Bet will ever come true.

To monitor 88E’s progress since we first Invested and how the company is performing relative to our “Big Bet”, we maintain the following 88E Progress Tracker:

While 88E’s share price has been trading sideways over the last ~9 months, the company has been working on maturing its 2023 drilling program.

88E has so far completed the following:

✅ Acquired 3D seismic data - An independent review of the 3D seismic data acquired by 88E indicated that the reservoir units that Pantheon is currently flow testing extend into 88E’s ground. 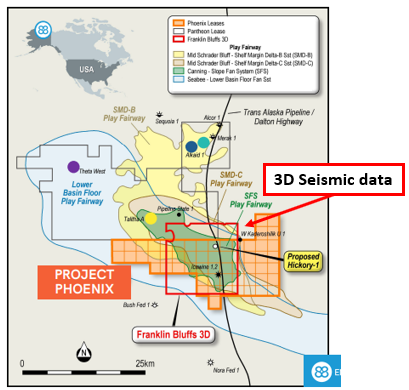 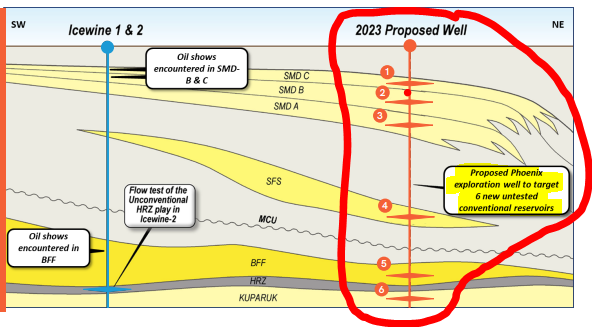 Drilling is scheduled to begin in late February / early March 2023.

Here's a quick summary of Pantheon’s trifecta of successful wells:

The difference in market cap between 88E and Pantheon Resources is also impacted by the more than US$300M spent on Pantheon’s projects to get it into a position where it has an independently verified 17.8 billion barrels of oil in place.

Click here to see our Quick Take on that news.

What is Pantheon up to now?

Pantheon’s latest well is its horizontal Alkaid #2 well, where it is ultimately looking to get a commercially viable flow test.

Pantheon's aim is to become an oil producer by October 2023.

Positive results from this program should increase the look-through valuation of 88E’s ground, given it sits on top of the same reservoir units as Pantheon’s project.

For that reason we are closely tracking Pantheon’s activities and will be sure to cover any news relevant to 88E. 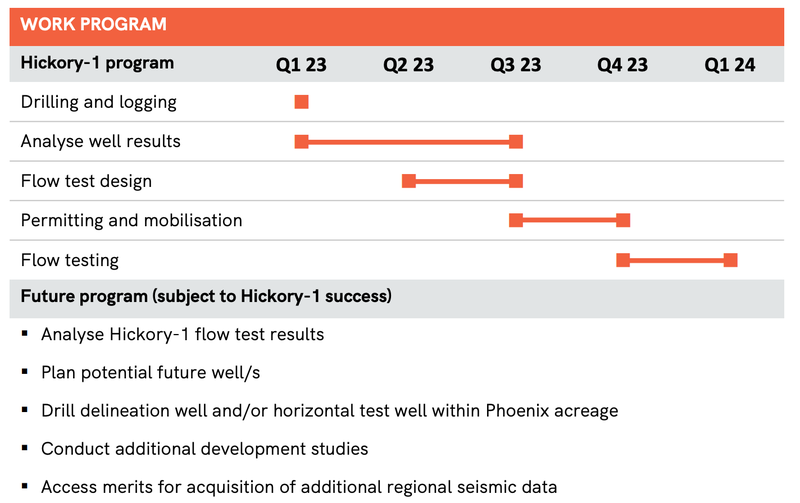 At this stage we are unsure how much drilling costs will be for Hickory-1 well but, as above, we recognise that the company may need to raise more capital either through debt, equity or a farm-in agreement.

Our preference when it comes to high-risk high-reward binary oil and gas drilling events is that if they require further capital our Portfolio companies either 1) raise equity or 2) bring in a farm-in partner who brings not only cash but also some technical knowledge and experience.

While our base case expectation is for 88E to raise capital via an equity raise, the positive sentiment around energy projects in OECD jurisdictions may mean 88E can bring on a partner on favourable terms to shareholders.

88E has also hinted at this in previous presentations: 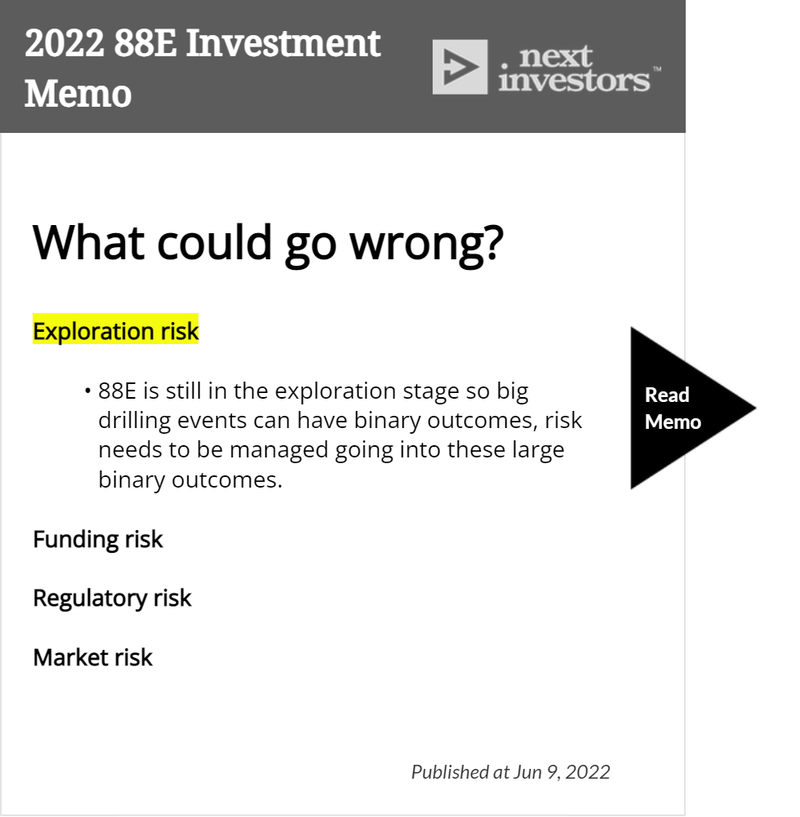 The ultimate purpose of our Investment Memo is to record our current thinking as a benchmark to assess the company's performance against our expectations 12 months from now.