What does FOD do?

The Food Revolution Group (ASX:FOD) is a beverage manufacturing company that specialises in premium fruit juices and probiotic wellness shots. It owns established beverage brands ‘Juice Labs’ and ‘Original Black Label’ and its products are available in major supermarkets Coles and Woolworths generating revenue for the company.

Why did we invest in FOD?

After launching two new beverage products in 2021 (carbonated cans and probiotic wellness shots), we want to see whether consumers are buying these new products and whether those sales translate into meaningful revenues for the company.

Currently distributing through Coles and Woolworths, with very little marketing spend, we think that there is a large scope to grow revenues through marketing and distribution which was not a focus for FOD in 2021.

In 2021 FOD became EBITDA positive. We are watching the turnaround story play out and want to see if the company can string together a number of strong quarters of growth and financial performance to establish itself as a strong candidate for institutional investors.

Turnarounds can take time, and are ideal for patient investors. We want to give FOD multiple years to see its Fix → Reset → Growth strategy play out.

For FOD we want to see multiple quarters of positive EBITDA and operating cash flow positive. We want to see the debt drawdown and will be disappointed if the company raises capital to fund its current operations.

We want to see sales growth for the new products launched in 2021 (carbonated cans, probiotic wellness shots and apple juice) and increase distribution channels for these products.

We want new products developed and on shelves for customers to enjoy. New products, that are successful should improve FOD’s ability to generate cash and improve its business.

FOD has $5.9M of debt, and although its debt was refinanced to NAB (tier 1 bank) in 2021, debt repayments can hamper the growth of the company – as cash flow that could be re-directed towards growth goes into paying off the debit facility.

The FMCG space is very competitive and there is no assurance that FOD’s products will resonate with consumers once the demand from the ‘new product launch’ subsides.

As FOD’s only distribution channels, if Coles and Woolworths decide not to stock FOD’s products, it will impact the company’s ability to make sales.

We originally invested in FOD at 3.5c because we believed the stock was on the cusp of a turnaround and believed FOD’s processing facility, brand value and current distribution network alone is worth multiples of the current market cap.

With the stock trading below 2c and well below our entry price, we will continue to hold our full position during 2022 in the expectation of a share price re-rate on the company achieving objectives #1, #2 and #3.

Our Past Commentary on The Food Revolution Group

FOD signs deal with Costco and expands distribution with Woolies

In addition to the Costco deal, Woolworths has agreed to increase distribution of the Juice Labs Wellness Shots - highlighting the success of the product amongst consumers.

The Shots are also being exported to Asian markets through distribution partner, Easychef.

According to CEO Steven Cail “increasing distribution remains a key pillar of the strategy in FY23”.

We think that FOD’s domestic distribution and new product strategy will position the company well for FY23 with the exciting ‘blue sky’ potential for export into key Asian markets the key catalyst for business expansion and growth.

In a big update today The Food Revolution Group (ASX:FOD) announced that it has launched two new products:

These new products will be ranged nationally in Woolworths and available to purchase from early July. 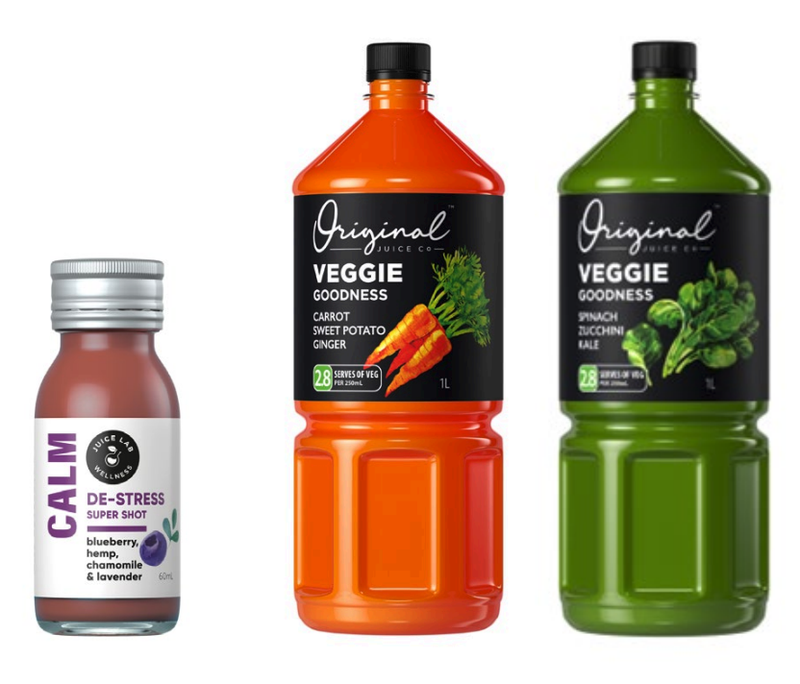 The new Veggie Goodness products continue FOD’s momentum of new product releases over the last 12-18 months, with Plant Based Smoothies, Carbonated Wellness Cans and Juice Shots all released within that time frame.

This has put FOD in a strong position to increase its market share and target consumers beyond orange juice.

Seeing a new product extension like the “Calm” shot is always a good sign, as it is indicative that the products are resonating with consumers.

We look forward to seeing how these new product developments will translate into increased product distribution and increased sales for the company.

Late last week we saw one of FOD’s biggest shareholders ‘Batman Investments’ whose principal is Geelong based businessman Vasilios Votsaris.

With the share price recently touching its 52 week low at 1.7c the strong buying from a major shareholder is another indicator to us that the company is starting to build a base around these levels.

Votsaris’ purchasing seems to have started on 31 January this year and ended on 21 March with a total of $178k purchased at an average share price of 21c. 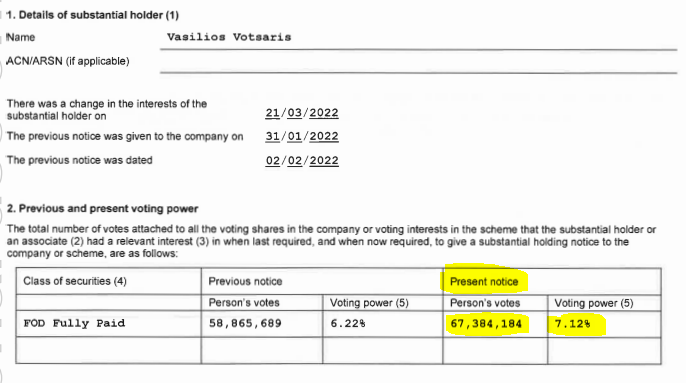 In our 2022 Investment Memo we listed the turnaround potential for the company as a key reason we continue to hold FOD in 2022.

We see the buying on market by a major shareholder as a vote of confidence in the turnaround strategy and look forward to FOD’s progress on this front this year. The market also seems to like the buying from last week with the share price trading at 2.6c, up 13% today alone.

To see all of the reasons we continue to hold FOD, what we want to see the company achieve in 2022 and the key risks to our investment thesis check out our 2022 FOD Investment Memo here.

We noticed something new at our local Coles this week, FOD’s plant based protein smoothies had hit the shelves.

We bought both, and our key takeaway (from flavour point of view) is that these things are filling - essentially an entire breakfast / lunch replacement.

Banana was our favourite, but we did like the Raspberry & Chocolate one too.

If you’re invested in FOD, go down and try one for yourself and let us know what you think.

We are keeping an eye out for early sales/market share data from this new product, and how it will help improve FOD’s overall sales and financial performance.