YPB to Generate First Revenues for its Breakthrough Anti-Counterfeit Technology

This is a major step forward for the company and comes just days after it made a major technical breakthrough in the development of its Motif Micro technology.

In a world-first technical achievement, YPB achieved smartphone readability of a high security authentication mark under “real world” conditions — a breakthrough that set YPB up for commercial launch of its smartphone authentication solution in H2 2019.

The agreement with PanPass Inc. is YPB’s first commercial client for its MM1 authentication solution, delivering a substantial boost to the group’s addressable market.

PanPass prints approximately 15 billion security documents annually which includes in the order of three billion product security labels per annum, predominantly with “QR” codes to its customers in China.

PanPass initially intends to use YPB’s solution to protect its own product security QR codes from counterfeit.

I will get to the finer details of the deal shortly, but first let’s have a quick review of why I believe YPB is worth a look as an investment. 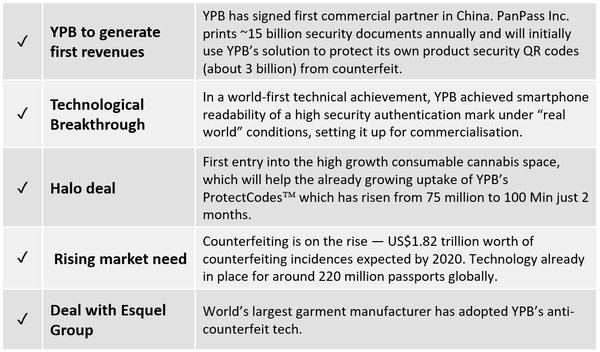 Whilst it has been busy signing deals with the likes of Halo and Esquel, a main focus for YPB Group (ASX:YPB) has been final testing of its Motif Micro (MM1) technology.

The breakthrough set it up for the commercial launch of its smartphone authentication solution in H2 2019.

For those of you new to the story, Motif Micro is a multi-patented, high security, invisible to the eye smartphone readable anti-counterfeit technology. It acts as an embedded covert tracer for YPB’s ProtectCode product – the company’s highest security anti-counterfeit product.

Commercial launch of the MMI technology is expected to open up mass consumer goods markets to YPB, who will be able to offer brands direct consumer engagement powered by assured product authentication.

It has been made possible through the combination of YPB’s next generation rare earth tracer material, Motif Micro1, and the ProtectCode smartphone app.

Readability issues that held up the first iteration of the technology have now been eradicated, including, most importantly, the requirement of a smartphone to be held flat against the surface being scanned to exclude extraneous light.

YPB’s ability to sell ProtectCodes is now no longer limited.

The following demonstration shows the new MM1 iteration in action:

You can read an in-depth take on the advantages of MM1 technology in this Finfeed article: 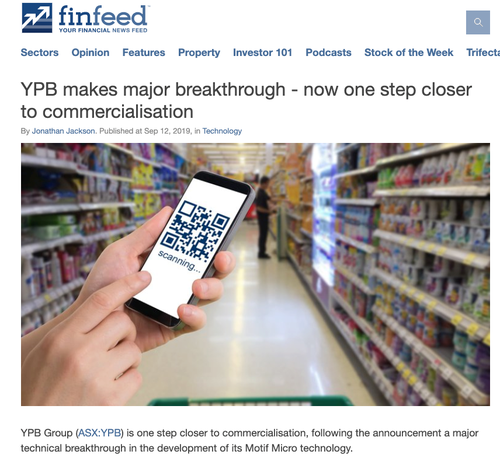 Here is a list of advances the company has made:

‘’It greatly expands our addressable market by shifting from our historical B2B (business to business) sales to a B2C (business to consumer) marketing sales.

“YPB’s technology will provide brands with a direct, personal, low-cost channel to a willingly engaged consumer which can be extremely valuable to brands, and this is reflected in discussions between ourselves, our channel partners and brands.

‘’Increasingly, we will be selling engagement powered by authentication with much higher probability of sales success compared with our earlier anti-counterfeit offer.”

The fruits of YPB’s technological advancement is already paying off with today’s announcement that it has signed its first commercial partner in China.

The supply agreement with PanPass Inc., is the first commercial adoption of YPB’s MM1 solution and delivers YPB a substantial boost to the group’s addressable market.

PanPass will use YPB’s solution to protect its own product security QR codes from counterfeit, to counter the growing number of fake QR codes pervading the country.

This is becoming an enormous problem for China:

As the above article states: “In Guangdong province, about 90 million yuan (US$13 million) has reportedly been stolen via QR code scams”.

Deputy Liu Qingfeng, chairman of voice recognition cloud service provider iFlytek, said, “Currently, over 23 per cent of Trojans and viruses are transmitted via QR codes. The [difficulty] threshold to make QR codes is so low that fraudsters could implant Trojans and viruses into a QR code very easily.

“On the other hand, consumers cannot verify the authenticity of QR codes by eye and are therefore prone to be deceived if criminals paste their fake code over the original one.”

QR codes are omnipresent in China but are easily copied and substituted with consequences from fake product substitution to identity theft, bank account fraud and malware intrusion.

YPB’s MM1 is expected to mitigate this problem and PanPass will be the first to see just how well this anti-counterfeit technology works.

Under the supply agreement, PanPass has agreed to use YPB’s solution to protect its security labels for a six-month initial program.

If successful, this could lead to a further minimum two year licence agreement either at the end of the initial program or at PanPass’ request including an upfront license fee, a supply fee and a minimum order quantity.

It is not possible to determine the likely annual revenues from the contract at this stage, however PanPass’ reach underlines just how important this agreement is to YPB.

Pan Pass was established in 1996. It has six service centres and 48 branches in China and is that country’s largest product data identity management service provider, with a market share that exceeds the total of the second to fourth companies combined.

This agreement with PanPass is itself a breakthrough for YPB, as it looks to further cement its position internationally as an authentication solutions provider of choice.

It has been a tremendously busy few weeks for YPB.

Firstly, it signed a new three-year Master Services Agreement (MSA) with leading Indonesian pharmaceutical and wellness company PT Combiphar, which you can read about in our previous article: YPB Secures Vital Pharma Contract: Expects Circa $1M in Revenue.

Then it delivered smartphone readability of high integrity authentication marks.

“I’m extremely proud of this tremendous leap achieved by our technical team led by Dr Paul Bisso. For years, I’ve described smartphone readability of a high security authentication mark as the Holy Grail of anti-counterfeit as it potentially arms vast numbers of consumers to become product authenticators. It can be deployed immediately and comprehensively at negligible cost via the ubiquity of smartphones,” YPB Group CEO John Houston said.

Today’s announcement that YPB has signed its first commercial partner in China (no less), continues the momentum and opens up significant markets.

This development builds on the recent strong news flow above that has seen the company’s share price rise 50% in September.

Given this agreement’s potential to materially impact revenues, further share price upside may be imminent.

YPB Confirm Another Sale on the Back of Recent Tech Breakthrough