Disclosure: S3 Consortium Pty Ltd (the Company) and Associated Entities own 4,802,500 SGA shares and 1,466,250 SGA options, the Company’s staff own 50,000 SGA shares and 12,500 options at the time of publishing this article. The Company has been engaged by SGA to share our commentary on the progress of our Investment in SGA over time.

Not all graphite is equal.

Different types of graphite have different applications in different industries.

The fastest growing forecast market for graphite is in batteries - for electric cars and electricity storage for energy independence.

This is just for the specific type of graphite used in battery anodes, which attracts a premium price.

Today SGA announced progress on its ongoing metallurgical work (“metwork”) - which is assessing the type of graphite it has AND identifying the process to extract and refine it.

Along with that, it means that the type of graphite required for battery anodes is attracting a premium price.

This note will dive a bit deeper into today’s SGA announcement, and explain what it all means.

SGA is currently capped at $38M.

Other companies that have adopted the same battery anode strategy but have already developed an effective refinement process via metwork AND are at feasibility studies stage, are Talga ($320M) and Renascor ($410M).

We are watching for SGA's next phase of metwork to unlock a scalable refinement process needed to achieve a high 90s percent purity, then moves to feasibility studies and achieves a similar market cap to its peers.

SGA’s further metwork testing is ongoing and feasibility studies are expected to commence within six months.

The battery anode market requires ultra fine flakes, at a micro-crystalline sizing, which attract a premium product price in excess of $3,000/t — more than double what coarse flake graphite can command.

Battery grade graphite needs to be at 99.95% purity before it enters final processing to be used in a battery anode (called “spheroidisation”).

The final refining step to get to 99.95% is usually done by the graphite purchaser who runs the spheroidisation process, who can accept graphite purity of a percentage in the high 90s.

So the key thing we are watching for next is a further update on SGA’s metwork to achieve closer to the historically refined purity of 98.6% or more,

AND specifically whether the processing required to get to this high 90’s percentage can be achieved using a scalable and economic process.

If successful, our rough calc with some assumptions, shows that SGA could potentially contribute a significant chunk of the forecast battery anode graphite demand from a single mine. 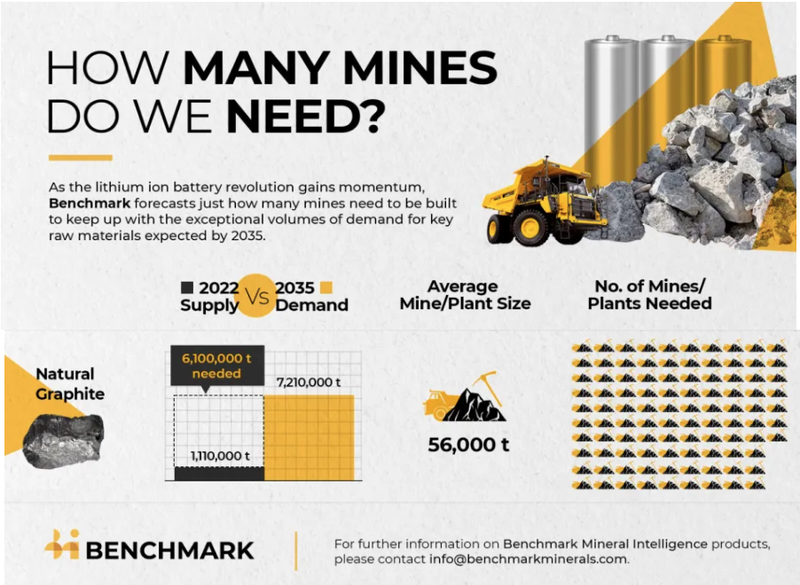 Source: Benchmark Intelligence (image edited to include only graphite demand)

SGA decided on its product strategy after producing micro-crystalline graphite in its recent phase 1 of metwork, as announced today, combined with the high price and demand outlook for battery anode graphite material.

SGA’s project location in Kazakhstan, squarely between major lithium-ion battery producers (potential SGA customers) in both China and Europe no doubt helps with this product strategy.

So in summary, SGA has a giant, high grade, graphite resource and is now targeting the high value battery grade graphite market. It has completed the first phase of metwork achieving 92.1% purity and now the second phase it hopes to get into the high 90’s percent purity.

“Given this graphite project’s strategic location in between China and Europe, we hope that if SGA proves out the size and economic extractability of the resource, it will generate interest from major mining companies, leading to a takeover of SGA for $1 billion+.”

NOTE: our “Big Bet” is what we HOPE the ultimate success scenario looks like for this particular Investment over the long term (3+ years). There is a lot of work to be done, many risks involved - just some of which we list in our SGA Investment Memo. Success will require a significant amount of luck. There is no guarantee that our Big Bet will ever come true.

Today's news is a good step in the direction of our Big Bet.

For our summary of SGA’s progress over time and how today’s announcement contributes to our Big Bet see our SGA Progress Tracker: 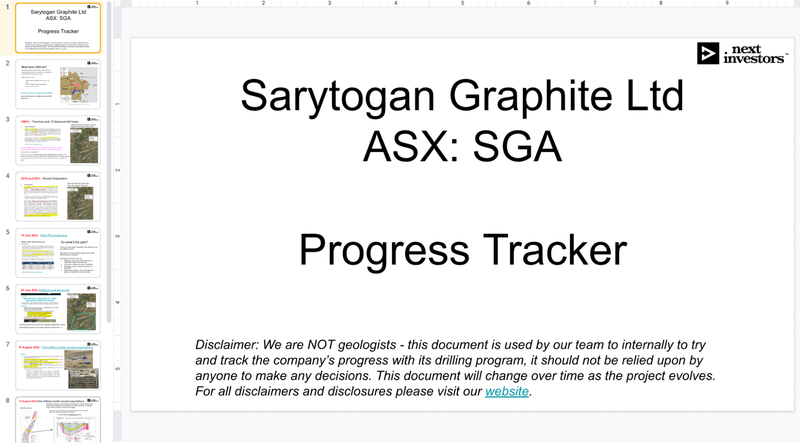 Even today, coarse flake graphite commands around US$1,200/t compared to fine flakes which are selling for around half of that at US$600/t.

However, this ignores ultra fine flake sizes, which are selling in excess of US$3,000/t.

These ultra fine flakes undergo a process of “spheroidization” to meet the specifications of the battery anode market — the single highest value graphite market.

Demand for natural graphite from the battery segment was 400,000 tonnes in 2021, but by 2030 that figure is expected to scale up to 3 million tonnes, according to Benchmark Mineral Intelligence.

To meet the coming global demand for battery anode materials, Benchmark estimates that 97 new 56,000/t per year natural flake graphite mines will need to be built.

If we assume that, say, around half of SGA’s contained graphite (60Mt) in its inferred JORC resource (209Mt) is extractable, it could potentially fill almost half of the forecast demand from a single large mining operation.

Important note: This does not account for the economics of actually mining the graphite, whether that’s the amount of ore extracted, processing, purity levels, capex, opex, among a range of other variables - it's a very rough calculation and should not be used to make any decisions.

But it does show you the sheer scale of SGA’s deposit.

Producing this micro-crystalline graphite has helped SGA shape its product strategy, where it sees itself as a future premium supplier of high-value spherical graphite products to the rapidly growing battery anode material market.

As we noted above, this is a strategy that is also being pursued by SGA’s ASX-listed graphite peers, Talga Resources (market cap of $360M) and Renascor Resources ($411M market cap).

SGA is currently capped at $38M.

Both Talga and Renascor projects are at more advanced stages having completed Definitive Feasibility Studies on their Measured and Indicated Mineral Resources.

Talga and Renascor are both working on a downstream value adding strategy, but it is too early to say if SGA will go down this route.

SGA, while at an earlier stage does, however, have a much larger graphite resource of 209Mt at a grade of 28.5% TGC (total graphite content) for 60Mt contained graphite. This makes it the highest grade graphite project and the second largest graphite project on the ASX.

What is Talga doing?

Talga has outlined a JORC Exploration Target of 170 - 200 million tonnes at 20 - 30% graphite to expand the proposed Vittangi mine’s scope. But as things currently stand, SGA has a larger, higher grade resource (209Mt at 28.5% TGC for 60Mt contained graphite).

The key point of difference between Talga and SGA is that SGA is at an earlier stage of development, and the company’s Mineral Resource is in Inferred category (see Objective #2 in SGA Investment Memo).

SGA’s goal is to catch up to Talga by quickly progressing its metwork, i.e be a “fast follower.”

That way they can then move into a Scoping Study phase.

Talga is trying to secure binding offtake terms after a long period of product qualification. It currently has non-binding offtake term sheet with Automotive Cells Company which is co-owned by Mercedes Benz, Stellantis, and battery company Saft, a subsidiary of TotalEnergies.

Talga is also aiming to be a vertically integrated graphite producer (value add products made in Sweden).

Talga’s strategy has been to prove out a large resource, complete a DFS and get its product in the hands of customers and secure offtake to help with financing.

SGA is aiming to replicate this strategy, although it may be far too early to talk about vertical integration.

Here’s some quick details on Renascor:

The main point of difference between SGA and Renascor is that the company is far more advanced with its battery anode strategy and its resource is at the “proved reserve” stage - some of the highest resource classification levels possible.

We think that as SGA progresses through developing its own strategy and upgrades the classification of its resource, its market cap will re-rate in line with (and we hope above) Renascor’s.

What’s Next for SGA?

Assays are pending from completed drill holes in the south of the Central Graphite Zone which has displayed potential for well-developed graphite mineralisation.

Drilling is underway with the goal of extending the mineral resource in the Northern Graphite Zone.

SGA has planned additional holes up to 1km both north and south of the current Mineral Resource based on geological mapping and surface test pitting.

The planned drilling is expected to be completed by November 2022, helped by the addition of the second diamond drill rig which has improved productivity on site.

As for the metwork, today’s update reassured us that SGA is making progress on this front, yet there is plenty more to come.

The flotation test work undertaken so far by SGA’s Australian testwork partners has focused on grinding to finer sizes to liberate the minerals in pursuit of higher levels of graphite purity.

SGA will continue with this approach with further testing planned from a range of different laboratory partners. It has now partnered with German labs, Pro-Graphite and Anzaplan, to progress the next steps of the metallurgical test work program, aiming to improve on the historical results that returned purities up to 98.6%.

Below is our SGA Investment Memo, where you can find a short, high level summary of our reasons for Investing including the following:

Our Latest Investment is…