Disclosure: S3 Consortium Pty Ltd (The Company) and Associated Entities own 1,490,000 EMN shares at the time of publishing this article. The Company has been engaged by EMN to share our commentary on the progress of our Investment in EMN over time.

It’s the news we wanted for this Investment.

An offtake term sheet - and hopefully the first of many.

Verkor is a French battery manufacturing company founded in 2020, with some serious backers.

Among those involved with Verkor are Renault Group (big French automaker), Schneider Electric (massive €83BN capped French multinational) and none other than EIT InnoEnergy.

EIT InnoEnergy invested in EMN and helps facilitate these types of deals.

It's the same EIT InnoEnergy that backed Vulcan Energy Resources at 51c in May 2020.

Verkor is currently busy making its first gigafactory a reality. It is seeking a reliable, local EU supply of manganese - one that's traceable, has excellent ESG credentials and a low carbon footprint.

EMN can deliver this.

Pricing for the product with rise and fall based on an index-adjusted western benchmark price (with a floor price) - this is for a manganese product that ticks all the boxes from an ESG perspective outlined above.

This is EU made manganese, with a low carbon footprint, and EU automakers are prepared to pay a premium.

Offtake tonnages are equivalent to a percentage of EMN’s annual High Purity Manganese Sulphate Monohydrate (HPMSM) on a take or pay basis.

Deliveries will commence from first production, expected in 2027. The deal is initially for eight years of production, with potential for renewal.

Whilst the deal at this stage is ‘non-binding’ and there are some conditions, it's an excellent start as EMN goes about sourcing funding for construction - proving you have clear customer demand to construction financiers makes getting that finance significantly easier.

Why else do we think today’s news is so important?

Long time readers will know of Vulcan Energy Resources - another European battery metals focused Investment of ours - one of our best ever Investments.

We tend to mention it a lot.

We first Invested in EMN shortly after Vulcan - while Vulcan delivered constant progress and announcements over 2020 and 2021 resulting in a sustained and significant share price re-rate, EMN was a bit slow with news and progress during that time.

While EMN’s share price has performed well, we feel it is yet to live up to its full potential in the current battery metals boom.

As an example, Vulcan signed its first binding offtake agreement with electric vehicle (EV) battery maker LG in July 2021 and then backed it up with four more offtake agreements shortly after.

Over that period VUL’s share price went from ~$6 per share to reach its all time high of just under $17 in September 2021. 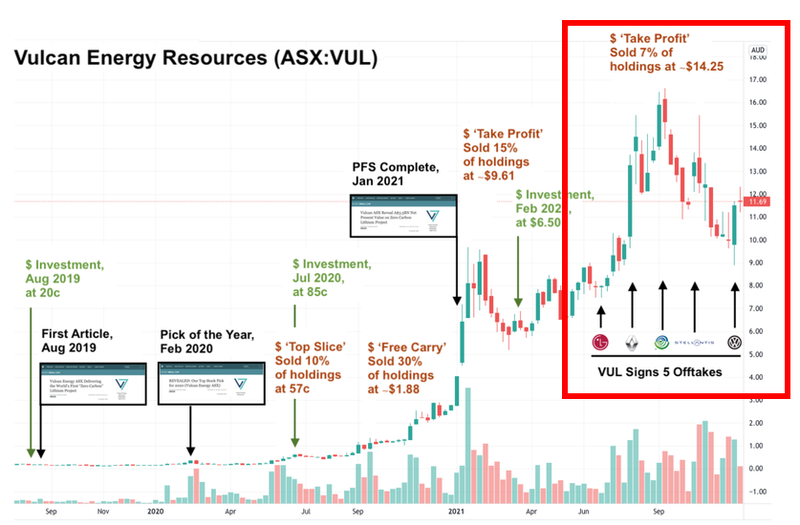 And whilst we can't predict what will happen on the market - EMN says it is now on the cusp of announcing a similar series of important offtake deals - but this time in the manganese space.

For those who are not familiar with manganese, it is a critical raw material used in nickel-manganese-cobalt batteries. These batteries are typically used in high performance cars.

While manganese hasn't been in the headlines as much as lithium or cobalt, it is still a critical raw material for battery materials supply chains.

Commodities market research firm, CPM Group, forecasts a 30-fold increase in the use of manganese in EV batteries in the 15 years from 2021 to 2036.

This will mean the battery materials market needs more and more manganese.

EMN also confirmed that today’s announcement is the “company’s first term sheet for a long-term offtake” and that “the Company anticipates more term sheets or agreements will follow in the near term as a result of the offtake tender process, which is currently underway”.

To us thats a big clue there could be more offtake deals on the horizon for patient EMN holders.

Just like the jostling to secure European lithium supply that happened over Vulcan, we think that EMN could also deliver offtake after offtake agreement.

Once the first domino falls, the rest generally follow.

We think the company’s location in Europe will be the key demand driver for EMN’s manganese.

For context, Europe currently imports 100% of its manganese requirements from China supplying over 90% of the global high purity manganese market.

And here’s where VUL signed its first offtake deal: 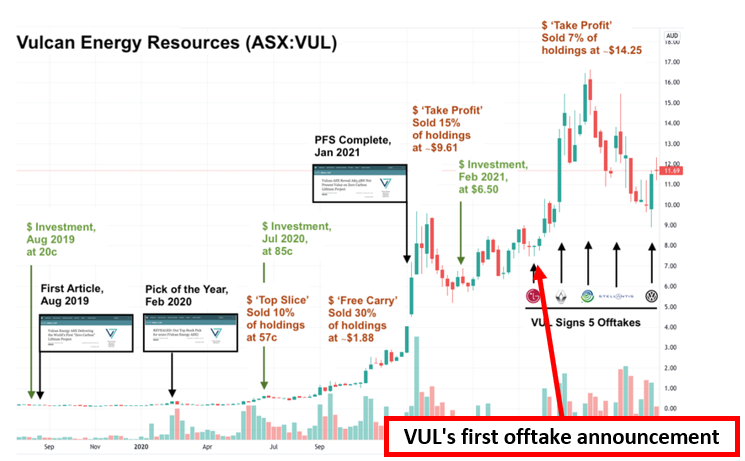 This brings us to our “Big Bet” for EMN which is as follows:

NOTE: our “Big Bet” is what we HOPE the ultimate success scenario looks like for this particular Investment over the long term (3+ years). There is a lot of work to be done, many risks involved, and it will require a significant amount of luck. There is no guarantee that it will ever come true. Some of these risks we list in our EMN Investment Memo.

To visualise what EMN has done since we Invested, check out our Progress Tracker:

More on why EMN offtake matters, and who is Verkor?

As we mentioned above, we think EMN’s offtake deal with Verkor could be the start of a series of offtakes that hopefully together re-rate the EMN share price as competitive tension around its high purity manganese product increases.

With the growing importance of manganese in next-gen battery chemistries - we think EMN has a key role to play in ensuring Europe has access to sustainable, low carbon manganese.

In short, we think today’s offtake deal shows that EMN’s project is an important source of critical minerals for Europe AND this should help EMN further advance project financing.

Verkor is a French battery manufacturing company founded in 2020, with some serious backers. Verkor has quickly raised €370M to build out French/European gigafactory battery capacity.

Among those involved with Verkor are Renault Group (big French automaker), Schneider Electric (massive €83BN capped French multinational) and none other than EIT InnoEnergy (source):

EIT InnoEnergy is the exact same EU backed group that invested in Vulcan Energy Resources at 51c in May 2020.

It’s an arm of the European Battery Alliance, which leads the organisation's industrial stream.

Most importantly - it is also a shareholder in EMN and facilitates these types of deals.

So it appears that EMN’s relationship with EIT InnoEnergy has borne fruit as they may have facilitated the introduction to Verkor.

The company plans to raise a further €1.6BN to build out its first gigafactory, a 16 gigawatt-hour (GWh) factory in Dunkirk that should start production in 2025 to supply high-performance batteries for Renault EVs.

That 16GWh metric is enough for around 300,000 EVs a year and the ultimate goal is to increase its production capacity to reach 50 GWh by 2030.

Starting early this year, Verkor plans to build a “megafactory” - a factory producing 100 to 150 MWh of batteries - that will produce thousands of cells per day for Renault to test and use in its EVs.

We suspect that EMN’s demonstration plant products could be involved in this testing.

As a final note on today’s deal, we see this as validation of our view that EMN’s CEO Matthew James is a highly proficient dealmaker and capable of delivering key objectives for the company and our EMN Investment.

A big tick mark for EMN and our Investment Thesis...

All up, we see the Verkor deal as a watershed moment for EMN, and we’re enthused about the company’s project after delivering on this key objective from our EMN Investment Memo. 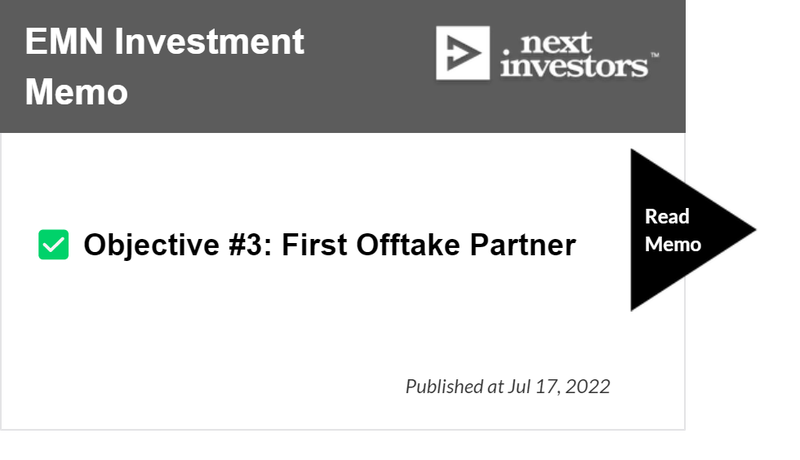 EMN said the company was targeting offtake deals - and yes whilst not ‘binding’ yet - EMN has delivered.

What’s next for EMN?

Here is what we will be watching for from EMN over the next 12 months: 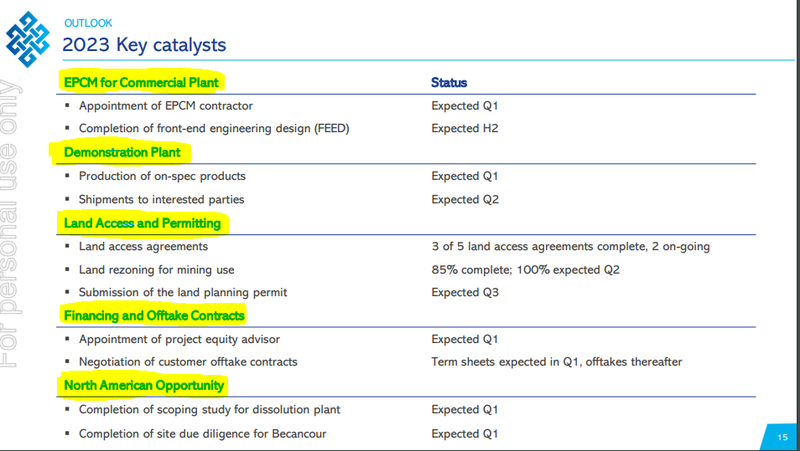 See our Quick Take on the latest for the construction of EMN’s demo plant: Demonstration plant to start producing offtake samples.

We hope that by now the construction is largely complete and product samples have started being produced.

At the same time we are looking forward to the front end engineering design (FEED) for the commercial plant due in H2 this year.

We note that today’s announcement with Verkor is a non-binding term sheet and still needs to be formalised into an official offtake agreement.

EMN mentioned that this is the “company’s first term sheet for a long-term offtake” and that “the Company anticipates more term sheets or agreements will follow in the near term”.

As mentioned earlier in today’s note we are hoping today’s news is the first offtake announcement of many this year.

EMN’s previous guidance was for a Final Investment Decision (FID) to be made by the second half of this year.

To get to a FID, EMN will need to lock in project financing and on this front we expect EMN to lean on:

This is the key slide from the latest EMN presentation: 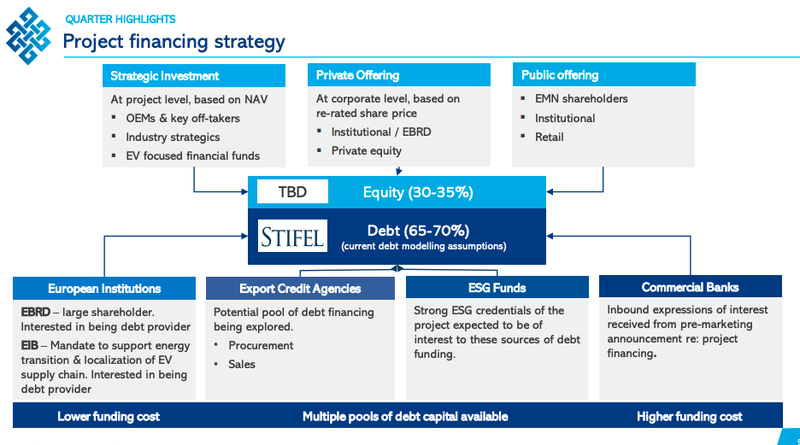 By 2031, North America is expected to require over 200kt of High Purity Manganese annually. So it makes sense that EMN is pursuing opportunities in North America (more specifically Quebec).

In addition to the expected demand from a quickly growing US EV market, the US recently passed the Inflation Reduction Act which builds in specific incentives for localisation of the battery supply chain.

Earlier this week we saw global automaker Stellantis (capped at $73BN) throw up to $30M at ASX listed Element 25 for a partnership on a high purity manganese facility in the USA.

Clearly there is an interest in these North America based battery metals processing facilities and we think EMN could start to get a lot more interest based on this after its scoping study is completed.

We’re looking for EMN to secure a “Final Mining Permit” the last bit of the puzzle for EMN to conduct any commercial extraction and processing activities at the Project.

We expect this to be largely a formality given EMN is rehabilitating an old mining deposit and cleaning it up is desirable - but European regulatory bodies can move slowly and this is an important step, especially for financiers.

While we see this as a de-risking event for EMN across the “product risk” and “financing risk” aspects of our EMN Investment Memo, EMN still has significant work to do in developing its project and completing its permitting process.

We note that EMN recently submitted its final Environmental & Social Impact Assessment to the Ministry of Environment in the Czech Republic and the environmental approval process is expected to take six months.

Beyond that, there’s a risk that the market for high purity manganese products enters a downturn, either due to a supply glut or demand impacts if EV battery manufacturers opt for alternative battery chemistries. 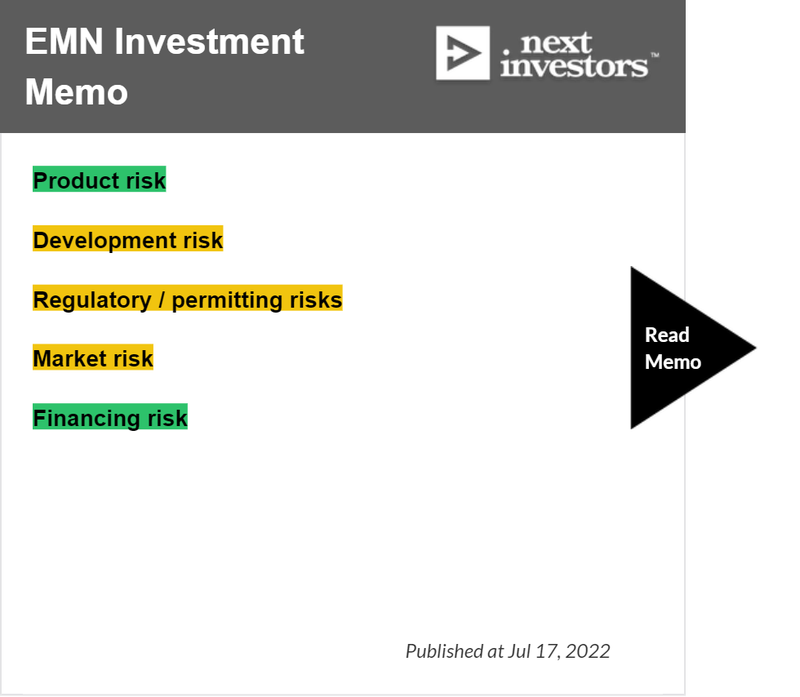 Click here for our EMN Investment Memo which includes:

EMN Update - We Have a Demo Plant. Now for Offtake Deals