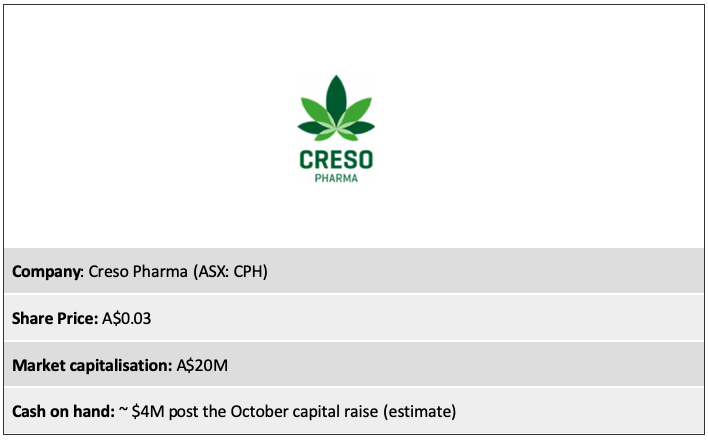 There is no doubt Creso Pharma (ASX:CPH) shareholders have had a rough ride in the last 12 months – however the company looks to have finally turned over a new page.

The company is now largely debt free, after completing a A$8.992M funding round priced at $0.0291 per share.

CPH appears to be generating more consistent revenue via its Canadian cannabis cultivation facility, has substantially trimmed is operating costs, and brought on a high-profile medical cannabis maverick as a strategic advisor.

Back in June 2019, Creso Pharma was set to be acquired for A$122M by a TSX listed cannabis company PhamaCielo. Unfortunately for shareholders, the acquisition did not proceed, and this came at the same time as a widespread downturn in cannabis stocks in general.

Following the failed acquisition, the company was forced to seek dilutive funding arrangements including convertible notes, which whilst the arrangement allowed the company to survive, it was destructive to long term holders.

We have invested in CPH a few times over the years and, like many, have been badly burnt.

However, we have decided to participate in the most recent capital raise at 2.91c, a raise which appears to have largely cleared those convertible note holders out of the company.

At the current share price levels this looks like the bottom for CPH, given what looks to have been a very high turnover of shares in recent days.

Based on those high trading volumes, it’s reasonable to assume the large convertible note holders have finally exited the company – and from here we think the company’s capital structure might have finally been re-set.

We have been watching and waiting until after the new shares have been issued, to bring you an update on CPH.

Creso is a highly speculative investment, and our intent is to hold over the coming months to see how the company’s strategy plays out.

We are looking for significant share price appreciation from here – However this is an ASX small cap stock, and there is no guarantee this investment will be successful. Remember at this end of the market, only invest what you can afford to lose.

Three key aspects have piqued our interest in CPH again.

We will go into more details on each point now.

If the share price is currently trading at around this level, investors buying on market would be coming in at the same price as the sophisticated investors that participated in the placement.

Whilst this placement of new shares is dilutive, the company has finally gotten rid of the convertible notes and debt that had been hanging over it over the last 12 months.

This means CPH is emerging largely debt free, and after significantly trimming operational costs over the past 12 months, and revenue coming in to support operations, should have some runway to execute on growth plans.

As the convertible note holders look to have largely exited the company over recent days, at a current 2.91c share price we would hope the company has some fresh air to run higher on material news.

Other things to look out for are the future conversion of options – placement participants received 1:4 options with a strike price of 5c. So, we would expect the company would certainly be trying to grow company value such that that strike price is surpassed.

The facility is actively working to secure European Union GMP certification, which will allow the export of its GMP medicinal cannabis products to Europe.

The facility commenced production midway through 2019 and has been scaling up ever since. 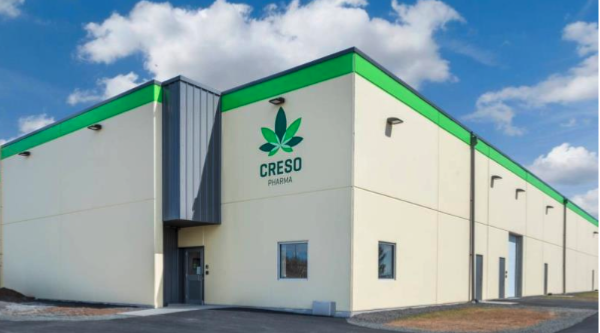 Through Mernova, CPH sees scope for expansion into new markets, and part of the funds raised have been earmarked for such initiatives.

It has also been a big couple of weeks for Mernova on the back of two purchase orders totalling A$442,390.

The significance is broader than just the dollar value, as these orders from Nova Scotia signalled the group’s entry into Canada’s retail markets. This has effectively diversified Mernova’s revenue streams and builds on an established and growing wholesale product sales pipeline.

On a year-to-date basis, Mernova has generated revenues and received purchase orders totalling more than $2 million for CPH.

The second purchase order announced this week from CPH’s European operations for Creso’s Cannamics (cannaQIX® regular) product, follows the product’s successful launch of Cannamics in South Africa in May 2020.

Behind the order is from South Africa’s Pharma Dynamics.

Pharma Dynamics, a subsidiary of the $472.3BN capped Lupin Limited (NSE: LUPIN), currently ranks as the third fastest growing pharmaceutical company in South Africa and is a leading supplier of generic medicines in the country. 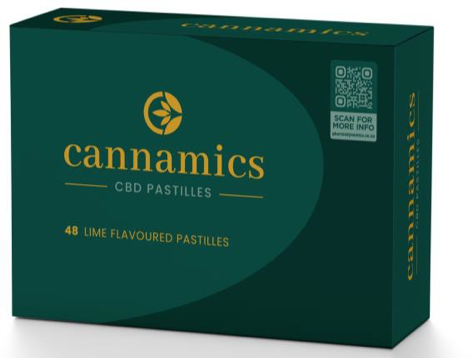 CPH is not yet profitable, but certainly if it keeps posting solid, growing revenue numbers, we would expect investors to increase their confidence that CPH is on a stable pathway.

Aside from all important revenue that supports operations, perhaps the bigger news was the addition of an influential strategic advisor to CPH.

Those who know anything about the cannabis industry, would know the name Bruce Linton.

Linton was the man behind Canopy Growth Corporation (TSX: WEED, NYSE: CGC) as they went from market minnow to a market capitalisation of more than US$15 billion during his six-year tenure.

At one stage, Canopy was one of the biggest medical cannabis companies in the world.

There is no doubt Linton knows his way around the cannabis market in Canada, as Chairman and CEO of Canopy Growth he secured market support for 16 rounds of financing totalling more than $5 Billion in capital raises and oversaw upwards of US$3 Billion in M&A transactions.

Linton is a true entrepreneur, who knows how to get deals done and drive shareholder wealth. He has unparalleled levels of connections, expertise and influence in the cannabis industry.

The former Canopy CEO and entrepreneur has been eyeing off opportunities ever since his well-publicised Canopy departure.

Following Canopy, Linton launched Collective Growth, a NASDAQ listed acquisition company (a SPAC – a type of investment vehicle that is currently all the rage in North America) that aims to exploit the potential of hemp and disrupt many industries that go well-beyond medical and recreational cannabis.

Collective, which listed in May under the symbol CGROU was able to raise $150 million at IPO and Linton believes this blank cheque organisation can grow to a billion-dollar enterprise within 18 months.

CPH has wisely turned to Mr Linton to provide some advice on how it can drive shareholder value, and as CPH holders ourselves we hope Mr Linton can leverage his deep North American networks and relationships to add value to CPH.

He will leverage his industry expertise and experience advising cannabis companies to assist Creso Pharma in its global expansion and revenue generation through its product sales channels.

Creso’s strategic European location may also play a major expansion role, as he seeks out opportunities on this continent with Creso’s hemp and cannabis products.

Linton makes an interesting point when he tells Forbes, “You can buy a BMW right now, the E series...one of them is 21% made of hemp, and none of it comes from America. None, not a scrap of it. It's all from Europe.”

Here is Linton speaking about Collective, the industrial hemp revolution and his venture into psychedelics to treat anxiety.

As you can see, there was a big hemp and European focus, which is probably what has attracted Linton.

A further point of interest for CPH investors is the Australian Therapeutic Goods Administration (TGA) announcement earlier this year, which could also open up the local market.

A recent large news event in Australia was the interim decision made by the Therapeutic Goods Administration (TGA) in relation to a major regulatory change in the status of cannabidiol (CBD) products in Australia.

The decision recommends that CBD products be down-scheduled from schedule 4 and classified as schedule 3 medicines in Australia.

This would allow Australian consumers to purchase CBD products over-the-counter (OTC) through pharmacies without the requirement of a prescription.

This is a major opportunity for Creso Pharma to enter Australia and sell its CBD and hemp products in a market estimated to be valued at $200 million and set to grow rapidly in the near term.

Currently, Creso Pharma’s cannaQIX® 50 is being sold in Australia as a medicinal cannabis product under the ‘LozaCan’ brand via distribution partner Burleighs Heads Cannabis’ (BHC).

The products contain broad spectrum organic hemp oil extracts with CBD and they are pitched at reducing stress and supporting mental and nervous functions.

Australian cannabis companies reacted well to this regulatory news and they could be given a further boost if the US presidential election falls the way of the Democrats.

Democratic VP candidate Kamala Harris said a Democratic administration would support the decriminalisation of marijuana and the expungement of criminal records (for possession).

Could Australian stocks follow suit if the Democrats win the election?

We will find out in a few weeks’ time.

CPH holders have had a rough ride over the last 12 months, but we have a feeling that at current share price levels of around 2.9c could be a decent entry point in line with the sophisticated investors that came in via the recent placement.

The debt and convertible notes issues that have plagued CPH over the last 12 months appear to have largely been resolved with this latest funding round.

With steady revenues coming in, the appointment of the highly experienced and successful Bruce Linton, the TGA announcement, and product launches across the globe, this could be the point where CPH resets and regains market confidence.

While it is difficult to predict what will happen in future, we’ll be watching the Creso story closely as it steps up its game and hopefully leverages the influence of Linton. 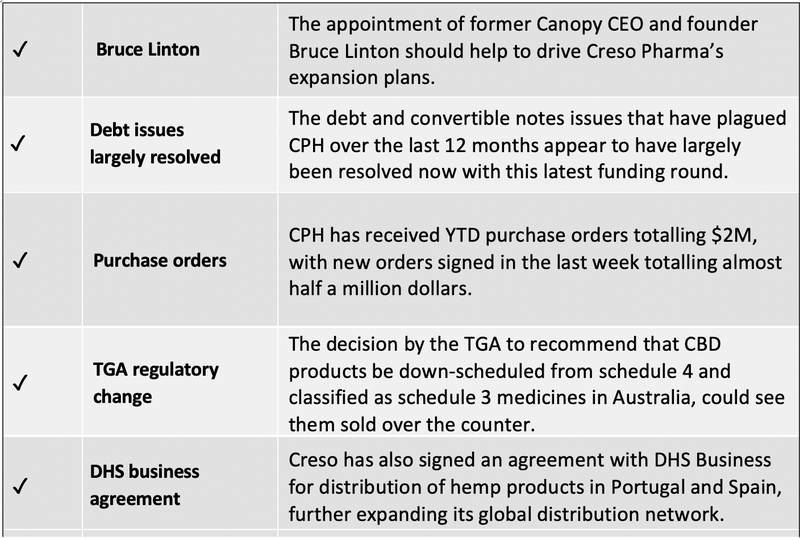 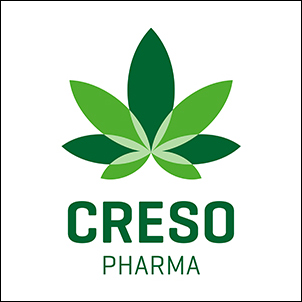