We invested in BPM Minerals (ASX:BPM) because we liked their lead/zinc project next to Rumble Resources' discovery that saw its share price gain 800%.

With drilling still a few months away on the Hawkins project, and the nickel price near 10 year highs at US$23,500/ tonne it isn't a bad time to go nickel drilling.

Today BPM announced that whilst running MLEM surveys over its Nickel project in WA it had identified 11 EM conductors.

With drill rigs hard to come by in WA, BPM also announced that it had opportunistically moved to secure a drill rig which is expected to start a 3,000m air core (AC) drilling program early next week.

BPM’s Nickel project is one of our “side-bets”, but we are going to follow this fast tracked AC drilling with interest, given we should see results in just a couple of weeks, and will provide a short term roll of the dice on some nickel EM targets while we wait for the lead/zinc drilling at Hawkins.

AC drilling is lighter shallower drilling that can reveal important information about what is above these new conductors, and help figure out if it is worth more expensive RC drilling to test for nickel.

With BPM fast tracking AC drilling on these new EM conductors, we should get early results in a couple of weeks, here is what we consider poor, good and amazing results:

To summarise, our three expected scenarios for the drilling program will be:

We want to start from the outset here by prefacing all of this with the fact that this is early stage reconnaissance air core drilling.

We are not expecting a discovery on this campaign, but what it will do is lead BPM in the right direction for RC and diamond drilling - which is where we might start to pay more attention to this ground.

In today's exploration climate, where assay labs are taking 4-6 weeks to return results and rigs are busy turning all across exploration grounds not only in Australia but all around the world, BPM must really think it is onto something given how quickly the rig was commissioned.

Since launching our investment in BPM we have always remained committed to the Hawkins project and the nearology to Rumble Resources project in the Earaheedy Basin - but with some interesting side bets in play which we did include activity on BPM’s other projects in our 2022 investment memo.

BPM is gearing up to run three drill programs in 4 months across its projects, so expect to see more newsflow from BPM side bets.

One of those side bets was BPM’s Nepean Nickel Project which sits right next door to another one of our Wise Owl exploration investments, Auroch Minerals.

We had in our investment memo that we wanted to see BPM do some RC drilling, we hope to see the air core drilling program across these 11 EM conductors set the scene for some prospective targets that warrant RC drilling in the months to come”.

With aircore drilling BPM can drill down on the 11 EM conductors and pinpoint the highest priority targets which can be tested with deeper RC/diamond drilling should there be anything of interest.

But with nickel prices trading at near its 10 year highs at US$23,500/t it isn't the worst time to go drilling for nickel. 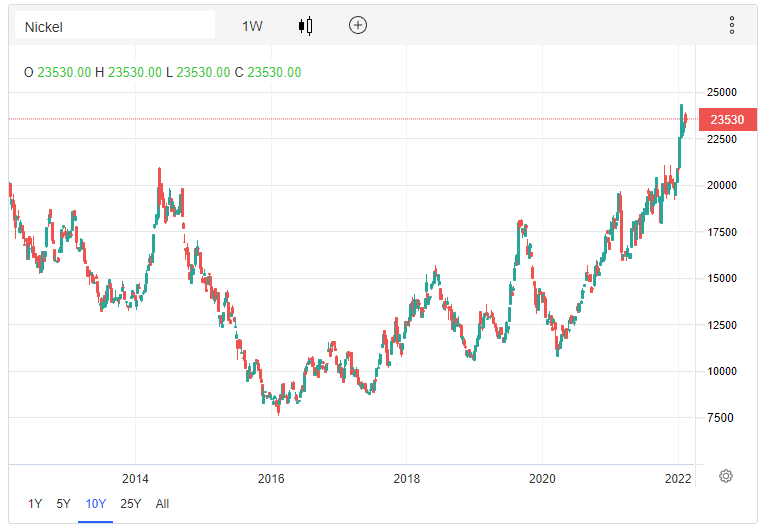 More on the nickel EM targets

In today’s announcement, BPM has highlighted 11 specific EM conductors that are separated into three separate clusters.

BPM has called these “eastern, western and southern clusters”.

Before we detail these targets though, it is important to remind ourselves what BPM have done here in the past.

In May 2021, BPM did its maiden 139 hole (5,836m) air core drilling program over these same grounds and managed to intersect “ultramafic rocks” which are the typical host rock structure for nickel sulphide discoveries.

The best results from that drilling program can be seen here:

Nothing high grade, and nothing that would make us write home about, but it is still a sign of nickel mineralisation across the project area.

The significance of the most recent drilling program is that the MLEM surveys were done based on all of the data BPM collected then.

This brings us to where BPM is at now, with 11 new EM conductors identified, which essentially builds an improved understanding of the nickel potential on BPM’s project.

Below is a side by side comparison of where the previous drilling was done and where the new EM conductors have been found. 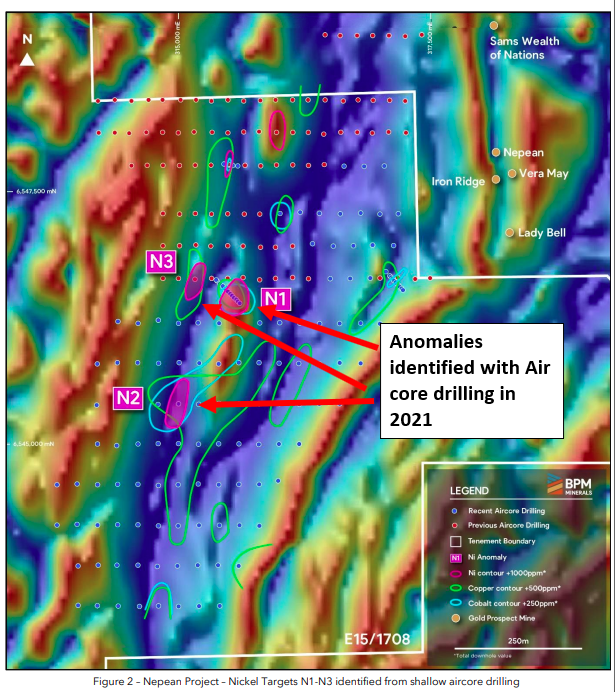 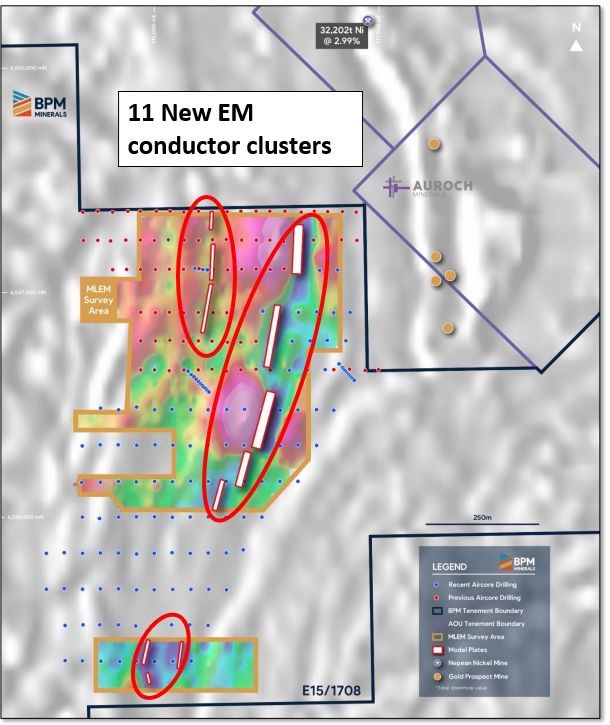 BPM has categorised the clusters based on their positioning over the project area.

The first is the western cluster - seen to the left of the image above.

BPM has three main targets here which it says range from 200-550m in length and 200m in depth.

The second is the eastern cluster - seen to the right of the image above.

The third is the Southern cluster - Seen at the bottom of the image above.

This is the smallest of the three clusters with three conductors ranging from 125-300m in length and 125m in depth.

All in all, the conductors are not small, a nickel sulphide discovery with a ~700m length and 300-400m depth could be transformational for any company. However we won’t know this until after the current round of AC drilling and BPM gets onto RC drilling.

Of course BPM is still a long way away from this and exploration is a risky business to be in so we will need to see some drill results before we can think about a discovery too much.

So why are these EM conductors important?

Galileo, which is backed by Mark Creasey, is trying to replicate Creasey’s first two nickel discoveries including the $1.8 billion Nova Nickel discovery in the Fraser Range region in WA.

GAL is looking for EM targets and then drilling them to see if it can make a nickel discovery.

EM surveys are a common geophysical exploration technique and almost all junior explorers seem to use them at one stage or another.

The significance to BPM’s announcement is that there is a history of nickel discoveries being made off the back of interesting EM conductors.

Of course it's only air core drilling, and we have seen many of these type programs return nothing in the decades we have been watching the markets.

If anyone has been following the Galileo story they will know that air core drilling is mostly used to triangulate targets and work out which of the EM conductors warrant follow up deeper drilling.

So we won't be expecting BPM to announce a nickel discovery after this drilling program is done.

More so, we just want to see that these conductors actually represent nickel sulphide mineralisation.

Once the results are back we will have a better understanding of what BPM is sitting on here.

What’s next for this Nickel project?

With drilling set to commence early next week, we anticipate it will run for at least 2-3 weeks, it's hard to say when the assays should come back especially given how busy assay labs are all around WA.

We don't expect anything to blow us out of the park from this drilling program, we more so want to see that the EM conductors are in fact something and make the wait for the assays that much more interesting.

AGAIN: To summarise our three expected scenarios for the drilling program will be:

Caveating this again, it's important to remember this is only air core drilling, BPM is likely not trying to make a discovery here, just trying to prove out their geophysics work before coming back with a heavier rig and really trying to see what's there.

It's important to remember that our main reason for being invested in BPM is its Hawkins project in the Earaheedy basin.

In our investment memo that project sits under key objective #1 and this is still our primary focus with our BPM investment, as for the nickel project, we want to see the RC drilling program which will come after this air core program is done.

Below is a screenshot of our 2022 investment memo detailing these objectives.

An “Investment Memo” is a short, high-level summary of why we continue to hold BPM and what we expect the company to deliver in 2022.

Click the button below to read the BPM Investment Memo: