Our graphite Investment Sarytogan Graphite (ASX:SGA) this morning announced the discovery of high-grade graphite mineralisation outside of its existing resource area.

SGA’s huge graphite project in Kazakhstan already has an inferred JORC Resource of 209Mt at a grade of 28.5% TGC (total graphite content) for 60Mt contained graphite.

This metwork will reveal what kind of graphite SGA is sitting on, including the optimal extraction process and the ideal market to sell to - we expect to hear more on this soon.

Today’s news comes off the back of just released forecasts for battery materials demand by Benchmark Mineral Intelligence, estimating that 97 new graphite mines will need to be built over the next 12 years: 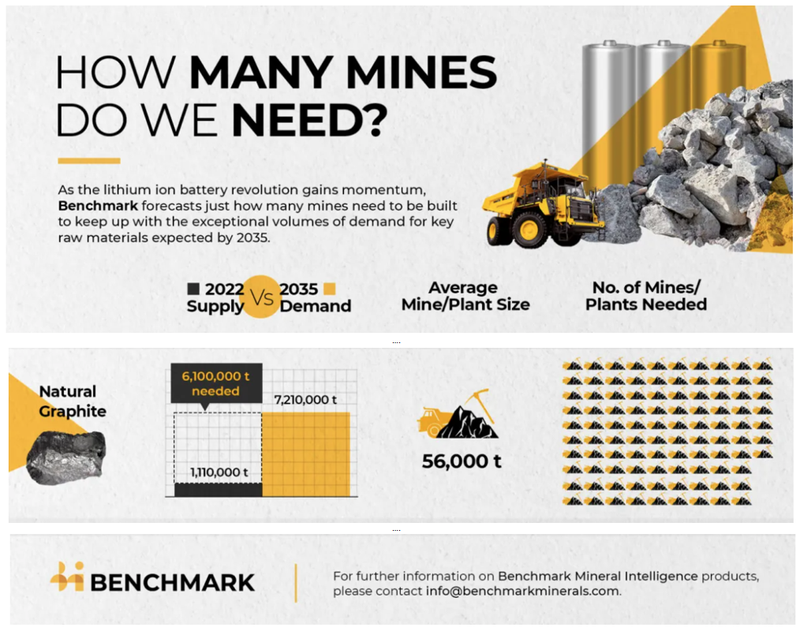 While drilling north-east of the JORC resource (which sits within the project’s Central Graphite Zone), SGA encountered high-grade graphite mineralisation in multiple holes that extended to depths of greater than 200m.

These results extend 300m north of the known extent of the mineralisation and with the significant depths encountered, there is potential to extend the existing Resource.

As well as the thick, high grade graphite intercepts from outside the JORC resource area, SGA today also reported high grade assay results from within the Central Graphite Zone, which has an already defined resource.

These include an “exceptional individual assay result” of 2m grading an extremely high 53.9% TGC (total graphite content) within a broader intercept of 21.6m @ 35.6% TGC.

We saw this drilling in action when we visited SGA’s project last month - and now we have got the assay results:

You can read a summary of our visit to SGA’s graphite project in Kazakhstan here.

Graphite is a critical raw material used in manufacturing lithium-ion batteries for electric vehicles — it can’t be substituted in battery anodes for any other material. By 2050 it is forecast that the battery market will require five times more graphite than today.

Strategically, SGA’s project is located between Europe and China — key battery and electric vehicle markets that are in need of secure graphite supply.

Our “Big Bet” is for SGA to prove out the size and economic extractability of its graphite resource and generate interest from major mining companies, leading to a takeover of SGA for $1 billion+.

NOTE: This is what we HOPE the ultimate success scenario looks like for this particular Investment over the long term (3+ years). There is a lot of work to be done by the company to get to this outcome and obvious risks to which need to be considered, some of which we list in our SGA Investment memo below.

To see how SGA could achieve this, the risks and what we’re watching for SGA to do over the coming months, check out our SGA Investment Memo:

These are outside of SGA’s existing 209Mt @ 28.5% TGC Inferred Mineral Resource area which is within the project’s Central Graphite Zone. 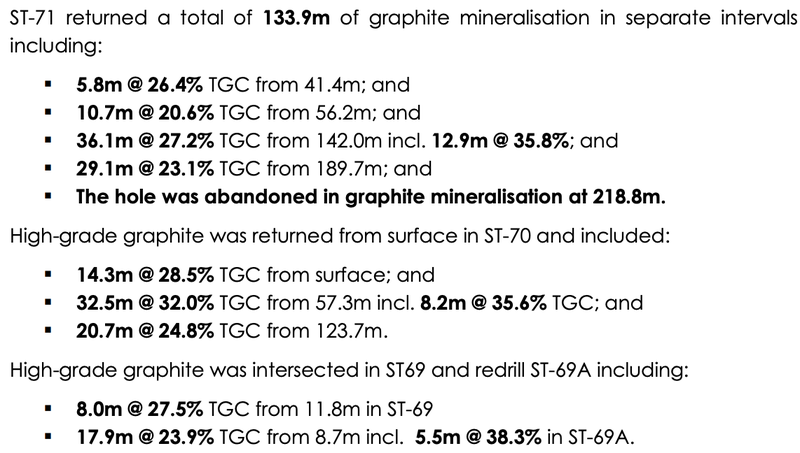 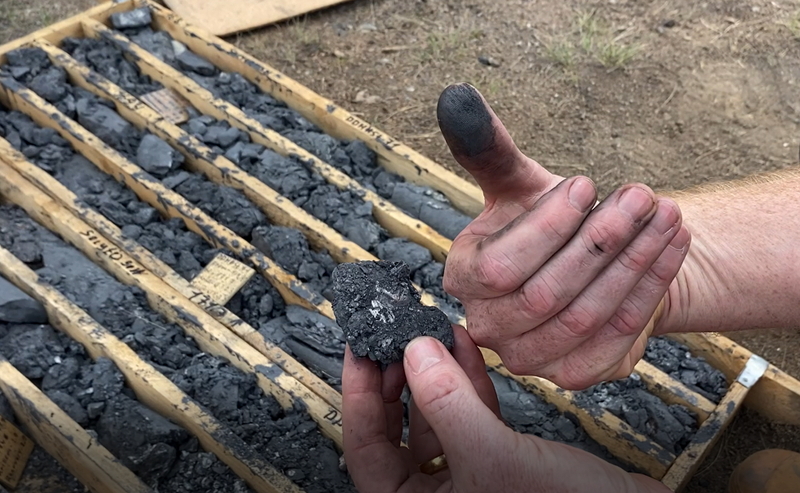 Image of high-grade graphite at 170 metres (in drillhole ST-71) north-east of the Central Graphote Zone:

The graphite mineralisation encountered here extended to depths of greater than 200m and the results extend 300m north of the previous known extent of the mineralisation. This points to the potential to extend the already giant Inferred Mineral Resource. 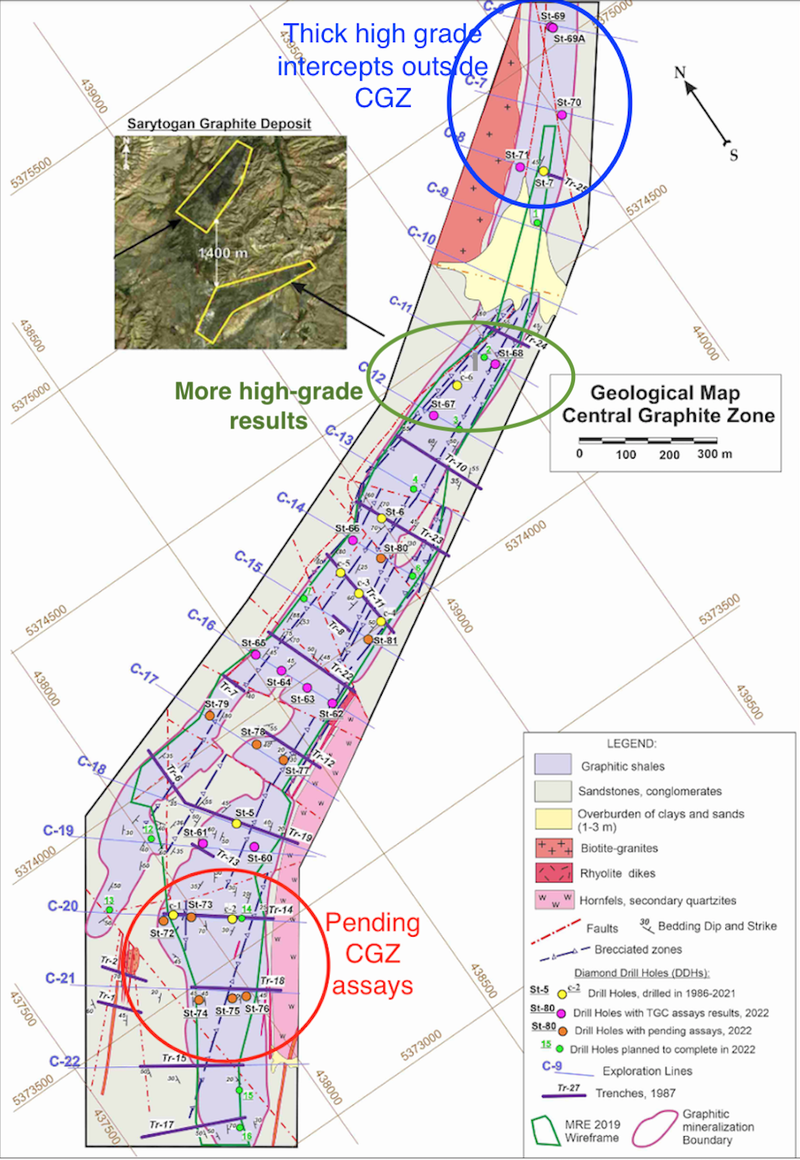 Additionally, assays are pending from the completed drillholes (ST-72 to ST-76 circled in red on map above), where SGA drilled more “intensively metamorphosed rocks” in the Central Graphite Zone.

While we’ll know more shortly, the make up of these rocks points to the potential for well-developed graphite mineralisation in this area. 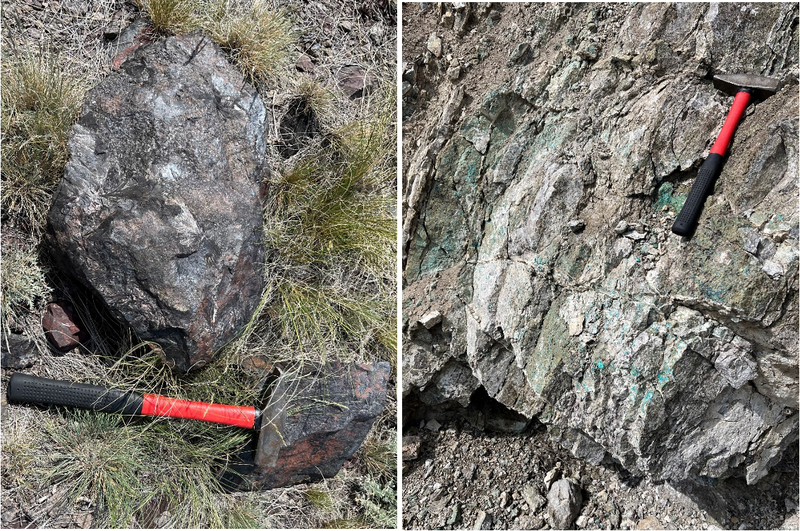 SGA added a second diamond drill rig a couple of months ago which improved productivity.

So far this year SGA has drilled 24 holes for 1,937m at the project and now expects the drilling program to be completed by November. This should allow for an updated Mineral Resource Estimate in the first quarter of 2023.

How today's announcement relates to our Investment Memo

An updated Mineral Resource Estimatewas one of the key objectives for SGA — as outlined in our 2022 SGA Investment Memo — that we wanted to see it achieve this year.

Exploration outside of the existing resource area was not a specific objective of ours in our Investment Memo, but we do like that SGA is taking a systematic exploration approach and is considering the entire deposit area. This will help it in identifying the best locations for future mining studies. 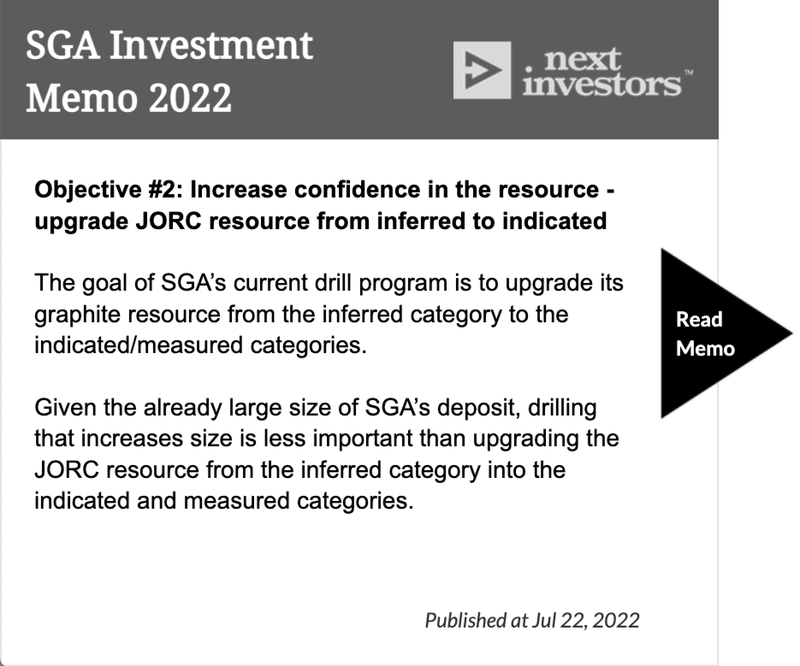 What’s next for SGA?

Further drilling is underway within the Central Graphite Zone as well as to the north and south of the Northern Graphite Zone:

This should allow for the JORC resource estimate to be updated in the first quarter of 2023. SGA will be looking to report some areas at the higher Indicated Mineral Resource classification.

SGA also noted that the highly-awaited metallurgical test-work including floatation, sintering/roasting, and leaching has commenced at laboratories in Australia and Germany.

SGA is hoping to replicate the historical results in which purities of up to 98.6% were reported.

This is a key objective that we want to see from SGA this year, as outlined in our Investment Memo: 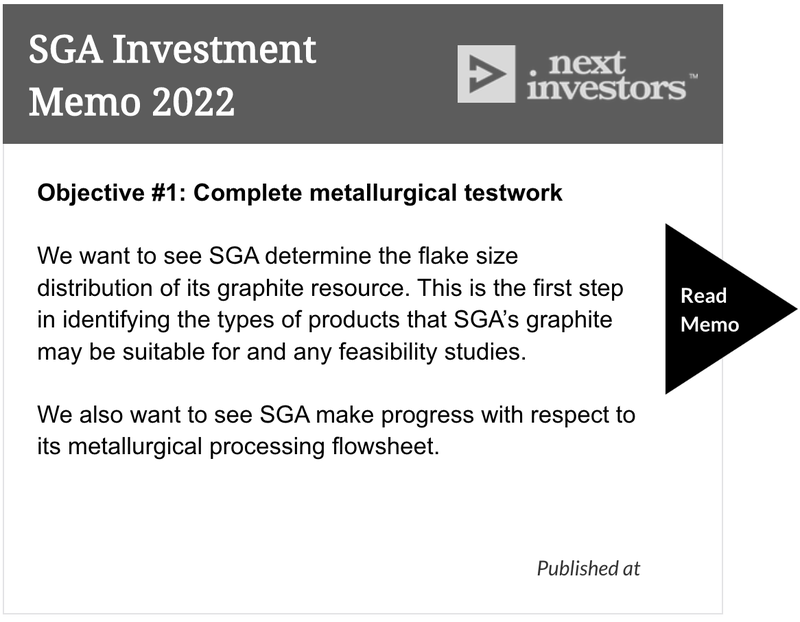 Below is our July 2022 Investment Memo for SGA, where you can find a short, high level summary of our reasons for Investing.