Disclosure: S3 Consortium Pty Ltd (The Company) and Associated Entities own 3,725,000 TEE shares and 1,850,000 TEE options at the time of publishing this article. The Company has been engaged by TEE to share our commentary on the progress of our Investment in TEE over time.

Every second headline over the last few weeks has been centred on an energy crisis across Australia’s east coast.

The root causes for all of this?

One issue is the east coast gas shortage.

What’s becoming clear is that even a country like Australia — one of the world's biggest exporters of liquefied Natural Gas (LNG) — is not immune to energy security issues.

Enter Top End Energy (ASX:TEE), our junior gas explorer, which is focused on making gas discoveries in Queensland (Adavale Basin) and the Northern Territory (McArthur Basin near the Beetaloo Basin).

TEE holds a 50% interest in no less than 30 different permits covering over ~162,000km2 in the Northern Territory with exposure to five key basins prospective for gas — the McArthur Basin, Wiso Basin, Georgina Basin, Murraba Basin, and the Amadeus Basin.

We are most interested in TEE’s McArthur Basin permits adjacent to the Beetaloo sub-basin — one of Australia's most prospective basins.

Here, TEE is surrounded by some of Australia’s biggest energy companies, including Santos (capped at $25 billion) and Origin (capped at $9.8 billion).

TEE is still very early in its company lifecycle, with most of its permits in the Northern Territory under application meaning it still has to sort out access agreements before any exploration work can happen.

While we wait for TEE’s permits to be granted, it’s worth staying up to date on all of the activities planned in the region to keep track of it over the coming months.

The premise is that any new developments could make property in this part of the NT “hot” and bring more investor interest to our tiny gas exploration Investment.

After reading through recent announcements from gas explorers in the region, we came across the following key exploration programs (planned or currently underway) across the Beetaloo for the second half of 2022.

All of the below will be watched by TEE investors as they could directly aid in increasing the value of TEE’s permits.

Over the next few months, we will keep tabs on the results from these programs and check if any of this has implications for TEE.

In our view, any success in the region should trickle down to the junior explorers and ultimately increase the value of acreage with gas potential in the Northern Territory.

This is why we are Invested in TEE.

Whilst TEE completes all of its pre-drilling work, we think it is highly leveraged to any success by its neighbours that are further developing the region as Australia’s next major gas producing basin.

To see the key reasons why we Invested in TEE and why we continue to hold it in our portfolio, check out our 2022 TEE Investment Memo by clicking on the image below: 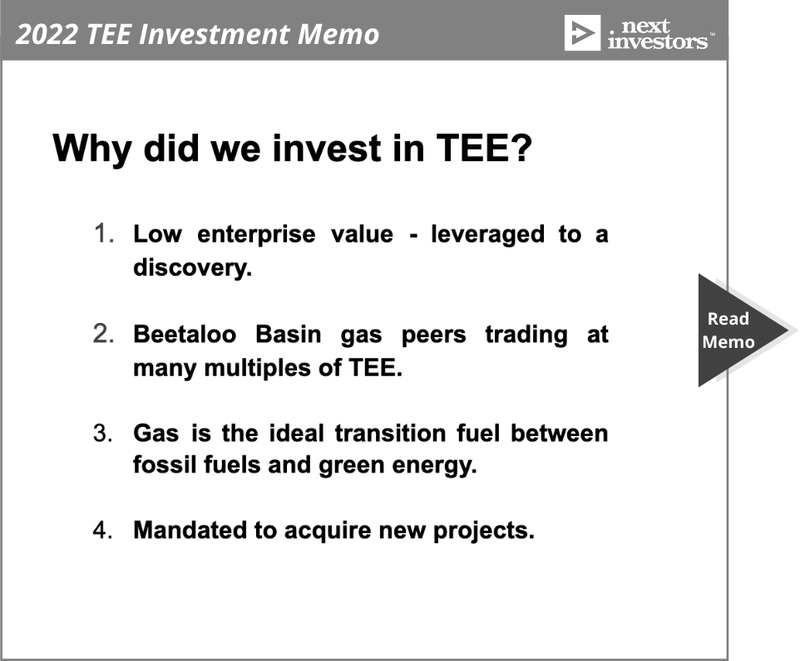 Exploration programs in the NT we are monitoring

The slides below from a recent Empire Energy corporate presentation sets the context for the significant exploration works being done in the Beetaloo sub-basin for the rest of the year.

These are the main exploration programs that we will be keeping tabs on and all have direct implications for TEE: 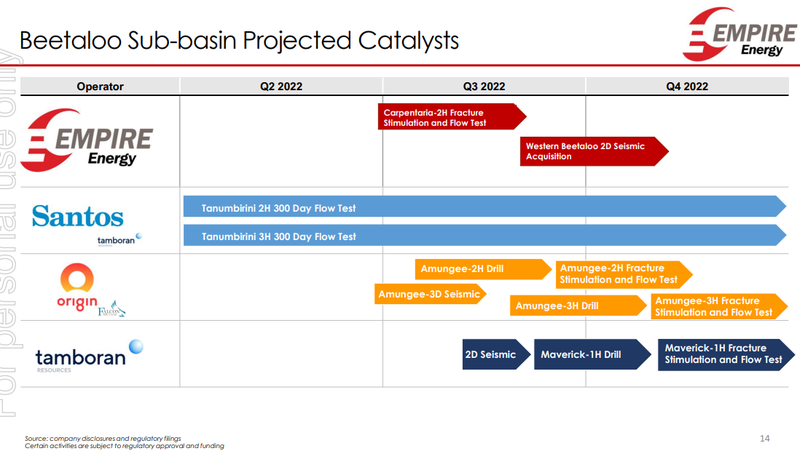 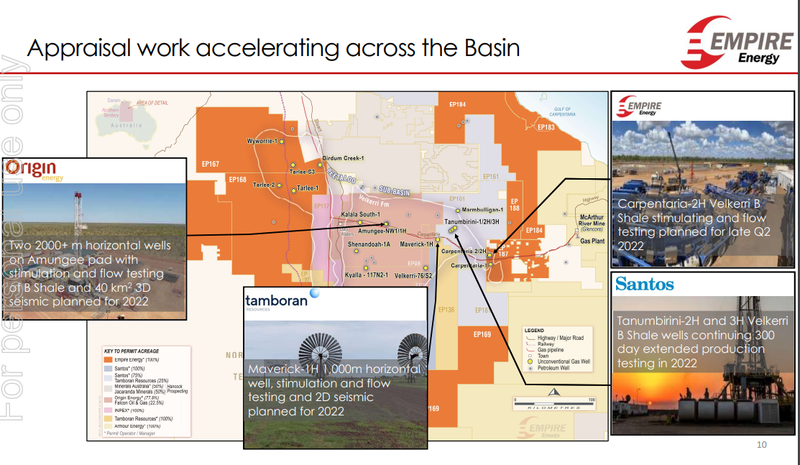 What they are doing: Two well drilling and flow testing program.

First, is the two well drilling programs being done via the joint venture between Origin and London-listed Falcon.

For the remainder of 2022 and going into early 2023, a large part of the JV’s exploration program is to drill out and production test two horizontal wells (Amungee-2H and Amungee-3H).

These wells will follow up on the drilling done last year, where the JV confirmed a normalised gas flow rate equivalent to 5.2-5.8 mmscf per day per 1,000m of horizontal well section.

That result met what industry analysts consider a “commerciality standard” of 3MMscf per day (per 1,000m of horizontal well section).

Origin and Falcon plan to drill two large wells to see if they can continue proving commercial flow rates across the Beetaloo Basin.

Success across Origin and Falcon’s permits could translate into heightened interest in the Beetaloo sub-basin and its surroundings as the next major gas supply source into the gas hungry east coast gas markets.

What they are doing: Two well long term producing testing

When it is happening: Currently ongoing

The first well (Tanumbirini 2H) has averaged a flow rate of ~2.6 mmscfd normalised for a 1,000-metre horizontal section over an initial 83-days of flow testing.

The second well (Tanumbirini 3H) has averaged a flow rate of ~2.5 mmscfd normalised for a 1,000-metre horizontal section over 32-days before being shut in for pressure build-up in mid-February 2022. 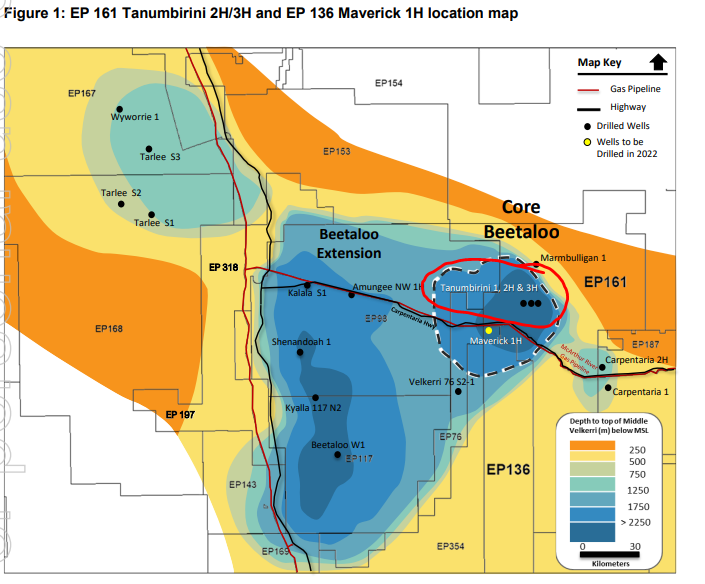 The JV plans to have production tubing installed across both wells in Q3-2022.

The joint venture can’t commence any new exploration work before 2023, so most of the work will be centred around continuing to test these two wells and the installation of the production tubing.

What they are doing: One well to be drilled and flow tested.

Third, Tamboran is currently running a ~90km^2 2D seismic acquisition program leading up to a drilling program in Q3 of this year.

Tamboran has already signed up a drilling contractor and is in the middle of the 2D seismic data acquisition program.

The drilling program (Maverick-1H) will be a ~1,000m horizontal well with 20 different fracture stimulated stages, which would increase the intensity of fracturing done at the Santos/Tamboran JV.

This drilling program is drilling into an entirely new prospect, so any good news could interest the market.

Given Origin and Falcon's claimed “commerciality standard” of 3MMscf per day (per 1,000m of horizontal well section), any result above this should interest the market. 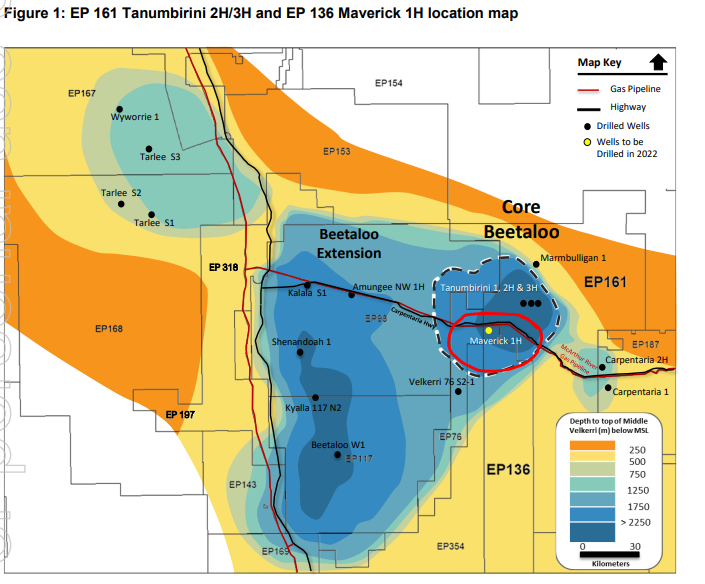 Tamboran is currently trading at a market cap of $165M.

Success here could mean the company’s share price re-rates, and any subsequent increase in market cap will make the look through value of TEE’s permits much more interesting.

What they are doing: One well to be drilled and flow tested.

Empire’s exploration program for this year will follow up on the Carpenteria-2H well, drilled in Q4-2021 for a total depth of 3,150 metres, including a 1,345-metre horizontal section.

Empire plans to fracture stimulate the well and has all of the regulatory approvals in place to complete an extended production test for up to 90 days.

Concurrent to the drilling of the Carpenteria well, Empire is looking to get regulatory approvals for a 2D seismic acquisition program — a precursor for an exploration program across its “Western Beetaloo” prospects (EP167 / EP168), which would comprise up to six horizontal wells.

This looks unlikely to happen this year, given it is still going through the permitting process. But the 2D seismic data should be interesting and provide more technical information regarding the basin structures.

In summary, we have our eyes on four different exploration programs. We will be monitoring the results to see whether they have any implications for TEE’s permits.

These companies trade at significant premiums to TEE’s market cap of $12.8M, mostly because they are active and well advanced with their exploration prospects.

The positive from all of the capital pouring into the Beetaloo sub-basin is that any permits granted and ready to be explored will become a lot more valuable if the industry is well developed.

What’s next for TEE?

Granting of permits at the company’s NT project 🔄

In a recent update, TEE confirmed that it is prioritising the granting of key permits that sit around the edge of the Greater McArthur Basin, immediately south of discoveries within the “Velkerri” and “Kyalla” shale prospects and the “Moroak” and “Bessie Creek” conventional targets.

The significance of these permits is that they are the ones that sit right under the “Velkerri Shale”, — the gas target that majors like Santos, Origin and Empire Energy are targeting across the Beetaloo sub-basin.

This is why we think the drilling activity from TEE’s neighbours could potentially have an impact on the look through valuation of TEE’s ground in the region.

If the majors can prove out commercially flowing gas at this shale layer, we suspect the market will become a lot more interested in the ground TEE holds.

In the same update, TEE confirmed that it had received indicative dates for meetings with native title holders for one of the key permits (EP 258) in Q3 2022. TEE is also looking to get EP 259 meetings done simultaneously.

TEE has confirmed these are the priorities for TEE in the near term. 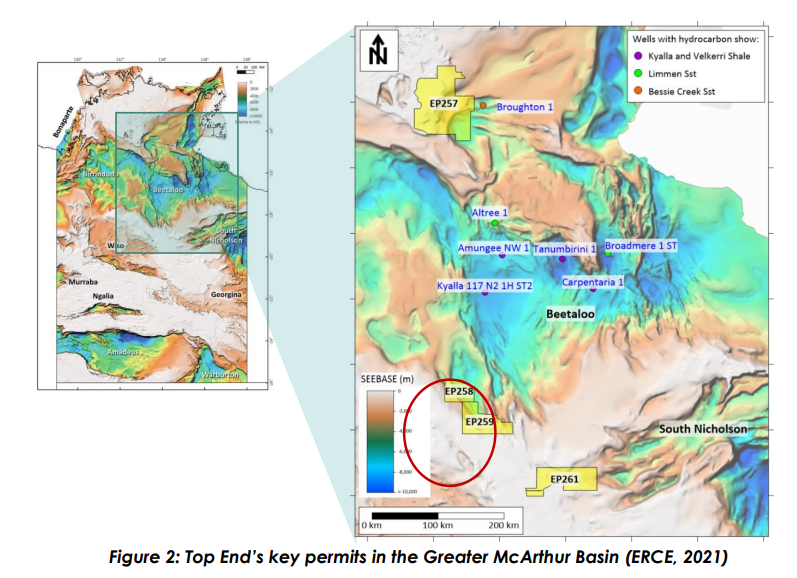 As part of its 2022 work program, TEE recently confirmed that it plans to reprocess and reanalyse the existing ~90km of 2D seismic data available over its QLD project.

The desktop works' ultimate aim is to identify prospectivity over its permits better and further develop the company’s understanding of its project.

TEE has also flagged a potential additional 2D seismic acquisition program for a further ~120km^2 of seismic data.TEE’s decision on whether or not to proceed with this will depend on the outcome of the reprocessed data.

This is contingent on the findings from the reprocessed existing data.

TEE recently confirmed that it has already started negotiating land access agreements for this program, but we aren't expecting any other news regarding this until we see some of the results from the reprocessed existing seismic data.

Our TEE Investment Memo for 2022

Below is our 2022 Investment Memo for TEE, where you can find a short, high level summary of our reasons for investing. 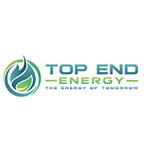