The US uranium industry had a major win overnight, with a bill set to be passed that would ban the import of Russian uranium to the US.

While the timing of the bill looks to be a direct response to Russia’s invasion of Ukraine, we note that it is also a longer term strategic move to support the American uranium industry.

Wyoming Senator John Barrasso led the bill — Wyoming happens to be home to 80% of US domestic uranium production. It is the same state where Bill Gates and Warren Buffet are investing US$4BN on a next generation Nuclear power plant.

At present Russia is a significant supplier of uranium and enrichment services to US utilities, with up to 20% of reactor requirements met by uranium enriched in Russia.

A ban on these Russian imports could result in the restarting of the entire uranium supply chain in the US.

Another win for uranium companies is the recent surge in uranium prices — uranium is now at an eleven year high at ~US$56/lb.

While the conflict in Ukraine has lifted the price in the short term, there are longer term factors that should see uranium prices supported, including the global shift to cut fossil fuels.

This all bodes well for our investment GTi Resources (ASX:GTR) which is chasing an ISR (in situ recovery) uranium deposit in the heart of Wyoming.

GTR is up 18% this morning. And while a potential ban on Russian uranium is a positive for GTR, the big news is that GTR has now completed the final drill holes of its maiden drilling program, on time and within budget.

Results from the 100 hole ~15,000m drilling program are due in mid-April — arguably the perfect time to make a uranium discovery.

The drilling program is centred around an area where uranium was previously discovered in the 1970-80’s. The results that we have seen from GTR so far have indicated uranium mineralisation higher than or at least on par with those previous results.

The ultimate aim for GTR’s drill program has been to accurately identify the depth, thickness, grade and width of mineralisation over the project area and to either:

Those expectations were outlined as Objective #1 in the “What do we want to see the company achieve in 2022” section of our 2022 GTR Investment Memo: 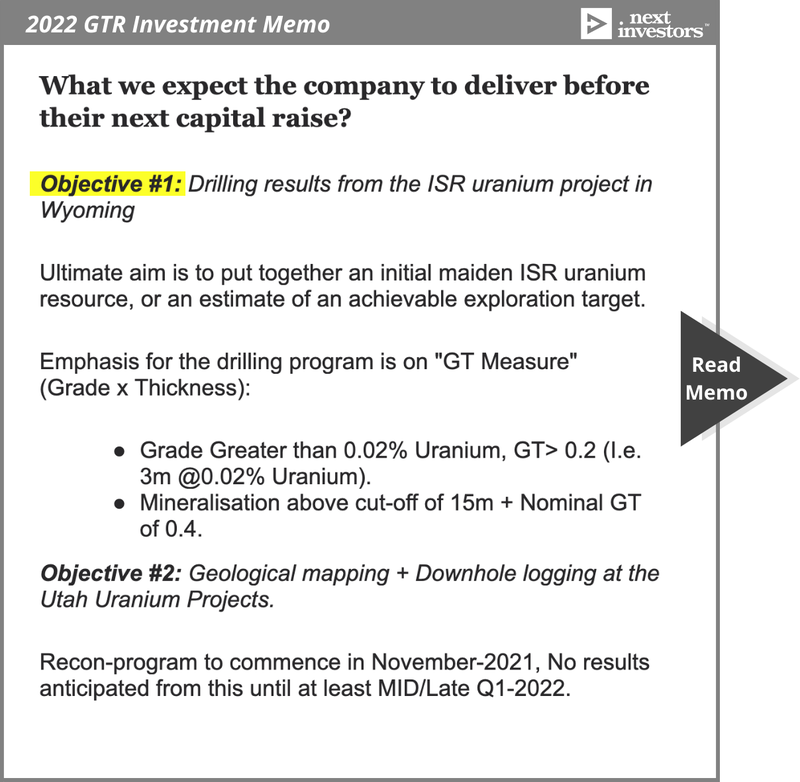 So far we’ve only received assay results from 24 of the 100 holes. Results to date have returned an average grade thickness (GT) measure of 0.68 GT, with peak results of 1.92 GT.

Where is GTR drilling?

We explained more on ISR uranium and why investors prefer these type deposits over conventional hard rock deposits in our last note which you can read here.

This part of the US is home to ~80% of domestic US uranium production and is within transportation distance of seven operating ISR uranium facilities, and two more that are licensed for construction.

Activity in the area is crucial to be able to bring any ISR discovery onto the market quickly. 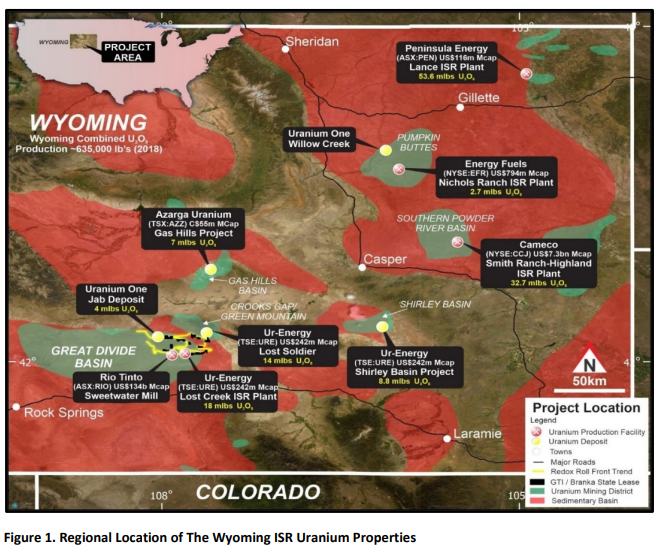 GTR's projects surround the Lost Creek ISR facility which has a ~12m lbs resource grading 0.044% uranium. It’s operator UR-Energy claims that the project is the lowest cost uranium producer outside of Kazakhstan. 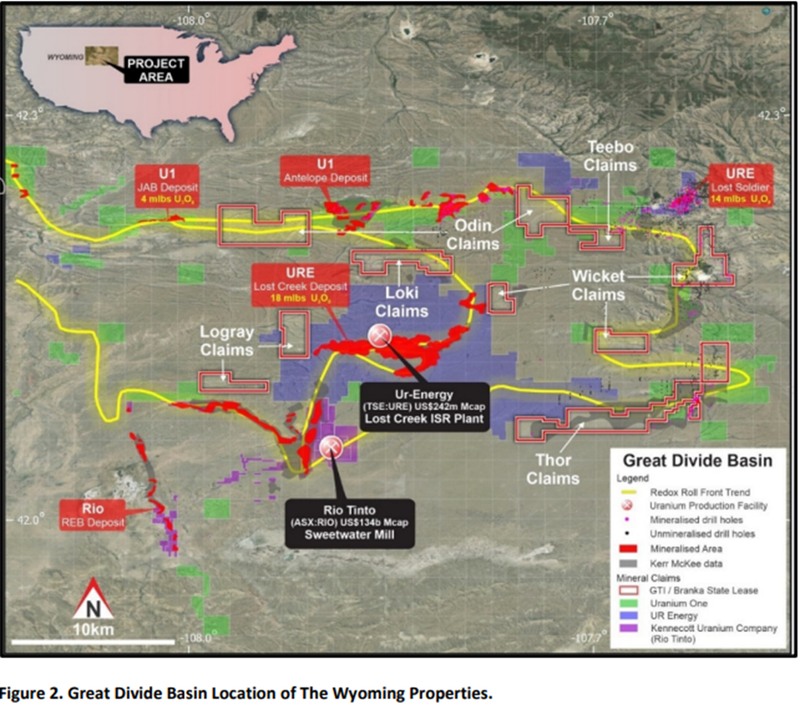 GTR’s recent drilling was targeted over the “Thor Claims”, as seen in the image below, right above the area where uranium mineralisation was identified by Kerr McGee in the 1970’s and 80’s. Interestingly, the Lost Creek deposit that UR-Energy is operating sits on a ~9.5km strike zone, whereas GTR’s Thor Claims, alone, sits on a larger strike zone of ~11km.

We don't think we are the only ones watching to see the drilling results from GTR’s project, given the potential to delineate a resource the size of UR-Energy’s.

Should a maiden JORC resource, or at the very least an exploration target be produced, we suspect that the majors in this part of the USA will also be interested.

So far we have written about the results from the first 24 of 100 drill holes. GTR has confirmed that the remainder of the results would come through by mid-April.

We will be watching to see how GTR’s drilling results compare to our expectations set in our 2022 GTR Investment Memo:

Emphasis for the drilling results will be on the "GT Measure" (Grade x Thickness) with targets as follows:

The ultimate aim is to put together an initial maiden ISR uranium resource, or an estimate of an achievable exploration target.

This will be contingent on good drilling results. For now, we have just noted it internally and want to see the drill results before explaining which of these we think GTR can go ahead and put together.

Uranium to support US energy independence

A large part of what drives investment in the uranium sector is ambitions of the EU and the US to achieve “energy independence”.

Energy independence is now front and centre in the mind of developed nations' governments, further prompted by the Russia/Ukraine conflict which, for example, has exposed the EU’s reliance on Russian energy exports.

The EU depends on Russian gas for ~45% of its imports and around 40% of its consumption.

Just before the Ukraine/Russia tensions boiled over into war, Russia, through the development of its “Nordstream 2” pipeline was about to make this dependence that much worse by increasing its flows into the EU through Germany.

To read more about the Nordstream 2 pipeline click here.

However, gas hasn’t proved to be the solution that many imagined it would and low emission nuclear energy is again back in favour, helped along in the wake of the Ukraine/Russia conflict.

The Forbes headline below is a first sign of that shift towards nuclear power, which for a long time has been known as the cleanest most efficient source of renewable energy.

Almost forced into this decision because of the regional conflicts, France announced that by 2050 it would look to build as many as 14 new nuclear reactors, with construction to commence in 2028.

Outside of the EU, China is also investing heavily in nuclear generation capacity with plans to build ~150 new reactors by 2050 at a total cost of ~US$440 billion.

For us, the macro picture is relatively clear. The EU and the US want to move away from a reliance on fossil fuels towards cleaner, lower carbon sources of energy generation. This looks like it can't be achieved without investment in new nuclear generation capacity.

So there is no path to “energy independence” without increased investment in nuclear power supply chains.

At present, Kazakhstan accounts for ~41% of Global Uranium supply and with most of its projects made up of ISR uranium deposits is the lowest cost producer in the world.

Kazakhstan shares one of the largest borders with Russia and is landlocked meaning it requires stability regionally to be able to get its exports out and into the global markets.

The significance here is that any sort of regional conflict could impact the trade routes that Kazakhstan uses to export its uranium.

As a result, countries that are looking to secure energy independence through investment in nuclear generation capacity also need to tackle the issue of the fuel to those reactors.

That is by establishing domestic supplies of Uranium in jurisdictions that are friendly to the west.

In fact, as we highlighted above, today we saw the introduction of a bill that could see a ban on all uranium imports from Russia, which accounts for ~20% of all enriched uranium imports in the USA.

The case to throw capital behind domestic exploration/development projects in the uranium sector keeps getting stronger and stronger day by day.

This all forms the basis for two of the main reasons we continue to hold GTR in our portfolio, which you can find in our 2022 GTR Investment Memo by clicking the image below: 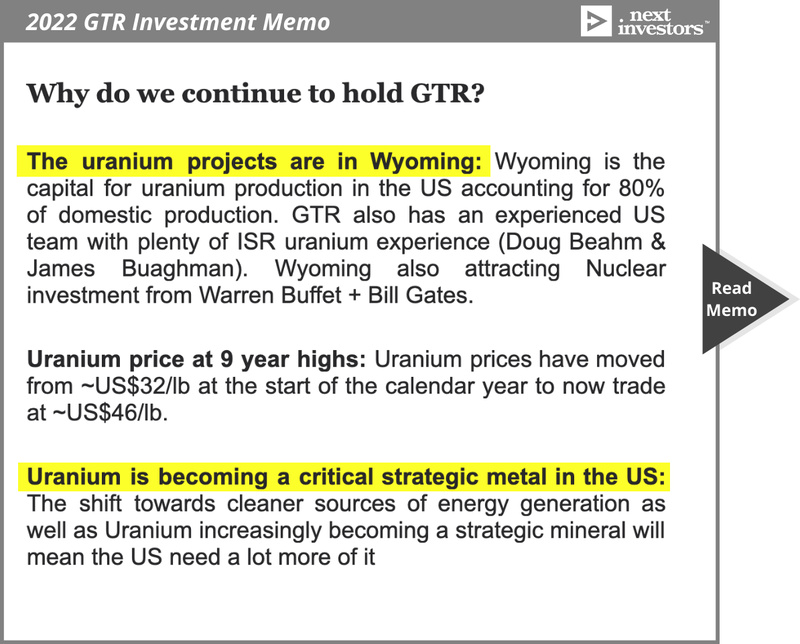 The Investment Memo provides a short, high level summary of our reasons for investing.

Its ultimate purpose is to track the progress of the companies in our portfolios throughout 2022, against benchmarks that we have set for the year.