In a big tick of approval for junior gold explorer Classic Minerals (ASX:CLZ), the company has bagged respected industry figure Klaus Eckhof as a corporate and technical advisor.

The geologist, who has more than 25 years of experience developing mineral deposits worldwide will be advising Classic on its Forrestania Gold Project in Western Australia’s Forrestania Greenstone Belt with particular focus on its Kat Gap Project. Eckhof brings technical and international fund-raising expertise and he will be responsible for marketing Classic and its projects throughout North America and Europe.

With an impressive track record dating back decades, Eckhof has proven time and again that he can deliver for small caps, particularly for small cap gold explorers.

This is the man behind Moto Goldmines’ legendary success. After founding Moto Goldmines in 2003, Eckhof oversaw the company’s share price rise from $0.04 to $4.00 per share — an almost 10,000% return.

Moto went on to delineate more than 20 million ounces of gold at the African Moto Gold Project, delivering a feasibility study within just four years of exploration. That success spurred a $502 million takeover by Randgold Resources, which itself was later acquired by Barrick Gold (NYSE:GOLD | TSX:ANX) in a US$6 billion deal.

Eckhof also made a name for himself during his time at AVZ Minerals (ASX:AVZ) where the share price of the lithium-focused exploration company surged 2,500% in the 12 months to January 2018, rising from 1.4¢ to 37.0¢.

Eckhof also previously vended the high grade Bisie Tin discovery into a TSX-V listed company, Alphamin Resources (ASX:AFM). Here, Eckhof was instrumental in identifying the Bisie Tin — one of the largest and most significant tin deposits globally. That project is now the highest-grade tin project in the world and is about to begin production.

He has also worked for Mount Edon Gold Mines Ltd before it was acquired by the Canada’s Teck Resources (TSX:TECK | NYSE:TECK). While in 1994, Eckhof founded Spinifex Gold (ASX:SPX) and Lafayette Mining (ASX:LAF), both of which successfully delineated gold and base metal deposits.

Eckhof is currently the chairman of Okapi Resources (ASX:OKR), a company focused on the discovery and commercialisation of mineral deposits in the Africa and Western Australia, and the Chairman of gold exploration company, Amani Gold (ASX:ANL), as well as being a director at Carnavale Resources (ASX:CAV).

In short, there’s no doubt that he is extremely well-connected and more than capable.

And now — highlighting his confidence in Classic and Forrestania’s potential — Eckhof is providing his expertise to Classic in lieu of any cash-based remuneration. He will receive performance rights only once Classic’s share price reaches certain target levels — even the first tranche (of three) being at a significant premium to the current share price.

This comes as Classic continues expanding its exploration programs and advancing drilling at its Forrestania Gold Project.

The Forrestania Project holds 5.36 million tonnes of gold, grading 1.39g/t, for nearly 241,000 ounces — a figure that could soon be significantly expanded given recent drilling results from its 100% owned Kat Gap tenements.

At Kat Gap, which was acquired back in January and sits just 70 kilometres south of its existing Forrestania Project, Classic has completed a series of drilling rounds.

In early September, the company reported high-grade gold intercepts at Kat Gap, found to be extending down dip with increasing width — a fact that prompted CEO Dean Goodwin to declare that the prospect has “potential to grow significantly at depth”.

Another factor working in Classic’s favour is the strong gold price. Gold has been on a tear this past few months and gold priced in Australian dollars even hit an all-time high less than a month ago thanks to the combination of the weak Aussie dollar and surging gold prices.

Now with Eckhof on board, Classic has all the pieces in place as it advances explorations. The gold price is at record high levels for Australian producers and exploration results just keep getting better.

Classic shareholders and Eckhof both have reason for optimism here. Assuming all goes to plan, the share price should hit the performance rights target prices as drilling advances at Classic’s Forrestania Gold Project.

Classic Chairman John Lester said he was “delighted that Klaus has accepted to join Classic Minerals as a trusted and capable advisor who brings a new and exciting vision to the Board and Management of Classic as Dean [Goodwin] progresses with extensional drilling at Kat Gap.

“We are privileged that Klaus with his integrity, dynamism and international network has agreed to guide, direct and enhance the vision of Classic Minerals Limited.”

Classic has agreed to issue performance rights to Mr Eckhof in lieu of any cash-based remuneration as follows:

These performance rights will expire on 31 December 2020 and each tranche issued after the company’s placement capacity is refreshed, which is expected to occur at the AGM in November 2019.

You can read more on Eckhof’s appointment in this Finfeed article:

Given the impressive recent run in the gold price, particularly in Aussie dollars terms, it’s not surprising to see promising junior explorers attract major attention. Gold’s performance has been nothing short of impressive this year, especially when AUD weakness is factored in. The precious metal recently hit record highs of A$2,290 and is now buying A$2,188. 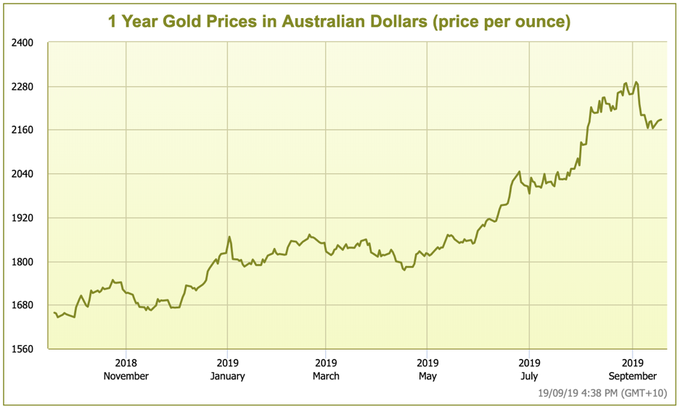 Classic added Kat Gap to the Forrestania Project when it purchased 100% of its tenements in January this year from Sulphide Resources Pty Ltd for $250,000, plus a 2% net smelter royalty (NSR) fee.

The Forrestania Gold Project contains a Mineral Resource of 5.3 million tonnes at 1.4 g/t for 240,000 ounces of gold, with a Scoping Study indicating both the technical and financial viability of the project.

The Kat Gap Gold Project (exploration licences E74/422 and E74/467) covers 37.5km2, over a 10km section of the western granite/greenstone contact at the southern end of the Forrestania Greenstone Belt.

Kat Gap is just 70 kilometres from Forrestania and it adjoins the Forrestania Nickel Project, operated by Western Areas (ASX: WSA). Kat Gap and Classic’s other tenements at FGP — Lady Magdalene, Lady Ada, and Lady Lila — are marked in red below: 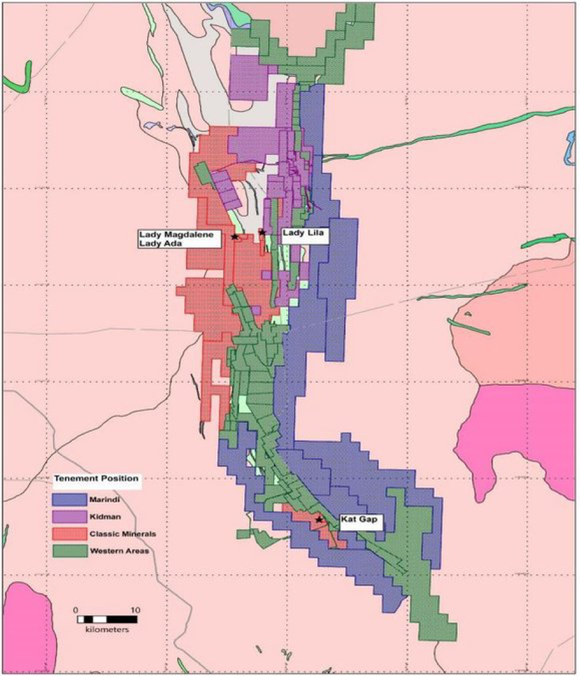 These drilling results, doubled the strike length to 400 metres — with significant gold mineralisation intersected. The results included 9 metres at 21 g/t gold from 123 metres, including one metre grading 125 g/t gold.

One of the widest intersections to date — in what must be remembered is an early stage exploration program — was 13 metres grading 4.9 g/t gold from 33 metres including one metre grading 22 g/t gold, also close to surface.

The open-ended deposit lies within a five kilometre long geochemical gold anomaly that has seen very little drill testing, and management sees the potential for the discovery of a substantial gold deposit within the project area.

As Finfeed.com said of those results, “the continued strong results highlighted today suggest that Classic could be one of the best emerging sub-$10 million market cap plays based on the value of its assets, management’s astute exploration strategy and the quality of the ore in ground that has already been established.’’

Classic is still gaining an understanding of the geology, and it is rare to find projects that consistently produce such stunning grades so early in their life. Yet still, and particularly given the value to be attributed to Classic’s other assets, the company’s market capitalisation of $8 million indicates there is scope for substantial upside.

At Kat Gap, Classic see strong potential for additional mineralisation to be identified up-dip, down-dip and along strike, both outside of and within the existing RC drill coverage.

The next stages of exploration will be to extend the known gold mineralised zone further north and south from the current drilling area.

At Kat Gap, Classic will extend the known gold mineralised zone further north and south from the current drilling area. This would entail testing the northerly extensions for another 300m and the southerly extensions for 300m. If successful, this will give a combined strike length of one kilometre.

Classic will also probe at depth down dip along the entire 400 metres of gold mineralised granite-Greenstone contact delineated to date. The plan is for several deep orientated diamond holes, designed to collect valuable structural data, to probe the system to 300m vertical below surface.

The impressive drill results reported by CLZ at Kat Gap so far, combined with the company’s ongoing aggressive exploration program at the project, and now the addition of Klaus Eckhof, — all backed by a strong gold price — suggests further positive newsflow is likely to continue rolling in as the exploration program proceeds.

From here, the next step is to drill deeper holes and follow the system down to get a better idea of size of the prize. Classic has plans for follow up RC and diamond holes with drilling scheduled for mid-October. 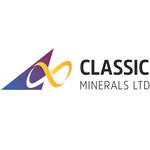