Disclosure: The authors of this article and owners of Next Investors, S3 Consortium Pty Ltd, and associated entities, own 3,432,000 TMR shares at the time of publication. S3 Consortium Pty Ltd has been engaged by TMR to share our commentary and opinion on the progress of our investment in TMR over time.

Our junior gold exploration investment Tempus Resources (ASX:TMR) just took another step closer to potentially bringing its Canadian gold project to life, delivering the result we were hoping for.

The assays from yesterday's announcement marked the second “bonanza grade” gold-hit from this newly discovered vein with intercepts from a depth of 111m as follows:

In our last note we mentioned that the drilling TMR was doing at their new Blue Vein discovery was “extensional”, meaning they were moving to the left and right of the area where the initial high grade gold was discovered and checking to see if the gold vein extends along strike.

We also mentioned that (in our opinion) if TMR could find greater than 4-5g/t gold across those drill-holes that it would be game on for the Blue Vein discovery:

With one of the two assays announced yesterday returning mineralisation of 2.7m at 13.4g/t gold (almost 3x what we were hoping) it looks to us like it is, in fact, game on at the Blue Vein discovery.

If these results HAD NOT delivered for the “Blue Vein” it may have been back to the drawing board” for TMR’s 2022 plans, but thankfully they did and now it's on for 2022 as TMR will do more drilling to prove out the “Blue Vein”.

TMR’s gold project has historically produced over 230,000 ounces of gold and TMR is now trying to expand on this historic resource to try to get the project back into production with the gold price trading near all-time highs.

For the project to be put back into production, TMR either had to make new discoveries, or extend the known resource area.

The new “Blue Vein” discovery was made in September last year when TMR accidentally stumbled across this new mineralised “vein” system.

Drilling was actually trying to extend the SW Vein (The vein where the 230,000 oz. had been mined from) but after hitting 33.7/gt of gold TMR officially announced a new discovery.

TMR in the announcement also flagged that they are still waiting on a further five drill holes, two of which were testing the new “Blue Vein” discovery. We are hoping these drill-holes bring more of the same - high-grade gold intercepts that make the discovery that much bigger.

In our 2022 Investment memo for TMR, we set some clear and concise objectives that we wanted to see TMR achieve in 2022.

Below is a snapshot of these: 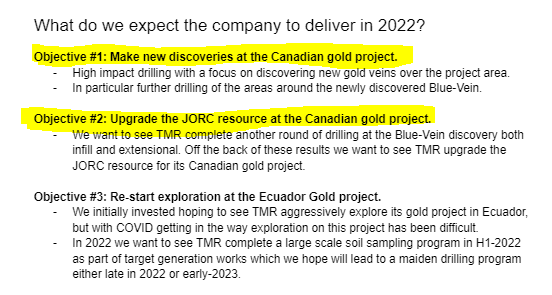 Yesterday’s results to us are a clear step in the right direction towards meeting two of our three objectives in 2022.

With the “Blue Vein” discovery looking like it is growing in size, we are hoping that this will lead to an increase in the JORC resource for the project overall.

Central to our investment thesis is for TMR to make new discoveries and then quickly put them into production by restarting the existing processing plant. Yesterday’s results show that TMR is executing on this and that the “Blue Vein” may be what the company needs to restart production at its Canadian gold project.

What do we want to see next at TMR’s Canadian Gold project?

With the drilling window in Canada shut up until at least ~April we don't expect any further drilling unless those permits for underground drilling can be sorted.

Even if the permits are granted we doubt drilling can start before the drilling window opens up again.

We will now be watching closely to see how the next five assays look (two of which are targeting extensions to the “Blue Vein”).

We want to see some more high-grade gold averaging over ~4-5g/t gold and hopefully some indications that the “Blue Vein” discovery is getting bigger along strike.

TMR’s Canadian gold project has historically produced ~230,000 oz. of gold, the focus of all the drilling TMR is doing here is around trying to extend the historically mined zones and most importantly to make new discoveries.

Yesterday’s results show that TMR is making progress on this front.

First on the assays from the drill holes that were targeting the new discovery - “Blue Vein”.

The first of the assays returned from the drill-hole EZ-21-25 (one of the 4 drill holes we mentioned we were eager to see the results from in our last article) was one of the most promising from this newly discovered vein to date.

The results show that the drill-hole intercepted 2.7m @13.4g/t gold from a depth of 111m. Most importantly this included a narrow 0.5m section within this intercept of 71.3g/t Gold.

The natural response to this from the market might be that the intercept is too narrow, but this part of Canada is well known for its gold projects sitting on several of these vein-type systems.

Grades like 71.3g/t gold are not something you see very often and even at depths of several hundred meters, these can be economically mined. TMR’s high-grade intercept is only from a depth of 111m making the “Blue Vein” discovery all the more interesting. 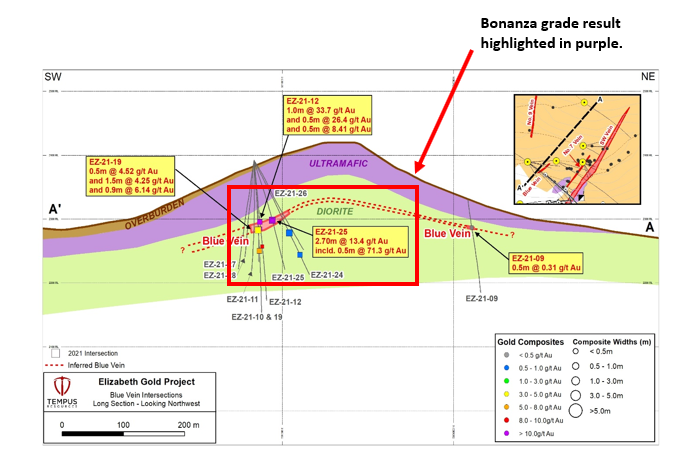 The second assay was from a drill-hole done a little bit further to the north-east of the bonanza grade intercept.

EZ-21-24 returned several narrow intercepts ranging between 0.58g/t and 0.84g/t Gold at depths between 139.8m and 181.7m. Not the sort of grades we want to see along this new discovery but a positive sign that there may be some more gold at depth.

TMR has now proven strike length of ~380m and the Blue Vein structure is being intercepted at depths of ~100m. Notably the vein remains open along-strike and at depth, which makes future drilling programs all that bit more exciting.

With the assays received yesterday the Blue Vein discovery is becoming more and more indicative of a SW-vein style discovery (The vein where 230,000oz was produced in the past).

But before we get into the similarities between the two veins we should summarise the other assays included in yesterday’s announcement.

Yesterday’s announcement also included an assay of the step-out extensional drilling at the SW vein which also returned gold with results of:

Both of these were “step-out” drilling which basically means TMR are drilling to see if there are any extensions to the known gold mineralised areas.

Encouragingly both were successful in intersecting the SW-Vein in previously undrilled zones, extending the mineralisation by ~80m along strike to the north-east. 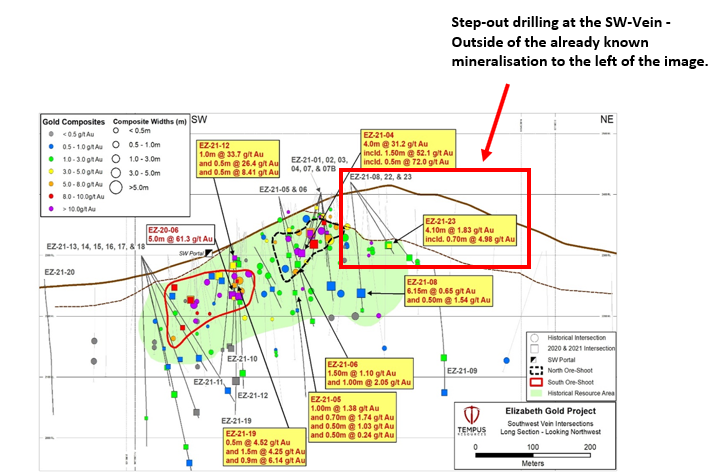 Although these results were of lower-grades vs the intercepts made at the Blue Vein discovery.

A continuation of gold mineralisation along-strike is a good result from these higher-risk step-out drill-holes.

When doing step-out drilling like this, hitting some sort of mineralisation is never a bad thing because it can give the company a better understanding of the ore-body and massively increases the chances a continuation to the vein systems can be found.

What do we want to see next?

As part of our 2022 investment memo for TMR we have set certain objectives we want to see the company achieve throughout the rest of 2022.

With the drilling season ended for the Canadian winter which runs through to ~April we aren't expecting any new drill-program announcements unless the underground mining permit applications are granted (which we touched on in our last article).

That of course doesn't mean there won't be anymore news from the project.

In yesterday’s announcement TMR also flagged that they are still waiting on a further five drill holes, two of which were testing the new “Blue Vein” discovery. We are hoping to see more high-grade gold in these upcoming assays.

As TMR waits for the winter months to pass in Canada it is also encouraging to see that they are looking to restart exploration works at their gold project in Ecuador.

TMR recently announced the “phase 2 exploration program” which will involve heaps of geochemical sampling which will follow-up on the geophysical surveys that were run during phase 1 exploration activities.

We had set this as objective #3 in our investment memo so we are delighted to see the company go back in for some target generation work at the project. 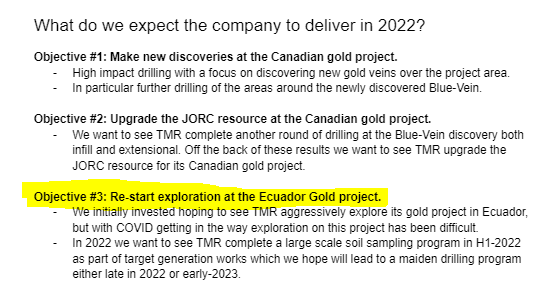 Could the new Blue Vein be a replica of the SW-Vein?

In our last article we started to think about whether or not the Blue Vein was similar in any way to the SW-Vein which was responsible for the 230,000 Oz of gold that was produced in the past.

After-all we are invested in TMR primarily to see them go and make this style of a discovery and then quickly put it into production.

For some context, the current resource at the Canadian gold project is ~298,000 Oz, a SW-Vein style discovery would mean an almost doubling of the in-ground resource.

Of-course this isn’t net to TMR and there are costs associated with pulling it out of the ground but it gives us a good idea of what is being targeted with this new discovery.

Below we have done a side-by-side of the SW-Vein area where there is a ~144 koz resource in place and the “Blue Vein” discovery’s drill results so far.

We think that the drilling results received on this new discovery are promising and are looking forward to seeing TMR back with the drill-rigs ready to test the areas to the left and right of where the high-grade gold keeps popping up.

Below is an image of the parts of the “Blue Vein” discovery we want to see drilled in 2022.

If we continue to see the type of grades that have been coming out to date in these areas, we expect to see TMR go on and announce an upgraded JORC resource which includes the maiden resource for the “Blue Vein”. 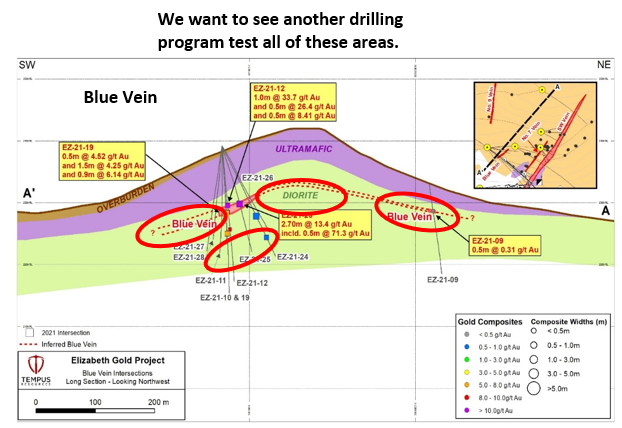 Basically we know what TMR are targeting - a SW-Vein style orebody. All that is left to do is to get the drill rigs on-site and test all of those areas out.

Investment memo and our investment strategy:

We will be using the investment memo to track the progress of TMR over the course of 2022 and use it as the benchmark to then evaluate whether or not TMR is making progress we want to see towards these objectives.

Yesterday's announcement shows that they are now making progress with the first objective and we will be looking out for the next-round of drilling as soon as the winter months are over in Canada.

We are also using our investment memo’s to detail our investment strategy for TMR. Here we mention how we will manage our position in the company and what we plan to do if certain events transpire.

Click here to check out our 2022 investment memo for TMR:

Disclosure: The authors of this article and owners of Next Investors, S3 Consortium Pty Ltd, and associated entities, own 3,320,000 TMR shares at the time of publication. S3 Consortium Pty Ltd has been engaged by TMR to share our commentary and opinion on the progress of our investment in TMR over time.