Disclosure: S3 Consortium Pty Ltd (the Company) and Associated Entities own 8,148,000 TMR shares and 1,716,000 TMR options at the time of publishing this article. The Company has been engaged by TMR to share our commentary on the progress of our Investment in TMR over time.

Our Canadian gold exploration Investment Tempus Resources (ASX:TMR) has just put out the highest grade assay results we have ever seen... again.

This is the highest grade intercept EVER made at its Canadian gold project - eclipsing their previous high of 523g/t announced just a few weeks ago.

TMR also still has 20 more assay results due in the coming weeks.

While the 1,572g/t intercept makes for a thrilling headline, it was only over 0.2m - we think the most important part of the announcement was the 310g/t over a longer 1.05m, which contributes more to TMR eventually achieving our Big Bet for this Investment:

TMR becomes a gold producer following the discovery of enough new gold sources to justify the restart of its onsite gold mill.

NOTE: The above is what we think the ultimate success scenario looks like for this particular Investment over the long term (3+ years). There is a lot of work to be done by the company to get to this outcome and obvious risks which need to be considered, some of which we list in our TMR Investment Memo.

For our summary of TMR’s progress over time and how today’s announcement contributes to our Big Bet see our TMR progress tracker.

With the 30 hole drilling program now completed, we think the upcoming batch of assay results over the next few weeks from TMR will be the most important yet, across the following: 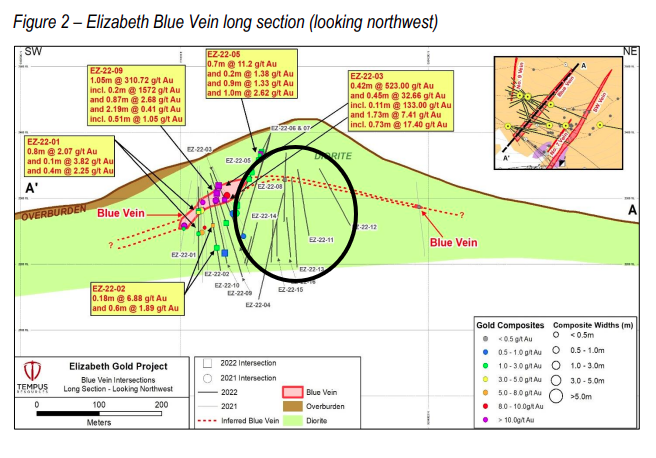 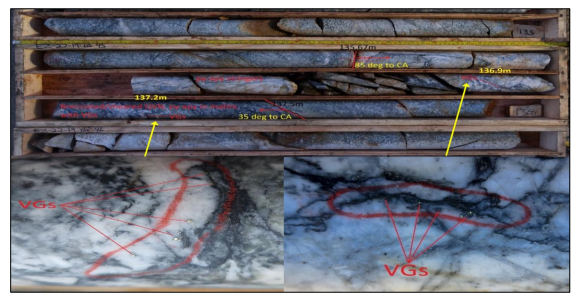 All of this upcoming newsflow is central to TMR’s plan to discover and prove out new gold veins at its gold project, which it plans to feed through its existing processing mill.

With today’s news, TMR is showing continuity at its ‘Blue Vein’ discovery at depth - a step in the right direction to try to prove additional resources to add to its already existing historic resource of ~300,000 ounces of gold.

Sceptics may say, “the intercept thickness is relatively small”, and although this is true to an extent, our view is that it isn't a problem when the gold grades are this high.

This is because of the exploration approach TMR is taking at its project — targeting high grade, vein structures.

There are two approaches to finding economic gold deposits.

A company can target large ore bodies, often with lower grades <1.5g/t, or like in TMR’s case, target high grade stacked veins that come together to make an economic gold deposit.

So whilst TMR’s intercepts are relatively thin to date, the ‘Blue Vein’ discovery is definitely surpassing all of the grade expectations we had set going into the company’s 2022 drilling program.

For some context on the grades, going into this round of drilling we had said anything above 4-5g/t would make it “game on” for the Blue Vein discovery.

Today’s peak assay results come in at 315x the grades that we set as our minimum expectation and almost 46x higher than what the industry considers “bonanza” grades.

Given we are looking for small but high grade zones of mineralisation, this was our main focus point for the assay results.

So far TMR continues to deliver intercepts well above these grades. 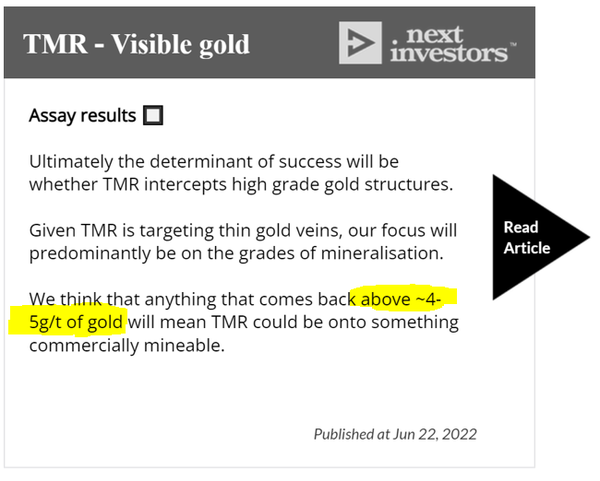 Today, TMR confirmed that its 30 hole drilling program for 2022 is now fully complete.

At the same time, TMR released the assay results from drillhole 4 through to drillhole 10.

TMR still has 20 more assay results to come, but the main takeaways from today’s news was as follows:

The highlight intercept came from drillhole number 9 where TMR returned an assay measuring 310.72g/t gold over 1.05 metres from a depth of only 105.12 metres.

The best part about the high grade zone, is that it came ~20m below previous high grade hits at the ‘Blue Vein’ which is signalling that the vein continues to get thicker at depth.

Below is an image of where today’s intercept is increasing the Blue Vein discovery’s thickness. 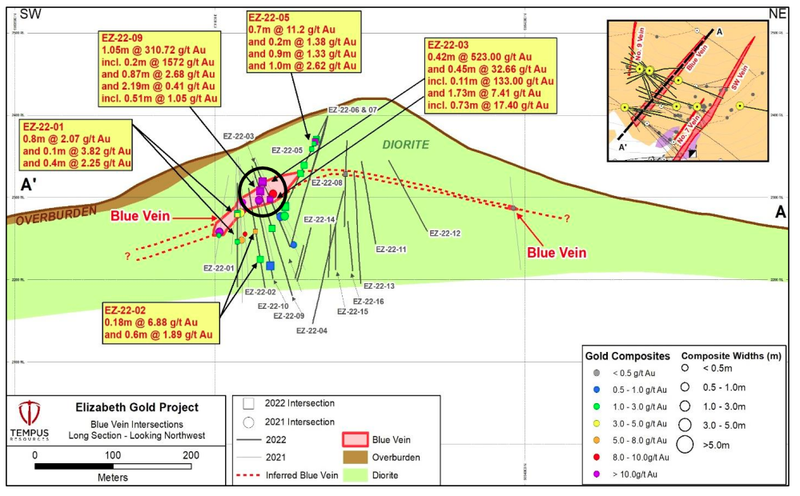 The second bit of good news was that drillholes 5 and 7 also returned high grade gold intercepts, extending the known mineralisation to the north east.

TMR returned the following highlight intercepts across those holes:

The significance of these hits is that TMR now has confirmed high grade gold hits to the north-east of its project.

Below is the image of where the intercepts came from. 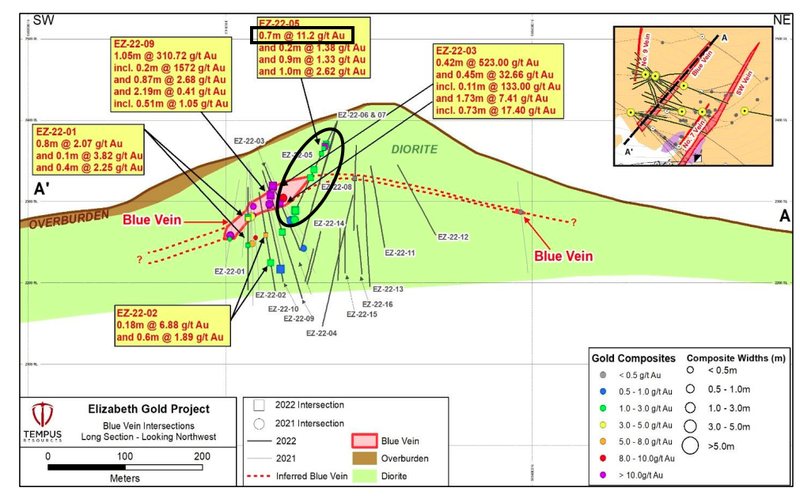 TMR now has assays remaining for 20 of its remaining drillholes which brings us to what we want to see next from the company.

With the first ten assays now released, our attention will be turned on the remaining ~20 assays, which are focused on: 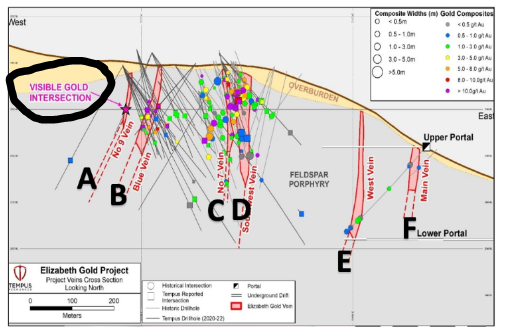 Ultimately, the determinant of success will be whether TMR intercepts high grade gold structures.

We expect that anything above ~4-5g/t of gold will mean TMR could be onto something commercially mineable.

How today’s news relates to our memo

Today’s news sees TMR make more progress towards key objective #1 from our TMR Investment Memo, which is to see the company drill and make new discoveries at its Canadian gold project.

We have also updated our internal “Progress Tracking” document to reflect today's news.

Click here to see our Progress Tracker and that slide.

Below is our TMR Investment Memo, where you can find a short, high level summary of our reasons for Investing.

Disclosure: S3 Consortium Pty Ltd (the Company) and Associated Entities own 8,148,000 TMR shares and 1,716,000 TMR options at the time of publishing this article. The Company has been engaged by TMR to share our commentary on the progress of our Investment in TMR over time.