By 2030 pancreatic cancer will be the second leading cause of cancer death in Western countries.

Poor survival rates are due to severely limited treatment options for patients living with pancreatic cancer and radical surgery is the only current treatment that provides a chance for a cure.

OncoSil has recently achieved a significant regulatory milestone — receiving CE Mark approval for its OncoSil device for the treatment of locally advanced pancreatic cancer (LAPC) in combination with chemotherapy from the British Standards Institute (BSI).

This European CE Marking approval permits OSL to market and sell its breakthrough implantable radiotherapy treatment for pancreatic cancer in the European Union and the United Kingdom.

European CE Marking approval is a major inflection point for OSL — it de-risks the company, allowing it to market and sell its breakthrough implantable radiotherapy treatment for pancreatic cancer within the EU and the UK.

With the OncoSilTM device now approved for commercial sale in Europe, OSL has also filed for multiple registrations in key ASEAN and APAC markets that recognise CE Marking certification.

The OncoSil device has also been officially classified as a “breakthrough device” under EU Medical Device guidance. In addition, in the US it has received Breakthrough Device Designation from the US Food and Drug Administration (FDA).

The company is on a clear commercialisation path, targeting first EU sales later this year. 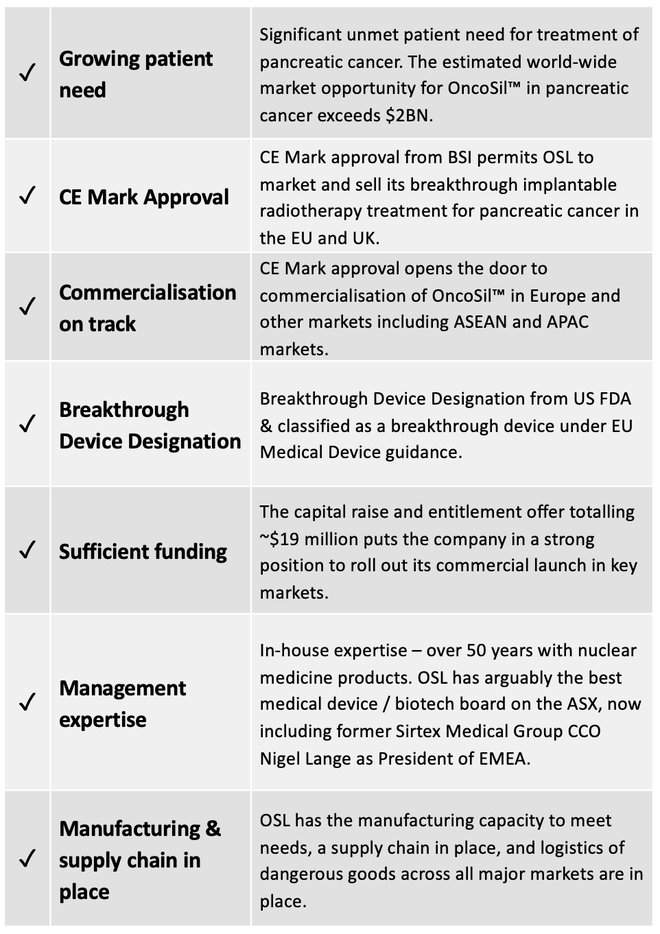 It is a single-use brachytherapy device that implants a pre-determined dose of beta radiation directly into cancerous tissue to deliver more concentrated and localised beta radiation compared to external beam radiation.

The beta particles emitted by OncoSilTM travel a short distance in the tissue causing damage to cancer cell DNA, which renders them incapable of further cell division and proliferation.

The device is used for the treatment of pancreatic cancer and is intended for locally advanced, unresectable pancreatic cancer (LAPC), in other words, patients who are unable to undergo surgery to remove their tumours due to either tumour size, or the location in the pancreas.

For further background on OncoSil read our in-depth initial article:

The company has a clear path to first revenues in Europe: 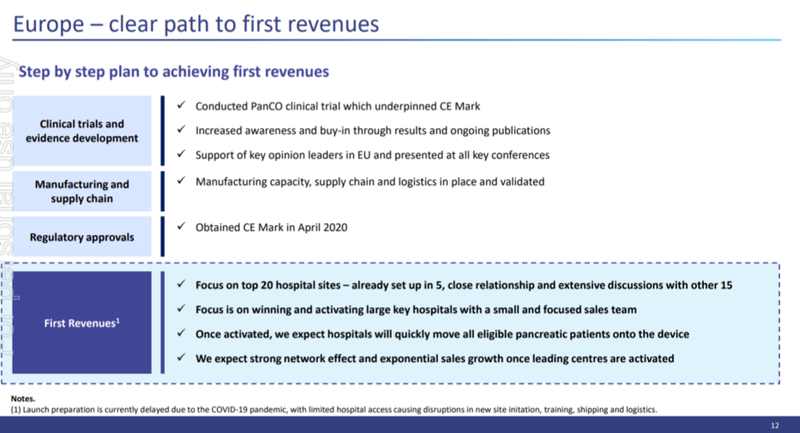 Lange has over 30 years’ experience in the medical devices industry and a demonstrated track record of success in commercial leadership roles and will help position OncoSil as a major player in the pancreatic cancer treatment space..

Furthermore, on 31 March, Karl Pechmann was appointed as Chief Financial Officer and Company Secretary. Pechmann was previously CFO and Company Secretary of a regulatory technology company, Kyckr Limited (ASX: KYK). Other prior roles include Finance Director with ASX listed biotech company, Immutep Limited (ASX: IMM) and he has held senior finance roles at both ASX-listed and multinational organisations.

As mentioned, on 1 April, OSL announced that it received CE Mark approval from BSI for its device for the treatment of locally advanced pancreatic cancer in combination with chemotherapy.

This first approval is a major milestone for OncoSil and allows for the OncoSilTM device to now be marketed and sold within the European Union and the United Kingdom.

This is puts the company’s commercialisation strategy in full swing, as outlined below:

The CE Marking approval was achieved based on the compelling clinical outcomes from the PanCo study.

The international multi-institutional PanCo study was conducted across 12 sites in Australia, UK and Belgium to further investigate the safety, efficacy, feasibility and performance of the OncoSilTM device when implanted intratumorally in patients with non-resectable locally advanced pancreatic cancer (LAPC).

The key data from PanCo was presented at American Society of Clinical Oncology (ASCO) in June 2019.

The OncoSilTM device was shown to provide a valuable treatment option in an area of high unmet medical need with an acceptable safety and tolerability profile.

Treatment with the device was associated with a reduction in both the size and the fibrosis of tumours along blood vessels — a finding not seen in study participants undergoing chemo-only regimens.

- There were no serious safety concerns.

In addition to CE Marking approval, the OncoSilTM device has now been officially classified as a “breakthrough device” as defined under EU Medical Device guidance.

In the EU, a “breakthrough device” is defined as one that delivers clinical benefit to patients for unmet medical needs which are life threatening and for which current medical alternatives are insufficient or carry significant risks.

The OncoSilTM device is now officially designated as a breakthrough device in both the EU, and the UK as well as the US.

In the USA, an early path to market has opened.

Also, on 18 March, the US Food and Drug Administration (FDA) granted Breakthrough Device Designation to OncoSilTM device for the treatment of unresectable, locally advanced pancreatic cancer in combination with systemic chemotherapy.

The granting of this designation is infrequent for new drugs and devices and will likely materially accelerate OSL’s path to US revenues.

In 2019, just 26 drugs were given Breakthrough Designation and of these, 12 were supplements for new indications of already approved drugs. Of the 14 new drugs, nine were for oncology indications.

While Breakthrough Designation is not common, the benefits however, are significant.

OSL will have priority access to FDA consultants during the design of the clinical trial as well as expedited meetings with the FDA and a range of concession in order to fast track the approval process.

The company will still be required to conduct a clinical trial in the US, but there is now potential for an accelerated approval based on a review of interim data.

The US is a huge addressable market for OSL and of the approximately 48,000 new cases annually of pancreatic cancer, an estimated ~42% are unresectable, locally advanced and may be suitable for the OncoSil device, once approved.

The broker stated that “Wilsons move further OVERWEIGHT following the grant of CE Mark for OncoSilTM with a new price target of $0.43 per share”.

This was a significant premium to the share price at the time of 17 cents, implying a 152% 12-month return.

This price target was lifted by 43% to $0.43/share as Wilsons ‘de-risked’ the granting of CE Mark in its valuation. It sees further upside available this year as US market access under HDE and as the company’s pivotal clinical trial plans are confirmed.

The report stated: “The clinical data that supports OncoSilTM has continued to improve in terms of patient survival, and changes to the European medical device approval process has been a systemic challenge for developers over the last 12-18 months.“

It added: “This [CE Marking] is the product’s first major market approval and serves as strong validation of the therapeutic concept.”

Wilsons identifies the next major clinical catalyst as “the finalisation of pivotal trial plans with FDA and the start of the formal US approval campaign.”

The full report from Wilsons is available HERE.

Prior to the above Wilson’s report, in mid-March, Bell Potter released a report following OncoSil’s Breakthrough Device designation in the US.

Bells retained its Speculative Buy recommendation and raised its valuation to $0.38 from $0.30 — even before CE Marking had been granted. This was a significant premium to OSL’s share price at the time of $0.12.

The broker said: “In our view the awarding of breakthrough designation together with the clinical data from PanCo significantly increases the likelihood of a US approval. For these reasons we have lowered the risk rating attached to future US revenues.

“Accordingly, the valuation which is based on a DCF is increased to $0.38 from $0.30 and we maintain our Buy (Speculative) recommendation. There are modest changes to earnings associated with a delay to the product launch in Europe and incorporation of expected clinical trial costs.

The full report is available HERE. 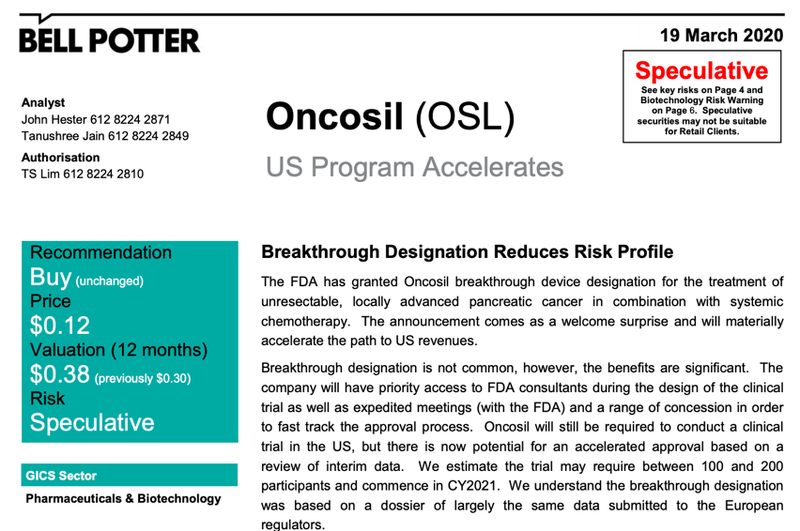 The recent CE Mark approval for the OSL’s OncoSilTM device and the recent capital raise helps de-risk the company and puts the company’s commercialisation strategy into full swing.

The company’s strengthened capital position and clear path to revenue generation means this may be a beneficial time for new investors to look into OncoSil. While the share price did initially spike on the CE Marking approval, it has since pulled back reflecting the uncertainty around timing due to COVID-19, so could now provide a good long-term entry price given the company’s clear path to first revenues.