What does this company do?

This investment is in the near term drilling of a large offshore gas prospect in the North West Shelf in WA.

This region is home to some of Australia's biggest ever gas discoveries and ~47mtpa of liquefied natural gas (LNG) processing infrastructure.

The Sasanof Prospect has a 7.2 Tcf gas and 176 million barrels of condensate 2U (Unrisked mid-case) prospective resource, meaning it is one of the biggest oil and gas wells drilled in Australia by an ASX junior explorer in recent decades.

Drilling of the Sasanof-1 well is scheduled to commence in May 2022 (a few weeks away) with the result expected soon after in June.

NOTE: This investment is high risk and the result of drilling will be binary, and will be known in the next two months. Depending on the result we expect the share price could rise OR FALL significantly.

Gas is a very hot topic at the moment. The Russia/Ukraine conflict has exposed the European Union’s reliance on Russian gas imports as its primary source of energy supply, sending gas prices soaring globally.

As a result, energy independence has become priority number one globally.

We expect that this will put pressure on gas prices to rise in the medium-long term.

Why did we invest?

In 2018, Japanese conglomerate Mitsui acquired AWE for $602M. AWE had a ~380 billion cubic feet (Bcf) proved resource, this transaction is a signal of the appetite internationally for Australian gas projects.

What do we expect the company to deliver in 2022?

We want to see the following take place in the lead up to and during the drilling program:

At this stage we will be solely focused on the size of the gas column that is intersected with the following three scenarios which we will use to measure how much of a success/failure the drilling program was.

❌ Forward plan to be put together based on the drilling results.

❌ Prospective resource converted into a resource/reserve.

The Sasanof prospect currently has a prospective resource which means there is no proven oil and gas presence as yet. The JV will be drilling the target to prove there is a working oil and gas system at the project.

There is always a risk that the drilling program fails to find anything and the well is plugged and abandoned without a discovery being made.

✅ Permitting risk (mitigated): All of the permitting for the Sasanof-1 well is already in place.

✅ Funding risk (mitigated): PRM has already raised all of the capital required to fund its share of the well with the cash already having been paid into the joint venture (JV) account.

✅ Technical risk (mitigated): The Sasanof-1 well is to be drilled on trend and updip from the confirmed Mentorc discovery which was identified by its strong amplitude anomalies in 3D seismic data. The Sasanof prospect has also been identified using 3D seismic data, displaying similar seismic amplitude anomalies. Mentorc was drilled three times and has a 2C resource of 378 billion cubic feet + 16.4 million barrels of condensate.

What is our Investment plan? - IMPORTANT

With oil & gas exploration, our usual strategy is to Invest long before the key drilling event and hold while the company de-risks the project (permitting, funding, geological analysis, target selection).

As the company de-risks the project in the lead up to drilling, the share price will typically rise. This is where we look to de-risk our position to be Free Carried into the drilling and drill results.

Our Investment in GLV & PRM is different — the majority of the pre-drill de-risking is already complete, and all that remains is to drill the well in a few weeks time, so this Investment is essentially a “bet” that the well will come in.

This particular Investment is heavily weighted to the actual success of the drilling event, which is a much higher risk than our usual strategy for Investing in oil & gas exploration.

Our Investments GLV & PRM will be farming in a combined 37.5% interest in the prospect based on the following terms:

We took positions in both companies because in early April they had a similar market cap to % project interest ratio. We consider that holding both is a hedge against which company has more tightly held shares and might rise more on a successful result.

If the share price runs up in the lead up to drilling in the coming weeks we will look to Top Slice and hopefully Free Carry.

NOTE: This Investment is unusually close to a binary drilling event compared to our usual strategy, so we have sought and received a once off approval to adjust our usual 90 day trading blackout after a new portfolio addition to be allowed to sell up to 30% of our positions in PRM and GLV after 20 days (prior to the drill result).

But given the short time to spudding we suspect we will be holding a significantly larger than usual position heading into the drill result. We hope drilling will be successful, but are fully prepared for it to fail.

This Investment is high risk and accordingly the position makes up less than 2% of our total small cap Portfolios across Associated Entities.

This Investment suits our risk profile, but it may not suit yours.

Disclosure: S3 Consortium Pty Ltd (the Company) and Associated Entities own 7,000,000 GLV shares, 49,000,000 PRM shares and 11,833,332 PRM options at the time of publishing this memo. The Company has been engaged by PRM and GLV to share our commentary on the progress of our investment in PRM and GLV over time.

Our Past Commentary on PRM and GLV

Yesterday our gas exploration Investments Prominence Energy (ASX:PRM) and Global Oil and Gas (ASX: GLV) reported that over the weekend the drill rig at the Sasanof-1 well had reached a depth of ~2073m with all of the casing down to that depth run and cemented in place.

The update also confirmed that the next stage of drilling would see the rig penetrate the primary target zone, where we hope our Investments drill into a large gas bearing column.

The rig is expected to reach the primary target area between the 2nd and 5th of June which means at some point next week we will know whether or not our Investment has paid off.

In our last note, we set some expectations for the drilling program, to read the article in detail and to see what we want to see from the drilling results check out the note by clicking on the image below. 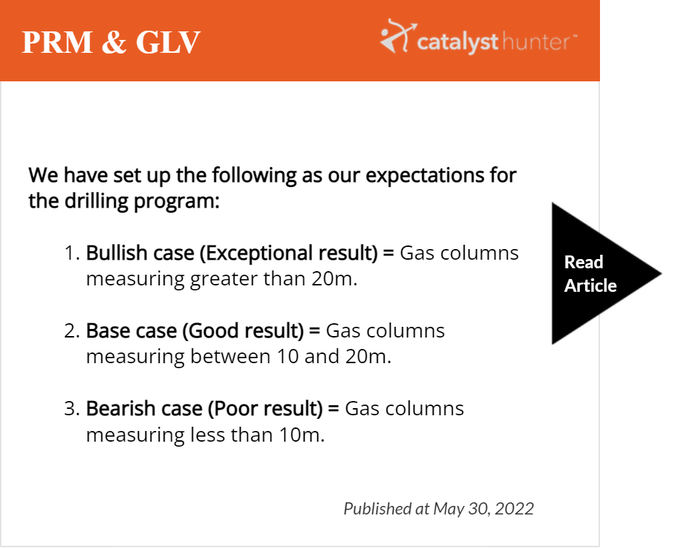 At the same time PRM and GLV both confirmed that the primary anchors were being deployed with a total of 12 anchors to be set up before drilling can start.

Drilling of the Sasanof-1 well is expected to commence at some point this week. 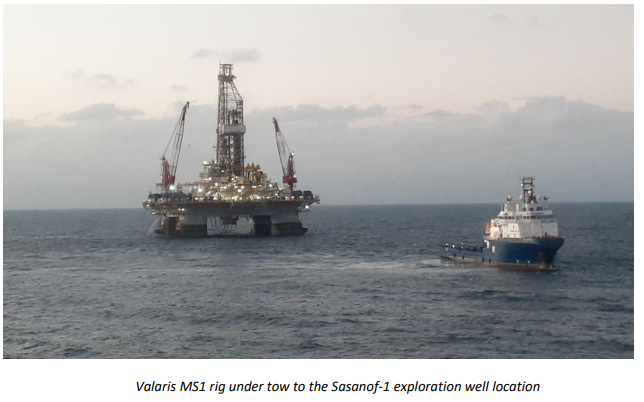 This week Russia declared that it would be cutting off gas supplies to Poland and Bulgaria as of Wednesday.

Off the back of this announcement, European gas futures traded ~17% higher as both Poland and Bulgaria are forced to look for alternate supply routes.

All of a sudden there is an influx of demand into an already tight market, where the Asian countries are already buying up whatever spare capacity of LNG there is on the market.

This quote from Credit Suisse energy analyst Saul Kavonic really highlights this point, “If Russian gas flows into Europe are shut, LNG prices could rise to over $US100/MMBTU as Europe scrambles to suck more gas away from Asia to make up for part of their shortfall”.

As gas supplies increase in terms of strategic importance, the latest investments in our Catalyst Hunter portfolio, Prominence Energy (ASX: PRM) and Global Oil and Gas (ASX: GLV) are preparing to drill one of 2022’s highest impact oil and gas wells.

PRM and GLV have a combined 37.5% interest in the Sasanof Prospect located in the North West Shelf, offshore WA. The North West Shelf is home to ~47mtpa of LNG processing capacity and a supply source for global LNG markets.

The Sasanof Prospect has a prospective resource of 7.2 trillion cubic feet and 176 million barrels of condensate on a 2U basis (unrisked mid case).

PRM and GLV have timed the drilling program to perfection and in the event that a discovery is made, a project with the size and scale of the Sasanof prospect could become of interest to both domestic and international players looking to secure gas supplies.

In our last note we touched on the takeover of AWE in 2018, which made one of Australia’s largest ever onshore discoveries. An indication that when a large gas discovery is made in Australia, it almost certainly pops up on the radar of major players in the oil and gas industry.

To see the key reasons we invested in PRM and GLV, what we want to see from the upcoming drilling program, the risks to our investment thesis and our investment plan check out our launch note here.

Natural gas prices in the US at highest levels since 2008

The impacts of the Russia/Ukraine conflict on oil & gas supply chains seem to be getting worse by the day - natural gas futures in the US trading as high as ~US$8.05/MMBtu overnight - the highest level seen since 2008. 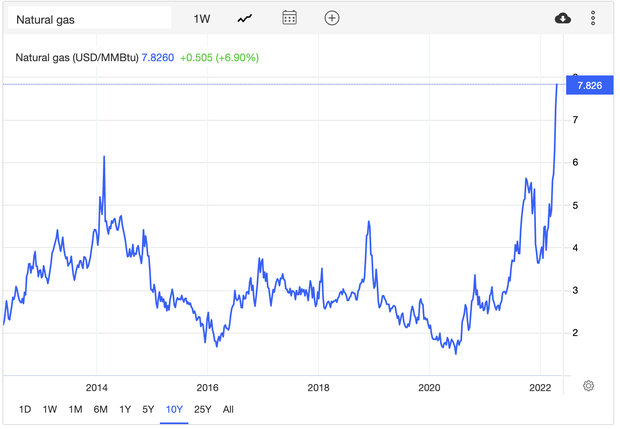 The following article published by CNBC titled “Natural gas surges to highest level since 2008 as Russia’s war upends energy markets” highlighted the fact that US natural gas prices are now up ~108% for the year.

More importantly though, the article made mention of the U.S now exporting record amounts of liquefied natural gas (LNG) to Europe.

The key takeaway for us was that there is now a battle developing between Asia and Europe for spare LNG cargoes - the two continents are locked into a bidding war for whatever spare capacity is available in the market.

With China being a net energy importer and Europe now trying to diversify away from Russian gas (which accounts for ~40% of natural gas usage inside the EU), we suspect that this will create upwards pressure on gas prices globally.

All of this means that demand for new gas supplies globally has never been higher.

Just last week we announced the two latest additions to our Catalyst Hunter portfolio, which are only a few weeks away from drilling one one of the largest oil & gas wells being drilled by an ASX junior in decades.

Our investments Prominence Energy (ASX: PRM) and Global Oil and Gas (ASX: GLV) have a combined 37.5% interest in the Sasanof Prospect located in the North West Shelf, offshore WA. The North West Shelf is home to ~47mtpa of LNG processing capacity and a supply source for global LNG markets.

The Sasanof Prospect has a prospective resource of 7.2 trillion cubic feet and 176 million barrels of condensate on a 2U basis (unrisked mid case). The prospect therefor has the potential to host a resource larger than, or at least rival, the size of discoveries made by oil and gas majors like Exxon, Chevron and Woodside in this part of WA.

To see the key reasons we invested in PRM and GLV, what we want to see from the upcoming drilling program, the risks to our investment thesis and our investment plan check out our launch note here.