As is traditionally the case in Africa, the onset of the wet season has resulted in a hiatus in exploration activity for most mining groups.

However, Mako Gold Ltd (ASX:MKG) has made good use of the downtime, recently negotiating a highly beneficial agreement with Geodrill which will maximise drilling metres and preserve cash during its post wet season campaign.

This is an important development as Geodrill has partnered with Mako’s management team in the past, having drilled on previous discoveries together in Burkina Faso where the Orbis Gold Project progressed to become a major producing mine.

Mako has also been busy on the corporate front, lodging two applications for exploration permits as in Côte d’Ivoire.

We will go on to discuss the highly prospective nature of these permits at a later stage, but it is important to appreciate the significant inroads made by the group at its established targets.

In its relatively short time as a listed entity, Mako has made outstanding progress with its Burkina Faso and Côte d’Ivoire assets, having already announced a gold discovery after its maiden drilling program at the Niou permit in Burkina Faso.

In addition, very encouraging results have been received from three drilling campaigns carried out at the company’s farm-in JV Napié Project in Côte d’Ivoire.

The drilling program at the the 224km2 project resumed today and is designed to follow up on the intersections mentioned above.

In just a short time frame the group has doubled the strike length of the deposit.

Before we dig deeper into these developments, let’s reintroduce... 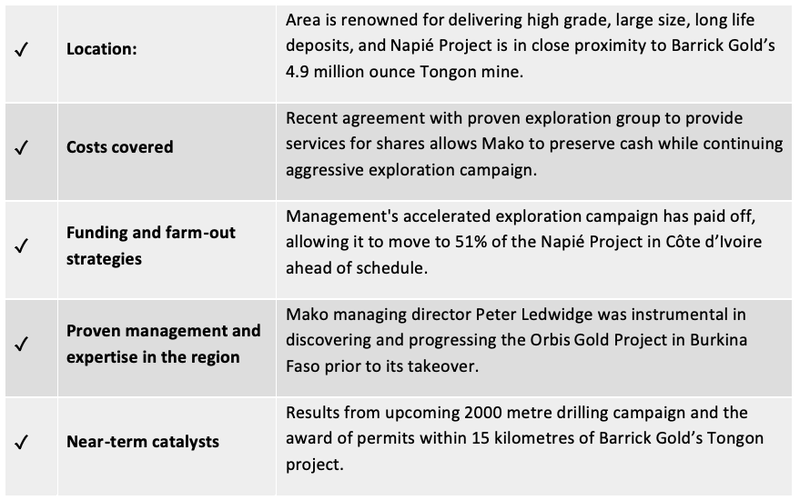 Foundation for success in 2020

As we look toward 2020, Mako Gold (ASX:MKG) will no doubt build on its outstanding early stage exploration success where drilling has yielded robust intersections and strong grades, suggesting that further market moving news could well emerge next year.

We covered Mako extensively throughout 2019 and it would be well worth catching up on our previous articles. In these articles, we have taken an in-depth look at where Mako has come from, its relationship with the $922.7 million capped Perseus Mining (ASX:PRU) and the strong management team leading the company into milestone after milestone.

Last week, Mako released its quarterly report which highlights the broader important developments that have occurred in recent months and the significance they have in providing a platform for the group’s aggressive exploration program.

During the September quarter, Mako reached its first milestone on its farm-in joint venture agreement with Occidental Gold SARL, a subsidiary of Perseus Mining Ltd (ASX:PRU) for the 224km2 Napié Permit. Under the terms of the agreement Mako had up to three years to spend US$1.5 million on exploration on the permit in order to earn-in 51% of the permit.

Management has fast-tracked exploration and reached that milestone in just over one year after listing on the ASX.

As we briefly mentioned earlier, during the reporting period Mako lodged two applications for exploration permits with the Ministry of Mines in Côte d’Ivoire covering a total area of 296 kilometres.

As well as having geological features working in its favour, the northern and southern permit applications are respectively located 15 kilometres and 30 kilometres from Barrick Gold’s 4.9 million ounce Tongon mine processing plant.

The proximity to these can be seen in the map below: 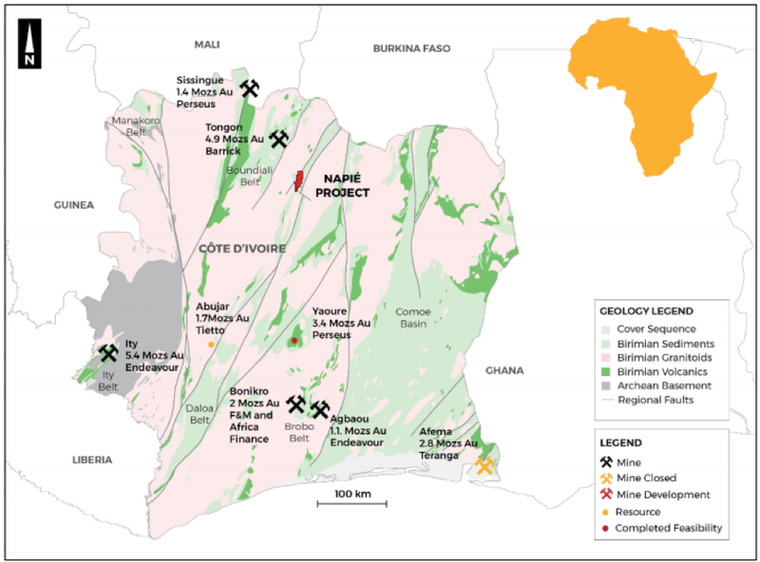 The broader area has a reputation for delivering high grade, large size, long life deposits, and that is what Mako’s experienced management team will be targeting.

Preliminary test work was carried out on 17 samples of primary and oxide mineralisation from the Tchaga Prospect, where Mako is accelerating exploration.

The results are below: 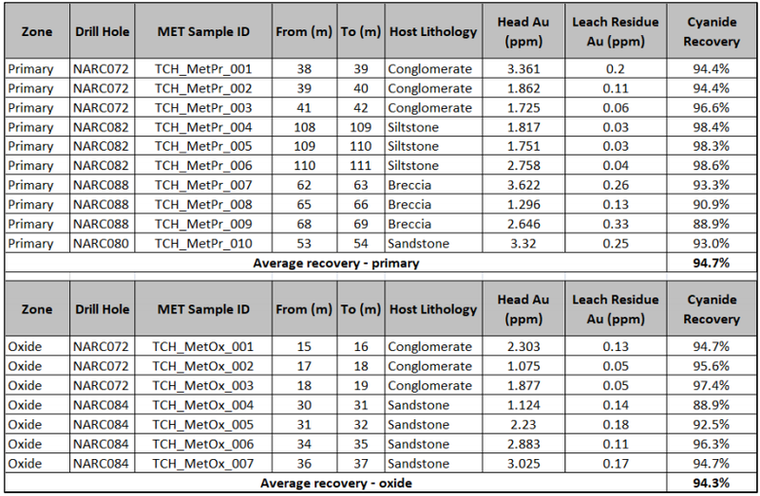 Samples were selected from five reverse circulation holes across the prospect area and from a variety of lithologies in order to test a representative suite of gold mineralised intervals.

Recent results indicated that both oxide and primary gold mineralisation at the Tchaga Prospect are amenable to conventional cyanide extraction methods.

In the following video, Mako managing director Peter Ledwidge comments on the results:

“We are very pleased with the results of the test work, which returned average recoveries of greater than 94% in both oxide and primary mineralisation,” Ledwidge said.

“This reinforces the strategy of advancing the Tchaga Prospect quickly.

“These preliminary positive results de-risk the project one step further and increase confidence in the Napié Project.

“We plan to be drilling again on the Tchaga Prospect shortly after the end of the wet season and look forward to providing updates.”

Establishing a resource estimate could be market moving

Mako planned a follow-up RC drill program on the Tchaga Prospect after the wet season with the near-term goal of advancing it towards a JORC compliant resource.

Management believes that the Tchaga Prospect has the greatest potential for delivering on this, making it the focus of preliminary metallurgical work. 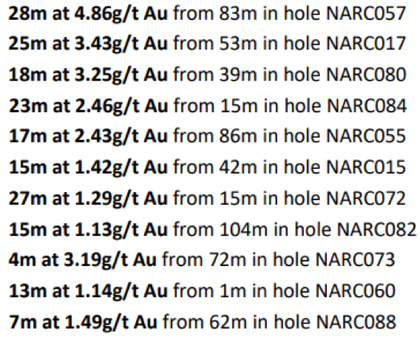 Mako’s objective in completing the upcoming 2000 metre drill program is to add continuity to mineralisation by drilling along strike and below previously reported wide gold intersections, thereby adding confidence to its current modelling of mineralisation at the Tchaga Prospect. 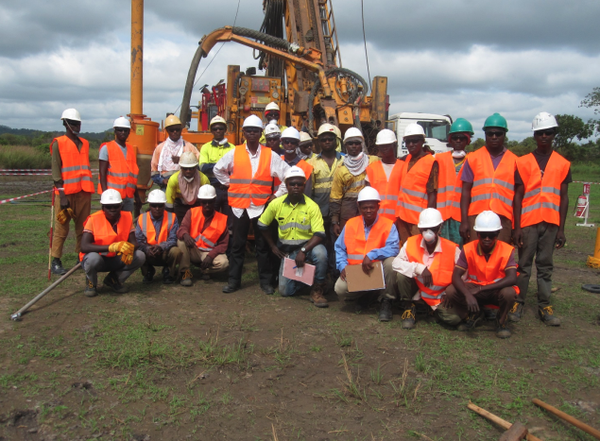 As the following map shows, there is consistency in terms of the clustering of wide high-grade drill holes, and with mineralisation open to the north, south and west there appears to be a strong likelihood of further exploration success.

The high-priority Tchaga Prospect will be drilled, within the one kilometre area which is outlined in red in the following map. 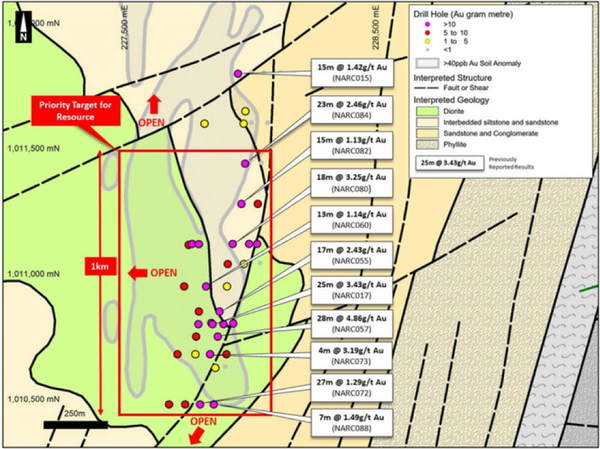 Geodrill, Tietto and other potential catalysts

On 9 October, Mako announced that it had negotiated an agreement with Geodrill which will maximise drilling metres and preserve cash during the upcoming campaign.

Geodrill has partnered with Mako’s management team in the past, having drilled on previous discoveries together in Burkina Faso where the Orbis Gold Project progressed to become a major producing mine.

Orbis Gold made three gold discoveries in Burkina Faso. The Natougou Gold Project / Boungou Mine has been progressed through to production as a world class mine for the $1.3 billion capped Semafo Inc. (TSX:SMF).

The Geodrill/Mako collaboration should have a major impact on Mako’s exploration success in 2020. 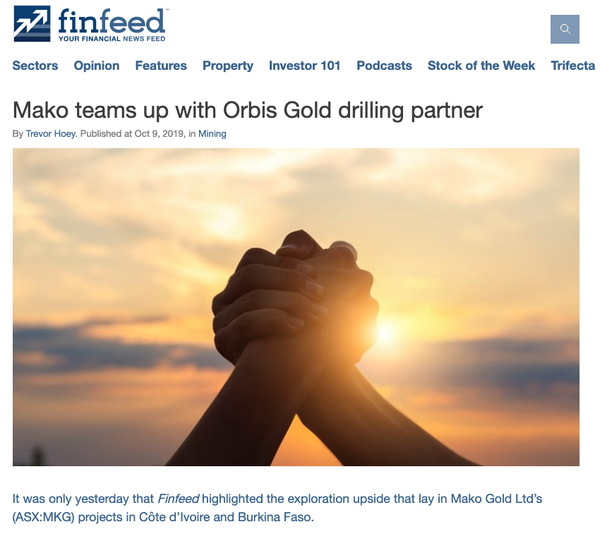 The agreement is extremely beneficial financially, but also because of the established relationship between the companies.

Ledwidge said, “We are extremely pleased to have secured a drill-for-equity agreement with such a high-calibre drilling company.

‘’We have a long-standing relationship with Geodrill and have always been impressed with the quality of their work.

‘’It will be a great endorsement for Mako to add Geodrill to our share register, since they have worked in West Africa for so many years and understand junior exploration companies better than most.

‘’We look forward to continuing and strengthening our relationship with Geodrill, which should be beneficial to all Mako shareholders.”

Speaking of the share register, Mako’s is one of the most tightly held on the ASX. The top 10% hold ~50%, including the $1.1 billion capped cornerstone investor Resolute Mining (ASX:RSG).

The Geodrill partnership should lead to several catalysts, but when you look at other companies in the region, there is further reason to think that Mako could be onto a winner.

Côte d’Ivoire gold explorer Tietto Minerals’ (ASX:TIE) is an excellent example of a company in the region that has weathered several storms to regain momentum and experience significant share price gains.

Tietto listed on the ASX in January 2018.

As news from its exploration activity took time to gather steam, the company’s share price plunged from 24.5 cents shortly after listing to a low of 5.5 cents, against an issue price of 20 cents per share.

Following the delivery of promising exploration results in 2019, the company’s shares have rebounded, now trading in the vicinity of 25 cents. 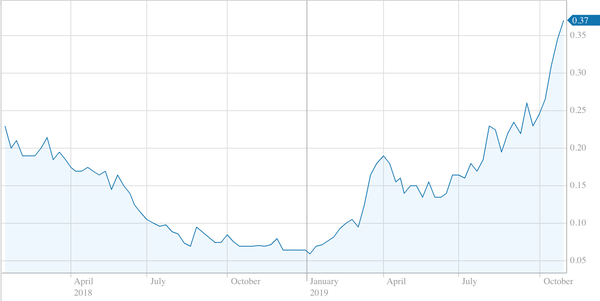 Forward-looking investors who saw the imminent value in the stock at a lower point are now looking at handsome gains.

Mako will be looking to achieve a similar trajectory and if you look at some of the key takeaways regarding Mako, now may be the time to pounce.

A full interpretation of the similarities between the two companies can be found in the Finfeed article below: 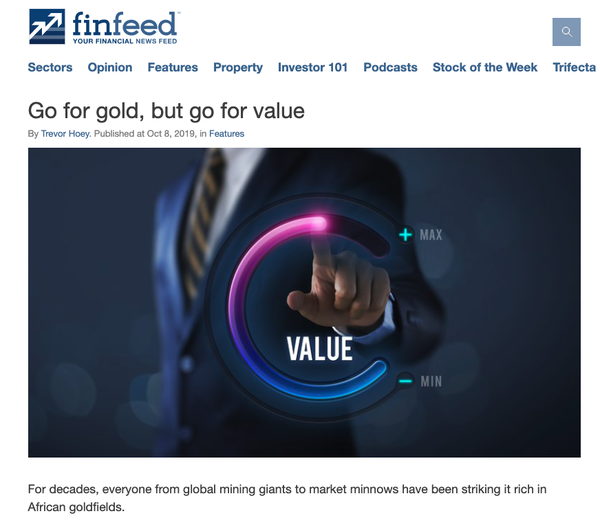 Mako has resumed drilling at the Tchaga Prospect in Côte d’Ivoire.

The near-term goal is to advance it towards a JORC compliant resource.

Its relationship with Geodrill should help it achieve this aim and provide further share price catalysts as drilling intensifies.

The good news for shareholders is this is a comparable story to Tietto, but it should also be noted that the Napié Project is in close proximity to Barrick Gold’s 4.9 million ounce Tongon mine.

All of this points to plenty of upside and Mako is now set to resume its play in earnest.