Two more key events coming out of Europe in the next 48 hours...

Our European battery metals investments Vulcan Energy Resources (ASX:VUL) and Euro Manganese (ASX:EMN) both lifted off the back of the Stellantis EV 2021 day last week, especially VUL who has had a great run so far this week after unconfirmed reports from Reuters about an MoU for an offtake with Stellantis.

The EU and its major auto-makers are belting out key events faster than our small team can cover them...

Two more major events will happen in the next 48 hours that could shape the auto industry as we know it and further impact our investments in VUL and EMN.

As always, we’ll report back with a full rundown of our key takeaways from each event

What is it: VolksWagen will announce its new group strategy dubbed: NEW AUTO - Mobility for Generations to Come. As the future is CO2-neutral and software-driven.

Why it matters: We are watching for any mention of decarbonisation, sustainability, geothermal lithium or high purity manganese that might be relevant for VUL and EMN.

Where to watch: You can tune in here

We don’t exactly know what to expect from VW tonight, but we can guarantee you that we’ll be watching intently for any news that could affect our battery metals investments - VW are revealing their plans to become carbon neutral so expect something interesting to pop out.

In March, VW held its Power Day, giving investors and EV fans the chance to take a sneak peak at VW’s plans over the coming years to scale electric vehicle production. 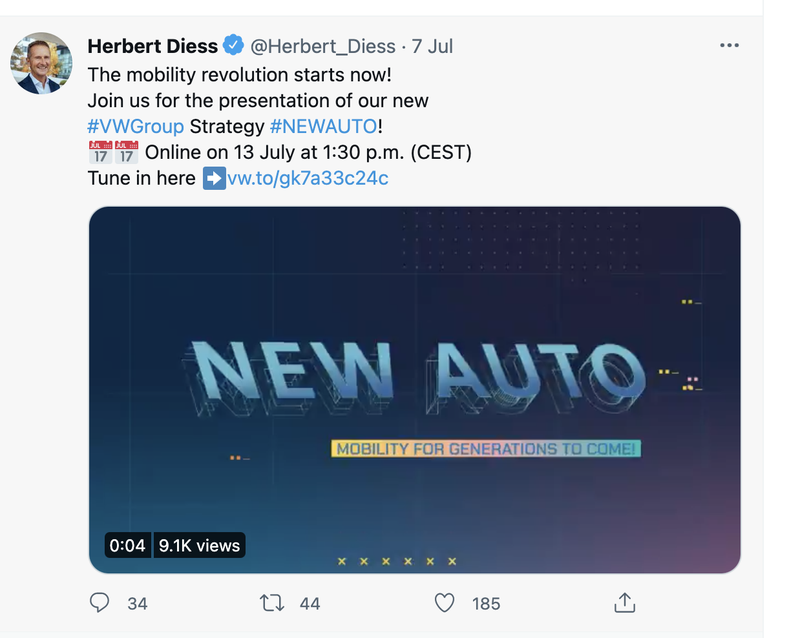 What is it: Dubbed the EU’s “Fit for 55" package, tomorrow night EU leaders will lay out how Europe intends to achieve a raft of ambitious plans to drastically cut emissions by 55% over the next decade.

Why it matters: These announcements will reveal Europe’s ACTUAL action plans covering:

When is it: Tomorrow night

Where to watch: No Live Stream available that we know of yet - keep an eye on mainstream media for updates.

The EU wants to put the 27 EU countries and the European Parliament on track to meet its 2030 goal of reducing emissions by 55% from 1990 levels.

The "Fit for 55" package will be released on Wednesday and will outline just how the EU will try to achieve this.

The EU’s greenhouse gas emissions are mostly made up of transport emissions which are rising. The Commission wants the number of emissions caused by transport to fall by 90 percent by mid-century.

EU officials are mulling whether to set a zero emissions target from 2035 and to boost the existing 2030 target to 60 percent.

We are big investors in the European EV thematic.

As you all know by know, our key investments that all intend to supply EU battery makers over the coming years are:

We will collect the key take-aways for VUL and EMN investors from both VW’s strategy event and the EU’s Fit for 55 announcement.

S3 Consortium Pty Ltd (CAR No.433913) is a corporate authorised representative of LeMessurier Securities Pty Ltd (AFSL No. 296877). The information contained in this article is general information only. Any advice is general advice only. Neither your personal objectives, financial situation nor needs have been taken into consideration. Accordingly you should consider how appropriate the advice (if any) is to those objectives, financial situation and needs, before acting on the advice.

S3 Consortium Pty Ltd does and seeks to do business with companies featured in its articles. As a result, investors should be aware that the Firm may have a conflict of interest that could affect the objectivity of this article. Investors should consider this article as only a single factor in making any investment decision. The publishers of this article also wish to disclose that they may hold this stock in their portfolios and that any decision to purchase this stock should be done so after the purchaser has made their own inquires as to the validity of any information in this article.

Our Top 4 ASX Stocks to Benefit from a Biden Presidency