2021 was a standout year for battery metals stocks with commitments by the world's largest automakers to electrify their car fleets and by governments around the world to facilitate a transition to cleaner energy sources.

After a brief pause in December, markets seem to have picked up where they left off and we hope 2022 will be another bumper year for our investments in the battery metals space, particularly those with a commitment to Zero Carbon projects.

KNI which was spun-out from our 2021 portfolio favourite, Vulcan Energy Resources, is similarly committed to delivering battery metals projects via zero-carbon exploration methods locally in the European Union.

We first invested in KNI in the IPO with the hope that modern exploration technologies could reveal discoveries that historical exploration may have missed.

KNI’s projects sit on grounds with a long history of production where we hope older and now outdated exploration technologies may have missed extensions to these old deposits and/or new discoveries completely.

Our theory is that with the guidance & backing from the team behind Vulcan Energy Resources, any new discoveries could be turned into company making projects.

KNI’s Norwegian cobalt project sits on grounds in a part of the world which was previously the largest cobalt mining region in the world. Any new discoveries here could put the whole region on the map again.

In our 2022 Investment memo for KNI we set 3 key objectives for KNI against which we plan to use to track the company's progress this year.

The first of these was to Identify high priority drill targets through geophysical and geochemical surveys and analysis which is exactly what yesterday’s announcement is all about:

Yesterday’s announcement comes as a sequel to our last note on KNI where we did a deep-dive into the massive EM target that the previous owners of KNI’s cobalt project (Berkut Minerals) missed.

With two additional high priority drill-targets added to the planned 7-hole drilling program in Q2-2022 we thought we should do a deep-dive on these two new targets: 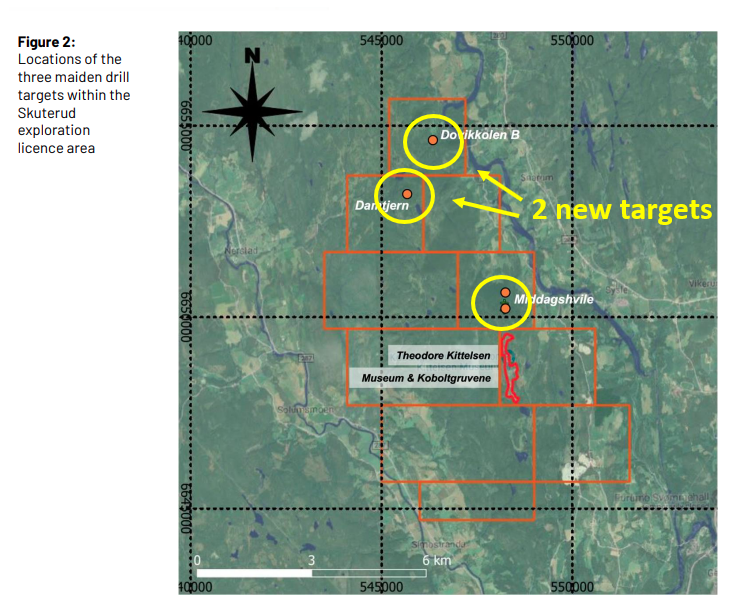 You can see how these look below:

The green blobs in the images above are the conductive anomalies that the modern geophysical surveys have mapped out for KNI. This shows where the rock structures beneath the ground have different magnetic properties from the areas that surround it.

Thinking of people with metal detectors walking along beaches looking for things in the sand, these blobs are 3D images that more advanced radars have managed to map out.

Geophysical surveys are used when defining targets for a reason, these green blobs could be indicating all kinds of different mineralisation. They could represent massive cobalt targets which KNI goes on to make new discoveries from, or it could return nothing.

This is part and parcel of high-risk exploration and the truth will ultimately be in the upcoming drilling program KNI is planning.

As for that drilling, the images also show how KNI plans on testing these targets.

The red lines running through the anomalies represents the planned drilling in the upcoming drilling program where KNI have aimed these straight through the guts of the geophysical anomaly.

Should the initial drilling results turn out to be positive and indicative of a new discovery then the blue-lines are what represent the potential follow-up drill-holes.

Lets not forget the big target we spoke about last year...

In our last note on KNI we did a deep-dive on the massive EM anomaly found right next to where the previous owners of the project (Berkut Minerals) had done some drilling.

The same ‘advanced interpretive analytical’ was done on this target and now we have a slightly better understanding of what KNI are chasing at that prospect.

Below is a side-by-side comparison with the initial results from the Geophysical surveying and the new advanced interpretive analytical works done.

Whereas the initial imaging looks more 2D and less defined, the modern exploration methods applied in the latest round of analysis is defining the targeted anomalies a lot more clearly.

As we mentioned for the 2 new targets, the red lines represent the primary drill-plan, the first of those drill-holes will go straight down the guts of the anomaly on the right and the other drill-hole will test both of the EM targets on the left.

The green lines are also expected to be drilled but we think it will most likely depend on the early indications from the first two drill-holes (In red).

Key Objectives we want KNI to achieve in 2022

We’ve been highlighting our Investment Memos as a great way to familiarise yourself with companies quickly, from a high-level perspective.

Here are the 3 key objectives drawn from our KNI Investment Memo and some commentary from us about how today’s announcement relates to them:

This however is just the beginning for KNI as we wait for them to announce more drilling targets across their other projects (copper, nickel and lithium).

Yesterday’s announcement is less of a direct achievement of objective #2 but it does mean there are more high-priority targets that can be tested in the upcoming drilling program.

The announcement did at least provide us with an expected time for when drilling will start.

Although there was no mention of new assets being acquired in yesterday’s announcement, we are still hopeful that KNI can make some progress on this front through the course of this year.

After today’s announcement you can see KNI is making progress across Objectives #1 and #2.

Geophysical interpretation has yielded two new targets and we now have a firmer timeline on when drilling will commence.

We’ll be using these Investment Memos as a way to assess the company’s progress over 2022 and also examine how our investment thesis played out at the end of the year. We will also update our investment strategy as things progress.

You can catch a quick rundown on KNI, why we continue to hold a position in KNI during 2022 as well as key risks to the investment right here.