Disclosure: The authors of this article and owners of Next Investors, S3 Consortium Pty Ltd, and Associated Entities, own 1,869,878 GAL shares and the Company’s staff own 14,000 GAL shares at the time of publication. S3 Consortium Pty Ltd has been engaged by GAL to share our commentary and opinion on the progress of our Investment in GAL over time.

On the 11th of May, Galileo Mining (ASX:GAL) announced an assay result from one of six drill holes that revealed a major palladium discovery at its Norseman Project in WA (a bit more on rhodium in drill assays further).

The market promptly went nuts, sending Galileo Mining’s share price from 20c to as high as $1.33. After patiently holding GAL for over two years, we are extremely pleased with this result.

Today Galileo Mining announced that the assays of the remaining five drill holes have confirmed that the grade and width of mineralisation at the discovery is increasing towards the east and to the north.

All of today’s results exceeded our pre-discovery “excellent” expectation of 1.0g/t and indicate the potential for a large mineralised system.

These assay results are out earlier than expected and Galileo Mining has also revealed that the next drill campaign has been brought forward to start late next week.

Galileo Mining says the forward plan is to now focus drilling east where it looks to us like the grade and width is trending higher with some more holes to the north too. 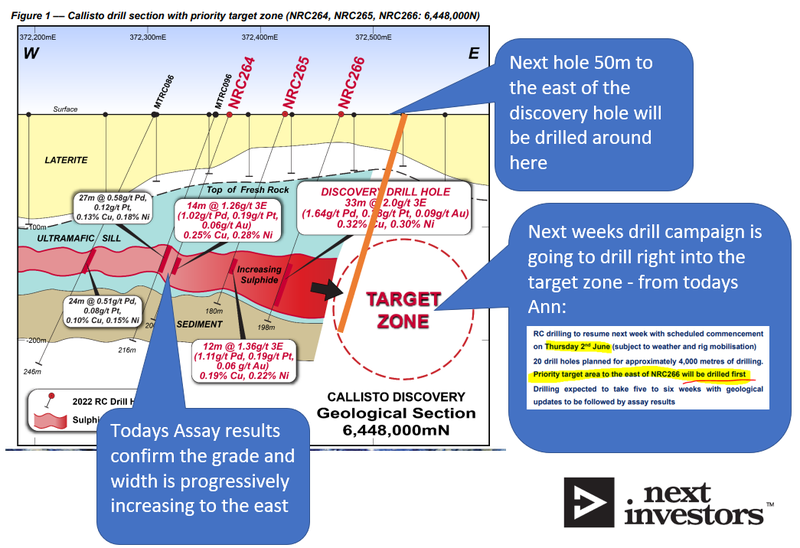 Each drill hole planned is separated in a grid of 50m x 50m. This tells us the company is confident of its discovery and are now drilling in grid format to make calculating a JORC resource easier, rather than trying to “cherry pick” prime areas with EM surveys. 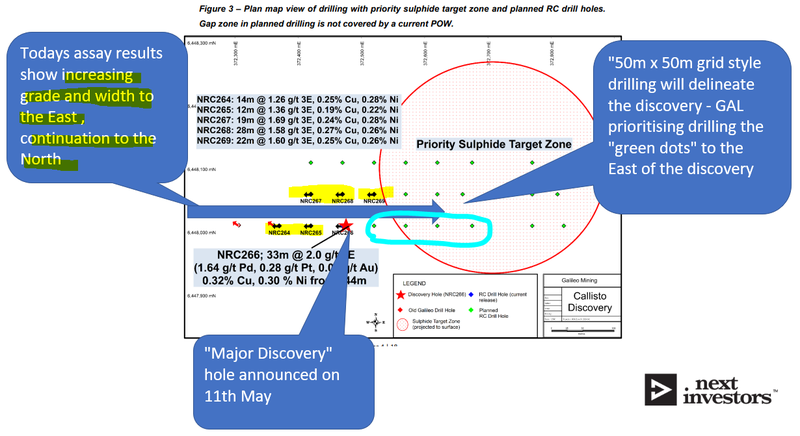 The next few months of drilling out this grid is going to be where we find out exactly how big this major discovery might actually be. While in the near term, we should see results from new holes to the east of the discovery hole.

For us, the best case in the upcoming holes will be an increased or maintained grade; metres of mineralisation is secondary.

Not to mention we are still waiting on rhodium in drill assays which, in our view, would be a bonus and add significant prospectivity.

Today we are going to focus on:

Just two weeks after announcing its major “Callisto” palladium-platinum discovery at Norseman, GAL is back with more good news today — sulphides in a further five drill holes have been shown to also carry high value metals.

These latest assays from recent RC drilling, again arriving earlier than expected, only add to the case that GAL has a large mineralised system on its hands, as the intercepts hitting mineralisation within wider disseminated sulphide zones.

The assays demonstrated strong geological continuity between all drill holes, and confirmed palladium-platinum-gold-copper-nickel intercepts over wide intervals, with the mineralisation and grade extending north and north-east.

Following today’s results GAL is going to keep drilling — an RC rig will be firing up from late next week, with 20 holes across 4,000m planned.

As was the case with the first discovery hole, each of the five drill holes reported today intercepted mineralisation that sits well above our “excellent result” target of 1.0g/t, as outlined in our Investment Memo.

Importantly, these assays suggest that the mineralisation is getting progressively wider and of higher grade as we move further east along strike.

Plus, initial samples are currently in the lab being tested for rhodium in drill assays and other platinum group elements (PGE) metals. Decent assay results from that work could add to significant further prospectivity to the discovery.

Today’s assay results are exactly what we wanted to see ahead of GAL’s upcoming drilling, which will drill right into the priority Target Zone east of the initial discovery hole.

The upcoming drilling programwill focus on drilling across strike to determine the thickest and highest grades in the easterly direction. The same program of drilling will then continue to the north as we aim to move from discovery drilling to advanced and detailed resource drilling.

We’ll be looking for continuing, or increasing, high grades to the east, while we think increased metres of mineralisation would be added upside.

Taking another look at the plan map view above, we can see the pattern of planned holes in the priority Target Zone continuing into that large red circle.

This is where we can expect the real action to be seen — not that the existing grades of 1.0-2.0 g/t intersected were not already impressive.

Drilling is set to commence next week, subject to any unforeseen rig mobilisation issues or bad weather, and GAL has 20 drill holes planned for approximately 4,000 metres of drilling.

These drill holes will continue to be spaced approximately 50m apart with the priority target area to the east of the discovery hole NRC266 to be drilled first.

The intention is to define the grade variation across strike prior to step out drilling along strike to the north. It looks like GAL wants to systematically prepare to define a JORC resource, rather than trying to cherry pick high-grade headline-grabbing results.

GAL has already made a discovery, so drilling in a grid shows they are more focused on delineating just how big it is.

Additionally, GAL is planning for deep diamond drilling later in the year to explore for additional mineralisation below the sediment.

Results from all of the six drill holes can be seen on the plan view map below which shows the holes spaced 50 metres apart. It shows the initial discovery hole (NRC266), alongside the five holes that were most recently assayed. 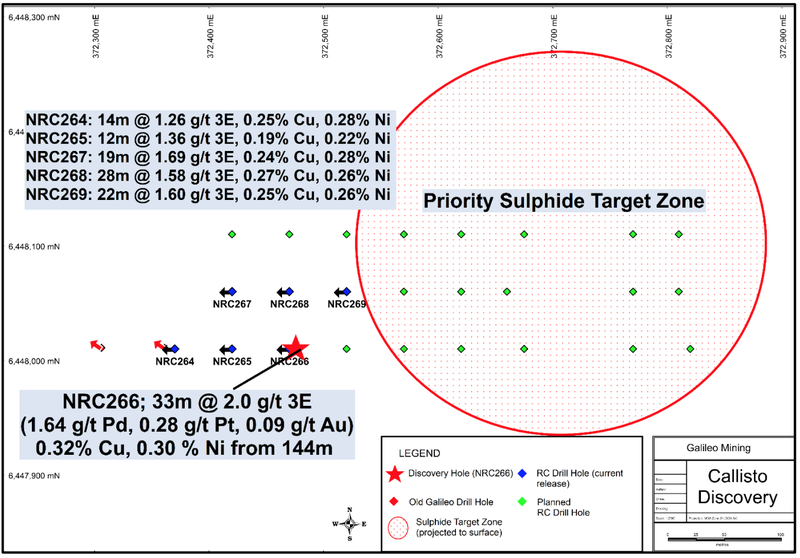 Below is an underground cross section view. Today’s assays prove the trend of length and grade is increasing to the east... so the next easterly holes are going to be the ones to watch: 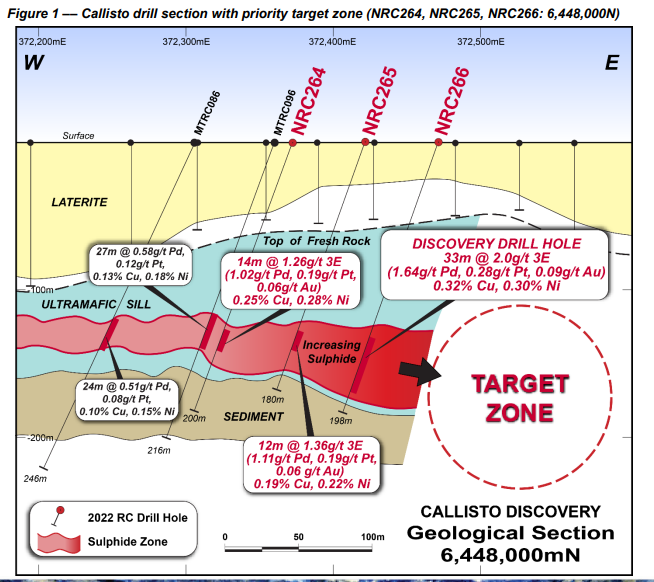 With fast tracked drilling to the east starting next week, here is what we are looking out for.

What we are watching for next for Galileo Mining

To help us prepare to analyse the results from the new drilling campaign starting next week, specifically the east or north-eastern drill holes, we have outlined our own bear, base and bull cases for the result... as well as an “incredible” outlier case.

WARNING: We are NOT geologists nor do we have any direct exploration experience. We think we have been investing in exploration companies long enough to make very rough predictions, but the market may ultimately disagree with us.

(Also, apologies in advance to any experienced geologists about to read this oversimplified prediction of potential results. Apologies also to any map makers or graphic designers out there, we are just doing crude mock ups over the top of today’s announcement, nothing is to a precise scale.)

Generally speaking, For us the best case in the upcoming holes will be an increased or maintained grade; metres of mineralisation is secondary.

We can always dream. Let's start with the “Incredible” case (where we would be rocking back and forth in the foetal position if delivered).

In our opinion, this would be something like 40m at over 3.0g/t.

This is a real outlier case, and the lofty predictions of the “next Chalice” would start becoming reality.

We have dared to dream, and mocked up a (very) rough image of what that next drill hole 50m east from the discovery hole might look like: 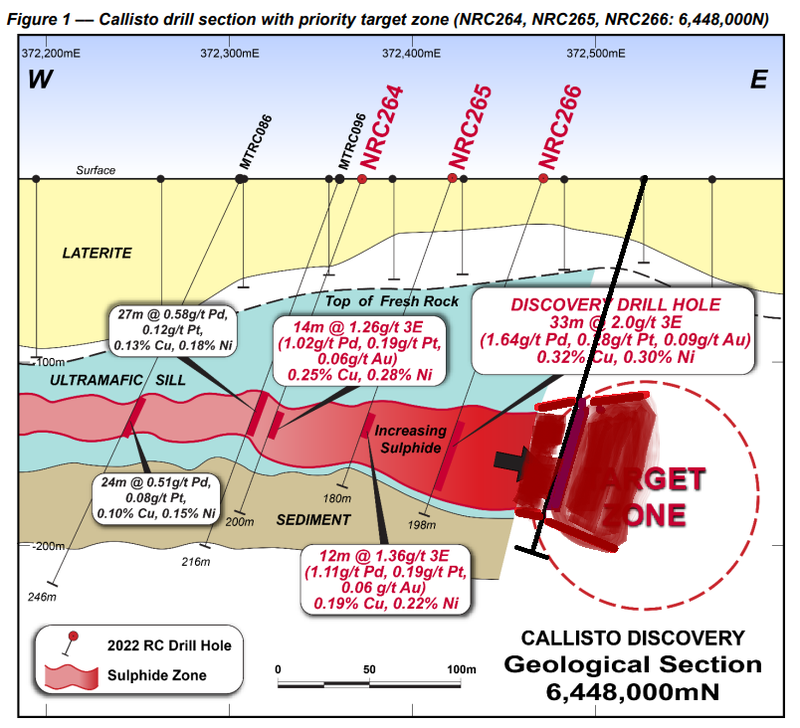 In a bull case, the discovery keeps going, with a trending increase of grade to 2.5 g/t around the same mineralisation length (increased mineralisation metres would be a bonus but of secondary importance). A base case for the next set of assays results would be a continuation of grades above 1.0g/t, with about the same metres of mineralisation.

This would mean the peak grade may have been hit in that first discovery hole (pending no further drill holes in other directions or other targets come up with something). 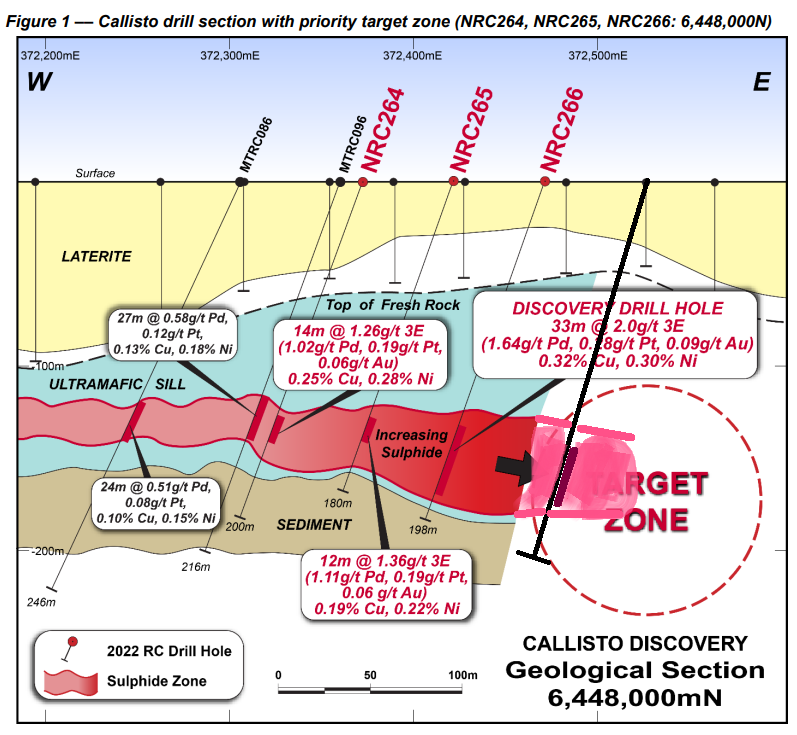 In the bear case, grade drops below 1.0g/t and mineralisation length reduces to the east. In this case GAL would have to go back to the drawing board and come up with a new plan, which might be more testing to the north and north east. 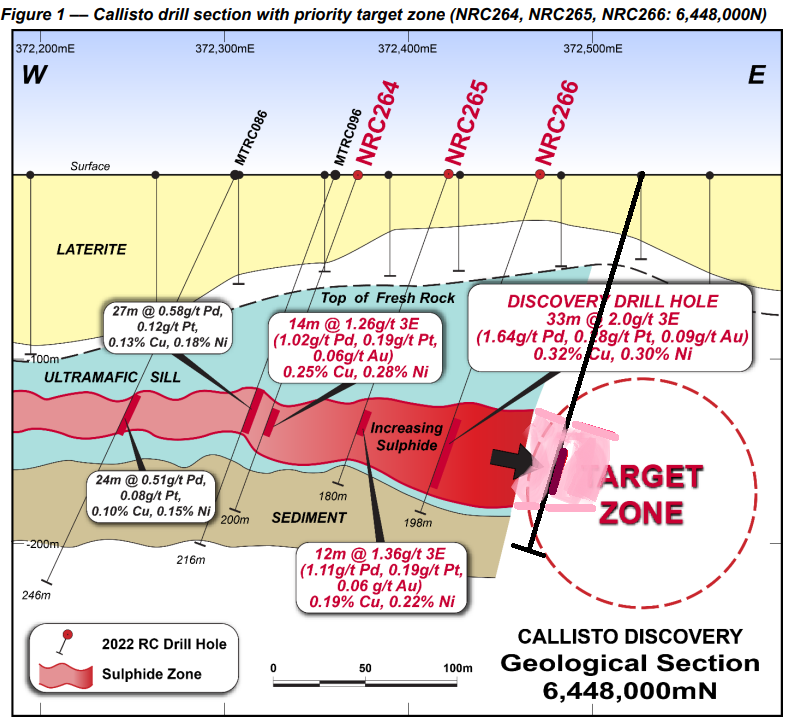 The next round of drilling is due to start next Thursday, 2 June, and is expected to take five to six weeks for the first geological results to arrive from those holes.

We look forward to early reports of mineralisation lengths from core visuals (explorers sometimes announce this if materially observable), however the real proof will be in the assay results which should follow soon after.

Once we have assay results, we will see what case we get with the next batch of GAL’s drilling results.

Also rhodium assays may come in at any time, which will add to the in ground value of what GAL has found.

GAL has been delivering results and drilling ahead of schedule so far — something we always like to see from our Investments.

We are looking forward to finding out just how big and valuable this is. As also mentioned in our last note after the discovery, the Callisto discovery continues to show similarities with South Africa’s Platreef deposits.

And remember that it is still early days for GAL — it controls virtually all of the prospective areas around Norseman and with $8.2M still in the bank at the end of the last quarter, GAL has more than enough to continue chasing its targets with value adding drilling.

Another of the key reasons we continue to hold GAL in our portfolio is because of the high quality management team and the experienced major shareholders backing the company. On that note, since the discovery two weeks ago, major shareholder Mark Creasy has purchased another $1.74M in shares on market — increasing his shareholding to 26.35%. See our Quick Take for more.